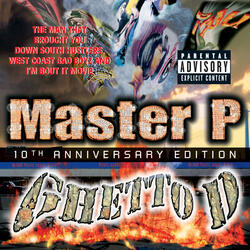 Where them niggas at

Where them niggas at

There them niggas go

Sold a million records not one disc came back

My ghetto niggas got me getting paid like the president

But when I do some gangsta shit, you know I gotta rap about it

I left the dope on the motherfucking table

The feds mad cause we the number one rap label

No Limit records made history in this bitch

And it's a myth on how ghetto niggas getting rich

The whole world say they bout it bout it

I drop this ghetto shit, and get my thug niggas rowdy

My tank dogs coming through, where them niggas at

Ready to hit em, P, pass me them thangs, let me get em

P man, pass me them thangs and let me get em

I be damned if I don't kill a nigga

they shouldn't be fuckin with ya

They don't respect a fucking soldier

They gonna roll or get rolled over, or get fucked over

Now I may be the first to go with, but you best believe

I'm here to protect and serve my tank dogs

and any nigga that fuck with us

Colonel, get ready to go to war, I'm hitting hard

A made nigga, that's why they call me mister Magic

Busting that niggas that try it, Magic and laugh

Nigga I ride for scrilla, hang with dealers

Daddy wasn't home so I rode with them killers

And thug niggas high off hennesey and weed

Tatoos and oz's, invested in CD's

Now the feds want to see me dead

Independent, black owned and teaching other niggas how to get paid

Ran with some gangs, bank for some change

Me and Silkk, see-Murder, we killers

Plus Magic together, a world of TRU niggas

Taking over this rap game

It's No Limit for life, lights out I'm the trigger man

I told y'all, No Limit niggas, we mercenary soldiers.

We don't talk, we don't rap about niggas.

We all about getting our motherfucking paper.

A coward dies a million deaths, but a soldier only dies once nigga.

Ha ha, y'all fake ass niggas, y'all think about it.

Rapping for the motherfucking white folks.

Talk to the niggas I feed nigga if you got problems