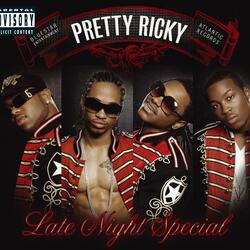 On the hotline, the sun ain't up but I had to call you
'Cause I'm home alone lustin' for ya
I'm in my room, nothin' but a towel on
Take them granny panties off put a thong on
I love it when I hear you moan
You got a sexy tone that makes the dick long
You're in a complete 'nother city
On the fan line with nothin' but a baby tee on
You're the kind of girl that's sexy in some boxer shorts
I'm the kind of nigga that make you ride it like a Porsche
Yeah I met you on myspace
Now I'm 'bout to fly you out to my place, in the morning

Baby girl said she loves phone sex
Say the sound of my deep voice make her wet
You call me 5 A.M. on the dot
Now I'm thinkin' 'bout you with no panties, no top
Picture this, you say you're comin' over
30 minutes later you was parkin' the Rover
Jumped out the car and I met you at the door
3 seconds in the house and your panties on the floor
Kiss you in you mouth and your hips on my cheeks
Straight action on the carpet, rug burns on my knees
Now you're on the phone like damn I made a mess
Got my hands in my pants, man, I love phone sex

Chat About On the Hotline by Pretty Ricky