This Is For The Homies 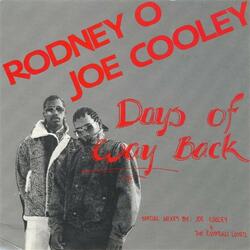 [Chorus 1:]
Clap your hands this evening, come on
(Scratching), this is for the homies(4x)

(Rodney O)
I'm Rodney O and I'm back, on a track that's not wack
And my DJ, Joe Cooley's still on top of the stack
So you can say he's like wine, he's getting better with time
And General Jeff is by my side, to support my rhymes
We clock dollars, not dimes, we rock bells and chimes
And I'm a be -boy 100%, like Moonshine
So listen up everybody 'cause you should not miss
"As we go a little something like this" --> Slick Rick
Well I'm a true blue MC with plenty of pizzazz
Plantin and scratchin is Joe's favorite task
Is he the best? Well there's no need to ask
Take a look at him as he moves fast
As lightnin, and you know what's so damn frightenin?
You others are soft, and you still haven't ripened
Yet, I'm not knockin you, I'm just rockin to
A funky beat that is just cold sockin you
I'n the face, we got pounds of bass
And check it out everybody, Joe Cooley's in the place

[Chorus 1]
(Rodney O)
I brought the microphone, Joe Cooley brought the mixer
I drink Coca-Cola, not hardcore liquor
'cause I'm playin it straight, the homies like the 8
"It's the power!" that makes it taste so great
I'm kickin back in the hood, this beat is kickin real good
If you was kickin it like me, you wouldn't have to ask, would
This bass reflect, the maximum effect
This jam is for the homies, and it's comin direct
Straight from the heart, and I will do my part
This groove has been groovin straight from the start
This is for the homies, and the homegirls too
Joe Cooley, tell them what you want 'em to do

(Rodney O)
I'm gettin straight to the point
Hold a mic, not a joint
Like the end is lit up, so it's Joe and he cuts
Newmark is is brand, all gummies get canned
"This is for the homies!" is the name of this jam
We rock it like an earthquake, we're conquerin states
Rodney O and Joe Cooley doing many tour dates
Dedicating this song, to the homies at home
This beat is on the street wherever you roam
We're household names, in the hip-hop game
So repeat after me, "Joe, scratch that thang!"