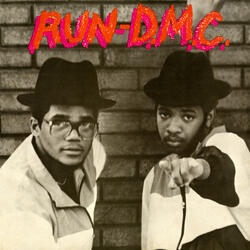 Kick off shoes, jump on the jock
Listen to the Jam Master as he starts to rock
His name is Jay and he's on his way
To be the best DJ in the US of A

J-A-Y are the letters of his name
Cutting and scratching are the aspects of his game
So check out the Master as he cuts these jams
And look at us with the mics in our hands
Then take a count, 1 2 3
Jam Master Jay, Run-D.M.C.

He's Jam Master Jay, the big beat blaster
He gets better cause he knows he has to
In '84 he'll be a little faster
And only practice makes a real Jam Master

We're live as can be but we're not singing the blues
We got to tell all y'all the good news
The good news is that there is a crew
Not 5, not 4, not 3, just 2
2 MC's who are claiming the fame
And all other things won't be the same
Beacause it's about time for a brand new group
Run-D.M.C. to put you up on the scoop
We make the fly girls scream in ecstacy
We rock the freshest rhymes at a party
We put all the fellas in a daze
It's everyone that we amaze
And we got the master of a disco scratch
There's not a break that he can't catch
Jam Master Jay that is his name
And all wild DJ's he will tame
Behind the turntables is where he stands
Then there is the movement of his hands
So when asked who's the best, y'all should say:
"Run-D.M.C. and Jam Master Jay"

Jam Master Jay is the one in charge
It's up to him to rock beats that are truly large
He is the master of the scratch and cut
So move your arms, so move your legs
So won't you move your butt