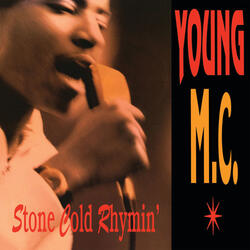 Now I wrote this record for when I perform,
from the nights inside a university dorm,
I put pen to paper with a paper and pen,
for the times I'm rockin' the mic in front of women and men,
I get raw like Eddie, rough like Freddy,
Kreuger with a luger turnin' men into spaghetti,
I'm like Fats Domino, up on Blueberry Hill,
'cause my rhymes are funky fresh not run of the mill,
And like a king has palaces I give an analyis,
You can't talk because you suffer from paralysis,
of the mouth, of the lip, of the tongue, comin' to you complements of a
brother named Young,
Now you can't talk because I'm leaving you speechless,
so be quiet and let an educater teach this,
It's due to my producer, so he's in a rage. And Mike you control the vinyl
I'll control the stage 'cause I come of,

Four score and seven years ago
there were a whole bunch of rappers who were in the know
Four score and seven years later
I dig a hole in those rappers like the moon with a crater
Because they battle me they're really taking a risk,
Cause you're an eight track tape and I'm a compact disc,
And like Tyson drops boxers in rapid succession,
I'm droppin' MCs in the rappin' profession
I'm comin' off, just like the clothes on a hooker,
and I can fly like Jimmy Superfly Snooka,
Like a shuttle goes up into outer space, people's hands go up when I enter
the place,
I don't mean to brag or boast just to tell ya I'm great, but I can rock the
microphone like Dorothy Hammil can skate,
Yeah, I can say a funky rhyme like Greg Luganis can dive, Don't have to be
Saturday night for Young MC to get live 'cause I come off,

Yo I come off, My name is Young MC and baby I come off
Yo the brother's comin' off, Bust this, Here we go

Now one behold, Young MC struck gold,
form the rhymes that I've been sayin' to the young and the old,
From the battles I've been havin' with the smart and the dumb,
From the records I've been makin' with the mic and the drum,
You know the other rappers want to play a game with me,
they run and hide when they hear the name of Young MC,
Like a kid playing tag, that's how it's got to be
so when I start I say Oli Oli Oxenfree,
Yo, you can never write a rhyme as strong as this one,
So pay attention 'cause you don't want to miss one, of my healthy rhymes
nobody's are healthier, New York, New Jersy, LA or Philidelphia,
City to city, and town to town, place to place
country to country, cause I get around
Even if you were in prison you'da heard me play
cause the warden had me rock and I'm on the PA,
So when you get out come and see my show
and if you start static back in you go
'Cause comin' off is the title and the theme of the jam,
and when the rhymes are finally finished people say God damn
cause I come off