How Stevie Wonder Was Key In The Creation of MLK Day

Five days after MLK's assassination on April 4th, 1968, the teen music sensation flew to Atlanta to join thousands to mourn the loss of Dr. King, joining Harry Belafonte, Aretha Franklin, and Diana Ross to pledge they would continue MLK's fight for equality and freedom for everyone. The campaign for the nation to recognize the deeds of MLK with a national holiday began soon after his assassination but it took 15 years and one of Stevie Wonder's biggest songs for lawmakers to finally make it official. Even though Stevie Wonder has 17 Grammy awards, an Oscar and is the third-most top 10 hits after The Beatles and Elvis Presley, he still considers helping to create Martin Luther King Jr. Day one of his proudest achievements.

“I was 5 when I first heard of MLK,” Wonder recalled. Blind since birth, Wonder listened to coverage of the Montgomery bus boycott on the radio. “I asked, ‘Why don’t they like colored people? What’s the difference? I still can’t see the difference. Want to know why? Because there is no difference.” Moved by Dr. King's message, Wonder led the crusade and fought the pushback to create Martin Luther King Day.

While Labor Unions kept the dream of MLK Day alive in the wake of his death, making it a reality seemed bleak even after the union-backed president Jimmy Carter gave it his endorsement in 1979. The Republican-led Congress refused to budge and its leader Senator Jesse Helms of North Carolina considered King a lawbreaker being used by communists.

On his 1980 album Hotter Than July, Wonder included "Happy Birthday," his ode to Martin Luther King Jr. and his call to make MLK Day official. The album included a large photo of MLK with a call to endorse the holiday: “We still have a long road to travel until we reach the world that was his dream. We in the United States must not forget either his supreme sacrifice or that dream.”

The lyrics of the song celebrate King's legacy, and take aim at those opposing the holiday: "You know it doesn't make much sense/There ought to be a law against/Anyone who takes offense/At a day in your celebration."

How a man who died for good

Could not have a day that would

Be set aside for his recognition

Because it should never be

Just because some cannot see

The dream as clear as he

That they should make it become an illusion

And we all know everything

That he stood for time will bring

For in peace our hearts will sing

Thanks to Martin Luther King

After an incredibly successful tour with Bob Marley where Wonder would close each show by leading the audience in singing "Happy Birthday," the cause for MLK was recharged. As Ronald Reagan was preparing for his inauguration, 100,000 people rallied in Washington DC for MLK Day. "As an artist, my purpose is to communicate the message that can better improve the lives of all of us," Wonder told the crowd.  "I’d like to ask all of you just for one moment, if you will, to be silent and just to think and hear in your mind the voice of our Dr. Martin Luther King.” The crowd chanted "Happy Birthday" as Stevie was onstage.

Despite millions of signatures and the backing of many politicians, MLK Day was still being hotly debated in Congress. Coretta Scott King and Wonder both gave testimonies and the bill was finally passed 78 to 22. MLK Day was signed into law in November 1983 but not officially observed until 1986. "The victory was for every human being in the country and in the world,” Wonder said.

Stevie Wonder was awarded the Congressional Medal of Freedom by President Obama, who told Wonder that it was the first record he ever owned. Stevie still performs "Happy Birthday" regularly to spread the message of Dr. Martin Luther King Jr. 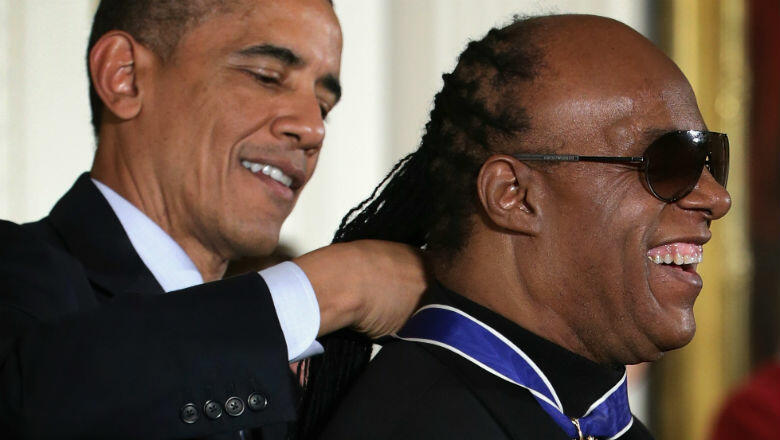