Reginald Kenneth Dwight was born on March 25, 1947. Although he's better known as the legendary musician Sir Elton John. In previous years to celebrate his big day, the icon has thrown lavish and over the top star-studded parties. Last year, he celebrated by revealing the cover and title of his first official autobiography and who knows what the amazing entertainer has in store for us this year. In celebration of the glitter rock pop star turning 73, we’ve gathered some unforgettable moments that will take you back in time!

Scroll below and take a look at Elton John over the years. 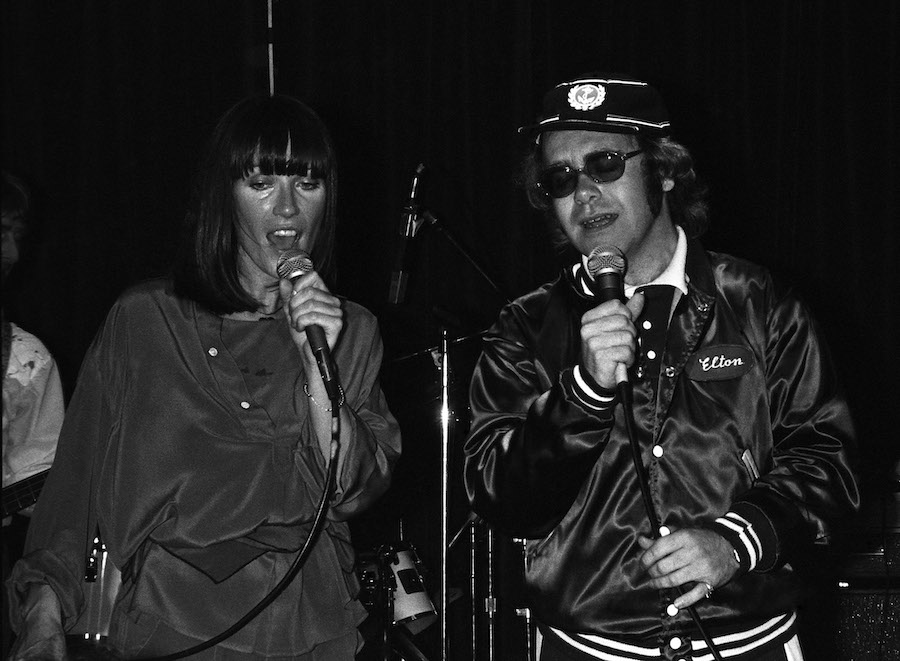 In 1978, Elton John and Kiki Dee performed at Doug Weston’s Troubadour. The Troubadour was the nightclub where Elton held his first US show. It was just the beginning! 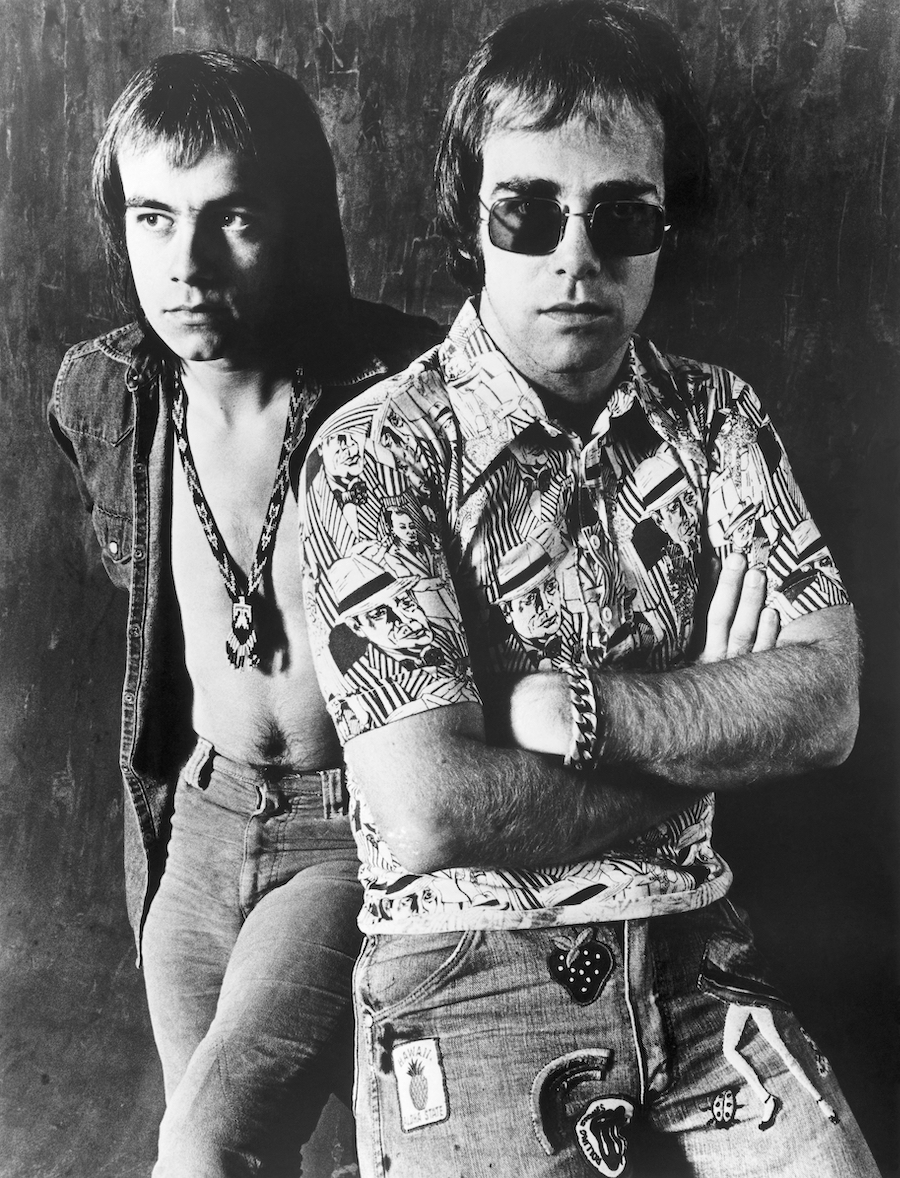 Elton John and Bernie Taupin answered the same talent advertisement placed by Liberty Records. Although neither passed the audition, Elton luckily got a hand of Bernie’s poems. They’ve collaborated on more than thirty albums to date since they first met in 1967. 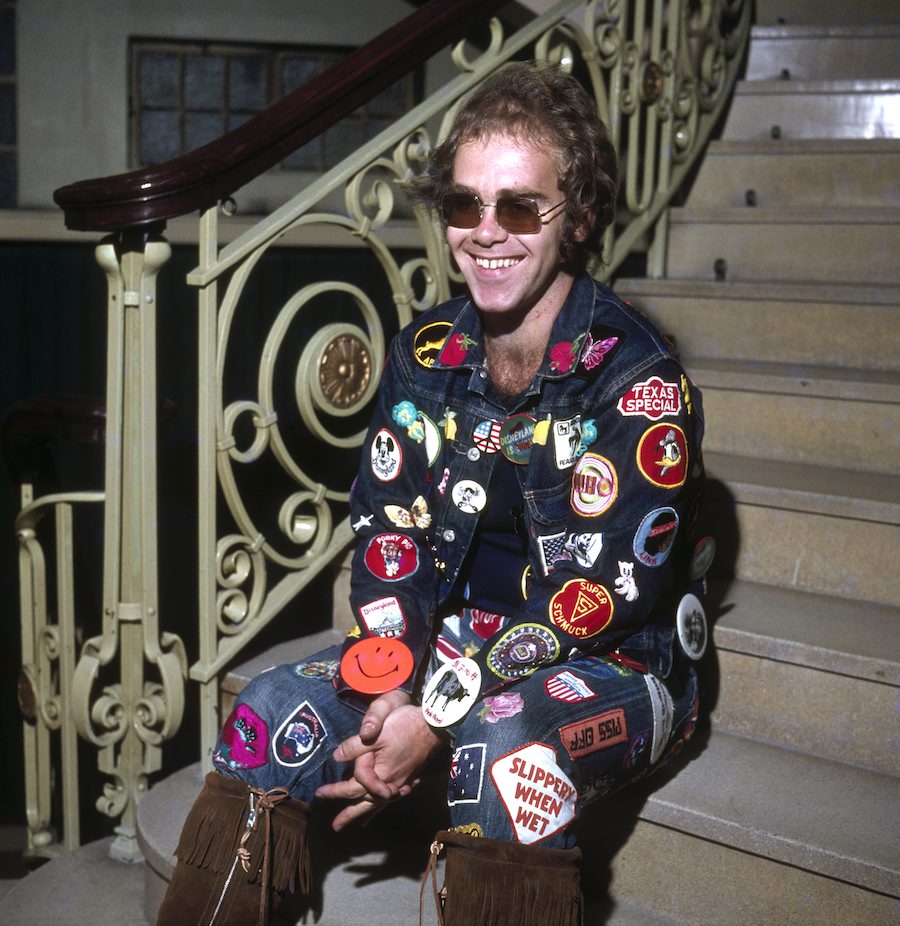 Elton released his mega-hit “Rocket Man” in 1972. Bernie Taupin, Elton’s lyricist, imagined an astronaut bummed out by his banal profession. Safe to say it defined the early seventies. 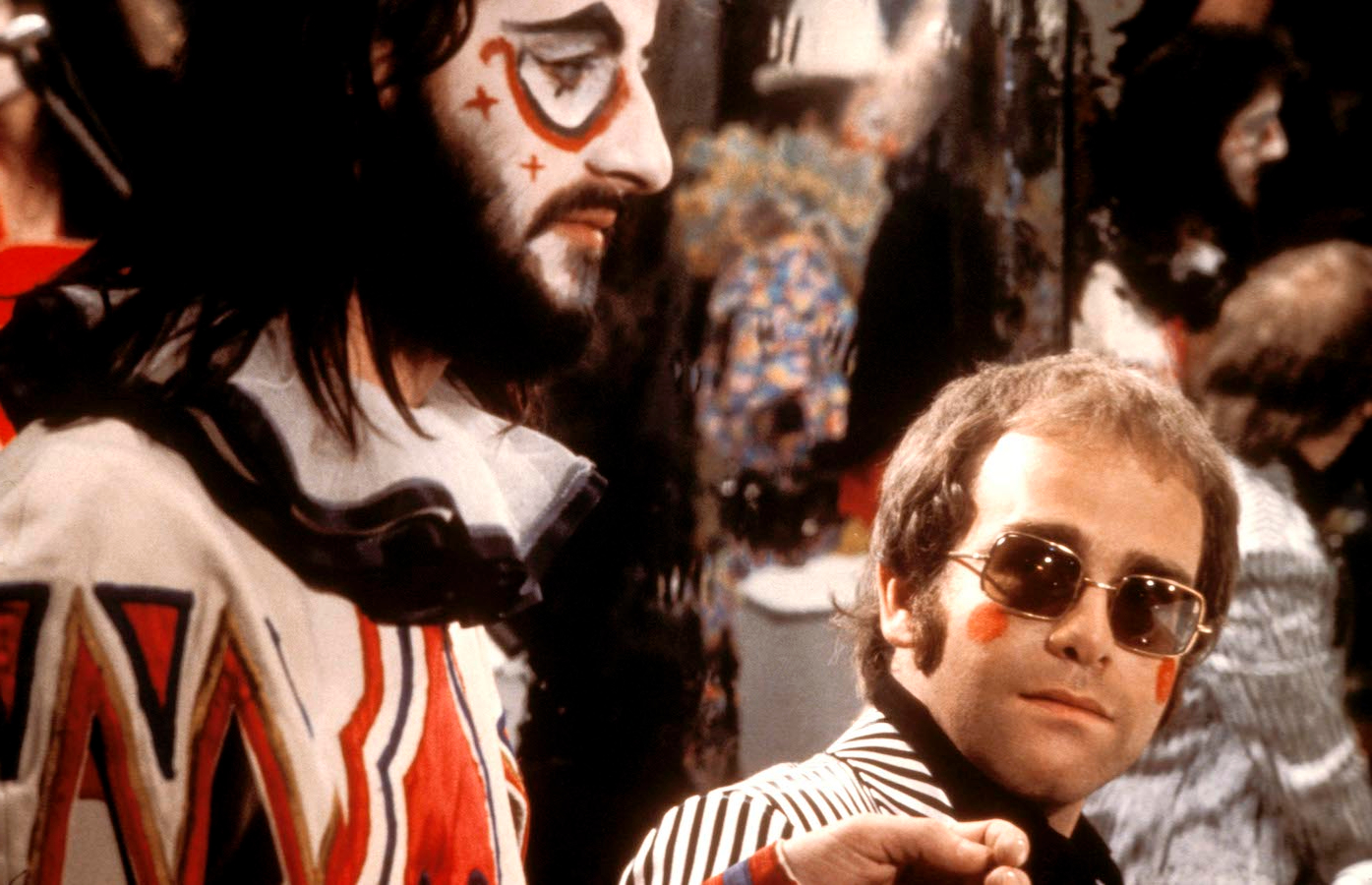 Ringo Starr directed the concert film ‘Born to Boogie’, with Marc Bolan, T Rex, Elton John and himself. They recorded a session in Ascot Sounds Studios at John Lennon’s Tittenhurst home in the UK. 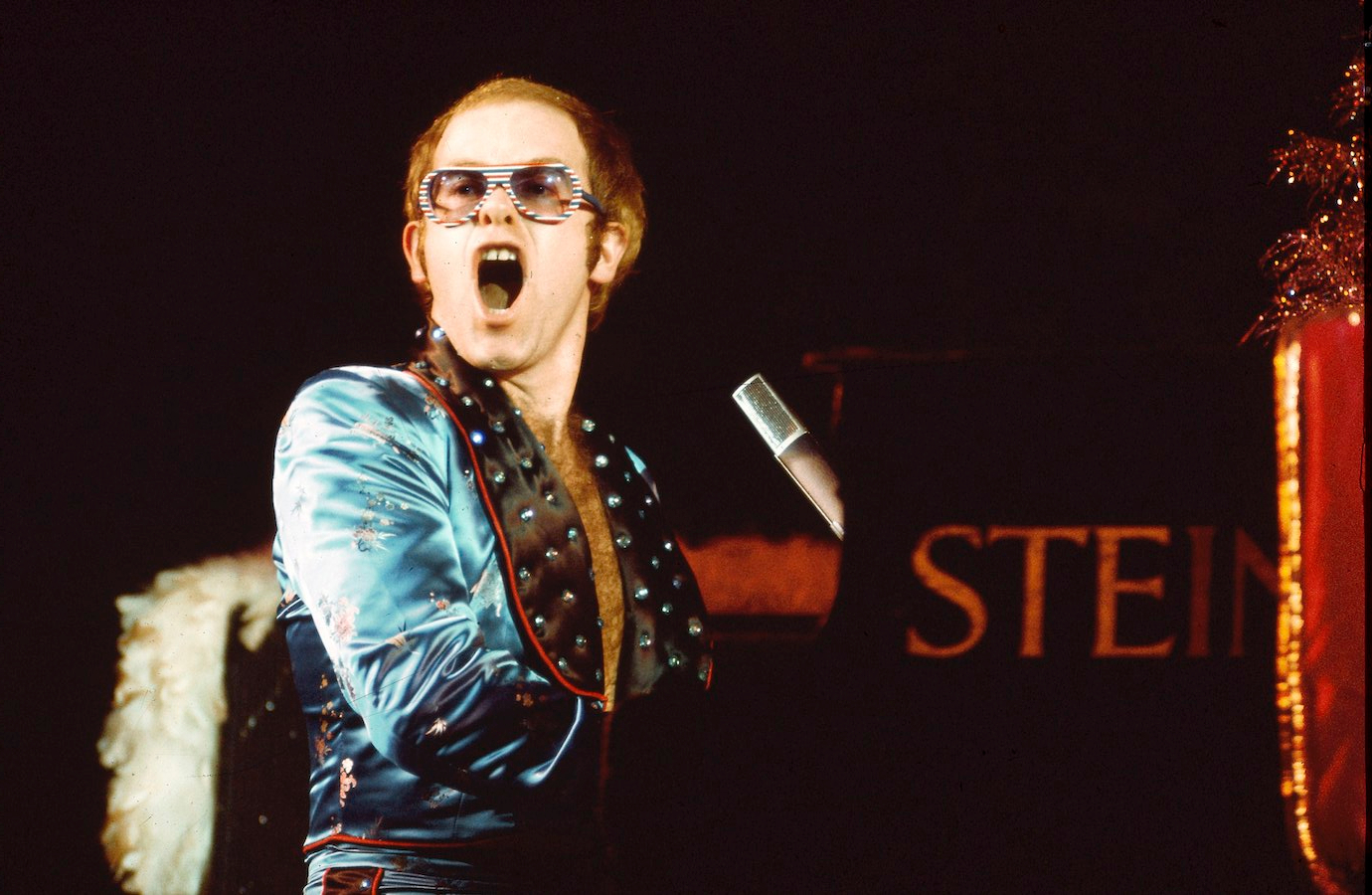 In 1973, a 23 year-old Elton released ‘Goodbye Yellow Brick Road’, marking his eighth album in under 4 years! This was a turning point for the glitter rock pop star. 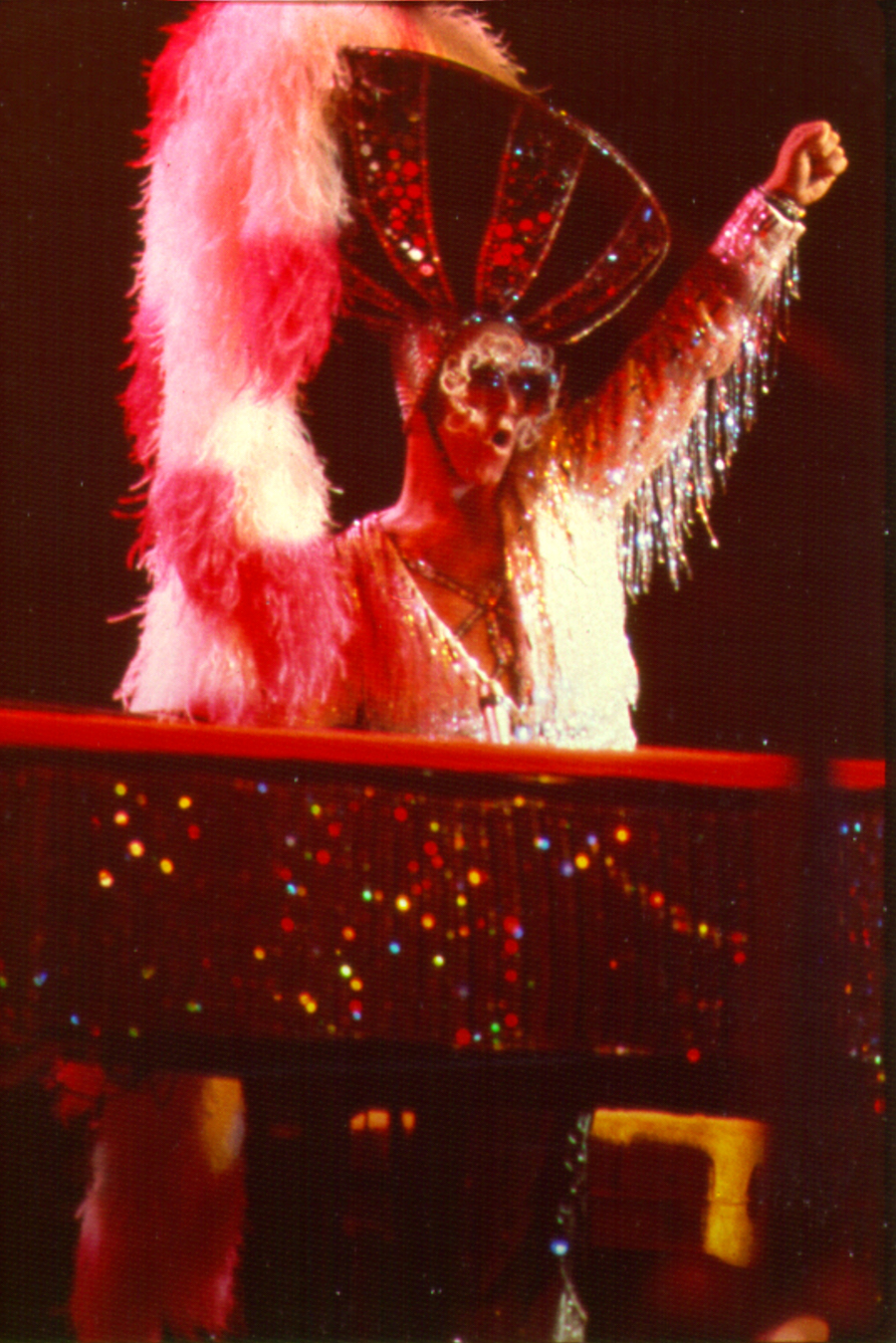 Known for his extravagant outfits, the singer performs at the piano wearing a giant fuzzy hat, circa 1974. 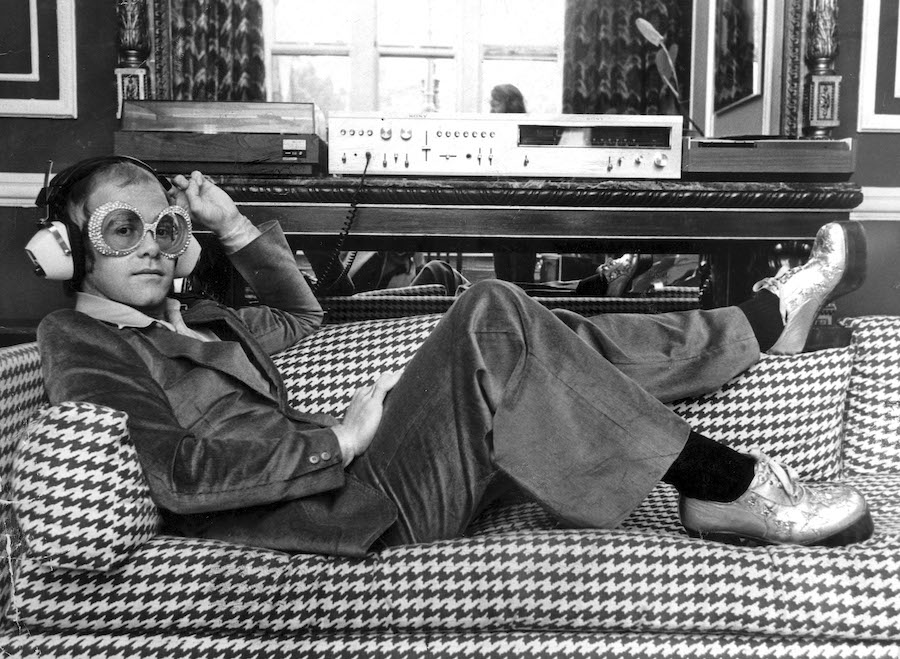 Elton knows how to rock his collection of large eyewear. No one can pull it off quite like this legend. Here he is in London listening to some music. 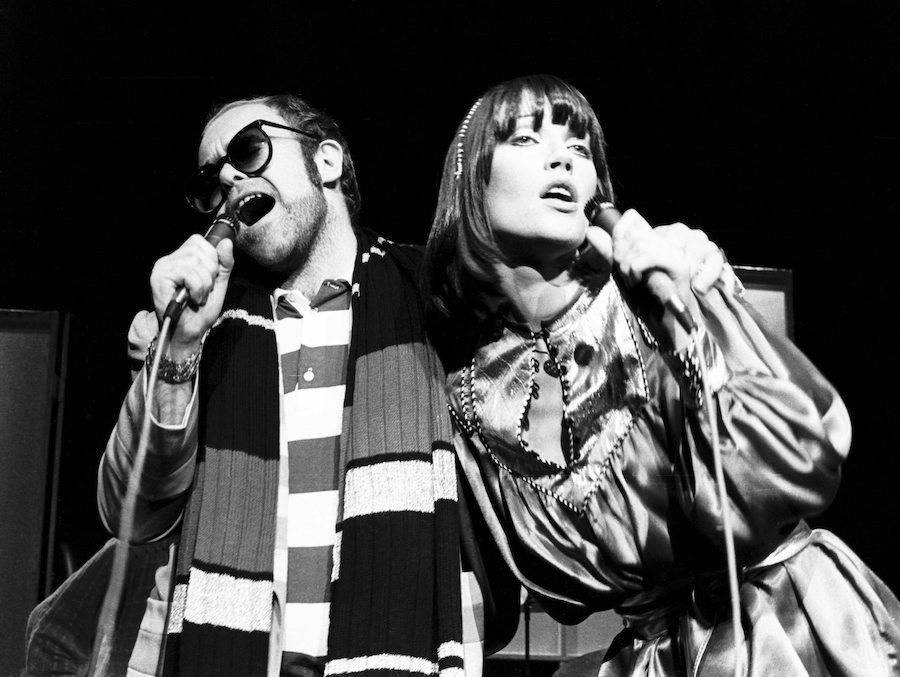 Elton joined Kiki Dee onstage for her second encore on the final night of her UK tour. He had often encouraged Kiki and later signed her to his label, Rocket. The pair had an international number one hit with ‘Don’t Go Breaking My Heart’. 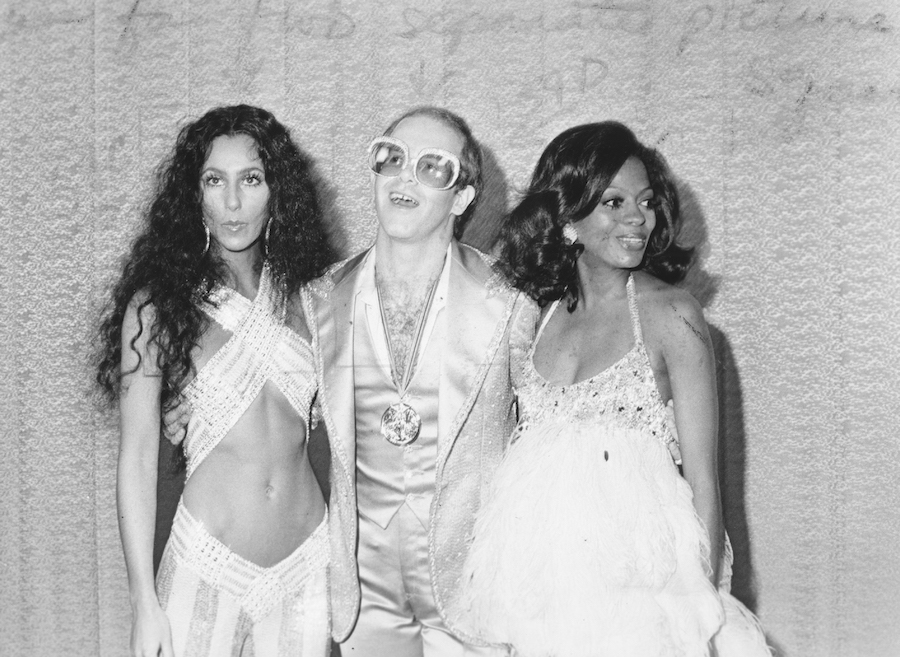 Cher, Elton John, and Diana Ross pose for a portrait backstage at the very first Rock Music Awards in 1975. The designer, Bob Mackie, has made some iconic garments for all three of these superstars. 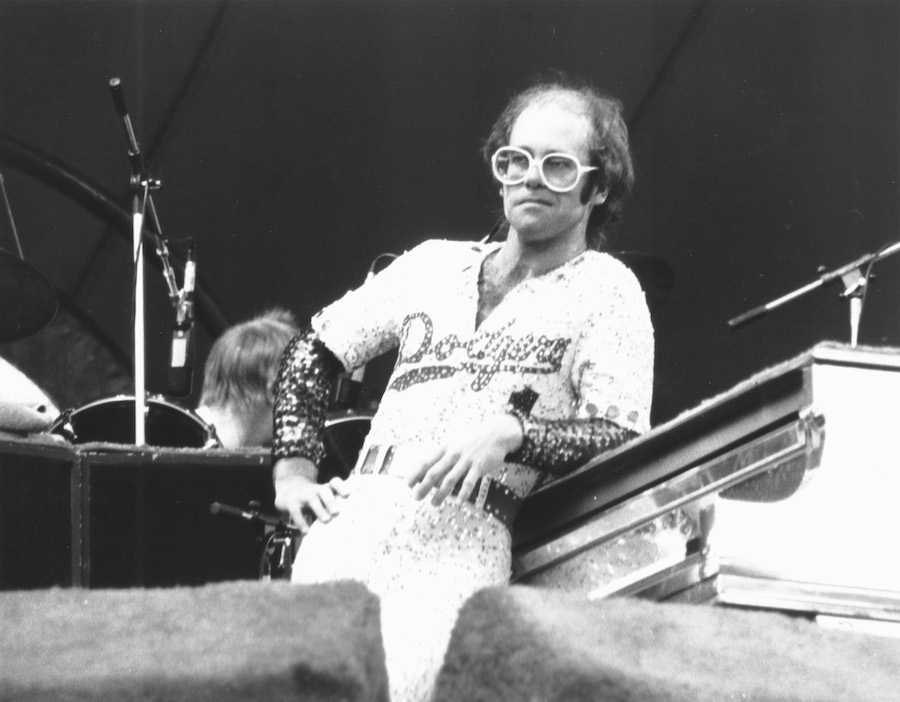 In 1975, Elton John was the first musical act to perform at the Dodger stadium since the Beatles. Over 100,000 people came to his two sold out shows to witness history being made! 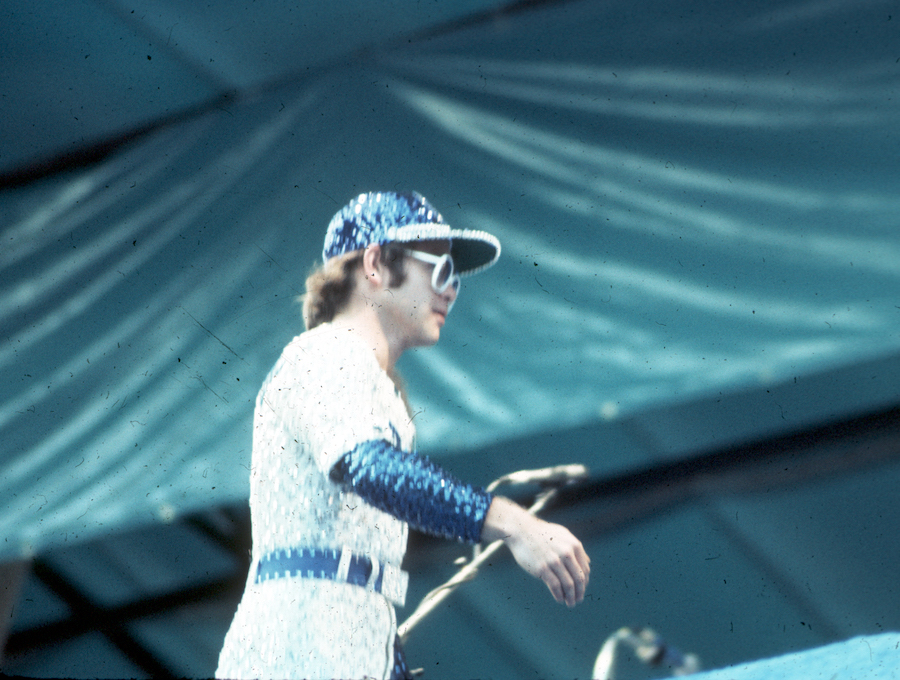 Elton’s iconic blue and white sequined Dodgers outfit was designed by the legendary Bob Mackie. It’s such a memorable look, even Harry Styles has recreated it for Halloween. 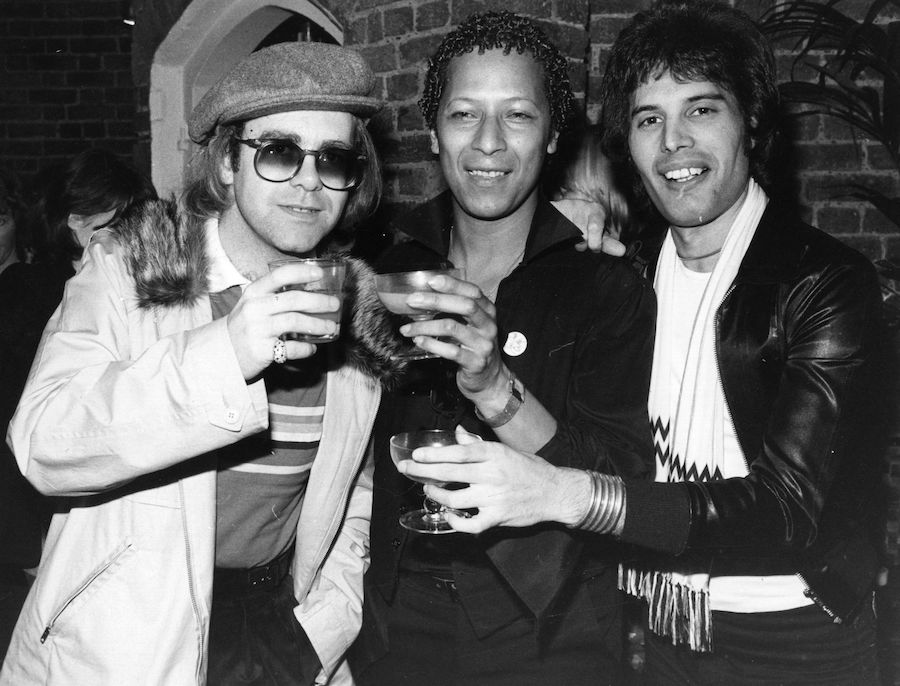 In November 1977, after this photograph of Elton John with Peter Straker and Freddie Mercury was taken, Elton announced that he would be retiring from performing. He had received backlash from admitting his bisexuality toRolling Stone. Thankfully his retirement only lasted until 1979. 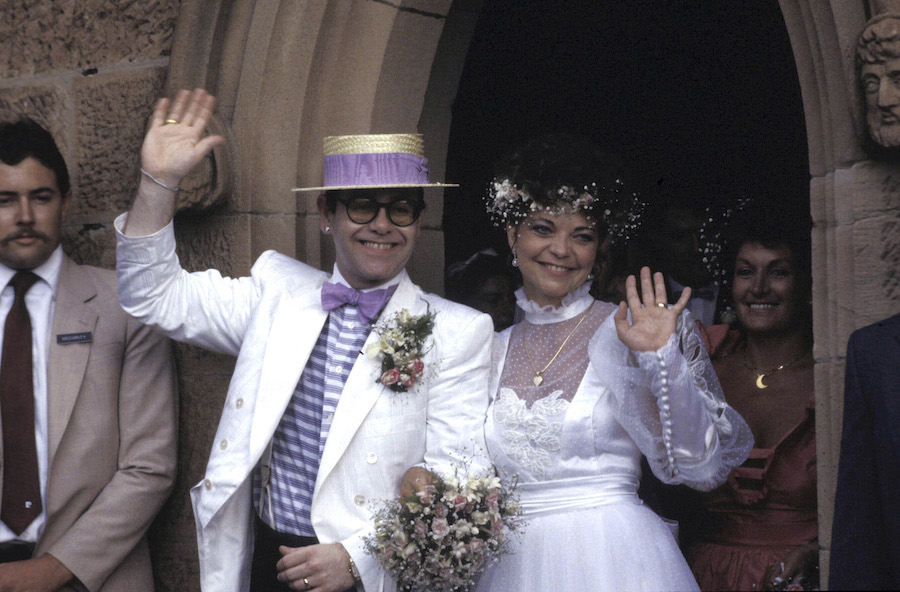 On Valentine’s day in 1984, Elton John married Renate Blauel at the St. Marks Church. It came as a shock to the public given his previous 5 year romance with his manager, John Reid, and given that he had come out as bisexual in 1976. The singer explained that he wanted to be a family man and believed falling in love with a woman would last longer than a man. Turned out, it only lasted four years until the couple divorced. 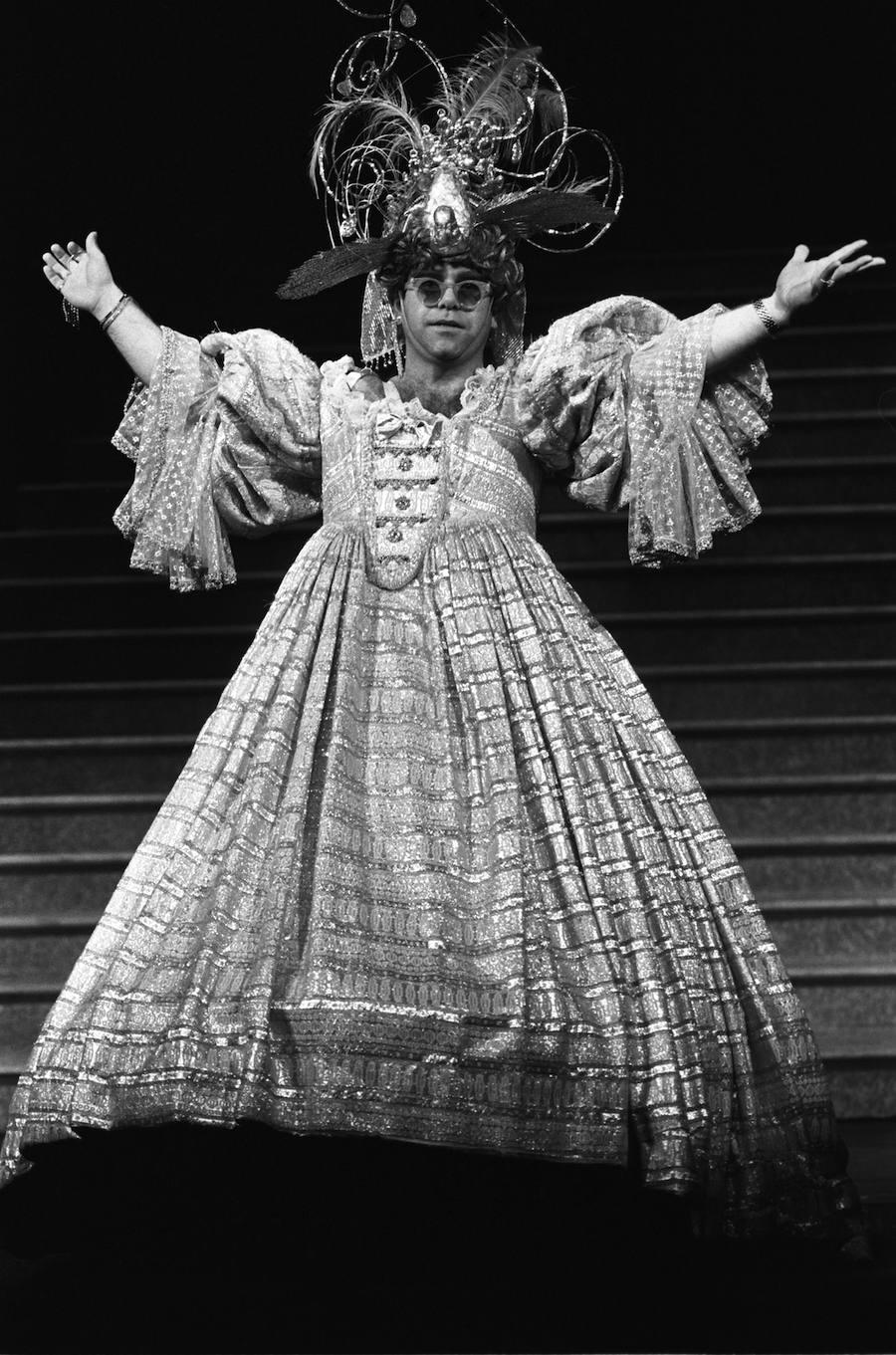 Known for his flamboyant outfits, Elton wore a dress during one of his performances in 1984. 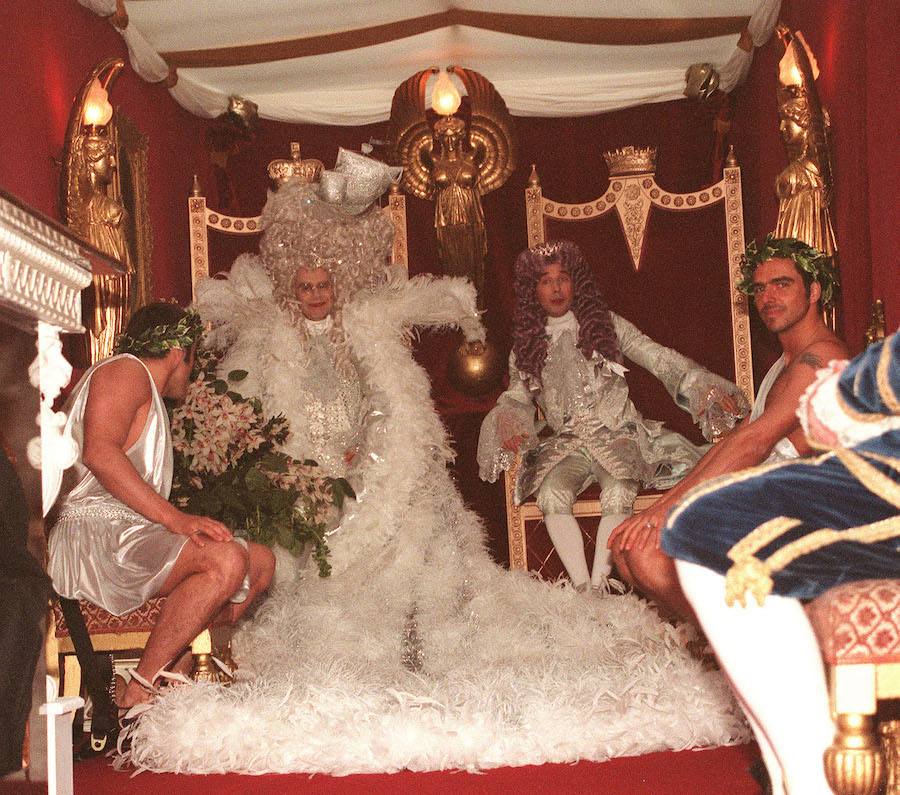 Elton John celebrated his 40th birthday in London with his boyfriend David Furnish. The guest list included others like Lionel Richie, Phil Collins, and Richard Branson. His birthday evening was topped off with fireworks. 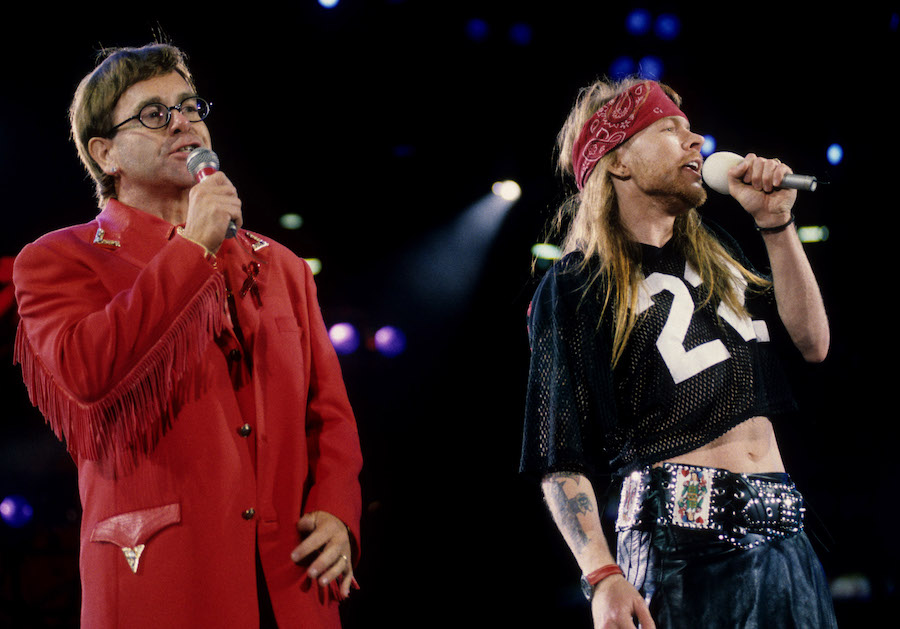 In 1992, Elton John and Axl Rose performed Bohemian Rhapsody to celebrate the life and legacy of Queen’s lead vocalist, Freddie Mercury, as well as to raise money for AIDS research and to spread awareness. The tribute concert had a live audience of 72,000 at the Wembley Stadium in London and an international audience of up to one billion tuning in on the radio and television. The profits helped launch an AIDS charity organization. 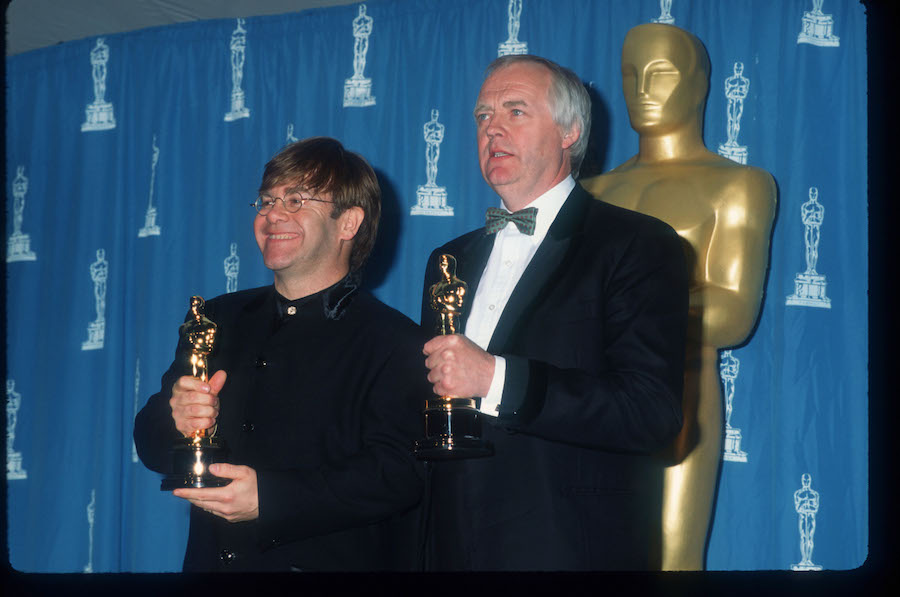 In 1995, Elton John and Tim Rice were nominated for three Oscars for their work on The Lion King. They won for ‘Can You Feel the Love Tonight’ and nominated for ‘Circle of Life’ and ‘Hakuna Matata’. He recently won his second Oscar for Best Original Song for his work on the film Rocketman. ‘(I'm Gonna) Love Me Again’ was written and composed by Elton and his longtime collaborator, Bernie Taupin. 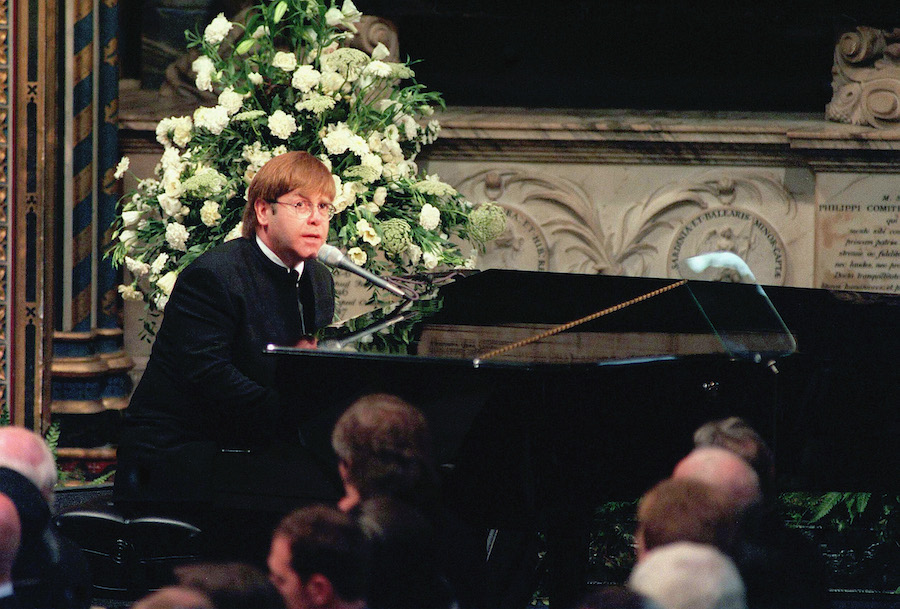 On September 6, 1997, Elton John sang ‘Candle in the Wind’ at the funeral of his close friend, Princess Diana. Elton and Bernie revised the lyrics to honor the Princess of Wales. Elton and Diana had been friends since his performance at Prince Andrew’s 21st birthday party after Diana had sent Elton a thank-you letter. 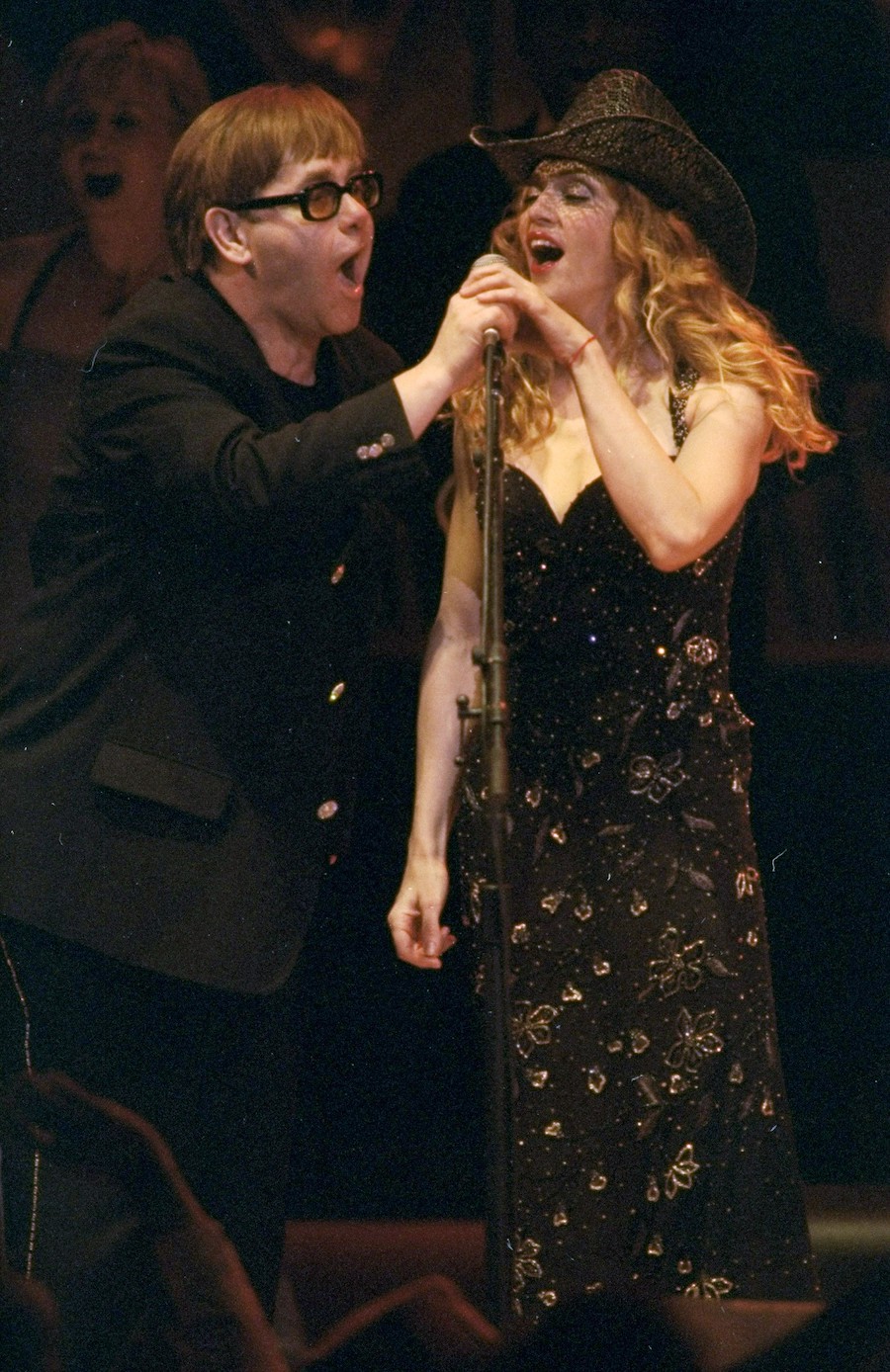 In 1998, Elton John and Madonna did a duet at the finale of the Rainforest concert at Carnegie Hall. The concert holds the world record for the largest environmental fundraising event. Elton John has performed at the fundraiser almost every year! 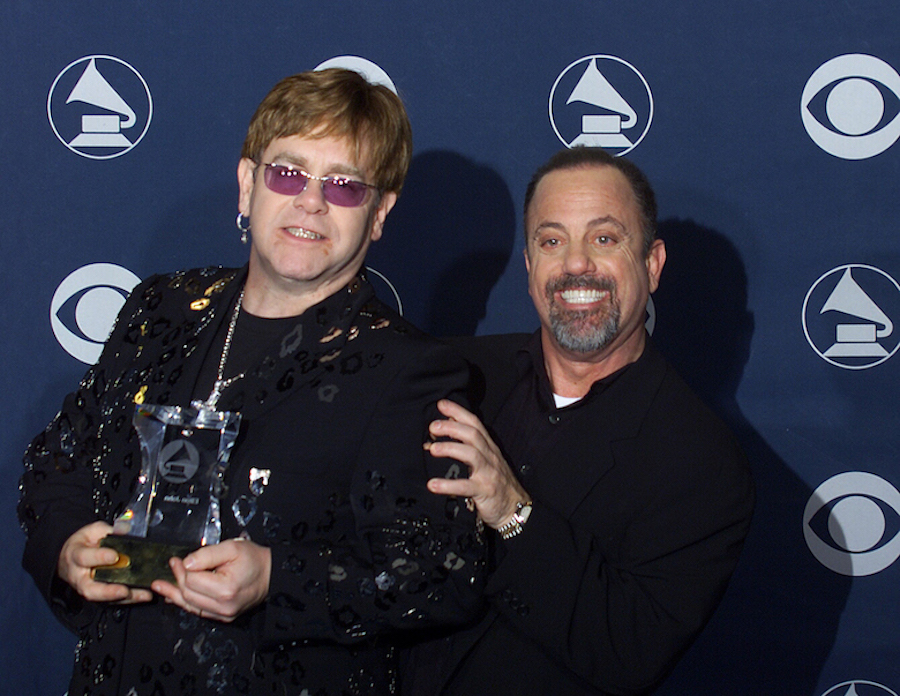 Elton John and Billy Joel pose backstage at the 42nd Annual Grammy Awards in 2000. Elton was honored as the MusiCares Person of the Year. 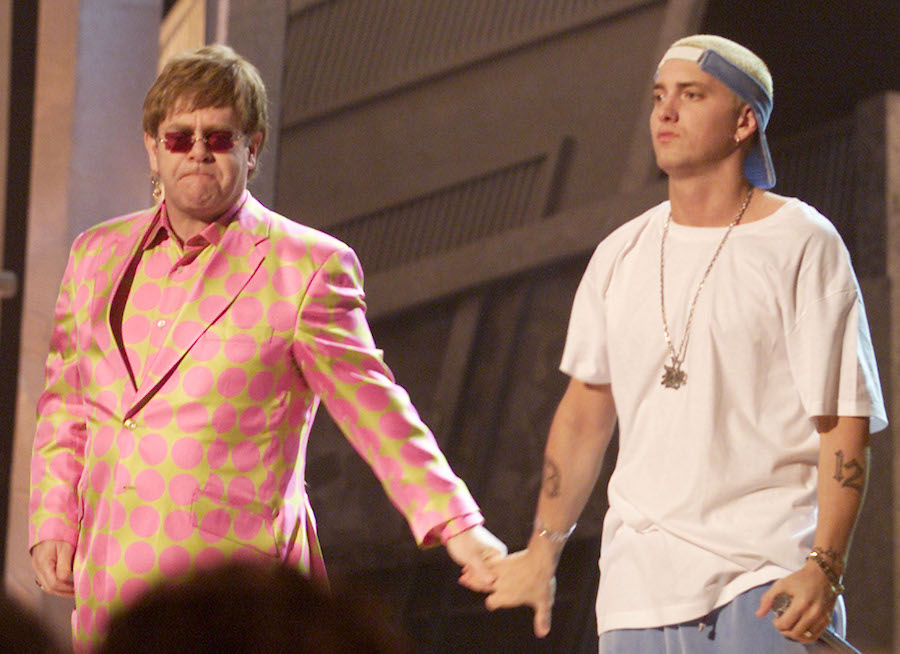 Elton John and Eminem performed “Stan” together at the 43rd Annual Grammys in 2001 after Eminem had just been criticized for his homophobic lyrics inThe Marshall Mathers LP. 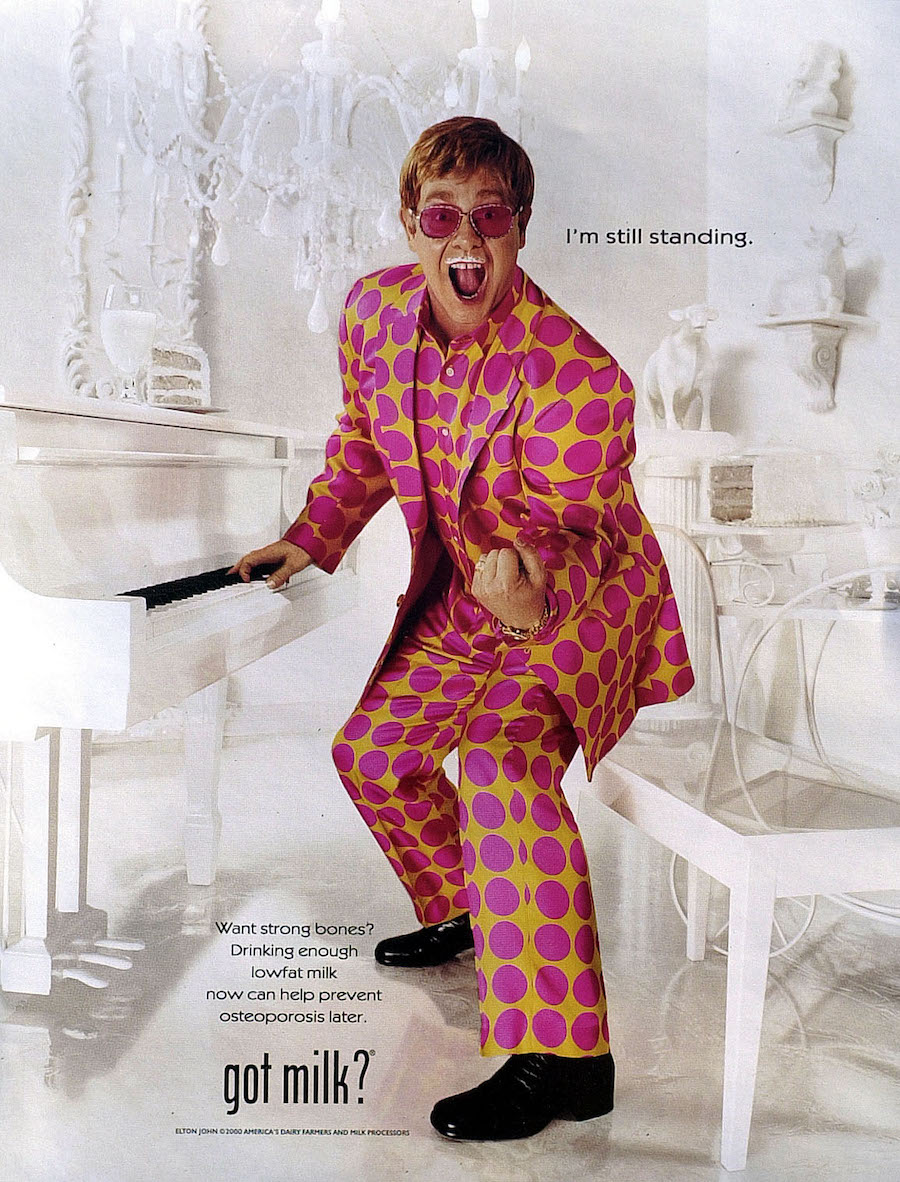 In 2001, Elton John appeared in aGot Milk ad. He wore the famous milk mustache to help promote the drinking of milk. The singer also donated his fee for the ad to the Elton John Aids Foundation. 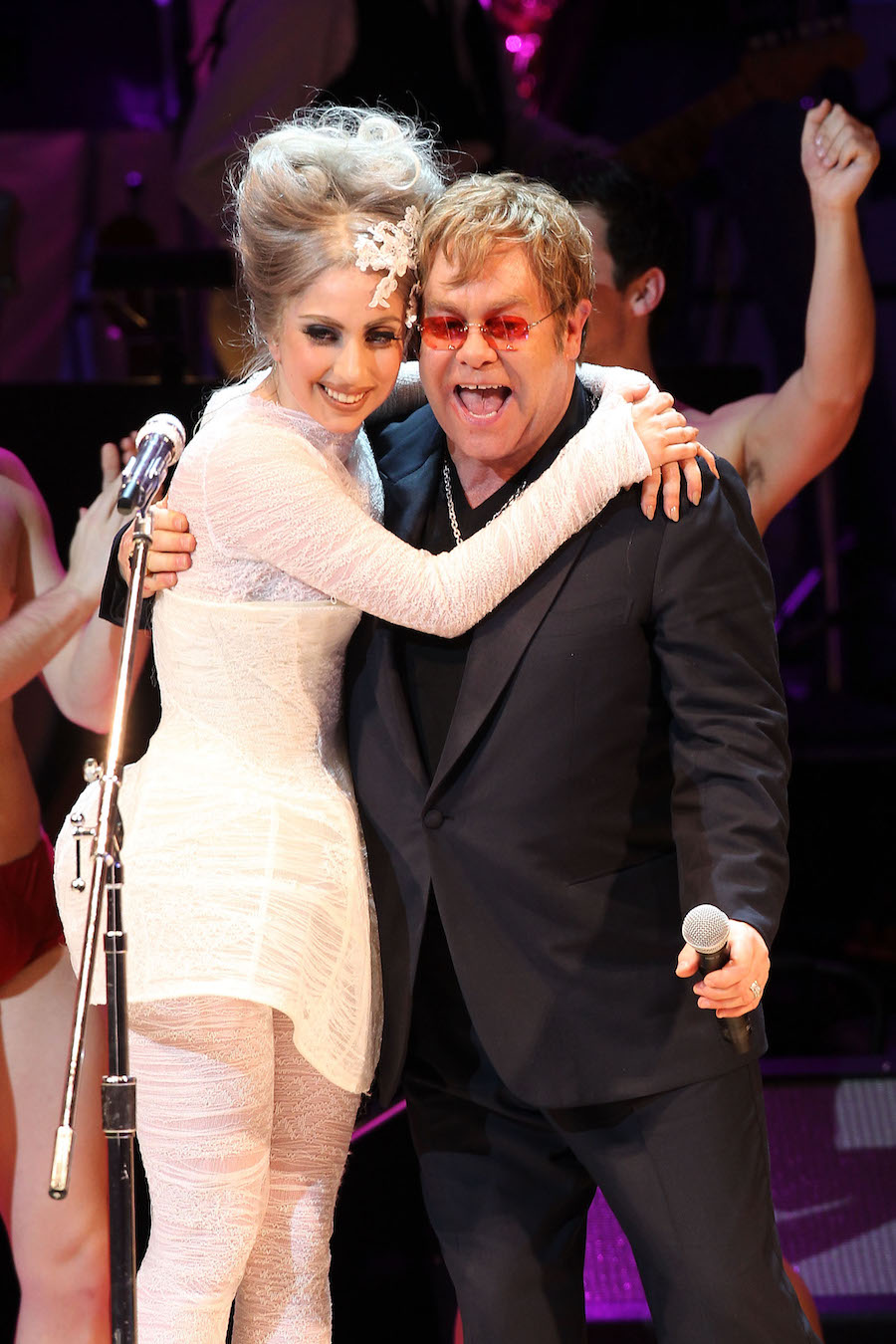 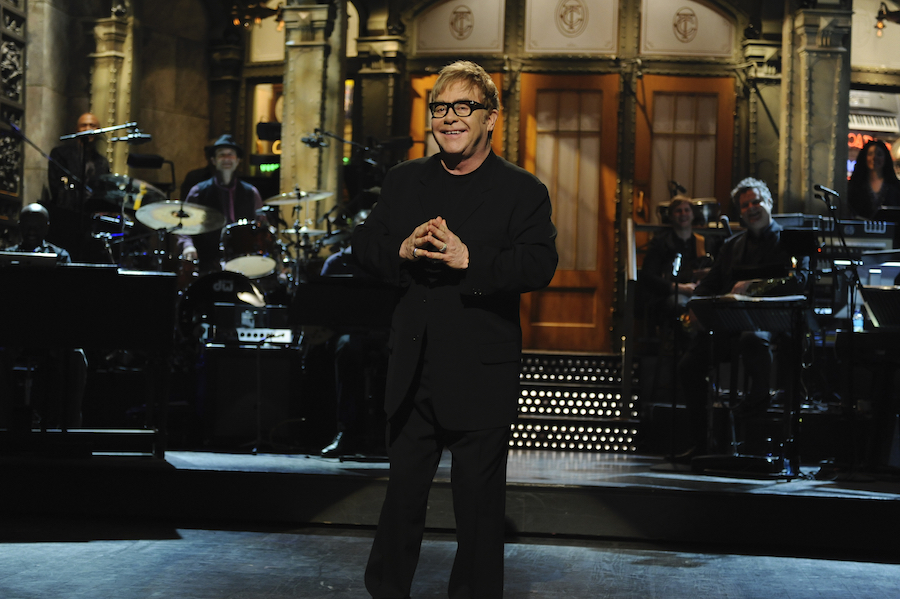 In 2011, Elton John brought his British humor on to the Saturday Night Live stage. Not only was he the host but he was also the musical guest! 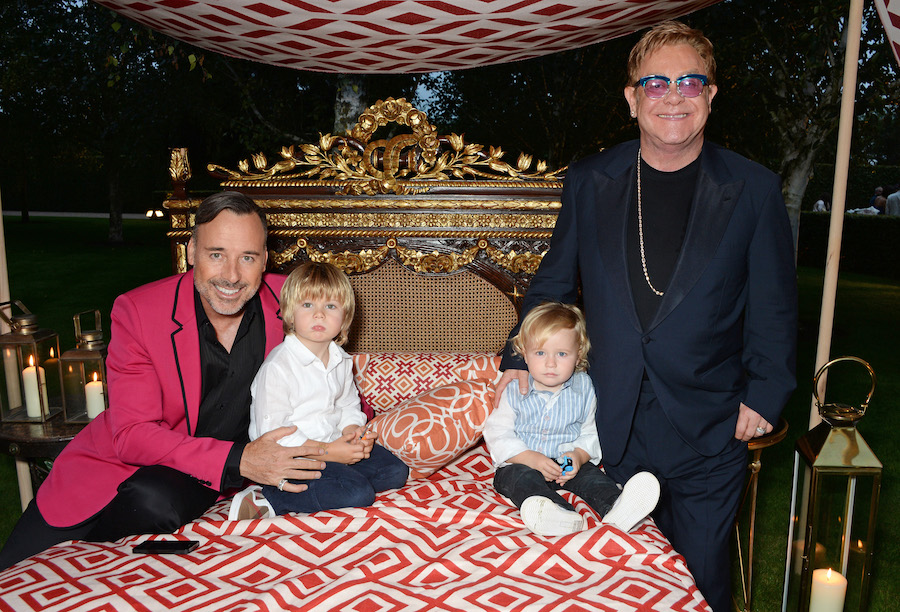 In 2014, Elton John and David Furnish hosted the Woodside End of Summer party to benefit the Elton John Aids Foundation. Here they are pictured with their two kids. 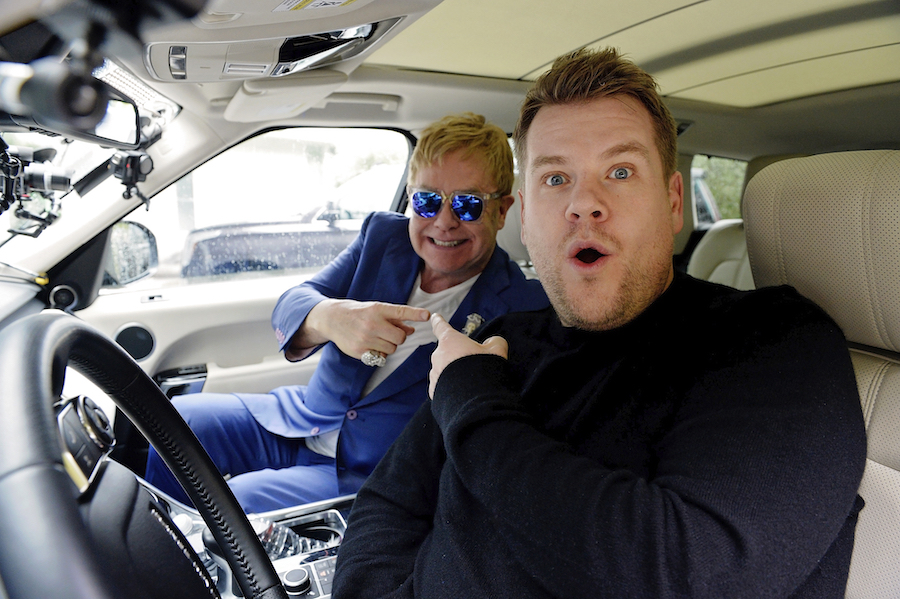 In 2016, Elton John joined James Corden for Carpool Karaoke. They jammed together to some of Elton’s hits. They even sang along to his Oscar winning ‘Circle of Life’ while Corden wore a hilarious lion’s mane and passed it off for Elton to sing in. 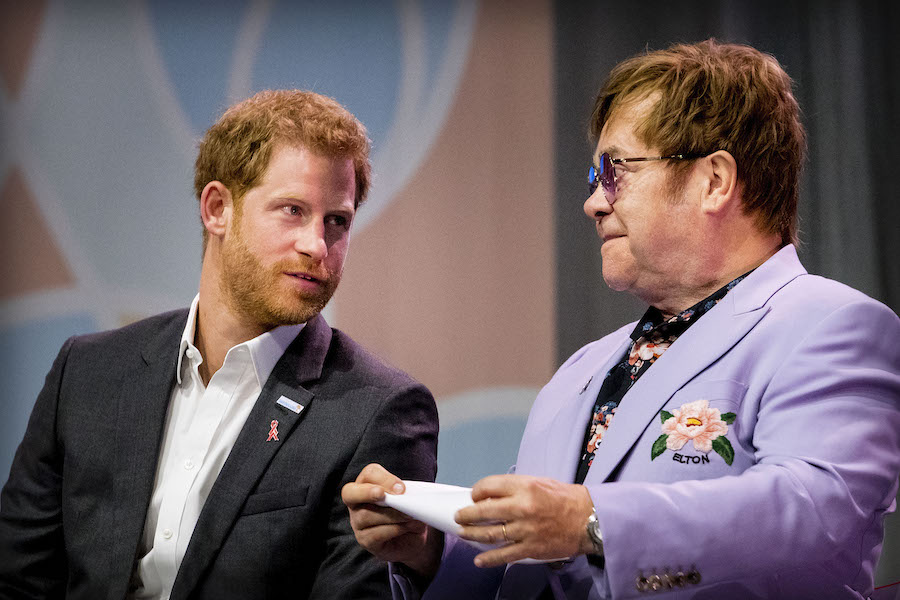 Prince Harry’s late mother and Elton John were devoted to fighting AIDS. The apple has not fallen far from the tree. In 2018, the Duke of Sussex was honored to share the stage a second time with Elton John, someone who has always put people at the center of his work. Prince Harry and Elton attended the International Aids Conference together to continue the good fight. 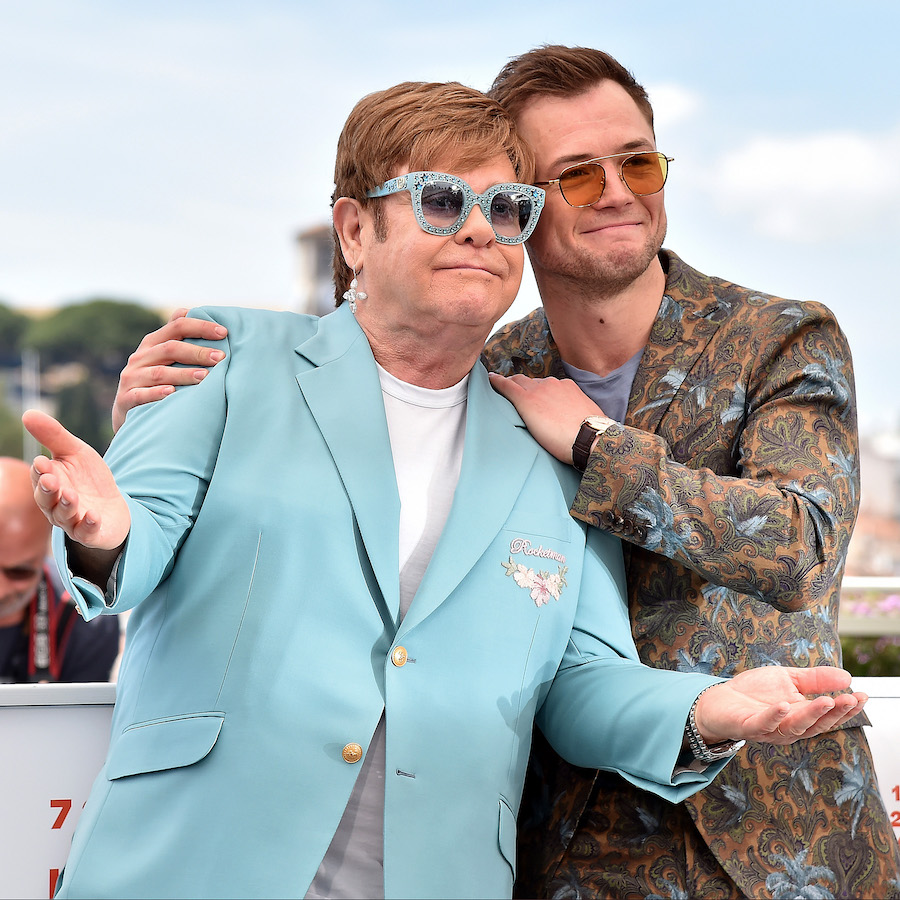 Taron Egerton played Elton John in the recent film Rocketman. Here they are at the 72nd annual Cannes Film Festival in 2019. The actor made a surprise appearance at the afterparty and performed ‘Rocketman’ alongside Elton. John and Bernie Taupin were blown away by the premiere of the film and even moved to tears. Not only did Elton win an Oscar for Best Original Song but Taron Egerton also won a Golden Globe for his performance as the legend himself.

Chat About Elton John’s Craziest Styles Through The Years