Rush Opus on How Liberals Reprogram Your Brain Proven by the Latest Proj...

TODD: From the Washington Examiner, continuing our discussion about the response to the covid, now to the media response, and you are going to hear... I just like to say, "magnum opus," because I've never had one. It's cool. "It's my Magnum opus!" Rush had magnum opi. (laughing) You're going to hear Rush at his very best, in my judgment, talking about human psychology.

We'll get to that because it is so important to take those words and compare it to what you're about to hear from the Washington Examiner. From them: "A CNN technical director to peddling fear about the coronavirus pandemic and using the daily death tracker on the screen to do so." This is the same CNN that pretended President Trump was a Russian mole, Russian "asset."

Fauci himself said -- well, it's a paraphrase -- in 2005 that hydroxychloroquine is great. It's part therapeutic and part vaccine, about hydroxychloroquine to treat upper-respiratory viruses. "'Covid? Gangbusters with ratings, right? Which is why we constantly have the death toll on the side... Let's make it higher,' CNN technical director Charlie Chester told an undercover journalist Project Veritas."

"It's fear. Fear really drives numbers... Fear is the thing that keeps you tuned in,' Chester added." This is from the same network that Project Veritas has audio where people are saying, "Yeah, yeah, yeah. We're in this to get Trump out of office." They traumatize people. I just took screenshots. I just grabbed these screenshots almost just to have of the CNN home page traumatizing people.

It's almost impossible to look at their website without trauma. Here: "Elected officials and voting rights group testify in Senate on efforts to restrict voting rights." "World records most cases ever in a single week." Yeah, the virus becomes more contagious and less deadly. "Bush describes GOP as isolationist, protectionist -- and, to a certain extent, nativist." "Waters' comments on Chauvin trial pour fuel on the fire and expose Republican hypocrisy."

You go through their website, it is, "Trauma, trauma, trauma! Be afraid, be afraid, be afraid!" Now we get to Rush. I remember hearing this when Rush spoke these words. October 22, 2019, is what this comes from. You wonder why I tell you you should subscribe to Rush 24/7? Rush was absolutely an expert on human psychology. Listen here to the Maha talk about how the left slowly reprograms people's brains to think about worst-case scenarios and death.

Project Veritasrecently exposed the fruits of their labor from 2019.

RUSH: There was a story over the weekend, some U.K. newspaper reporting on some study by some outfit that looks at the human brain. And the point of the story was that they were all amazed, all these researchers were amazed that they found somewhere in the human brain something that wipes out all thoughts of personal death.

Let me see if I can explain this to you in the profundity that it was reported. Now, I don't want to be accused of being negative here, but there is one reality that we all face. What is it? We're going to die. We don't know when and we don't know how. But we are all going to die. Now, many on the left are actually trying to counter that. You can stall it, you can delay it, you maybe can prevent it if -- and then do these crazy, wacko things. 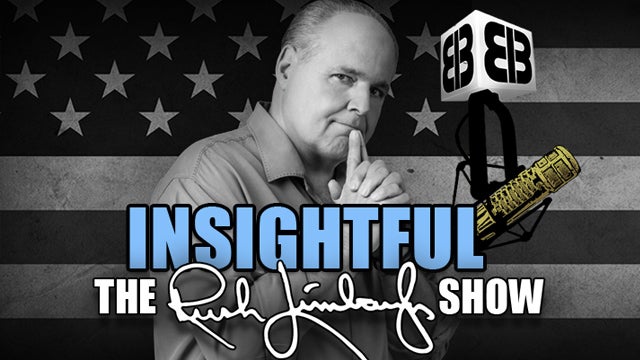 But this story pointed out that the human brain is a marvel of brilliance in itself because while we all know we're gonna die, we think it's not gonna happen to us for most of our lives. It's something that happens to other people. But it's not gonna happen to us. And, you know, if it weren't that way, we would all be quivering masses of jelly from the moment we are old enough to realize we're gonna die.

They went on to say that the brain, the average human brain performs in a way that all living people think death is something that happens to other people. Now, this is not to say that people were stupid or that we're robots. It's actually much more, I think, poignant and brilliant than that. It's a reality we can't deny. We all know it, but what if that's all we thought about all the time?

Well, my point in bringing this up is the left has found a way to turn that off in people! The left has actually succeeded in forcing a bunch of young people to think constantly about the fact they're gonna die! We're seeing the impact. We're seeing what happens when a human brain gets reprogrammed with the idea that death is imminent every day. What does it do to people? It turns 'em into immediate victims. It turns them into big-time supporters of gigantic, Big Government looking for ways to save us, stop climate change, stop this, stop that, we're gonna die.

It's classic, I think. It was an eye-opening thing for me when I came across this story. The left has found a way to counteract the normal function of the human brain, which is to wipe all thoughts of personal death. And they have found a way to overwrite that in such a way that their adherents think of nothing but their own death and who's going to be responsible for it.

And this is what the left is doing. The left is convincing more and more young people that they're dead. They're dead. Unless, unless we get rid of fossil fuels, unless we find a way to colonize Mars. I think the left is expanding the number of cases of teenage and young adult depression and other psychological diseases by finding ways of overcoming the natural protective mechanism in the brain that makes most people not confront the fact they're gonna die day in and day out. It's something that happens to other people, a shame when, oh, isn't that so bad, go to funerals, do everything about it.

It's another one of these things, by the way, that makes me believe in God. I don't want to get too deep here, but it's another one of those things that -- and there are countless little things like this that add to my instinctive belief in God. Some days this stuff amuses me, folks, and then other days when I take it too seriously, it really infuriates me when I stop to think how literally damaging and poisonous to everybody the left is as they stop at nothing to spread their sick political ideology throughout the known worlds of humanity.

TODD: You see the comparison directly to what CNN is doing to traumatize people about the covid flu, now the need to lock down because of the weather. And this morning I saw the saddest thing that should speak to do. A person very evidently homeless coming out from the literal railroad track area -- very dirty, very in need of food. I wish I'd stopped. I didn't, quote, "have time," in need of food and shelter but with a filthy woke mask around his face. This is the left, folks -- and that was Rush Limbaugh.

Chat About Rush Opus on How Liberals Reprogram Your Brain Proven by the Latest Proj...