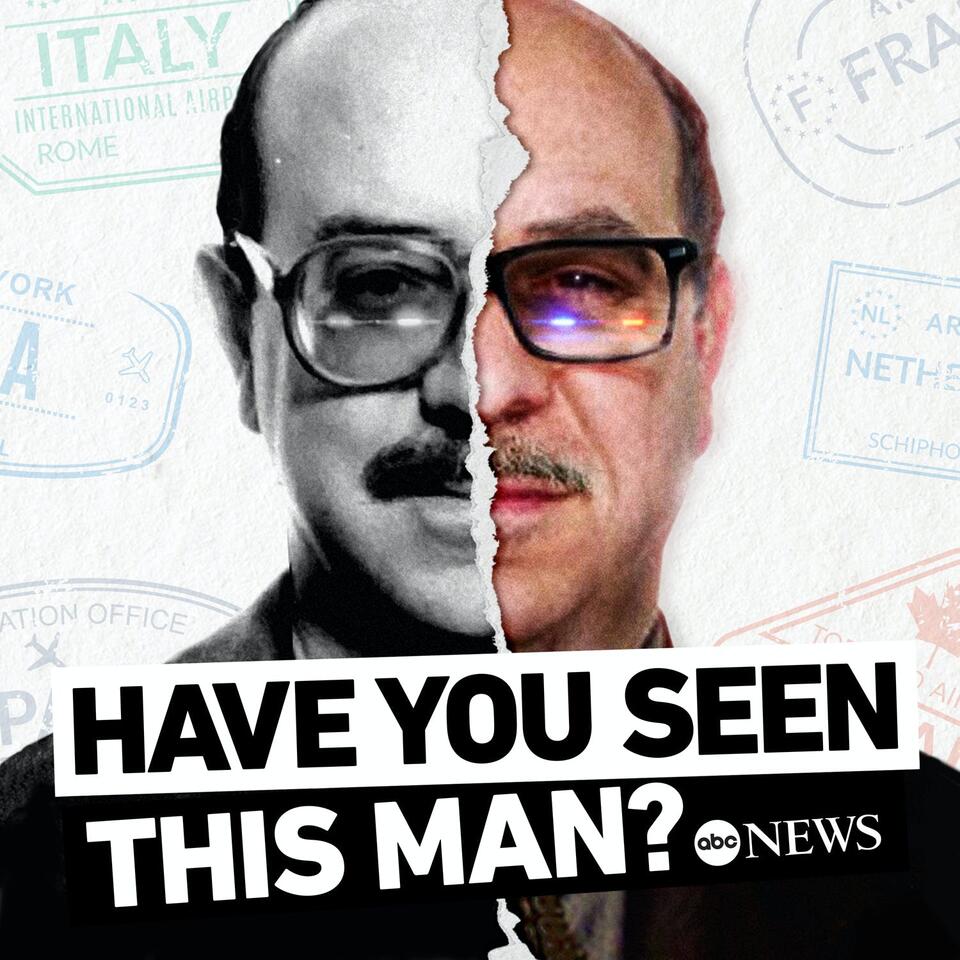 Have You Seen This Man?

John Ruffo engineered one of the most outlandish frauds in American history -- a $350 million swindle. But even after his arrest, no one really knew Ruffo. When the unassuming Brooklyn computer salesman pleaded guilty in 1998 and received a 17-year prison sentence, his story was just beginning. He turned in his ankle monitor, made a final stop at an ATM, drove to JFK Airport and vanished. In Season 2, the ABC News investigative unit joins the U.S. Marshals cold-case fugitive manhunt for Ruffo as they span the globe and uncover surprising details about his cloak-and-dagger past. The final clue may come from listeners who will once again be asked, Have You Seen This Man?

October 15, 2019 • 2 min
The U.S. Marshals recently added notorious murderer Lester Eubanks, who's been on the run for over 45 years, to their 15 Most Wanted list. While on bail awaiting trial for sexual assault in 1965, Eubanks shot and bludgeoned 14-year-old Mary Ellen Deener to death in Mansfield, Ohio. After his apprehension, Eubanks confessed to the crime, was convicted and received the death sentence. While confined in the Ohio state prison syste...
Mark as Played

S1 | Ep. 1: Outside the Half-Hour Laundromat

October 23, 2019 • 30 min
The murder of an Ohio middle school student in 1965 shocks a hard-working community. And the arrest of a 22-year-old military man with a checkered record appears to be the end of a painful chapter for her family. But when Lester Eubanks heads off to prison, it is just the beginning of the story. Tell us what you think about this series with a rating and review: http://bit.ly/2O38DdC "Have You Seen This Man?" is produced by ...
Mark as Played

October 23, 2019 • 32 min
For years, Ohio's prisons operated as menacing dungeons, with inmates facing unchecked violence of the sort depicted in Hollywood movies. But Lester Eubanks arrives at the Ohio State Penitentiary in the midst of a prison reform movement. And he capitalizes on a brief window of opportunity. Tell us what you think about this series with a rating and review: http://bit.ly/2O38DdC "Have You Seen This Man?" is produced by th...
Mark as Played

October 30, 2019 • 32 min
Lester Eubanks finds himself outside the prison walls. As he sets out to start his life on the run, he turns to a relative for shelter and support. And some people begin erecting barriers to avoid questions about Lester's disappearance -- an effort that persists to this day. Tell us what you think about this series with a rating and review: http://bit.ly/2O38DdC "Have You Seen This Man?" is produced by the award-winning...
Mark as Played

November 6, 2019 • 42 min
With a fishing license for identification and a ten-speed bike to get around, Lester Eubanks starts a new life with a new identity. And he becomes the mentor to a young teenager, who speaks publicly about that period for the very first time. Tell us what you think about this series with a rating and review: http://bit.ly/2O38DdC "Have You Seen This Man?" is produced by the award-winning ABC News Investigative Unit and ABC A...
Mark as Played

November 13, 2019 • 33 min
Mary Ellen's family makes a public plea for help. The US Marshals meet a relative of Lester Eubanks' who appears ready to help. And we make an unexpected discovery. Could an oil painting hold important clues to Lester's whereabouts? Tell us what you think about this series with a rating and review: http://bit.ly/2O38DdC "Have You Seen This Man?" is produced by the award-winning ABC News Investigative Unit and AB...
Mark as Played

November 20, 2019 • 44 min
The U.S. Marshals explore the potential for genetics to lead them to Lester Eubanks as the manhunt continues to heat up. And the community of Mansfield rallies behind the surviving relatives of Mary Ellen Deener. Tell us what you think about this series with a rating and review: http://bit.ly/2O38DdC "Have You Seen This Man?" is produced by the award-winning ABC News Investigative Unit and ABC Audio, the makers of the #1-ra...
Mark as Played

November 19, 2020 • 38 min
The search for convicted killer Lester Eubanks winds into the thick woods of Warrior, Alabama, as this podcast and enhanced media attention delivers a steady flow of fresh tips to the U.S. Marshals. The deputy leading the search contracts coronavirus, but not before finding a tiny crack in the wall of silence around the longtime fugitive. Tell us what you think about this series with a rating and review: http://bit.ly/2O38DdC "...
Mark as Played

July 29, 2021 • 2 min
John Ruffo was an unassuming computer salesman from Brooklyn who engineered one of the most outlandish frauds in American history. He received a 17-year sentence for his $350 million swindle -- but his story didn’t end there. After he turned in his ankle monitor, Ruffo made a final stop at an ATM, drove to JFK Airport and vanished. The ABC News investigative unit now joins the U.S. Marshals as they span the globe and uncover surpri...
Mark as Played

August 11, 2021 • 41 min
John Ruffo, a small-time computer salesman from New York City with a surprising gift for deception, committed a staggering $353 million bank fraud. After Ruffo was handed a 17-year sentence, the U.S. Marshals had him in handcuffs, ready to haul him off to prison. What happened next would leave a trail of shattered lives and spark one of the longest, most intensive manhunts in U.S. history.  To see photos of John Ruffo, including a...
Mark as Played

August 18, 2021 • 43 min
The crime was audacious –- the biggest swindle of its time –- falsely trading on the name and clout of American’s tobacco giant, Phillip Morris. Getting access to millions, John Ruffo transformed himself into a Wall Street high roller. He spun fantastical tales of secret government missions. And when it all started to unravel, he ripped a page from a John Grisham thriller, leaving U.S. Marshal criminal profilers to make sense of a ...
Mark as Played

August 25, 2021 • 47 min
Linda Lausten spent 19 years married to a man she never really knew. His escape sent her reeling -- as if widowed by a husband who wasn’t dead. She starts to uncover clues about who John Ruffo really was. As the U.S. Marshals continue their search, go along as a tantalizing lead takes them inside Dodger Stadium.  To see photos of John Ruffo, including an age progression image provided by the U.S. Marshals, visit https://abcn.ws/37t...
Mark as Played

September 1, 2021 • 51 min
Investigators thought they knew John Ruffo when they exposed his crime. But in tape-recorded prison calls, Ruffo’s accomplice tells the FBI they don't know the half of it. One of Ruffo’s lawyers reveals the reason he needed a top secret clearance to mount Ruffo’s defense. And as Ruffo’s past takes shape, U.S. Marshals enter a maze of fake identities and front companies, trying to follow the money.  To see photos of John Ruffo, ...
Mark as Played

September 8, 2021 • 48 min
In secret diaries he left behind, John Ruffo spins an exotic Cold War tale. But is it all part of another Ruffo con? Did one FBI veteran carry crucial information to the grave? We go in search of retired agents and an infamous convicted FBI turncoat to see if any of them hold answers to the mystery of Ruffo’s escape. To see photos of John Ruffo, including an age progression image provided by the U.S. Marshals, visit https://abcn.ws...
Mark as Played

September 15, 2021 • 58 min
A scrap of paper that Linda found in Ruffo’s coat pocket reveals an early clue pointing investigators to Italy. Does Ruffo’s Italian barber know more? U.S. Marshals head to Rome for answers in the midst of a global pandemic. They try and rekindle the search for the fugitive on the Adriatic coast. Back home, Ruffo's former wife contemplates a reunion she both dreads and desperately wants. To see photos of John Ruffo, including a...
Mark as Played

An Update from 'Have You Seen This Man?'

March 24, 2022 • 2 min
Following the second season success of ABC Audio’s podcast “Have You Seen This Man?,” ABC News Studios brings the international search of fraudster John Ruffo to streaming with a new Hulu Original. Emmy® Award-winning co-host of “The View” Sunny Hostin hosts the three-part limited series featuring one of the longest, most intense hunts in U.S. history. All three episodes of “Have You Seen This Man?” premiere on Thursday, March 24, ...
Mark as Played

January 26, 2023 • 2 min
Check out "Truth and Lies: The Informant" from our colleagues at ABC Audio, a remarkable story of an ordinary man who risked his life as an FBI informant to stop what would've been one of the worst terrorist attacks in U.S. history. A new five-part series, available on Apple Podcasts (https://apple.co/3wgRdzb), Spotify (https://spoti.fi/3XFQm6X), Amazon Music (https://amzn.to/3ksWvFj), or wherever you're listening n...
Mark as Played