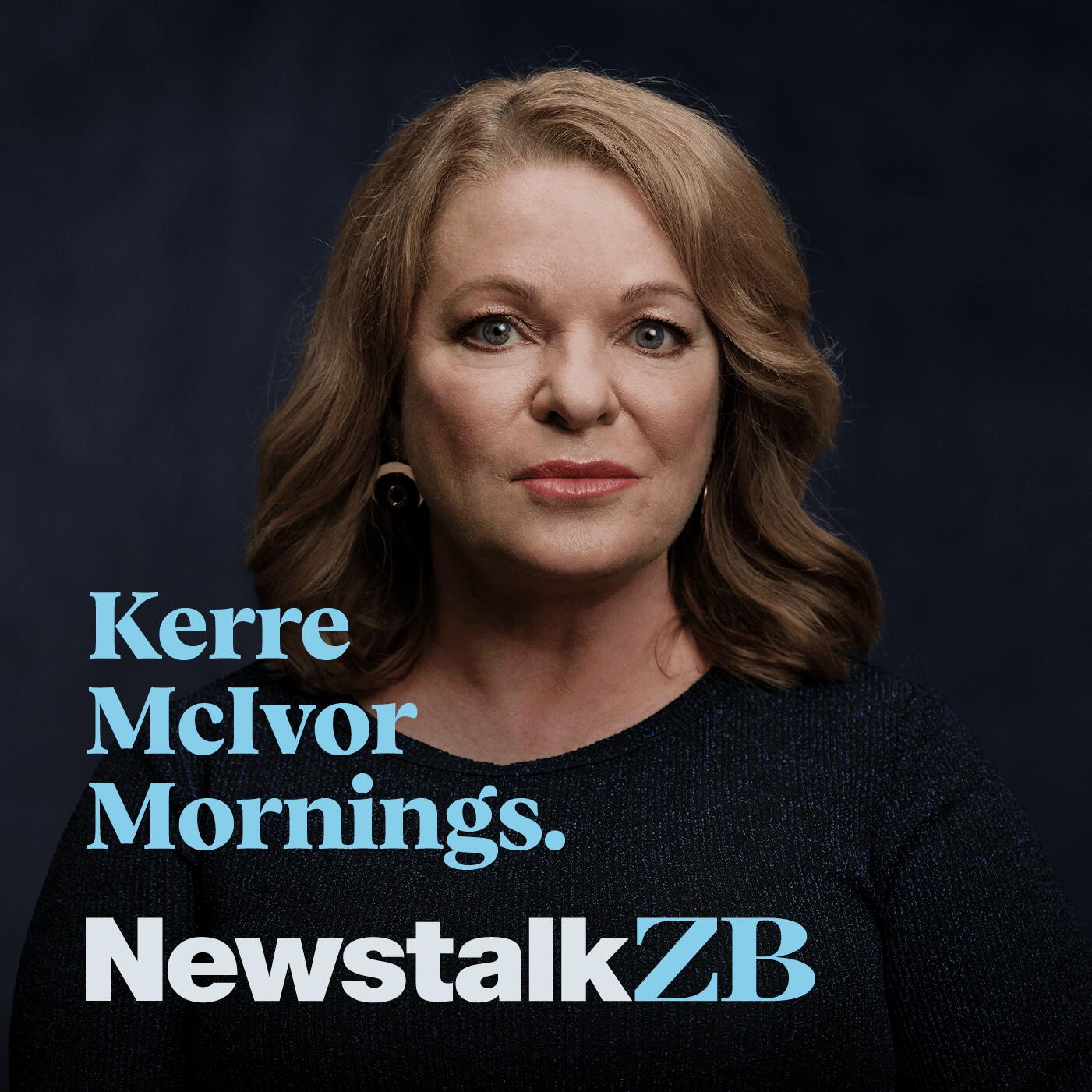 Join Kerre McIvor one of New Zealand’s best loved personalities as she dishes up a bold, sharp and energetic show Monday to Friday 9am-12md on Newstalk ZB. News, opinion, analysis, lifestyle and entertainment – we’ve got your morning listening covered.

Kerre McIvor: Are there still Good Samaritans amongst us?

May 12, 2021 • 4 min
You'd like to think you'd be the first to rush in if someone was being threatened, but there is a very real risk in these mad and crazy times that you could literally be putting your life on the line to help.
In the wake of the Dunedin Countdown stabbings, there are stories of tremendous courage on the part of the store manager and bystanders who are now in hospital recovering from their injuries.
Others said they just froz...
Share
Mark as Played

Chris Lewis and Sid and Chand Sahrawat: Farmers and hospitality disappointed to not be allocated MIQ spaces

May 12, 2021 • 19 min
The government's making space in managed isolation to get skilled and critical workers into the country.
Over the next 10 months, 500 spaces per fortnight will be allocated to support New Zealand's economic recovery.
Three hundred seasonal workers will be able to arrive each month from June, 2400 in total by next March.
There's also an allocation for construction workers, international students and refugees.COVID-19 Respon...
Share
Mark as Played

Kerre McIvor: Where will these new refugees end up?

May 11, 2021 • 4 min
Break out the bubbly.
Well, the bubbly we would have had if our winegrowers had been able to harvest their grapes.
From next month around 300 of the country's 6200 MIQ rooms will be allocated to RSE workers every month, meaning 2400 RSE workers are estimated to arrive by March next year.
There will also be 400 international students allowed in June for the start of semester two, 240 specialised construction workers will arrive be...
Share
Mark as Played

May 11, 2021 • 8 min
The Government is hitting gangs where it hurts their pockets.
It's amending the Criminal Proceeds Act to allow seizure of assets of people associated with organised crime – for items they couldn't afford with their legal income.
Police Association President Chris Cahill told Kerre McIvor this is a positive move for Police - and they could do it with more of their possessions.
"If you can take those bikes and say 'you ...
Share
Mark as Played

Kerre McIvor: All parties should be involved in large scale DoC changes

May 10, 2021 • 5 min
Well there's a funny old thing.
Last week, I received a text from someone saying that we needed to be aware that Māori were being appointed to conservation councils replacing elected councillors and that this was being done without any consultation.
I'm pretty sure I read it out - it was a big week and maybe I thought I just did - but we did pass it on to our news room.
And then what do you know, on Sunday the National Part...
Share
Mark as Played

May 9, 2021 • 3 min
A concerned father has spoken out after his 8 -year-old daughter was confronted by the sight of a naked man sunbathing while she was collecting rubbish on Pāpāmoa Beach.
Dave Laidlaw, 41, was walking along the beach towards the Mount from Pacific View Rd with his two young daughters and was shocked when they saw the naked man because there were no signs indicating it was a nudist area, the Bay of Plenty Times wrote.
"[She] spotte...
Share
Mark as Played

May 6, 2021 • 6 min
The Police Association have slammed the government's public sector pay freeze as an unacceptable bombshell, and I couldn't have put it better myself.
Bombshell is right.
Had we been warned that New Zealand was facing a period of belt tightening in the wake of Covid, had we been advised that we must all be prepared for a time of austerity as we pay back the awful cost of lockdowns, had the government not been handing out mon...
Share
Mark as Played

Lockwood Smith: Former Speaker on the testy exchange between Trevor Mallard and National

May 5, 2021 • 5 min
Trevor Mallard is again facing pressure to stand down.
The Speaker sparked a testy debate with National MPs last night after he said under Parliamentary Privilege a worker had committed sexual assault.
Mallard has previously apologised to the worker for wrongly accusing him of rape.
Leader of the House Chris Hipkins says the debate didn't reflect well on Parliament or the people involved, and Jacinda Ardern will release a statemen...
Share
Mark as Played

Kerre McIvor: Trevor Mallard should make his accusations without the protection of privilege

May 5, 2021 • 7 min
The Speaker of the House needs to go.
He has continued a vendetta against a former staffer, a man he labelled as a rapist - a claim that cost taxpayers more than $330,000.
We paid Mallard's $175,000 legal fees, this is a man who earns $296,000 per year plus expenses and who has been paid by the taxpayer since he was MP for Hamilton West since 1984.
You'd think he'd have enough stashed away to cover his own legal bills, ...
Share
Mark as Played

Bruce McGechan: Selling your business without any regrets

May 4, 2021 • 9 min
There's a very interesting piece in the Business Herald written by Tamsyn Parker.

Bruce McGechan is an entrepreneur and business exit planning expert, who has written a book about selling your business without any regrets.

May 2, 2021 • 9 min
Politicians criticising a Government Minister for attending a Mongrel Mob event are being told to come and visit for themselves.?
The Green Party co-leader Marama Davidson and Human Rights Commissioner Paul Hunt attended a gathering at the Hamilton gang HQ on Saturday.
They discussed human rights, justice and racism in front of a room of patched members.
It's sparked criticism from National and ACT Party MPs, but Waikato Mongrel M...
Share
Mark as Played

May 2, 2021 • 3 min
Politicians criticising a Government Minister for attending a Mongrel Mob event are being told to come and visit for themselves.
The Green Party co-leader Marama Davidson and Human Rights Commissioner Paul Hunt attended a gathering at the Hamilton gang HQ on Saturday.
They discussed human rights, justice and racism in front of a room of patched members.
It's sparked criticism from National and ACT Party MPs, but Waikato Mongrel M...
Share
Mark as Played

April 29, 2021 • 9 min
Carmel Sepuloni says her ministry could keep better track of how much its paying out for damaged motel rooms.
The Social Development Minister fronted to Kerre McIvor after reports from RNZ that unknown sums of money has been paid to moteliers over damage caused by emergency housing tenants.
McIvor described it as "wanton disregard for taxpayer dollars".
"I really, really don't mind paying higher taxes when I know the m...
Share
Mark as Played

Kerre McIvor: I support funding GP visits - but who will pay for it?

April 28, 2021 • 8 min
Why is it that children only ever seem to need a doctor after hours??
When my daughter was little, it was ear infections.? She didn't get them all that often - about twice a year - but it was always at night time and I would have to head along and pay through the nose for an after hours medical service.?
It can cost nearly $100 to visit an after hours practice and that's money a lot of people simply do not have.? And that'...
Share
Mark as Played

April 21, 2021 • 4 min
There was quiet, just for a moment, as hundreds of people standing in the intersection at 38th Street and Chicago Avenue crowded in to listen to the news.
“They’re announcing the verdict!” someone shouted, calling for silence.
Then thunderous cheering filled the place where George Floyd was pinned beneath a police officer's knee nearly a year ago, begging for air and his mother. Many people wept. Some sobbed.
They were cheering th...
Share
Mark as Played

April 19, 2021 • 6 min
A group of 12 elite English, Spanish and Italian clubs dramatically split European soccer on Sunday by announcing the formation of a largely-closed Super League. They are leaving the existing UEFA-run Champions League structure despite warnings they could be kicked out of their domestic competitions and face legal action.
The seismic move to shake up the world's biggest sport is partly engineered by the American owners of Arsena...
Share
Mark as Played

April 19, 2021 • 8 min
Nanaia Mahuta's speech on China isn't likely to have come as a surprise to Chinese officials.
In a speech to the New Zealand China Council, the Foreign Minister says we need to diversify, and develop other trading relationships.
The Foreign Minister says it won't be a shock to exporters that we need to become less reliant on China for trading.
She says big exporters are already thinking of building resilience into their bu...
Share
Mark as Played

April 16, 2021 • 8 min
The latest report from the Environment Ministry highlights concerns that highly productive agricultural land is being being eaten up by housing developments.
The area of highly productive land lost to housing increased by 54 percent between 2002 and 2019.
This will only increase as demand for land grows as our population grows.
So just how do we provide quality urban housing that people want to live in?
Scott Cracknell from Context Arc...
Share
Mark as Played

April 15, 2021 • 8 min
And here we go again.
We find that a border security guard has not been tested since last November and that there is no system in place to ensure front line border workers are in fact getting their tests and their vaccinations.
MIQ authorities have relied on individual employers and paper trails to ensure workers are complying and the PM has laid the blame fairly and squarely on the security guard involved – which has shades of the ...
Share
Mark as Played

Dr Dennis Wesselbaum: Economist calls out Government for interfering with the Reserve Bank

April 14, 2021 • 12 min
Claims of a Government attack on Reserve Bank autonomy.
An economist is criticising the unprecedented pressure over property inflation.
Finance Minister Grant Robertson asked the bank in February to act to support sustainable house prices.
Otago University's Dennis Wesselbaum told Kerre McIvor it's raising red flags.
"Former US Presidents Nixon and Trump tried to interfere in monetary policy, and it has been seen in Turkey....
Share
Mark as Played