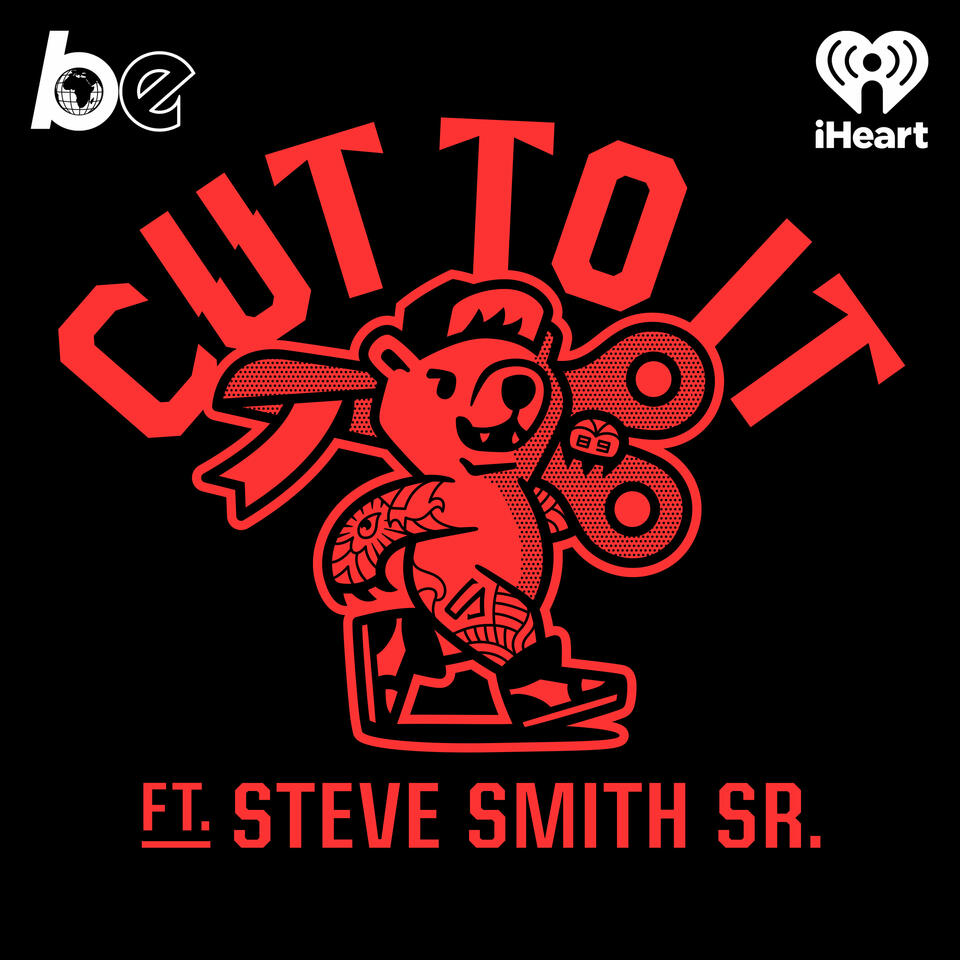 Former NFL player Steve Smith Sr and co-host Gerard Littlejohn interview your favorite athletes, entertainers, and more, to ask the questions that you’ve always wanted to know, but no one ever asks. You may learn if your favorite NBA player would rather fight a bear or 50 ducks, or why a guest made a life-altering decision they’ve never shared before. Expect the unexpected....let’s cut to it!

WWE superstar Angelo Dawkins is in the studio to dive into what earned him
the nickname “The Curse of Greatness.” Though his is a great story, Steve still can’t
decide if the most surprising part is that Dawkins is still a Bengals fan.

IndyCar racer Scott McLaughlin joins the studio to share how he made it
from New Zealand to the states. Tune in to hear what he’s learned about American
racing, culture, and— thanks to Steve— dry-snitching.

Steve and Backstage Joe invite friends Anthony Hill, Kurt Coleman, and
Hilee Taylor to unpack how being a son made them a better father. This episode, we
celebrate our highs and lows, and learn how far “unqualified compliments” can take the children we raise up.

We’re cuttin to it with “Big Play Slay,” the dynamic cornerback for the Philadelphia Eagles. This episode, Slay gets into his confidence on the field, then takes Steve down memory lane when he talks about respect between the lines.

NFL Network host Rachel Bonnetta is known for her endless amount of creativity and energy onscreen, but this time we get to know more about what she went through to build the person we see on TV. Bonnetta is a testimony to the fact that where there’s strength, there was a struggle.

NASCAR driver Harrison Burton has racing in his blood. In case his family tree or impressive track record isn’t enough to prove it, he’s in the studio to talk about superstitions, and being the new kid on the track.

Producer, writer, and entrepreneur Bomani Jones shows us
there really isn’t anything he can’t do. Well, except pick out curtains. According to Steve, we can defer to him for good buying practices and bad dad jokes.

Cut To It: JERMICHAEL FINLEY

The Black Effect Presents.... Cut To It.

Former NFL tight end Jermichael Finley is cutting to it with Steve and G. This episode, the Texan-native shares how one injury changed his whole life and what it means to see ball as your only way out.

Former NFL running back and longtime friend, Justin Forsett, shares memories he has of Steve on the field, plus how he transitioned off the field to founder and CEO of HustleClean. If there’s one thing he can testify to, it’s that Steve really knows how to pick his friends… his snack choices, however, are still questionable.

Steve Smith Sr. returns to the University of Utah for the inspirational story of Utes linebacker Devin Lloyd, who led the team to its first Pac-12 title in honor of two beloved teammates killed by gun violence. Steve is joined by NFL 360 producer Trent Cooper to talk about his the story came to be told, and why Steve was the perfect person to tell the story.

Three Carolina Panthers fan favorites are in-studio to talk ball and dive deep into the different environments that led them to similar paths. This episode, tune in to hear the guys cut to it with Tre Boston and Kurt Coleman – you will never think of a “yes” man the same way.

The guys Cut To It with The Food Network's Dana Beninati to get the inside scoop on what it's like to work in some of the world's hottest food destinations.

Former Florida Marlins President and now host of his own podcast, Nothing Personal, David Samson cuts up in the studio with Steve and G. The guys learn the importance of avocado selection, decaf coffee, and most importantly, what it’s like being born on third base.

NBA legend Charles Oakley joins the studio to talk about his book, The Last Enforcer, the city that raised him, and how tough love and generational gaps may leave some things lost in translation.

Former NFL running back Ronnie Brown has forged his own path

since he became the first to leave his small town and head off to play college ball.

Several NFL seasons later, he joins the Cut to It crew to explain how he

transitioned into corporate America and goes tit-for-tat with Steve’s digs.

From his career on the field to today, he’s always kept his head in the game and his chin high. Former NFL running back and three-time Super Bowl champion, LeGarrette Blount, sits down with Steve and G to talk ball and CBD, plus how he’s learned to ignore the people who still try to pin him with a bad reputation.

Former UFC Middleweight Champion Chris Weidman reports from life outside the ring, reflects on the ups and downs of his legendary career, and shares why he is ready to get back into the ring. This episode, we talk about keeping yourself motivated and finding your new “why.”

The one and only Baylee Smith joins the studio to dish out some dirt on Papa Smitty. Then, UFC Champion Chris Weidman joins the crew to discuss the 2022 NFL Combine and how to scout an opponent on the field, or in the Octagon.

Steve, G, Backstage Joe and Jonathan Stewart sit down in the studio for a special roundtable to compare life in the NFL to life in corporate America. Prepare for both similarities and differences that might surprise you.

Jeremy Bloom began his athletic career as an Olympian skier, ended it with an impressive stint in the NFL, then didn’t miss a beat before he decided to start his very own business empire from the ground up. This episode, Jeremy joins the guys to share his secrets to his success. Plus: he’s no Olympian, but one of our own reminds us that Bloom isn’t the only football player who hits the slopes— that’s right, Steve’s on skis.