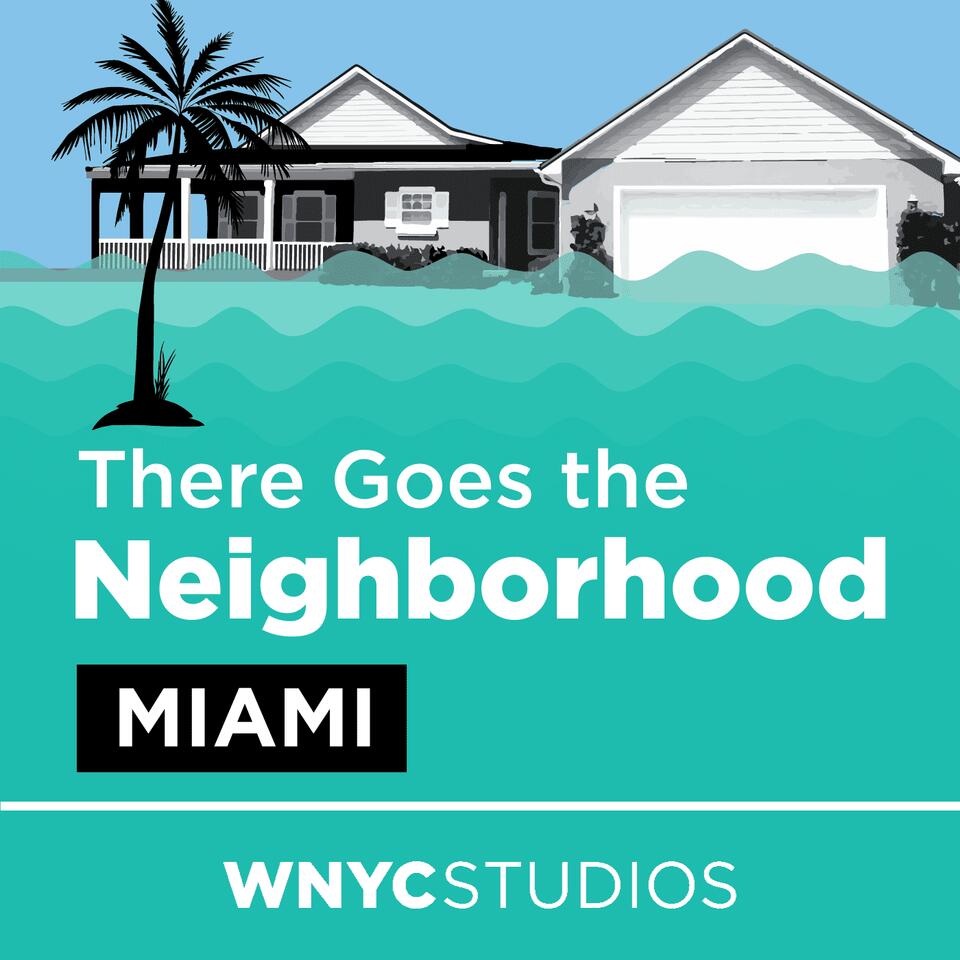 There Goes the Neighborhood

A podcast about how and why gentrification happens. Season 3, produced in partnership with WLRN, Miami’s public radio station, introduces us to “climate gentrification,” reporting about the ways climate change, and our adaption to it, may seriously intensify the affordable housing crisis in many cities. In many parts of the US, black communities were pushed to low-lying flood prone areas. As Nadege Green reports, in Miami, the opposite is true. Black communities were built on high elevation away from the coast. Now because of sea level rise that high land is in demand. WNYC Studios is a listener-supported producer of other leading podcasts including Radiolab, Snap Judgment, Death, Sex & Money, 2 Dope Queens and many others.© WNYC Studios

Welcome to 'There Goes the Neighborhood'

There Goes the Neighborhood takes an in-depth look at gentrification in Brooklyn and the integral role that race plays in the process.

Developers from all over the globe are hunting New York City, looking for deals that will allow them to “revitalize” neighborhoods, and make a few bucks in the process.

But to many tenants and homeowners, it feels like a violent shove out of the way, especially for black and brown Brooklynites who h...

Gentrification is something everyone is talking about -- and the conversation is often heated. It's a complicated idea with a range of factors: race, class, history, policy. And of course there is the personal experience that we each bring to the table.

Take a walk in Bedford-Stuyvesant with Monica Bailey, a resident of the neighborhood for more than 30 years. She'll show you the home she lost.

Monica Bailey was forced to...
Mark as Played

East New York is the first neighborhood Mayor Bill de Blasio targeted for comprehensive rezoning -- and it's the neighborhood that saw real estate investments jump from $2.7 million in 2013 to $42 million in the first half of 2014 alone.

But since the 1960s, outsiders have known East New York for its low median income and high crime rates. So what's it been like all those years for the people who call it home?

With his first rezoning plan, Mayor de Blasio has declared East New York the place where the city's future begins. But what does East New York's past look like?

This week we go back to the founding of East New York in order to understand how it became the place it is today. We meet the people who have been organizing since the 1960s when the neighborhood underwent radical changes.

And we'll revisit the blistering summer...

Mayor de Blasio's plan to rezone East New York and 14 other neighborhoods is his administration's way of controlling the fierce gentrification machine that is steamrolling across the city. So what does the zoning plan for East New York actually look like?

This week we talk with WNYC's Jessica Gould and City Limits editor Jarrett Murphy to understand the nuts and bolts of the plan.

And we go deep into the gentrification ...

You Can Kick This Woman Out of Williamsburg, But She'll Come Back

When developers tried to force Tranquilina Alvillar out of her Williamsburg apartment of 25 years, she fought them—and won.

While politicians and developers strategize how to control the changes in New York, we want find out what gentrification feels like on the ground. How does a tidal wave of money and fast-shifting demographics affect the people who share a neighborhood? What role does race play when it comes to deciding who is included in a community — and who is excluded?

We start on the west coast in San Francisco, where Alex Nieto was shot 14 tim...

In the fast moving world of Brooklyn real estate, for some it feels more like the Wild West – developers and investors looking to cash in on the gold rush don't always play by the rules.

Meet Tia Strother, she's a young mother whose family has been living in Bedford-Stuyvesant for five generations. Tia tells us how horrifying it was to learn that her 90-year-old great grandmother was convinced to sign away the family home t...

Some Brooklynites are wrestling with their own role in gentrification. Changes may be welcomed, but they come with mixed emotions for many. This week we take a walk in Bed-Stuy with 14-year-old Corrine Bobb-Semple. She's grown up in the neighborhood and for the last few years she's been reconciling the changes in her neighborhood with her experiences at St. Ann's, the elite prep school in Brooklyn Heights where she is s...

Gentrification has many New Yorkers asking the same question: Is there still a place for me in this city? We meet Dr. Ron Dailey who's been practicing medicine in Brooklyn for two decades, all the while watching long time patients leave the city, one after another. We meet New Yorkers fighting to stay and others who have made the decision to go.

And we check in with East New York, the neighborhood where Mayor de Blasio's re...

There Went the Neighborhood

The team behind There Goes the Neighborhood talks about what they've learned throughout the process of making the podcast, and how to move forward in a post-gentrified Brooklyn. Where do we go from here? How do we reconcile with what now seems the inevitability of gentrification not just in Brooklyn, but nationwide?

Welcome to the United States of Anxiety

Listen to a preview of what's to come in The United States of Anxiety podcast from WNYC Studios and The Nation Magazine. Listen to the first episode on September 22nd. Subscribe today.

The United States of Anxiety is an in-depth look at the human stories underlying this year's presidential election.

Too often, political reporting tells us how voters feel about the issues, but now why they feel that way. And in this ele...

East New York, Did It Work?

Mayor de Blasio is running for re-election and affordable housing remains one of his signature issues. If his plan for East New York is a measure of the merits of his approach, how's it working out? Kai Wright brings us back to East New York to check in on how the Mayor's plan to leverage the force of gentrification for good is working a year and a half later.

Los Angeles, You're Next

Season 2 will dig into how Los Angeles has gone from being the place to chase your dreams to the least affordable city in the country. Housing prices are soaring, developers and landlords see opportunity, and many longtime Angelenos are getting squeezed out. In this episode, meet some of the characters you'll hear about in the upcoming series.

Season 2 is produced by KCRW and WNYC Studios and is hosted by KCRW's Saul Gonzal...

All These People Moving In, New Buildings, New Apartments

Southern California was built on the sale of sunlit homes in affordable real estate developments. But the many building booms of the past century haven't been enough. In just the past 15 years, Los Angeles has added 230,000 new residents, but only 40,000 new homes. The median cost of a home in L.A. has doubled in the last five years. Rent climbs ever upward. So, who is L.A. for?

I Didn’t Want to Evict You

At one aging apartment building in Rampart Village, tenants are fighting hard to stay in their homes. Their new landlord wants to replace them with people who can pay a lot more to live there. Each side represents financial ruin to the other. See you in court.

This Is a Black Neighborhood. You Aren’t Black.

In Inglewood, developers are building new luxury housing close to tech-job centers near the beach. Rents are rising and black residents watch nervously as white home-buyers move in. For Inglewood resident Erin Aubry Kaplan, the change would mean an increase in her home’s value but at the expense of a unique cultural space.

They Want My House

Once you know what to look for, they're everywhere. In mostly Latino and black neighborhoods, rows of aging houses with wrought-iron fences, their yards overgrown and concrete crumbling, are punctuated by homes with distinctive 2017 aesthetics. The fresh earth-toned paint job, burnished silver house numbers, horizontal fencing, drought-tolerant native grasses in the yard: it's a flipped house and it's probably selling f...

Change the Name of the Arts District to the Luxury District

Are artists victims of gentrification? Or the perpetrators of it? Artists move into empty post-industrial spaces and poor neighborhoods, save on rent, create their work, build up studios and communities — and then find they're priced out.

Lisa Adams was evicted twice from L.A.'s downtown Arts District and is worried it's about to happen again. Thirty years ago the area was home to light manufacturing and warehouses. N...

Gentrification isn’t just about who’s moving into the neighborhood. It’s about juice bars, yoga studios, fancy pizza and of course coffee shops. What’s it like to open a business that neighbors will clearly recognize as a symbol of change?

In Echo Park, Israel Palacios had to move his pizza restaurant after his rent got too high. His family had run the restaurant for more than 20 years. He reopened his business at a cheaper site ac...