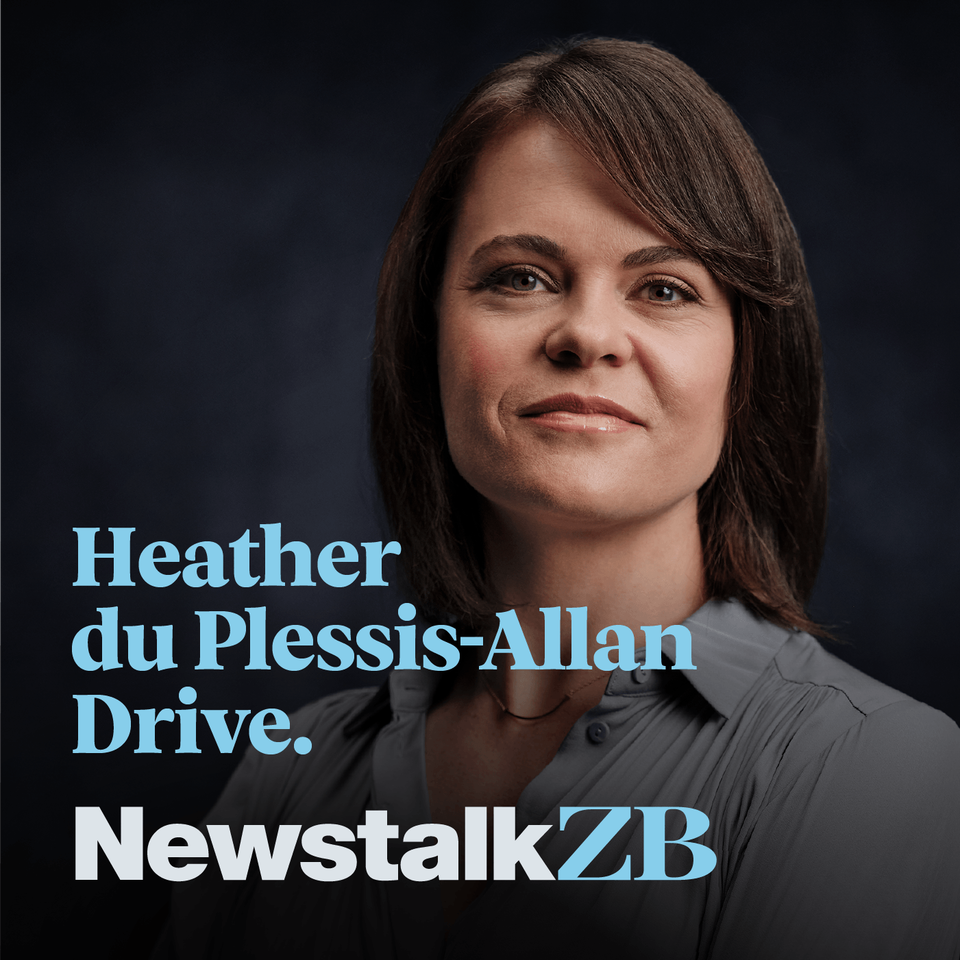 With a straight down the middle approach, Heather du Plessis-Allan Drive on Newstalk ZB delivers the very latest news and views to New Zealanders as they wrap up their day.

September 20, 2021 • 2 min
After this move to level 3 today, we all need to accept the possibility that we never get rid of covid in the community again.  Today might be the day we ended the so-called “elimination” strategy.
Clearly, getting us back to zero is no longer the sole focus of this government
If it was -  if their aim was to stamp out this outbreak altogether – Auckland would be staying in level 4 until we got to zero or close to it.
But we’re ...
Share
Mark as Played

September 20, 2021 • 9 min
Auckland will move to alert level three from midnight tomorrow.
Deputy Prime Minister Grant Robertson says he's feeling confident that the situation for Auckland is still a level with plenty of restrictions in it.
He says some people can go back to work, a few people will be moving around, but it is still a restrictive level - with bubbles still in place and schools largely not open.
LISTEN ABOVE
Share
Mark as Played

Sir Ian Taylor: Workers could be tested overseas rather than go through MIQ

September 20, 2021 • 5 min
A top businessman is urging the Government to ease demand on MIQ by allowing loosening travel restrictions.
More than 25-thousand people logged into a virtual lobby today to clamour for one of three-thousand MIQ vouchers.
It was the first room release in weeks -- and only four-thousand more will be released each fortnight until Christmas.
Animation Research Limited Chief Executive Sir Ian Taylor says it's made it near impossible t...
Share
Mark as Played

Matt Walsh: Tai Webster released from the Breakers due to not being vaccinated

September 20, 2021 • 2 min
The New Zealand Breakers have agreed to release Tai Webster after the star guard refused the Covid-19 vaccine.
Webster, the breakout star from last season, inked a new two-year contract with the Breakers in July but will no longer be with the club after he decided not to get vaccinated due to "personal reasons".
Breakers owner Matt Walsh says the decision was mutual.
The Breakers look set to start the upcoming ANBL season sche...
Share
Mark as Played

Allan Sanson & Paul Dennehy: How did an Auckland inmate get bailed to Waikato?

September 20, 2021 • 4 min
Waikato District's Mayor says it's an unsettling time for communities impacted by a "bespoke" Alert Level Four.
A Section 70 notice is now in place for people who live, work or have travelled through the Mangatangi area since September 8.
It obliges them to stay home at least five days, to allow testing and contact tracing.
It comes after a Covid-positive prisoner was remanded to the area, and three household contacts ...
Share
Mark as Played

Shaun Hendy: How long Auckland is in level 3 depends on contact tracers

September 20, 2021 • 3 min
An expert says the million-dollar question is how long Auckland will stay in Level Three.
The region moves down a level from midnight tomorrow.
Covid-19 modeller Shaun Hendy says contact tracers have had an epic five weeks, and it's now in their hands to close out this cluster.
He says we'll know in a couple of weeks whether that's worked.
Hendy says the alternative is an extended level three while we wait for vaccine rollo...
Share
Mark as Played

September 17, 2021 • 6 min
The America's Cup may just return to New Zealand after all.
After the deadline for hosting was delayed with no solid deal in place, Mark Dunphy has made a formal offer to Team NZ and Grant Dalton to host the next competition in Auckland.
Meanwhile, ahead of the weekend's Rugby Championship, former England coach Sir Clive Woodward has slammed South Africa's style of play.
Woodward, who coached England to the 2003 World Cup,...
Share
Mark as Played

September 17, 2021 • 4 min
Italian workers in both the public and private sectors must display a health pass to access their workplaces from Oct. 15 under a decree adopted Thursday by Premier Mario Draghi’s broad-based coalition government.
The measures are the first by a major European economy requiring proof of vaccination, a recent negative virus test or recovery from COVID in the previous six months for all categories of workers.
“The Green Pass is an inst...
Share
Mark as Played

Rosann Conolly: It will be interesting to see how Bali can sustain a backpacker free model

September 17, 2021 • 2 min
The Indonesian Government is planning to ban backpackers from travelling to Bali when their borders reopen.
They're aiming for 'quality tourism’ so won't allow backpackers to enter the island.
Travel agent Rosann Conolly told Heather du Plessis-Allan it'll be interesting to see if Bali can sustain this.
“You need to look at the likes of Kuta. Now this is largely a backpackers market. What will this region be suffering...
Share
Mark as Played

Nanaia Mahuta: Preference not to have nuclear-powered vessels in NZ respected

September 17, 2021 • 5 min
New Zealand's none too pleased at the prospect of nukes in our waters.
The United Kingdom, United States and Australia have signed a three-way military deal to counter Chinese influence in the Asia Pacific.
The first initiative is to supply nuclear submarine technology to Australia.
Foreign Affairs Minister Nanaia Mahuta told Heather du Plessis-Allan the Pacific has a long held position of staying nuclear-free.
“We’ve expressed thi...
Share
Mark as Played

Mark Dunphy: Formal proposal made to Team NZ and Grant Dalton to host next America's Cup

September 17, 2021 • 6 min
A Kiwi businessman is adamant the next America's Cup will stay in New Zealand.
An entity linked to former investment banker Mark Dunphy is offering to provide short term funding to defend the Auld Mug in Auckland.
Dunphy told Heather du Plessis-Allan they've made a formal proposal to Team New Zealand and chief executive Grant Dalton.
“There are communications and we’re just so keen to get around the table with them. No interme...
Share
Mark as Played

September 17, 2021 • 4 min
American officials are defending a new deal to provide Australia with nuclear-powered submarines after French officials expressed frustration over the agreement's effect on an existing multibillion-dollar defense deal.
The effort to provide Australia with nuclear-powered submarines -- a major step toward countering China as President Joe Biden works to build international backing for his approach to Beijing -- is part of a new t...
Share
Mark as Played

Greg Cornes: Balancing reopening with kids home for school holidays will be hard

September 17, 2021 • 3 min
An Auckland Cafe owner's grilling Government for not shifting Auckland's school holidays.
The Education Ministry says sticking with the rest of the country is less disruptive to educators and learners and means term four won't be extended.
But parent, and owner of bagel-chain Goodness Gracious, Greg Cornes isn't pleased.
He told Heather du Plessis-Allan having to balance reopening the business with kids at home will be...
Share
Mark as Played

Anna Leask: Mother is a suspect and police aren’t looking for anyone else

September 17, 2021 • 3 min
The bodies of the three little girls killed in Timaru have been removed from the scene.
Three siblings, twins aged three and another aged seven, were killed at a Queen Street address last night.
NZ Herald crime reporter Anna Leask told Heather Du Plessis Allan it's understood the mother is a suspect and police aren't looking for anyone else.
“She was taken to hospital last night. They haven't discussed with us any charges,...
Share
Mark as Played

David Crawford: Government's 2026 and 2027 goals for CO2 emissions are impossible to meet

September 17, 2021 • 4 min
The Motor Industry Association has withdrawn its support for the Government’s Clean Car Standard.
They say it wants to support policies to reduce CO2 emissions but this bill is poorly designed and will be impossible for the industry to meet.
It also says the bill will maybe push up new car prices by 15 to 20 percent.
Motor Industry Association CEO David Crawford told Heather du Plessis-Allan the targets for 2026 and 2027 are ahead of ...
Share
Mark as Played

September 17, 2021 • 2 min
It looks like Grant Dalton might just need New Zealand after all.
Today was supposed to be the deadline for Team New Zealand to announce where it will holding the next America’s Cup.
But they’ve had to delay the announcement because none of the deals have come through in time.
Which suggests that perhaps the America’s Cup is not quite the sought-after event that Dalton thought it was, or at least, perhaps not on the terms he’s looki...
Share
Mark as Played

September 16, 2021 • 4 min
The head of Greenpeace says it doesn't make sense to delay important climate change plans.
The government has pushed back its Emissions Reduction Plan by six months.
It's due to the inability to consult with key players relating to the plan during the Covid-19 outbreak.
Executive Director of Greenpeace Russel Norman says the process could've been done online.
Norman says most people would have used the internet to engage wi...
Share
Mark as Played

Heather du Plessis-Allan: Collins has got to go

September 16, 2021 • 3 min
When it rains it pours, and it’s pouring for the National Party isn’t it?
21% in that poll last night is horrific, but given the horrors of the last couple of weeks, really no surprise.
This does nothing but reinforce the same point that we keep making, which is Collins has to go. At some point.
Why don’t we just deal with the thing that you want to know: Who takes over?
From what I can see you got two realistic options that are ...
Share
Mark as Played

September 16, 2021 • 6 min
Name suppression has been brought into the spotlight this week. Europeans are 3x more likely to be granted name suppression that Māori.
But is the because 3x more Europeans apply?
University of Canterbury, Dean of Law Professor Ursula Cheer says unless proper empirical investigation is done, we won’t know if there is bias.
LISTEN ABOVE
Share
Mark as Played

September 16, 2021 • 1 min
Five Wellington students are developing a paper stick to test for spiked drinks.
The prototype turns brown, when doused with a sample of a drink with rohypnol present.
Wellington East Girls' College's Ava Richardson-Lane says now they're working on making the stick itself less toxic and safer to use.
LISTEN ABOVE
Share
Mark as Played