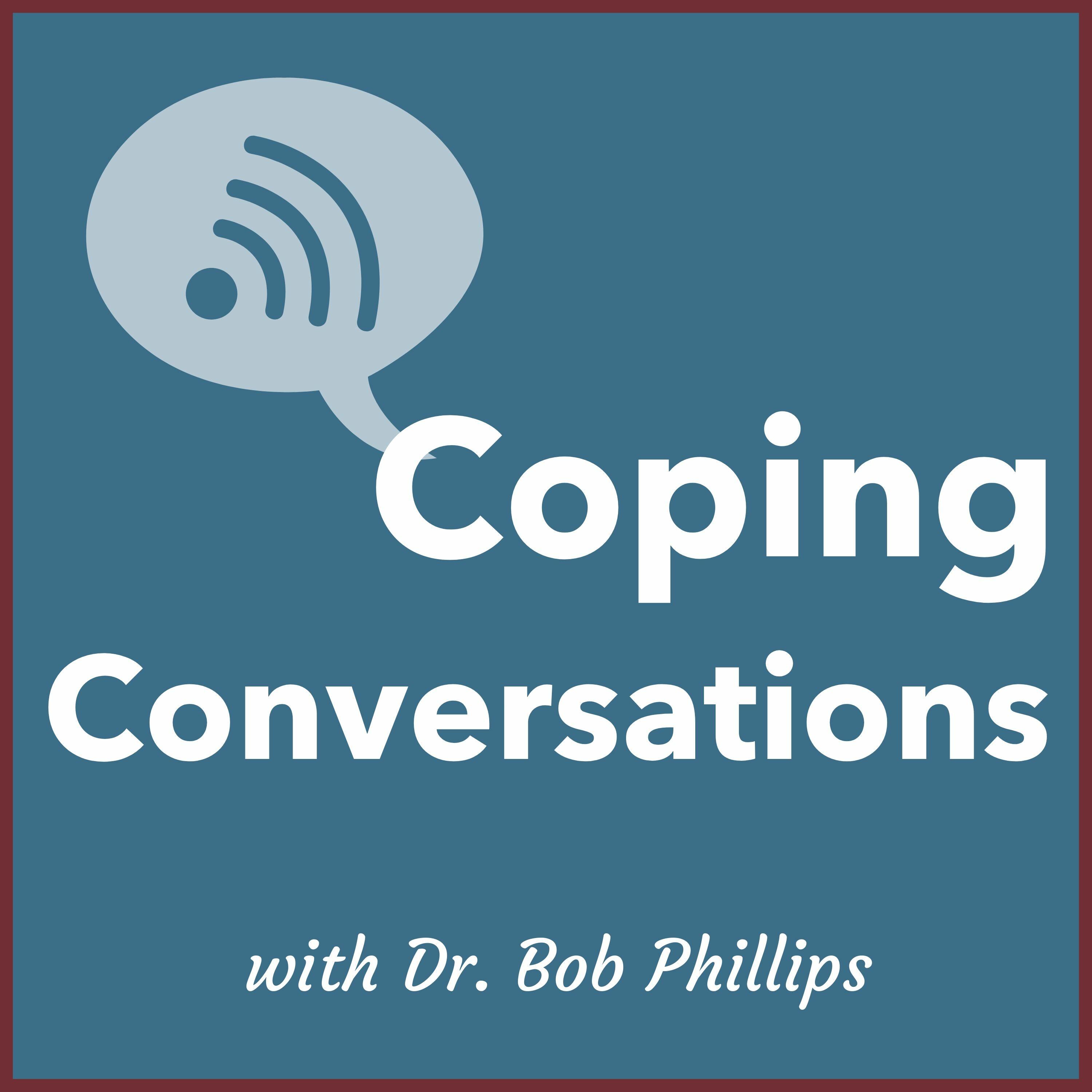 "Coping Conversations” is hosted by internationally renowned psychologist, Dr. Bob Phillips, and has been aired on radio stations and as a nationally available audio-streamed program since 1991. On each show, Dr. Phillips interviews a well-known celebrity or expert, bringing the listening audience up to date on current appearances, performances, publications and other activities of interest. As the main focus, our listeners are always fascinated to hear about our guest’s interesting life experiences and successful coping experiences, hence the name "Coping Conversations"! The show invariably is positive, upbeat, and fascinating. Host Dr. Bob Phillips is also the author of more than 35 best-selling books, and the founder and director of the Center for Coping on Long Island, New York.... Show More

Do you remember the song “Seven Little Girls Sitting in the Back Seat?” How about “Happy Go Lucky Me?” Both of these songs were hits for guest Paul Evans. We discuss his music career, how he dealt with the ups and downs and changes in his career, and the success he has had writing songs as well as performing.

My guest is actress/singer Joanna Gleason, a Tony Award winner with numerous movie and television roles as well. We discuss her relationship with her father, Let’s Make A Deal’s Monty Hall, how acting has always been so important to her, and how a good attitude can help you cope with anything!

My guest is a versatile actor who is perhaps best known for playing the hated Douglas C. Neidermeyer in the classic hit movie, "Animal House." We discussed how this role came to be, the difficulties he's had with stereotyping, other joys in his life, and his goals for the future.

One of the most popular television sportscasters in New York television history, Len Berman has covered virtually every major sporting event during his 40-year career.

Now a co-host on morning radio in NY, we discuss his changing role in broadcasting, how sports help us cope, the difficulties he’s encountered in his career, and more.

My guest is legendary television and radio host, Larry King. Over the past 30 years, he has been suffered and coped with, numerous medical problems. In this archived show, taped in 2015, we discuss his first heart attack in 1987.

Judy Tenuta is not only a very funny comedienne, she's an actress and an author. We discuss her career, how her large family contributed to her strengths, how she's coped with difficult things in her life, and her memories of Joan Rivers and George Carlin, among others.

Former New York Knicks star power forward Anthony Mason, who sadly passed away in 2012, is my guest. We discuss his career, how he coped with injuries, how his attitude always helped him, his views on the difference between basketball past and present, and how his career grew out of his playing day experiences.

My guest is best known as Maryann on the classic television show, "Gilligan's Island." We discussed the reasons for the lasting power of the show, how the values presented continue to be important, and how she continues to be productive in the industry. We also discuss her new book and her new television series.

Best known as the mother on the hit TV series "The Waltons", my guest is a four-time Emmy award winner, television, stage, and screen actress, Michael Learned. We discuss her acting career, as well as some of the difficulties she's encountered in her life. We also discuss how she came to be named Michael!

This fascinating show with Lainie Kazan was originally recorded and aired in 1995! It has been digitally remastered and this is the first time it's been available on this website.

Having starred in "The Nanny" and, subsequent to this recording, "My Big Fat Greek Wedding", among many other things, you'll enjoy this vintage program with Lainie.

In this new solo podcast, Dr. Phillips discusses strategies for getting through this unique holiday season while still in the midst of the pandemic.

Do you remember the song "How Much Is That Doggie in the Window"? One of the most popular songs of all time was a hit for my guest, the late Patti Page. One of the music industry's best-selling singers, also known for her hits "Cape Cod", "Tennessee Waltz", and "Hush Hush Sweet Charlotte", we discuss a career that has lasted more than five decades, as well as some of the difficulties she has endu...

My returning guest has appeared in more than 200 movies and television shows, including playing the mother in the movie E.T. We discuss what she’s up to as an actress as well as her career as a healer.

This show, originally aired in 1998, features one of the most popular stage, screen, and television (“The Odd Couple”, “Quincy, M.E.”) stars of all time. At the time of this taping, he was 76 years old (he died in 2012 at age 90), and, following surgery for throat cancer that removed a vocal cord, had resumed performing! We discuss his condition, the surgery, his positive attitude, as well as his career.

My guest played Potsie Webber on TV's Happy Days. We discuss how he's been coping, and helping other people cope, during the pandemic.

My guest is actor Hank Garrett, perhaps best known for his roles in the TV sitcom Car 54, Where Are You and the movie “Three Days of the Condor”. We discuss his complex career and his new book, “From Harlem Hoodlum to Hollywood Heavy.”

Happy Days star Don Most is my guest. We discuss his role of Ralph Malph, as well as new upcoming projects, and how he’s dealing with the pandemic.

This archived show, originally taped in 1995, features one of the most popular actors of all time, known for his work on stage, screen, and television. Perhaps best known for his work on TV’s “The Odd Couple”, Tony Randall (who died in 2004) has a unique insight into show business and performing. His love of the arts, and his perceptiveness and sense of humor, make this a fascinating show.

This show with the late Broadway actress (“Company”), movie (“Monster In Law”) and television star (“30 Rock”) Elaine Stritch is both humorous and touching. We discuss Elaine’s alcoholism as well as her diabetes, and learn how her positive attitude helped her with both… and more.