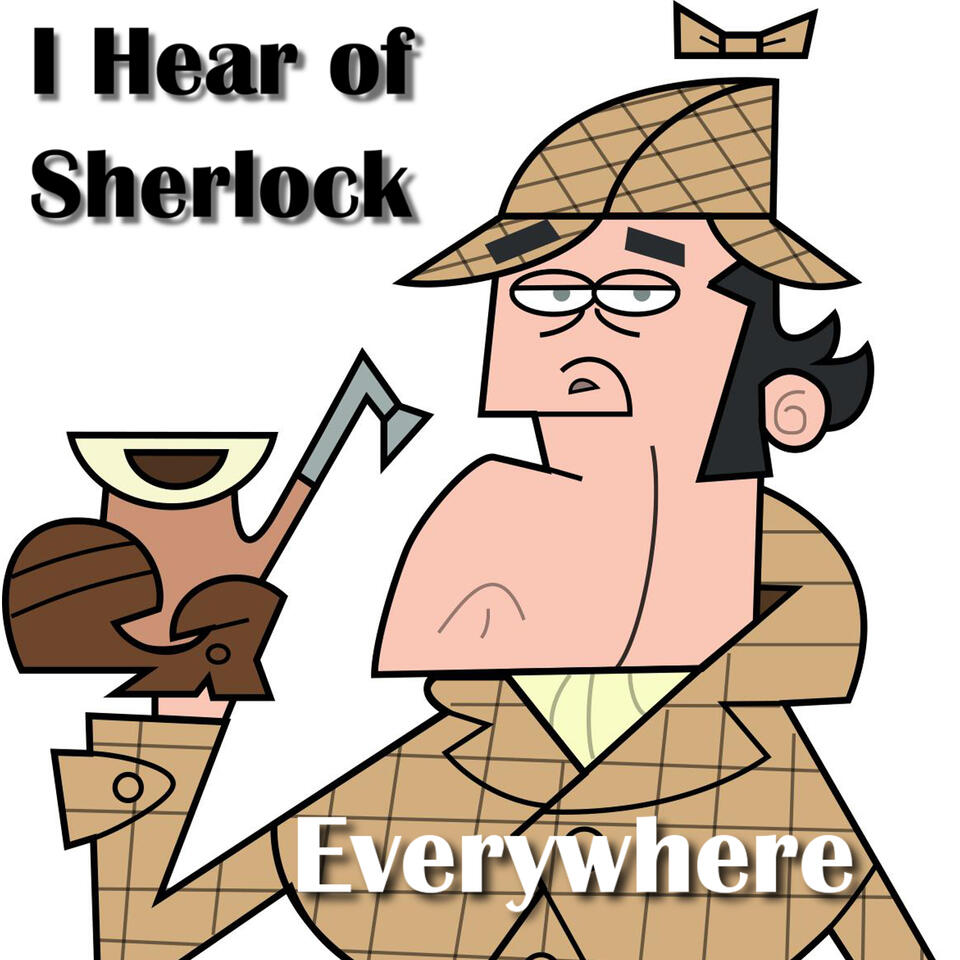 I Hear of Sherlock Everywhere

It's like Fresh Air meets Car Talk for Sherlock Holmes fans. Find out what's going on in the world of Sherlock Holmes, including books, pop culture, Sherlock Holmes societies around the world, and a reflection on how this great character has inspired generations of dedicated literary and non-literary types alike. Entirely interview-based, IHOSE airs twice a month: on the 15th and 30th. Subscribe today - it’s elementary!

As the curator of the Sherlock Holmes Collections at the University of Minnesota Libraries, Tim Johnson has seen just about everything. Almost as much as John Bennett Shaw saw.

When he was putting on his conferences and chatting with the various attendees, Shaw noticed something: there wasn't a definitive list of what every Sherlockian Library should have.

Based on his observations, ...

Before there was Jeremy Brett, there was Anthony Edward Brett. Like the modern-day television actor, he played Sherlock Holmes in over 40 films.

But you know him as Eille Norwood.

Most of his Sherlock Holmes films from the 1920s remain hidden from the public, so when the British Film Institute announced a major restoration project, we called Russell Merritt, BSI ("The Trepoff Murder") to enli...

Scuttlebutt from the Spermaceti Press

If there is one name that is synonymous with the Sherlockian hobby, it is Peter Blau, BSI, 2s. ("Black Peter"). And if there is one publication that is eagerly anticipated every month, it is his longstanding newsletter "Scuttlebutt from the Spermaceti Press."

For our 221st episode, we had to make it as deeply Sherlockian as we could. What better topic than The Baker Street Journal, the first (ir)regular publication about Sherlock Holmes scholarship?

First published in 1946, the BSJ is a stalwart in the Sherlockian community, and it's much more than scholarship. Steven Rothman, BSI, 2s. ("The Valley of Fear") has edited the Journa...

Rob Nunn found the Sherlockian world not long ago, and since then, our impression of him is one not too far from the name of our show: "We hear of Rob Nunn everywhere."

From winning the coveted Beacon Award from the Beacon Society in recognition of his work in the classroom involving Sherlock Holmes, to his involvement in a number of Sherlockian Societies in the Midwest and the crea...

When Ross Davies, BSI ("The Temple"), first published Sherlock Holmes content in his publication, The Green Bag, he had no idea what he was in for.

Let's just say that the response was enough to ensure that Sherlock Holmes got his own starring role in another publication, which became The Baker Street Almanac. Now in its fourth year, the BSA has become a go-to resource for tracking significant go...

It's a well-known fact that Arthur Conan Doyle went up against the legendary cricket player W.G. Grace on the field in 1900. But his interest in sport went much further than that.

From cricket to golf, motorcycles to auto racing, downhill skiing and more, Conan Doyle equated physical fitness with fitness of the mind and spirit. He even went as far as championing the British Empire concept ...
Share
Mark as Played

One of the latest books in the BSI Manuscript Series from the BSI Press is The Staunton Tragedy, the manuscript for "The Adventure of the Missing Three-Quarter."

Edited by Wiggins emeritus Michael F. Whelan, the book brought together Sherlockians of all stripes for a wide variety of essays about and related to the story. The story itself was fairly thin and didn't present any...
Share
Mark as Played

May 15, 2021
"It is with a heavy heart" [FINA]  The worlds of Sherlock Holmes and Arthur Conan Doyle enthusiasts have lost a giant. Jon Lellenberg, invested in the Baker Street Irregulars as "Rodger Prescott of Evil Memory" in 1974, passed away on April 24, 2021 after a short illness.   Jon's contribution to our hobby was almost too immense for words. He was a confidant and representative of the Conan Doyle Estate for many ...
Share
Mark as Played

The Sherlock Holmes Society at 70

One of the most well-known societies in the Sherlockian / Holmesian world is The Sherlock Holmes Society of London. Originally founded in 1934, the society lost steam for a few years and was permanently re-incorporated in 1951.

The 223B Casebook Series

"magnetism which drew good humour from all around him" [VALL]

It's not often that we talk bout the topic of humor on I Hear of Sherlock Everywhere. Regular listeners may strain to find humor in Burt and Scott's banter, but we're fans of humor here at IHOSE.

It's strange, then, that we find ourselves more than 200 episodes into this production without a nod toward Sherlockian parody. Episode 214 corrects that...

March 30, 2021
"a fair balance of military power." [SECO]  The BSI Professions Series marches on, this time in military time. The latest volume in the series is Corporals, Colonels, and Commissionaires: Military and the Sherlockian Canon, edited by Michael Quigley, BSI ("A Large, Brass-Bound Safe") and Marsha Pollak, BSI ("A Small But Select Library").   Together, they tell us the story behind the book: the curious case of...
Share
Mark as Played

March 15, 2021
"he does not care for general practice, which distracts him from his literary work" [MISS]  There must be something in the water. Or the air. Have you noticed an uptick of interest in Sir Arthur Conan Doyle lately?   We spoke with Mark Jones of the Doings of Doyle podcast last season. Since then, a new society has met, another has been formed, and an academic journal has begun its path.   To help us understand the impetus...
Share
Mark as Played

When you hear about Richard Ryan's writing projects, you might make an exclamation much like Watson did in the presence of Sherlock Holmes. The self-described "pantser" already had five books to his name on MX Publishing (The Vatican Cameos, The Stone of Destiny, The Druid of Death, The Merchant of Menace, Through a Glass Starkly) and is at work on his sixth, Three ...

When Vincent Starrett set out to write his cornerstone pastiche in 1920, it wasn't intended for an audience of Sherlock Holmes fans. For one, he didn't know of any others who were as fixated on Holmes as he was.

Fortunately, Richard Sveum, BSI ("Dr. Hill Barton") is well connected in the Sherlockian world and was able to tap the talents of other Starrett experts and enthusi...

Once upon a time, a man invited a group of his friends to join him for lunch and conversation about his favorite literary figure. Eighty-seven years later, the Baker Street Irregulars continues, but what about that early set of people?

Thanks to the incredible research skills of Linda and Terry Hunt, we know more about these 60+ people than we have in quite...

In our previous episode, we talked about some of the items in our collection, so we thought this time, we'd give you a glimpse into the collection of another Sherlockian as we launch Season 15 of I Hear of Sherlock Everywhere.

Charles Prepolec, BSI ("The Man with the Twisted Lip") is a Sherlockian whose collecting bug has run the gamut before settling on...

A Sherlockian Show and Tell

It's the end of 2020, and we thought it would be fun to interview each other about some of the favorite items in our collection. Even better: we thought we'd do it on live video.

In addition to pulling out some items that may make your raise your eyebrows (either at the value of the items or our mental state upon purchasing them), we talked about the nature of collecting, ...

It's not common thinking that a print publication would be needed in 2020, but Sherlock Holmes Magazine seems to have come along at just the right time.

Founder/editor Adrian Braddy joins us to talk about the inspiration for this well-produced and successful magazine that he launched earlier this year. It was a mixture of his background and experience, and his nearly life-...

While it's customary for us to utter "the game's afoot!" at the end of each episode, in this case it's more appropriate to say it as we commence.

We're joined by Dave Neale, researcher in play and psychology, writer and game designer. Dave is responsible for the the game Sherlock Holmes Consulting Detective: The Baker Street Irregulars.

In our wide-ranging c...