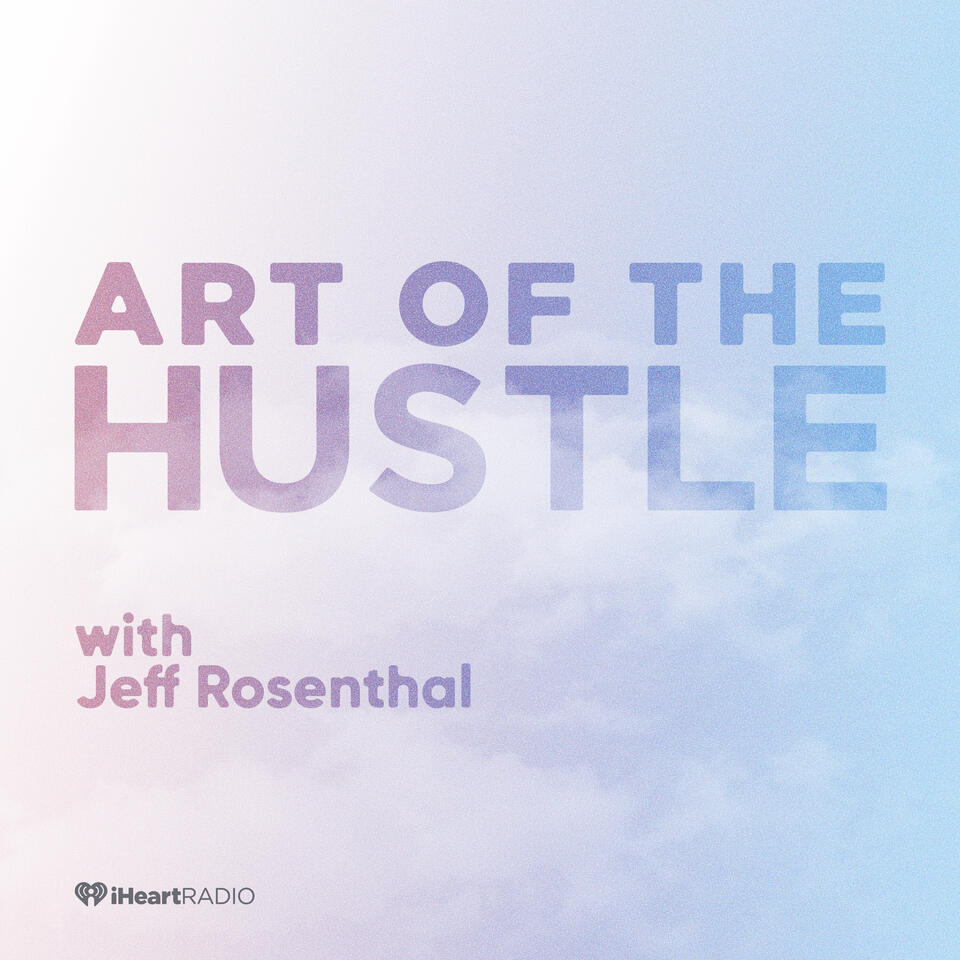 Art of the Hustle

iHeartRadio presents Art of the Hustle – a podcast designed to inspire entrepreneurs and fuel their life’s work. With a casual and comfortable interview approach, listeners are invited into a conversation between our host Jeff Rosenthal, co-Founder of Summit, and his guests, exploring stories of success, failure, milestone events and of course, key advice that shapes the life of an entrepreneur.

Kathryn has spoken at MIT and Harvard, contributed to the Wall Street Journal and Harvard Business Review, and appeared on TODAY and CNN, among others. Kathr...

Christina Sass is the co-founder and board member of Andela, a company that recruits the most talented software engineers on the African continent and pairs them with global tech companies as full-time, distributed team members.

In five years, Andela has hired almost 2,000 developers and become known as the "Best Place to Work in Africa," with tech campuses in Lagos, Nairobi, Kampala, and Kigali. Founded on the premise that ...

Kimbal Musk is a chef, restauranteur, and philanthropist. His mission is to pursue an America where everyone has access to real food. Named a Global Social Entrepreneur by the World Economic Forum, Kimbal is the co-founder and Chairman of three real-food companies that are rapidly scaling across the US.

The Kitchen Restaurant Group—including Next Door, Hedge Row, and The Kitchen, serve real-food at every price point. The restaurants...

Heather Hartnett is the founder and CEO of Human Ventures, an early-stage venture studio that backs and builds consumer technology companies. She was named one of the '50 Most Influential Women in America' by Marie Claire, The Information has referred to her as 'the new breed of VC,' and Business Insider has pointed to Human as the first female-led startup studio.

Chris has taught business negotiation as an adjunct professor at the USC...

Patrick Maloney is the founder and CEO of Inspire Clean Energy, where he leads the execution of its mission to transform the way consumers access clean energy and accelerate a net-zero carbon future.

A lifelong entrepreneur in the energy and technology spaces, Patrick is dedicated to building world-positive businesses that align profitability with purpose. He founded Inspire with the vision to answer the call of millions of consume...

Jessica Yellin is the founder of #NewsNotNoise, a fresh voice in media that provides daily news reports on Instagram. You can find the account @jessicayellin.

After graduating from UNC-Chapel Hill in the late 90s, Ravi Patel was an investment banker before a chance opportunity to do stand-up in Los Angeles left him fielding calls from agents. He went on to act in over 70 national commercials and land roles in films and TV, most notably Scrubs, It's Always Sunny in Philadelphia, and Master of None, before co-writing, directing, and starring in Meet the Patels, alongside his sister, Ge...

Michael Acton Smith is the co-founder and co-CEO of Calm, the #1 app for sleep, meditation, and relaxation, with over 2 million subscribers and 85 million downloads. They were an Apple 'best of 2018' award winner, and in 2019, Calm became the World's First Mental Health 'Unicorn' – valued at more than a billion USD.

In 1998, Michael co-founded the online gadget and gift retailer Firebox.com which became the UK&#...

Dr. Harvey Karp is one of America's most-trusted pediatricians and child development experts. He is also the founder and CEO of Happiest Baby, a smart-tech and parenting solutions company.

Having practiced pediatrics in Los Angeles for over 25 years, his landmark discoveries and unique ability to translate complex science into effective techniques have empowered parents and revolutionized our understanding of young children'...

George Gascón oversaw 9,000 officers as the Assistant Chief of the LAPD. In 2006, he famously squared off against Joe Arpaio and anti-immigrant groups as the Chief of the Mesa Police Department. And In 2011, after District Attorney Kamala Harris vacated her seat, he was tapped by Gavin Newsom to be the District Attorney of San Francisco.

Since his appointment, George has earned a national reputation as a visionary in criminal just...

Michael Hebb - Partner at RoundGlass, Author of Let's Talk About Death, and Founder of Deathoverdinner.org.

He's a Partner at RoundGlass, the founder of deathoverdinner.org and The Living Wake, the co-founder of MuslimNeighbor.com, and the author of Let's Talk About Death.

He currently serves as a Board Advisor at the Friedman School of Nu...

Jaisen Freeman - Co-Founder and Co-CEO of Phusion Projects, the maker of Four Loko, one of the most controversial and successful beverages of the past two decades.

Jaisen Freeman is the Co-Founder/CEO of Phusion Projects—the maker of Four Loko, one of the most controversial and successful beverages of the past two decades.

Starting with a big idea, passion, and some capital from a Small Business Administration loan, Phusion Projects has grown into a global business with more than 200 employees. The company has sold over $1 Billion in alcoholic products during its short history and has expanded...

Entrepreneur Kara Goldin is the founder and CEO of hint inc., the San Francisco-based company which produces the leading unsweetened flavored water.

She's also the host of the Unstoppable Podcast and author of her upcoming book Undaunted, which releases October 20th.

She has been named one of Fast Company’s Most Creative People in Business. Before Hint, Kara was Vice President of Shopping and E-commerce Partnerships at AOL, wher...

Walter Driver - Co-Founder, Chairman, and Co-CEO of Scopely, one of the fastest-growing mobile game companies globally.

Walter Driver is the co-founder, Chairman, and co-CEO of Scopely, one of the fastest-growing mobile game companies globally.

Walter joins us to discuss the art of understanding weaknesses and surrounding yourself with people that compliment your skillsets. We talk about the importance of confidence and the power of storytelling when it comes to selling your ideas, and how he envisions a future where we more closely interact and fost...

Scott Budnick - Founder, One Community Films and The Anti-Recidivism Coalition

Scott Budnick is the Founder of One Community Films, the Founder of the Anti-Recidivism Coalition, and one of the most successful comedy film producers in history.

Scott was the Executive Producer of the Hangover film franchise and via One Community Films, the producer of Just Mercy, the feature film that details the story of Bryan Stevenson, the founder of the Equal Justice Initiative.

Scott's work with the Anti-Recidivism Coali...

Matt Pohlson is the co-founder and CEO of Omaze, the online fundraising platform that offers people the chance to win once-in-a-lifetime experiences while supporting nonprofits worldwide. Since founding in 2012, the company has raised more than $130 million for more than 350 charities and was recently named one of "The World's 50 Most Innovative Companies" by Fast Company magazine.

Matt joins us to discuss his origin sto...

Over his thirteen-year career on the court, Baron was known as a powerful point guard with an electrifying style, garnering national acclaim for executing in critical, high-pressure moments.

As a businessman, Baron was one of the original investors in Vitaminwater and helped launch Thrive Market.

Baron is now the founder of several companies, including Sports and Lif...

M. Sanjayan is a global conservation scientist whose work spans genetics to wildlife migration to nature's impacts on human well-being. He has served as Conservation International's CEO since 2016.

Sanjayan joined Conservation International in 2014, overseeing its successful $1.1 billion capital campaign and its critically acclaimed brand campaign, "Nature Is Speaking," and its push into virtual-reality filmmaking.

Harley Finkelstein is an entrepreneur, lawyer, and the Chief Operating Officer of Shopify.

He founded his first company at age 17 while a student at McGill. Harley completed his law degree and MBA at the University of Ottawa, where he co-founded the JD/MBA Student Society and the Canadian MBA Oath.

Harley is an Advisor to Felicis Ventures and one of the "Dragons" on CBC's Next Gen Den.

He recently received the Canadian Ang...