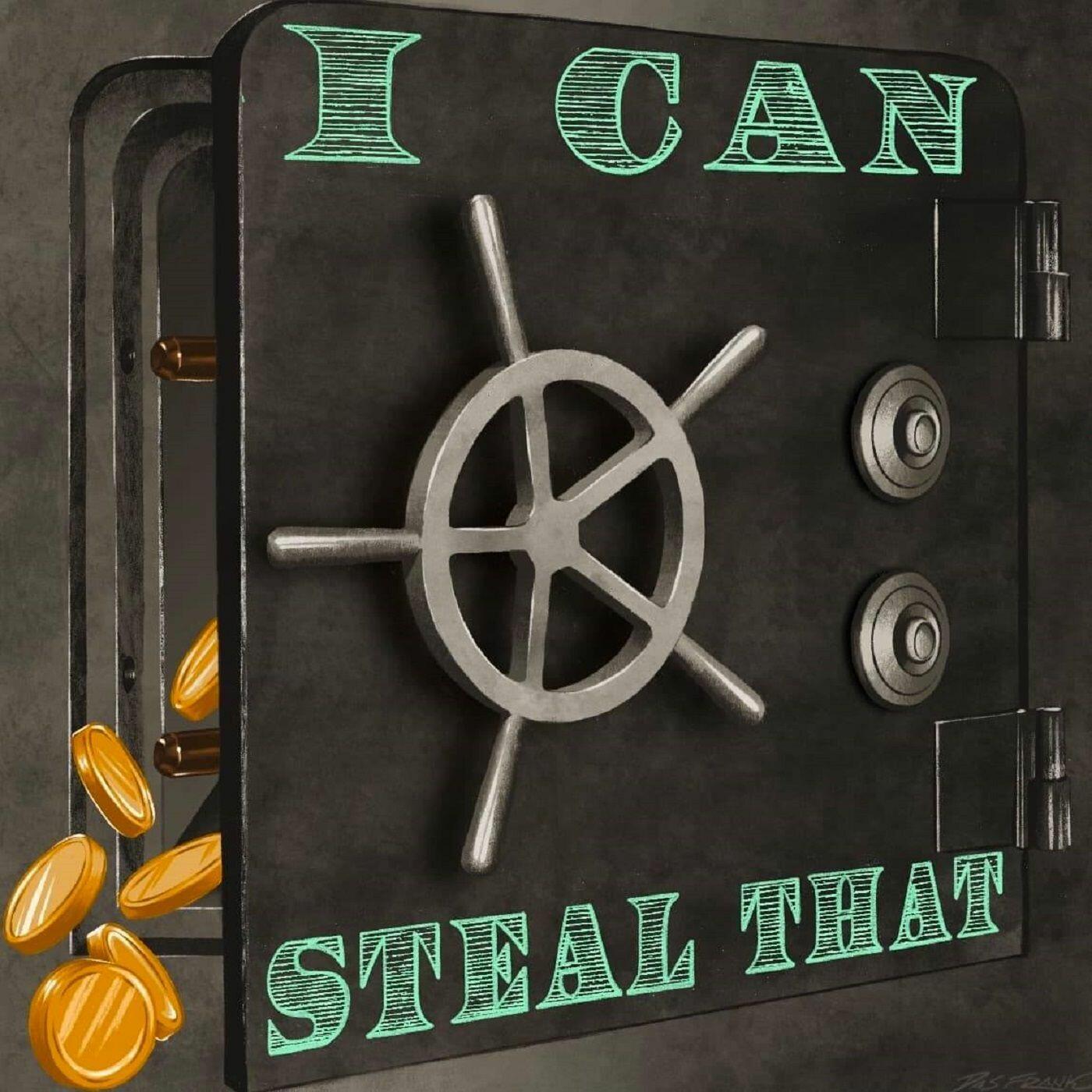 I Can Steal That!

Like heists, scams, and cons? I Can Steal That! is the true crime podcast that's never too heavy. Each episode tells the story of some of history's most outrageous heists, cons, and scams and the fascinating people behind them. Host Pete Stegemeyer breaks down the details of each case for a comedic guest and will change the way you look at banks, museums, and grifts.... Show More

On this episode, Pete talks about the 1911 heist of the Mona Lisa, which propelled the painting from relative obscurity to being the world's most famous work of art for over a century.

Pete also talks a bit about the upcoming schedule and provides a few book updates.

On this Valentine's week episode we talk about one of the grossest kind of con artists around - Love Scammers. Like the name implies, these scams consist of getting victims to fall in love and then manipulating them out of money or something else valuable.  These guys are the lowest of the low, and we dive deep into an especially scummy love scammer who is still out there, and what you can do to protect yourself!

In August 2005 a team of thieves pulled off a heist that was several months in the making and walked away with over 6000 pounds of cash - all in 50 Real bills. The total take was worth over 70mm USD and required them to dig a hole from a rented office space to beneath Brazil's Central Bank's vault.

Pete is joined this week by Carlos Garcia - a NYC comic and co-host of the great Frat Chat podcast.

In January of 1976 a team of thieves descended upon a bank in the middle of a literal war zone to pull off the biggest bank heist in history. Armed with rifles, grenade launchers, and even mortar tubes, the thieves managed to empty the vault of the British Bank of the Middle East of at least $25,000,000 pounds (worth over $200,000,000 USD in today's money).

Pete is joined today by his good friend Rick Gideons of Fifty11 Media....

In 1963, a team of thieves pulled off one of the most audacious train heists in history, without firing a single shot.  The heist, worth over $40,000,000 in today's money was the perfect combination of planning, muscle, and crazy and like any good heist there's some fun nicknames.

Pete is joined this week by the hilarious Kent Carney. Kent is the star of the fantastic web series, "Bagged and Bored" and such an iconic...

When you hear about a nation's crown jewels being stolen, it sounds like the work of  a master thief with unlimited resources and high tech tools. Sometimes, though, it's just a couple of dumb friends with stolen bikes that bite off more than they can chew and those stories can be just as entertaining.

Pete is joined this week by the wonderful Dara Jemmott.

Why steal money when you can steal a money printing press? That's exactly what a team of Icelandic thieves did,  and we break down exactly how they did it and get into what bitcoin is, how it works,  and why Iceland is a great place to do crime.  (Please don't do crimes in Iceland.)

Pete is joined by Kristin Seltman, host of the great "Who Among Us" podcast.

The Nigerian Prince scam is probably the most iconic scam running today, and on this episode we're doing a deep dive into the history of the scam and how Emmanuel Nwude ran a variation of this scam to sell an imaginary airport for $330 Million dollars, making it the third largest financial fraud case in history.

Ivar Kreuger was a business man and financial whiz that became the Match King of Sweden AND an engineer that worked on the Flatiron building and Macys flagship in NYC, and he invented financial practices that are still in use today,  but what he is best known today for is  financing governments so they could rebuild after WWI and getting the title "The Savior of Europe" and committing such massive fraud that he nearly bankr...

On September 12, 1997 six friends pulled off the heist of a lifetime at the Dunbar armored car depot in Los Angeles, California.  After subduing the security guards and moving throughout the building without being detected by the facility's cameras, they managed to steal 18.9 million dollars in just under 40 minutes without firing a single shot, making this the largest cash heist in US history.

Pete is joined this episode by Br...

In January 2006, a team of thieves walked into the Banco Rio building in Buenos Aires and pulled off what is considered by many to be the heist of the century. This heist has inspired several movies, the Netflix Series "Money Heist," and countless other real world heists.

Pete is joined this episode by Kevin Gootee, host of the fantastic movie podcast "Gutting the Sacred Cow." Check it out at www.guttingthesacredcow....

Like heists, scams, and cons? I Can Steal That! is the true crime podcast that's never too heavy. Each episode tells the story of some of history's most outrageous heists, cons, and scams and the fascinating people behind them. Host Pete Stegemeyer uses his cyber security and military experience to break down the details of each case for a comedic guest and will change the way you look at banks, museums, and grifts. Subscri...

Natwarlal was the most successful con man in India's history and is still revered by many as something of a folk hero. Over a career of several decades, he mastered forgery, impersonation, and social engineering to pull off scams that are too crazy to believe including selling the Taj Mahal to foreign tourists on three separate occasions.  To this day his name is used as a verb for anybody that's trying to pull off a scam.

Minjian Yang led one of the world's most successful car theft rings - stealing thousands of cars from NYC and then smuggling them into China where wealthy buyers waited.   Yang and his crew made tens of millions of dollars using military like precision and discipline, and eventually got so good that they'd target whole dealerships instead of individual cars.

Pete is joined this week by NYC comic and host of The Maxcast, Max...

Share
Mark as Played
EP 33 - The Original Italian Job
November 24, 2020 • 53 min
In the early 16th Century two of history's greatest minds conspired to pull off the most ambitious heist in the history of the world. Niccolo Machiavelli and Leonardo Da Vinci weren't just going to steal money though - they were going to steal a whole river. Seriously.Pete is joined this week by Steven Cohen.
Share
Mark as Played
EP 32 - The King Of Thieves
November 16, 2020 • 56 min
King Farouk of Egypt was one of the last members of a monarchy dating back over ten thousand years, but he wasn't just the king of Egypt, he was also the king of thieves. Farouk stole paintings, jewelry, even a 94 carat diamond and got so good at pick pocketing that he stole Winston Churchill's pocket watch during a dinner. Pete talks about one of history's most interesting people with Linette Palladino, a NYC comic and...
Share
Mark as Played
EP 31 - Crazy Eddie
November 9, 2020 • 42 min
Crazy Eddie's was an electronics store known for their absolutely insane commercials and INSAAAAANE prices but what they didn't advertise was that almost every single aspect of their organization was a fraud. Money Laundering, embezzlement, insurance and inventory fraud - Crazy Eddie's did it all and THEN they went public to steal money from investors, too. Pete is joined this week by the fantastic Gianmarco Soresi, wh...
Share
Mark as Played
EP 30 - The Swedish Helicopter Heist
November 2, 2020 • 54 min
In September of 2009, a team of thieves pulled off a heist so insane it sounds like something out of Grand Theft Auto. Using a stolen helicopter and a bunch of bombs, the team was able to steal so much cash that the city of Stockholm almost ran out of bills in the days following the heist, and the story just gets crazier.Pete is joined by NYC comic Bo Ballew.
Share
Mark as Played
EP 29 - The Teardrop
October 24, 2020 • 50 min
In 2001 a gang of thieves broke into a garage on Milwaukee's lower east side and stole what many call the most beautiful car ever made - a 1938 Talbot Lago T-150C SS. This is the story of the car theft, bungling police, and international scandal. Pete is joined by comedian and Tik Tok celebrity Patrick Loller.
Share
Mark as Played
EP 28 - Babyfaced Arms Dealers
October 18, 2020 • 70 min
During the height of the Afghan and Iraq wars, the US began outsourcing as much of the war as possible to the lowest bidder. Anybody with an internet connection and an LLC could submit bids to provide anything from bullets to bazookas. When two twenty somethings won a $300,000,000 bid to provide bullets and grenades to the US government, things quickly spiraled out of control. This is the story of AEY, and it's full of interna...
Share
Mark as Played

Chat About I Can Steal That!