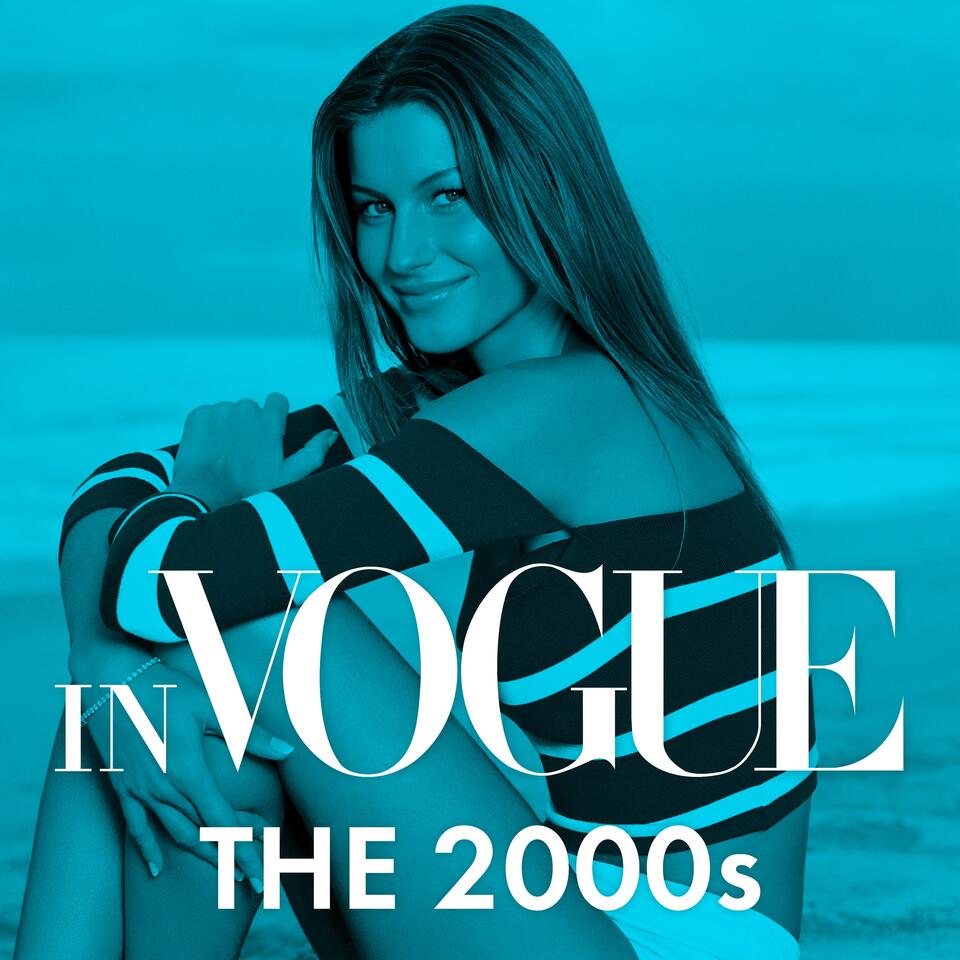 In season 2 of In Vogue: The 2000s, we explore how fashion fused with every aspect of pop culture to become a global entertainment engine ubiquitous in culture--impinging on the global consciousness like never before. From Nicholas Ghesquière awakening the sleeping fashion house of Balenciaga, to Vogue putting the couture into Juicy Couture, and discussing Carrie Bradshaw’s influence on trendy 2000s fashion with Sarah Jessica Parker, we cover the iconic looks that defined the decade. Hear how 9/11 led to the creation of the CFDA Vogue Fashion Fund and ushered in the next generation of designers. We examine the colliding worlds of Vogue and Hollywood, and learn how the Met Gala became the Superbowl of fashion. We go behind the scenes of the most iconic fashion shoot of all time, where Annie Leibovitz and Grace Coddington transformed the designers of the decade into the characters of Alice in Wonderland, and sit down with the Brazilian Bombshell herself, Gisele Bündchen, who revolutionized modeling and the fashion industry, while on a meteoric rise to international celebrity status. **Credit: Photographer Steven Meisel for Gisele and Chanel

April 19, 2022 • 12 min
Unimaginable secrets. Unyielding power. Devastating rifts and shocking allegiances. With surprising new interviews as well as historic sound, Vanity Fair’s DYNASTY examines the ties that bind the most influential families in the world today, taking you inside their lives for a glimpse at the inner workings of privilege. The DYNASTY debut season goes deep on the modern Windsors with Vanity Fair’s royal correspondent Katie Nicholl an...
Share
Mark as Played

November 2, 2021 • 34 min
The dawn of the 21st century witnessed the proliferation of media, and a decided shift online. With access like never before, the fashion world was opened to new readers, fans, and enthusiasts through the eyes, and fingertips, of self-appointed chroniclers and critics who came to be known as “the bloggers.” In turn, these bloggers paved the way for the influencers of today. Join us to hear how the era of blogging brought street st...
Share
Mark as Played

Episode 8: Sex and The City: Bringing Fashion to the Masses

October 26, 2021 • 40 min
In celebration of its HBO revival, Sarah Jessica Parker, Cynthia Nixon, and stylist Patricia Field reflect on how Sex and the City created one of the most eclectic, glamorous, aspirational, and enchanting ensembles in television history. The series introduced the world to four intelligent, single, empowered women, who didn’t hold back from enjoying the finer things in life, giving rise to Sex and the City’s fifth leading lady: fash...
Share
Mark as Played

October 19, 2021 • 40 min
Before the 2000s, Hollywood and fashion were largely considered separate entities, but the December 2000 Vogue cover featuring Nicole Kidman and her musical debut in Baz Luhrmann’s Moulin Rouge! was revolutionary in bridging the gap between the two worlds. Meanwhile, with celebrities under the watchful eye of the paparazzi like never before, stars like Sienna Miller became fashion icons. As a result, celebrity stylists were in hig...
Share
Mark as Played

Episode 6: Annie Leibovitz and Grace Coddington: Down the Rabbit Hole of The Greatest Fashion Shoot of All Time

October 12, 2021 • 44 min
Take a behind-the-scenes tour of Vogue’s iconic 2003 photoshoot, Alice in Wonderland. Brought to life by photographer Annie Leibovitz and Vogue editor Grace Coddington, the shoot starred Natalia Vodianova and thirteen of the decade’s most influential designers. From conception to completion, listen in on how Annie and Grace pulled off such an imaginative shoot, on the tightest of schedules, all while balancing fashion’s biggest cre...
Share
Mark as Played

Episode 5: Stitched Back Together: The Birth of the CFDA/Vogue Fashion Fund

October 5, 2021 • 43 min
The attacks on 9/11 disrupted the entire American cultural and economic landscape. With the fashion industry in a period of instability, the next wave of fashion talent would need help to stay afloat. Vogue recognized the need to support emerging designers and in partnership with the CFDA, created the Fashion Fund. The fund paved the way for influential designers like Rodarte, Jason Wu, and later Christopher John Rogers. Join us as...
Share
Mark as Played

Episode 4: From Pacoima to Paris: A Very Juicy Couture Story

September 21, 2021 • 35 min
Few designers in the 2000s pushed boundaries, stirred conversation, and made statements like Nicolas Ghesquière. At twenty-five years old, Nicolas took over the dormant fashion house of Balenciaga. As a young, unproven designer, no one foresaw the explosion of ingenuity that would follow. Ghesquière incorporated the influential creations of Balenciaga’s storied past, while drawing inspiration from science fiction, to produce revolu...
Share
Mark as Played

September 14, 2021 • 43 min
Throughout the 2000s, the Metropolitan Museum Costume Institute Benefit—better known as the Met Gala— rose in exuberance and notoriety, becoming the Superbowl of fashion. No longer an exclusive evening for those “in the business,” the gala began welcoming prominent artists, entertainers, and politicians alike. The broad spectrum of prominent cultural figures reflected within the pages of Vogue, toed the gala’s red carpet, resulting...
Share
Mark as Played

Episode 1: Gisele Model of the Decade

September 7, 2021 • 34 min
No model defined the 2000s like Brazilian bombshell Gisele Bündchen, whose multifaceted charm and charisma catapulted the fashion industry beyond the waif supermodels of the 1990s and into the curvaceous runway of the new millennium.  The decade was a smash hit for Gisele. Her infectious personality and era defining look led to her dominance throughout the entire modeling landscape and global runway, while contributing to countless...
Share
Mark as Played

Introducing In Vogue: The 2000s

August 31, 2021 • 1 min
In season 2 of In Vogue: The 2000s, we explore how fashion fused with every aspect of pop culture to become a global entertainment engine ubiquitous in culture--impinging on the global consciousness like never before. From Nicholas Ghesquière awakening the sleeping fashion house of Balenciaga, to Vogue putting the couture into Juicy Couture, and discussing Carrie Bradshaw’s influence on trendy 2000s fashion with Sarah Jessica Parke...
Share
Mark as Played

December 15, 2020 • 27 min
As we close the series, Vogue editors and source interviews throughout the season reflect on what they consider to be the ending of the 90’s. Some purists argue that the decade ends on Dec 31, 1999, others have pivotal moments that flag the end of the zeitgeist before transitioning to the 00’s. To catch up on the season and to access additional Vogue content, make sure to visit vogue.com/podcast. Don’t miss out on new episodes of I...
Share
Mark as Played

The 1990s Episode 12: Rappers on the Runway: How Hip-Hop Changed Fashion

December 4, 2020 • 43 min
Music and fashion have always had a symbiotic relationship, but not until the emergence of hip hop did we see the direct influence of music and music-makers on the fashion industry—and vice versa. This episode is a culmination of the cultural prominence of hip hop, from Dapper Dan’s Harlem Boutique to Tupac walking in a Versace show in Milan. We examine how Hip Hop shook up the fashion world in the 90's and eventually went on t...
Share
Mark as Played

The 1990s Episode 11: John Galliano in Conversation with Hamish Bowles

November 27, 2020 • 32 min
This week, in honor of John Galliano's birthday, we're releasing a special episode featuring an extended interview with John Galliano on his career in fashion. For more on this week’s episode and to access additional Vogue content, make sure to visit vogue.com/podcast. Don’t miss out on new episodes of In Vogue: The 1990s on: Apple Podcasts: listen.vogue.com/iv-apple-podcasts Spotify: listen.vogue.com/iv-spotify Google: l...
Share
Mark as Played

November 24, 2020 • 23 min
After years working alongside Karl Lagerfeld, Virginie Viard is quietly and confidently reimagining Chanel for the house’s next chapter. Listen to the exclusive spoken audio article from Vogue here. This article was read by Hamish Bowles. Read along to the full story here, and for more of Hamish and Vogue, make sure to subscribe to In Vogue: The 1990s on: Apple Podcasts: listen.vogue.com/iv-apple-podcasts Spotify: listen.vogue.com...
Share
Mark as Played

November 20, 2020 • 39 min
By the mid 90’s, fashion had ceased to be an insular, self-sustaining industry. The fashion ecosystem expanded rapidly to include celebrities as aspirational symbols of fashion and status in popular culture. We chronicle the era when pop culture became the vehicle for a mass education in high fashion. Voices featured, in order of appearance: Kristin Davis, Fran Drescher and Brenda Cooper for the Nanny, Donatella Versace, Vera Wang...
Share
Mark as Played

November 14, 2020 • 27 min
This weekend, we're delighted to be bringing you an exclusive spoken audio version of Vogue's December cover story. In Vogue: The 1990s host Hamish Bowles interviewed Harry Styles in a wide-ranging conversation spanning Styles' Tokyo travel plans, making music, and his refusal to be defined by boundaries and labels in fashion. You won't want to miss hearing this intimate interview with Harry Styles, the first-ever s...
Share
Mark as Played

November 13, 2020 • 35 min
By the mid 90’s, New York City had married the European couturier model with the commercial power of Seventh Avenue, and had begun to overshadow Paris and Milan as the most important fashion capital in the world. Around the same time, a downtown school of designers and cultural figures began to react against the corporatized, uptown school, establishing a second, and equally as powerful vein of American fashion that exists even tod...
Share
Mark as Played

November 6, 2020 • 37 min
At the beginning of the 1990s, London’s fashion scene was sleepy and small. But not for long: Following the groundbreaking success of young British designer John Galliano at Givenchy in the 1980s, other young graduates of the London art school Central Saint Martins began to push the fashion world’s boundaries. Hussein Chalayan, Alexander McQueen, and Stella McCartney garnered attention with their provocative presentations, complex ...
Share
Mark as Played

October 30, 2020 • 39 min
From major fashion fundraisers to Madonna’s Vogue video, the 90s was a decade of queer visibility unlike ever before. But the road to acceptance was a rocky one. When the glamour of the 70s and the first gay pride parades glorified sexual liberation, fashion reflected the sensuality on the runways and magazines. But when the AIDS crisis of the 80s started killing thousands of gay and trans people, queer expression. was shadowed by ...
Share
Mark as Played