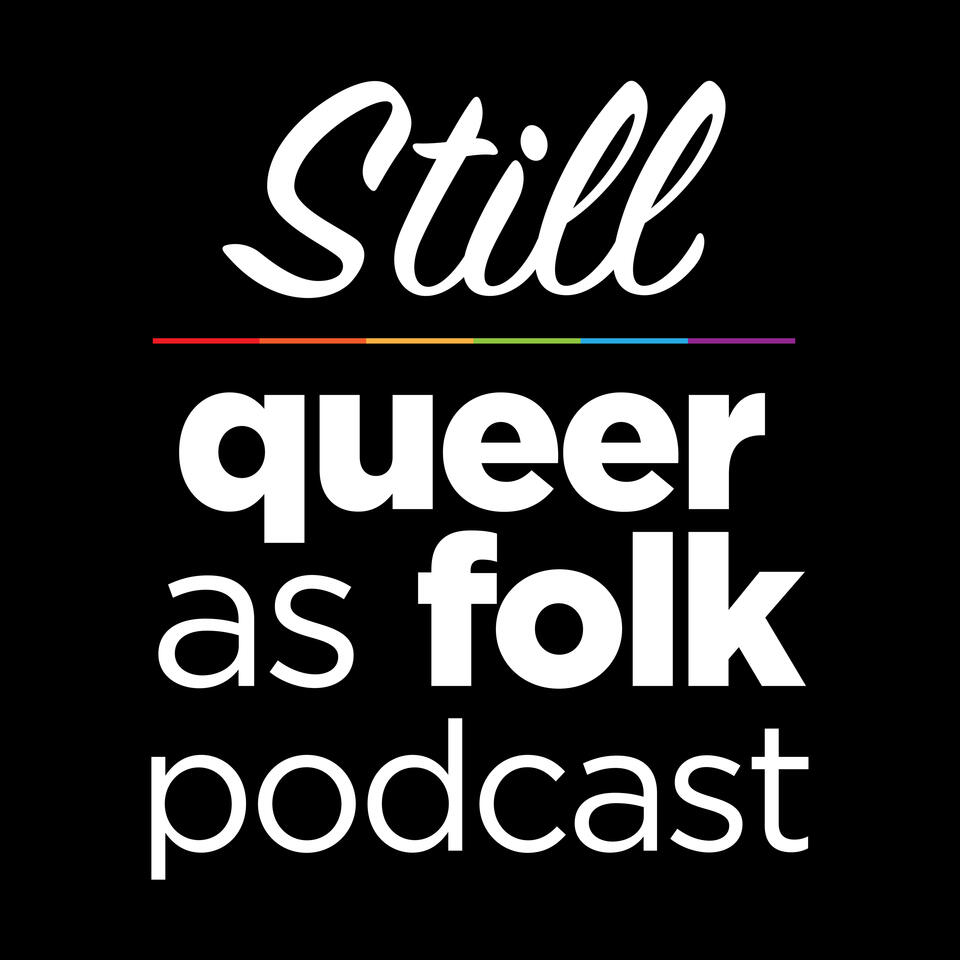 A critical review and analysis of Showtime's Queer as Folk presented by two bitchy and sometimes jaded gay guys. Listen in as we take apart the stories, screenplays, characters and aspects of the show that haven't aged well. Nothing is off limits, be it music, costumes, sets, or acting. We're huge fans of the show, but you would probably never know it after listening to Still Queer as Folk. All five seasons are covered, recorded between 2018-2021. Check out the Still Queer as Folk UK podcast for our take on the original.

We've reached the end! Every single episode of the original UK Queer as Folk and the US version of the show are in the bag.

Join us for one last circuit around the gaybourhood as we compare and contrast the two shows to find out which one is the best.

Stuart is sick of Manchester and decides to move to London, causing Vince to consider his own life, and what he really wants out of his relationship with Stuart.

Nathan continues to be tormented at school, but ends up owning the teacher. Stuart blows up Alexander’s mother’s car. An...

Stuart demolishes a Jeep store after the salesman makes homophobic remarks to him. Lance and Romey’s fake marriage falls apart after Nathan sent incriminating evidence to the Home Office causing Lance to attack a policeman and the Home Office man.

Stuart is rejected by an ex-trick in ...

Vince turns 30 and Stuart throws a birthday party for him, apparently without much help from Cameron, who gives Vince a car for his birthday. Not to be outdone, Stuart gives Vince a much more adored Dr Who K-9 robot.

Stuart realizes that he’s holding Vince back from being happy with ...

The relationship between Vince and Cameron starts to show cracks as Stuart’s hold on Vince becomes more and more obvious to Cameron. Stuart is forced to confront his own parents about their pending divorce while his own role as a parent is brought into question when Romey announces th...

Hazel begins to think that Nathan is taking advantage of her when he stays out all night. Vince lands himself a date with sexy Australian accountant Cameron Roberts, and winds up short one cell phone, but up one hot tongue kiss. Stuart gets a visit from his sister Marie who asks him t...

Traveling north for Phil’s funeral, Vince delivers an amusing reading at the service and meets a delightful accountant named Cameron. Back in Manchester, Nathan hooks up with Christian Hobbs and then Stuart much to Vince's consternation.

Alexander arrives in town with a Japanese guy who, unbeknownst to Alexander, is a hooker and would lik...

Nathan is still glowing from his all night fuckfest with Stuart Alan Jones and sets off for Canal Street in search of him. Things are going well enough for the teenager until he stalks Stuart to his flat only to find him about to test out a chap named Goodfuck (or Collin, as we find...

On a night out clubbing, Stuart picks up 15-year-old Nathan on the street, and Vince is stalked home by a muscle daddy that turns out to be…just a daddy. Stuart and Nathan are naked in bed when they get the call that Stuart’s lesbian friend Lisa has given birth to their child. Stuart ...

Michael speaks at an anti-Prop-14 press conference, but deviates away from his prepared speech when Debbie and bunch of people we’ve never seen before show up. Ted’s new BF Tad get a bit obsessive and freaks out everyone in sight.

Brian and Justin call off their wedding, and Justin leaves for New York. Melanie and Lindsay also hit the road and pack up their Subaru for the drive to their new home in Toronto.

Brian and Justin keep barreling towards marriage even as Justin’s career as a painter awaits him in New York. Melanie and Lindsay ask for Brian and Michael’s blessing to take their children out of the country, with Michael agreeing, but Brian disagreeing and then finally agreeing after some pressure from Lindsay.

Drew and Emmett break up after Emmett realizes that Drew needs to fuck around for a while before he will be capable of h...

Everyone comes to terms with the bombing and what it means to their lives, in very different ways. Brian makes an improbable swing to marriage with Justin, Ben attacks proposition 14 supports, and Drew Boyd speaks at the vigil.

Melanie and Lindsay consider a new future for themselves and their children that doesn’t include Pittsburgh or any of their long term friends and fathers and Ted continues to blame himself for Michael’s inju...

Today we’re talking about episode 10 of Season 5, and it’s called “I Love You."

It first aired in the US on July 17th, 2005. It was written by Del Shores, his final episode. He wrote eight episodes, and produced 41 episodes.

“I Love You” was directed by Kelly Makin, his tenth of eleven episodes. He also directs the series finale.

Here’s the synopsis of “I Love You.”  The lives of every character are rocked by anti-proposition ...

Brian and Michael continue to quarrel over Michael’s new life, ending in Michael calling it quits and moving on from Brian. In a quasi related runner, Ben and Michael come to terms with what it means to publicly fight against Proposition 14. And we meet Jennifer Taylor’s new boyfriend, a hunky science teacher named Tuck who whisks her away on a motorcycle.

Tiring of fucking everything that moves, Ted’s search for a husband leads h...

Brian’s midlife crisis reaches a head when he wins his bet with Brandon, but opts not to collect his reward. Drew Boyd is outed in a tabloid and turns to Emmett for advice. When the paparazzi track him down, he hides out in Emmett’s bedroom.

Ben continues to stress over Hunter’s departure and clashes with Michael as he begins giving away Hunter’s possessions. Lindsay and Melanie begin their home-separation with mixed results, and ...

Justin dumps Brian and moves in with Ben and Michael, much to the consternation of Brian who pays them a late night drunken visit. After banning Random Hot Guy Brandon from Babylon, Brian launches a contest with him to top the ten hottest guys in Pittsburgh.

Ben is still depressed over Hunter running away from home, and it took Homer and Achilles to snap him out of it and join Michael in protest of Proposition 14, a seemingly impo...

Today we’re talking about episode 6 of Season 5, and it’s called “Bored out of Ya Fucking Mind”

It first aired in the US on June 19th, 2005. I was written by Del Shores, his seventh of eight teleplays. He also produced 41 episodes, or half of the series.

“Bored out of Ya Fucking Mind” was directed by Alex Chapple. He directed 8 episodes and this is his last one. Alex Chapple is probably the most accomplished director post-Queer a...

Today we’re talking about episode 5 of Season 5, and it’s called “Excluding and Abstemiousness”

It first aired in the US on Jun 12th, 2005. It was written by Shawn Postoff, his sixth of seven episodes, and he also served as story editor for 14 episodes.

“Excluding and Abstemiousness” was directed by Chris Grismer, who only directed three episodes of Queer as Folk. He went on to direct episodes of Kyle XY, Orphan Black and the the ...