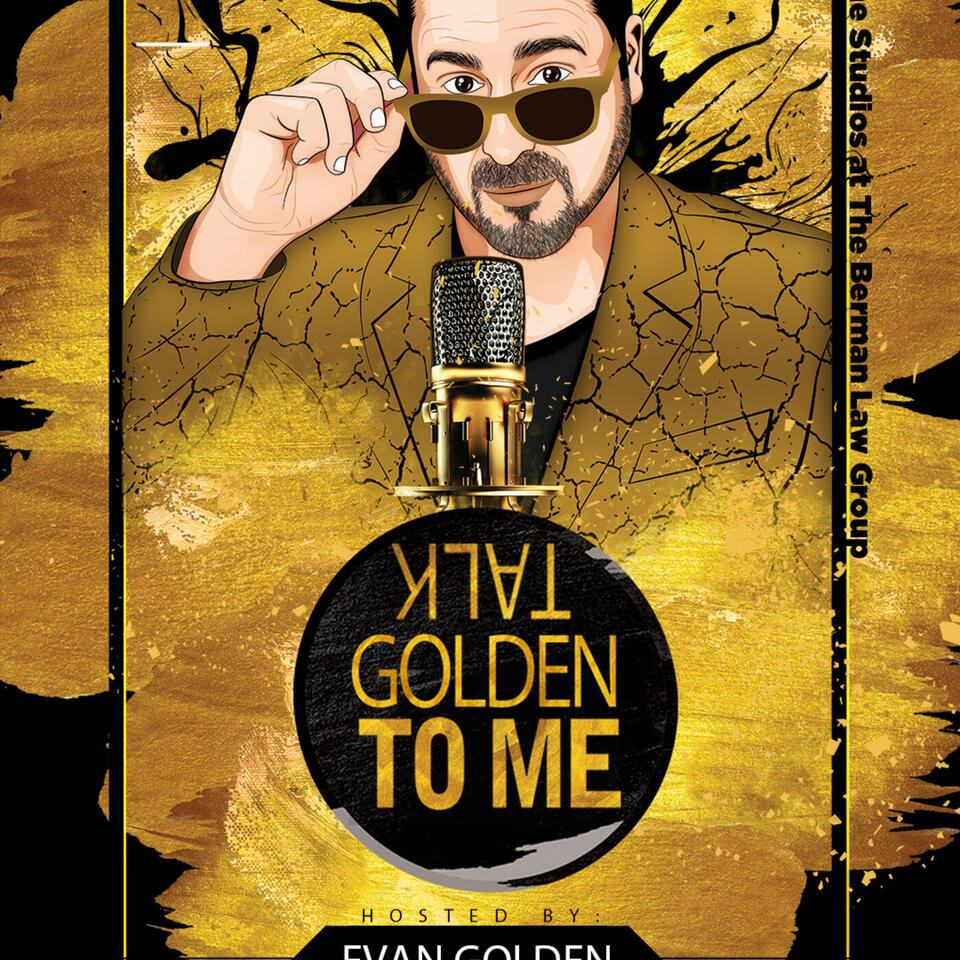 Talk Golden to Me Hosted by Evan Golden

Press Play! Evan Golden, TV personality, actor and producer based in South Florida has officially released his video podcast series broadcasted from the offices of The Berman Law Group in Boca Raton, Florida. The podcast, "Talk Golden to Me" discusses what’s trending in entertainment, pop culture, businesses, and exclusive personal interviews Guests have included: Miss Florida USA Brittany Oldehoff, NFL Legend Fred Taylor, Instagram Super Star Supreme Patty, Senator Joseph Abruzzo, Recording Artist Rio Santana, and many more have already been scheduled in for future recordings. "Talk Golden to Me" is now available for free on iTunes and Spotify. In addition, you can also view the official video podcasts on Youtube."So many people and business have launched podcasts as of late, we wanted to take an interactive approach utilizing new technology. We have teamed up with Sling Media L.L.C, and we will be recording and live streaming the shows through SlingStudio, the industry's first portable, wireless multi-camera broadcasting platform with 4K post-production support," said Marjorie Guaracho a Producer for the show.“I have been using the term "Don't Google it, Golden it!” for many years now and it's a motto I will be bringing to the show. It does not mean I have the solutions for everything being discussed but it does mean I have an answer, not necessarily the correct one but it's my take and opinions," said Host Evan Golden.ABOUT TALK GOLDEN TO ME Talk Golden to Me launched May 23, 2019 and releases new episodes weekly. This podcast is dedicated to provide listeners with “Golden” content by delving into the trending world of influencers, entrepreneurs, professional athletes and more. Each guest is brought in to share their story, personal brand and discuss any upcoming projects they have emerging. There will be fun, games and contest giveaways coming soon call "Golden Giveaways" that will attract various listeners for a chance to win top of line prizes from iPads, sunglasses to vacations.ABOUT EVAN GOLDEN Evan Golden is most recognized for his work with MTV, Universal Studios and his break out role on Ivana Trump's reality TV show, "Ivana Young Man." Evan Golden also is a host for the TV Show Eye on South Florida and has been honored as South Florida's Young Leader in Philanthropy by Simply The Best Magazine, Men With Caring Hearts by the Florence Fuller Child Development Centers, Real Men Wear Pink Candidate by the American Cancer Society and winner of the 2018 Apogee Award by South Florida Business & Wealth Magazine.For more information on how to be a guest on the show, contact series production coordinator via email MGuaracho(at)thebermanlawgroup.com or follow Host Evan Golden on Instagram @GoldenTV to provide feedback and ideas for the podcast.ABOUT THE BERMAN LAW GROUP The Law Firm, based in Boca Raton, FL is a full service law firm established in 2008. Evan Golden joined the law firm in 2014 to oversee the Marketing, Sports and Entertainment Division. He also sits on the board for the Berman Family Foundation. The studio is based in the firms mains offices of East Boca Raton.The views, information or opinions expressed during the "Talk Golden To Me" podcast series are solely those of the individuals involved and do not necessarily represent those of The Berman Law Group and its employees. The Berman Law Group is not responsible and does not verify for accuracy any of the information contained in the podcast series.

Tommy Davidson started his career as a stand-up comedian in Washington DC, earning an ardent following with sheer hard work in various comedy clubs. As one of the cutting-edge, young stand-ups, he was spotted by major concert promoters, who booked him as the opening act for A-list touring acts, including Patti LaBelle, Kenny G and Luther Vandross. It wasn't long before he came to Hollywood and was performing stand-up at a numbe...

Holly Sonders born on March 03, 1987, in Marysville, Ohio, in the United States of America. Her father, Dan, was an optometrist and her mother was a retired golf champion, no wonder Holly took a liking to the sport. Growing up, her interest in golf was apparent, and she was soon making a name for herself with her exemplary skills in golf. This performance, in turn, managed to earn her a high school scholarship at Marysville High Sc...

My greatest accomplishment(s) are my 4 children...  Yes, they run me ragged most of the time, but they are also what keep me going and drive me to do better, be better & work harder.

I've been in the modeling industry, professionally, for 19+ years and I am currently signed a...

In her personal healing journey from medically dead to healing a terminal incurable disease she discovered somatic sexology & began her studies as a sexologist to heal herself & help commUNITY.

Sharmila is a hypnotherapist, NLP practitioner, sexology consultant to se...

Multi-award-winning social media expert & influencer. Co-Founder of BusinessOwnerSociety.com and CEO of Brand Branding PR LLC. getty The world as we know it seems to have changed overnight. None of us have experienced a global pandemic on this scale, with so many businesses forced to shut down to help stop Covid-19 from spreading. But from great adversity comes great opportunity. It’s time to adapt to survive, and social media ...

On April 18th 2015, two former Division 1 college softball players were involved in a collision on the base paths during an A10 conference matchup. The collision between the two players resulted in a life changing injury for Bella Picard and a life changing perspective for Allie Br...

The Pyhton Cowboy is accustomed to wading into the blackness of the Everglades at night searching for invasive Burmese pythons as a paid bounty hunter for the South Florida Water Management District.

Just shy of six feet tall with crystal blue eyes and flaxen blonde hair, this ambitious glamazon from a quiet town in the north of Sweden has dreams of acting after a few more years of modeling. Victoria has graced the pages of Playboy magazine as Miss December 1996, and has just been named the 1997 Playboy's Playmate of the Year. She has also skied competitively in the giant slalom as a lithe Swedish athlete. In 1993, Victoria...

Grace Field was born in the little town of Austin Texas. From the get-go, everyone knew she was an artist; before she could ever speak she was either singing, plunking notes on the piano or creating artwork!

Her love for theatre and performing grew as she started school and began to perform in school plays and musicals.  Her musical debut was in the 4th grade, where she played the title role of Oliver in Oliver!

Neon Hitch (born May 25, 1986 in Nottingham, United Kingdom) is an English singer, currently living in London.Hitch was raised in a romani family of circus performers. Prior to leaving at the age of 15, she traveled Europe performing as a fire dancer and a trapeze artist.

Hitch was previously the flatmate of Amy Winehouse.Hitch has performed alongside 50 Cent and The Streets. Along with Ke$ha, Sean Foreman, and Benny Blanco she wrot...

Yorvis Torrealba talks baseball, being kidnapped and the Parkland Shooting

Yorvis Torrealba, years removed from nightmare kidnapping, gets chance to follow in dad’s footsteps with the Colorado Rockies. He graduated from Stoneman Douglas and we talk about the Parkland Shooting.

João grew up in Zimbabwe in the midst of political strife and corruption, where surviving became a daily objective. Highly motivated to leave that life behind, João got a job doing day work for a boat captain, which began the rapid career trajectory that landed him as this season’s bosun of the Sirocco. While his professional path has been gold star all the way, his personal path has not. This season will prove whether he has learn...

Brandon Gomes from MTV Siesta Key talks about the upcoming season, his music career. - Talk Golden to Me Hosted by Evan Golden

The MTV network is popular for its reality show, and among them, Siesta Key ranks quite good. The group of eight adults gathering and staying in one place is a trend that was once followed by Floribama Shore. The main reason for its popularity is the love triangles and romantic life of all full of dramas. Brandon Gomes is one of the cast members.

Brandon Gomes’ hometown is in Sarasota, Florida. He holds American citizenship and is o...

Afida Turner is an international singer, songwriter, author, actress and TV Star & Host from France. Released her first single titled "Crazy About You" in 1998. She grew up being an orphanage after a terrible tragedy. She tried to change her life, forget all the negative things and pursue her dreams to be a singer. She became an underground artist in Paris, also a journalist and a host for MCM International: French BET....

from Bravo's Hit Reality TV Show Below Deck Mediterranean appears on The Talk Golden To Me Podcast hosted by Evan Golden.

We cant wait to see if Andy Cohen green lights the new searching for love reality tv show "Falling for Colin" Where Colin can finally find his true love.

Talk everything reality tv production and what its like being on the yacht with cameras in your face.

Thomas "Tom" Danielson (born March 13, 1978) is an American former professional road racing cyclist who most recently rode for UCI ProTeam Cannondale–Drapac, until a positive test for synthetic testosterone in August, 2015 and Cannondale's decision not to renew his contract. He previously competed professionally for Discovery Channel (2005–2007), Fassa Bortolo (2004), Saturn (2003) and Mercury (2002).

She is an ASICS Studio Trainer, has traveled worldwide to teach fitness, and has been featured in USA Tod...

Brittany Sinitch is the Founder and CEO of the Unbreakable Organization and a former educator. From a young age, Brittany was fascinated with the world of education. She always enjoyed raising funds for charities, playing the role of “teacher” to her stuffed animals, and working many summers with kids. Brittany knew that she wanted to inspire students to use their voices one day through English. When she attended Florida State Univ...