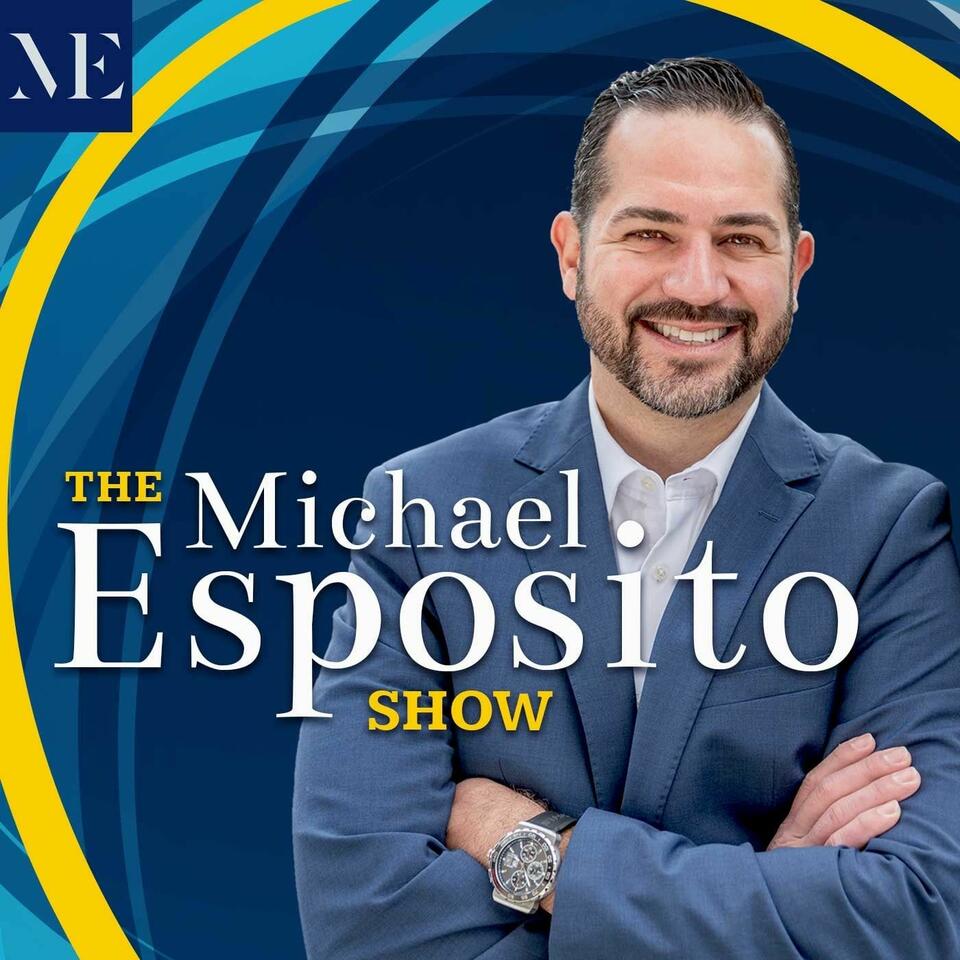 Hello, I’m Michael Esposito, founder of an executive consulting firm and an insurance company. I host a podcast dedicated to the development and growth of our entrepreneurial community, presented by iHeart Media. I invite business leaders to talk about their successes and challenges that have led them to where they are today. It’s not an interview, it’s a guided, interesting conversation. Each episode is meant to inform, educate and inspire you to be great! Tune in every two weeks for a new episode or should I say story..

July 22, 2022 • 66 min
For the Live Show, Michael has invited back some of our most inspiring guest speakers! This time, they will provide actionable tips to help you start working towards your goals TODAY!
Our panel of entrepreneurs discussed the hurdles of business ownership, how to get over them, and - even better - how to grow from them!
Thank you to the wonderful panel:
Heather Howley - Owner of Independent Helicopters
Geoffrey Green - Owner of Green Te...
Share
Mark as Played

How altruism and leadership build success with Anthony Catafalmo

He’s a veteran who served Army Airborne Brigade, like my father. He achieved a lot during his 8 years of service while also gaining a ton of leadership skills. Those achievements continued through his civilian career in insurance.

He started his insurance agency while working full-time as a firefighter. Anthony, like me, is a huge advocate for g...
Share
Mark as Played

How to make your business stand out with Ryan Scott

June 23, 2022 • 76 min
Building a business that stands apart from the rest takes creativity and imagination. It also takes a community.

Building trust with your competition is important for growth - especially when you’re not the only company of your kind in your area.

It can actually be an opportunity!

Business ownership doesn’t need to be all about beating your competitors.

Ryan Scott is the Owner of Pro Printers, a second-generation, family-owned, pri...
Share
Mark as Played

Quality of Life begins with Strategy with Sonia Narvaez

Your attitude impacts the outcome of your business.

A first-generation Latina, she developed her first virtual assistant company in 2017. She’s an Operations Strategist who prides herself on designing business systems that help companies achieve greater impact.

Working with altruistic entrepreneurs and business leaders seeking the path to creating an organization with a shared ...
Share
Mark as Played

How you do anything is how you do everything, one of today’s guests’ favorite quotes, which you’ll hear is true when you listen to this conversation.

Being a complete tech and branding nerd, Natasha created and curated her own comedy tours for nearly six years, partnering with brands and creating integrated brand relationships for tour partnerships. This led her to y...
Share
Mark as Played

“The harder you work, the luckier you get” with Tom Langan, Talex Media

A twice Emmy-nominated Producer and currently training for a triathlon, Tom Langan knows a thing or two about hard work.

But it’s not just the work - it’s the mental strength, the drive, and ambition, the willingness to step outside of his comfort zone to reach further than most ever do that’s ins...
Share
Mark as Played

Disrupt your industry by building for the long-term with Brian Amthor, Executive VP of Amthor International

When other businesses said no, Amthor International said yes - opening doors and providing products that others wouldn’t touch.

Amthor International began by building their own machinery as Amthor’s Blacksmith Shop in 1928 and now they’re the largest business in their industry.

Brian Amthor, Executive Vice President, talks with me about the special amount of pride that comes with bu...
Share
Mark as Played

How to get out of your own way and make a difference with Merritt Minnemeyer, Master of One Coaching

April 13, 2022 • 84 min
Merritt Minnemeyer is the Founder of Master of One Coaching, a leadership consulting business where she guides people to “be a master of their life and a leader in the world.” She understands the biggest blockers and coaches people to overcome so you can change the world for the better - on your own terms.

But there’s so much more to Merritt.

At a young age she knew that “someday I would be one of those people who managed to change t...
Share
Mark as Played

Meredith Rhoades learned from her parents how to seek happiness in work, without settling for less.

Starting as a journalist intern, she knew that she loved meeting different people and getting to know them but quickly realized that journalism wasn’t for her. Now, as a Business Advisor for Thryv, she gets to meet business owners, learns how she can help them and takes those people sk...
Share
Mark as Played

March 17, 2022 • 81 min
She has overcome challenges such as ADD and Dyslexia - all while taking on leadership roles in the corporate world - while being the only woman in the room.

Growing up in the 50s, when ADD and dyslexia weren’t well-known learning disorders and didn’t become known amongst educators until the late 60s, added t...
Share
Mark as Played

Leadership is in his blood - Terrance Weber, President & CEO, US Aerials & Equipment LLC

From growing up in Port Washington, NY, with a father who was an entrepreneur, to going to flight school after college, Terrence was always someone seeking success - leadership is in his blood!

Influenced by his father and grandmother, he decided to start his own business. Just because leadership is in his, doesn’t mean it was a simple path to success.

February 16, 2022 • 74 min
Being 25 and somewhat fearless, Heather started her business with only $25 in her pocket - now it’s a helicopter flight school and service.

Why would she pay someone else to fly her around if she could do it herself?

Her first helicopter ride was “love at first flight.” Knowing that only 6% of all aviators are women was not going to stop her from achieving her goal.

February 2, 2022 • 95 min
Ultra Marathon Runner, die-hard Yankee fan and the co-founder of The Intro Machine, Joe Templin is the master of introductions and relationships!

He talks about his martial arts background, struggles with ADD, and how to build resilience and strength through challenges.

He’s strong mentally and physically saying, “Resilience is one of the single greatest determinants of ultimate success, and falling in love with the struggle makes i...
Share
Mark as Played

He has always been one to learn from his mistakes. Lessons from being on the field have correlated to life lessons that he incorporates into his business.

Everyone knows that finding your care...
Share
Mark as Played

Soft skills and the heart behind them with Dr. Loralyn Mears Founder, STEERus

January 5, 2022 • 66 min
You know those skills that we all say should’ve been taught to us in grade school? Yes! Human Skills or Soft Skills like time management, critical thinking, resilience, and leadership are what I’m talking about.

We all know how bumpy the road is towards finding our personal success path, especially Dr. Mears.

As an egalitarian, she has always defended the underdogs and now s...
Share
Mark as Played

Matt and I met a couple years ago when he was a basketball coach at Bard College. Today, he’s started his own business coaching business - Matt Alfonso, LLC.

He grew up in a sports family and has always been involved in basketball, formerly a physical education coach in Virginia. His dad was also a teacher, principa...
Share
Mark as Played

We know you want to grow your business - who doesn’t?! Today’s guest, Jordan Depuy, Vice President of Lending at Sawyer Savings Bank, talks about his professional journey.

Life seems to come full circle. You just never know what’s possible if you want it and work for it hard enough!

Throughout Monica's career, she has always had an entrepreneurial heart. She founded June Lite the KIND Bulbs after living in Haiti while energy was scarce, often studying by a kerosene lamp.

This brought her a different perspective in life.

From life in NY to Haiti, she became passionate about lessening the carbon footprint and discovering solut...
Share
Mark as Played

November 9, 2021 • 52 min
When asked about his leadership style, Anthony Cioffi said, "Lead by example and deliver a quality product with consistency. Slow and steady wins the race."

Anthony took his passion for photography and started his aerial photography business, @aerialphotoplatform or AP3. Starting his own business, he had to learn how to become an efficient leader. One of the things he learned is to take things slowly and have patience be...
Share
Mark as Played

Robert Bowen, a US Navy Veteran, learned how to lead by example, make decisions, and be adaptable at a young age. He took this experience and brought it with him throughout his career - and uses it today as a CEO.

How do we support employees and encourage them to make decisions even if this means they will likely make mistakes too? Building trust, allowing people to admit their mistakes, and encouragin...
Share
Mark as Played