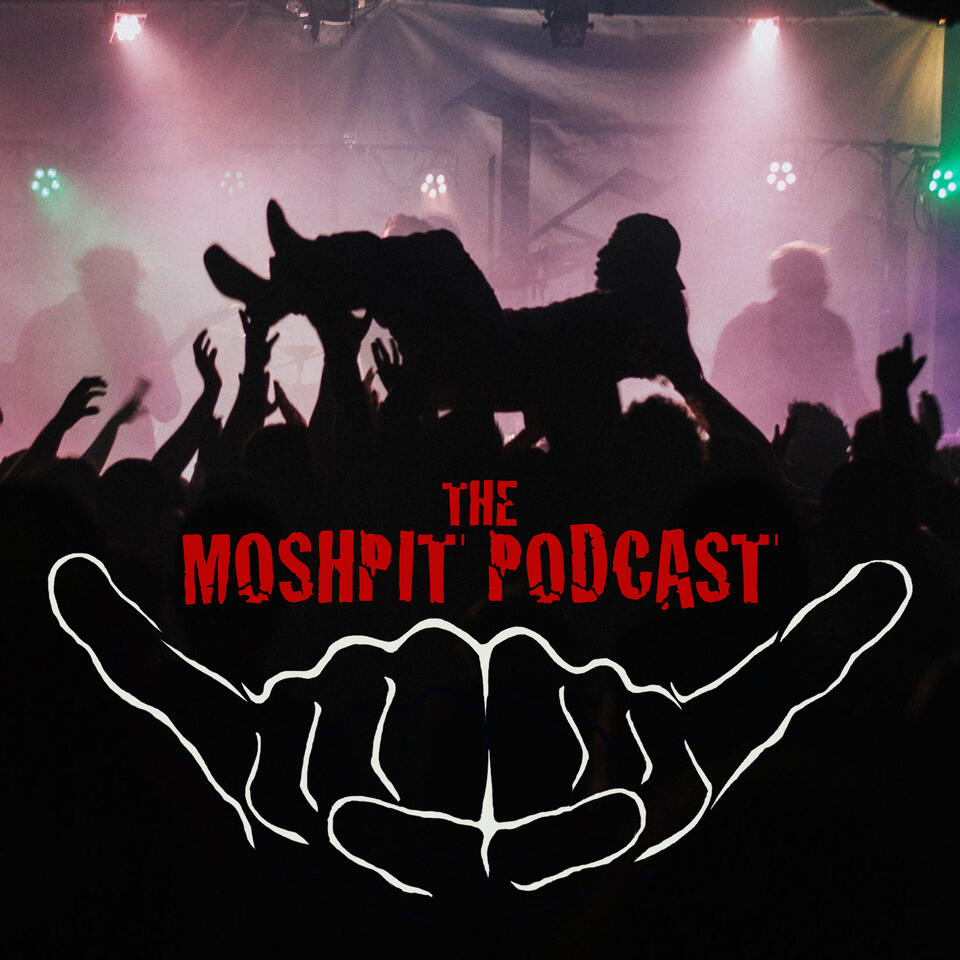 Throw on some checkered vans, pull on your band tees, and get ready to open the pit up. Join pop punk advocates, Michelle, Brianne, and Kelly, as they talk rock and all its subgenres. Whether it’s hyping up a new local pop punk band we found, throwing it back to the emo days of the 2000s, or venturing into some metalcore music that we don’t typically listen to, you’ll get your rock fix on The Moshpit. But mostly, we’ll talk about All Time Low. Now put your fists in the air and stick those pinkies out because this show is too much rock for one hand.

Episode 42: Don't Get The Spins, You're Going To Throw Up Or Something

So this episode had some revelations but because Michelle is actually kind of awful at her job of editing the episodes and releasing them on time, the revelations aren't so revelatory. But it's still cool that the ladies of The Moshpit Podcast had The Spins on to talk about things like getting woken up by a fireman with an ax on tour and their debut LP “Not If, But When” which is dropping everywhere this Saturday, June 26.

Episode 41: I Painted Myself A Rebel But I'm Not

Still playing catch up over here on The Moshpit but this gives you time to catch up if you haven't explored all of The Moshpitty goodness of episodes past. Speaking of the past (you like that smooth transition?), dig out your old baggy shorts and high socks because the ladies of The Moshpit are taking it back to 2001 skate park pop punk with another throwback track by track from The Moshpit Vault. What is this episode's thr...

Episode 40: Hey Oliver, there's a difference between a thought and a poem, you damn fool

So fuck it, we're moving to Mondays officially. And for this first dope ass first Monday special, the ladies of The Moshpit kick it with the one, the only, the Ollie. Yes, from Broadside. That's the one. You are correct. You know how it goes down on The Moshpit, the conversation delved into the nitty gritty to find out Oliver Baxxter's Hogwarts House, discovered all the almost one-word band names that Broadside could ha...

Michelle already made any shark joke in the actual episode so I'm just going to say it... WE WERE SHARKS INTERVIEW! Yeeeeee buddy! The ladies of The Moshpit had the pleasure of talking with Randy Frobel of We Were Sharks to show his ability (or inability?) at remembering lyrics, expose his (secret?) love of a genre that most of us don't approve of, and to talk about their upcoming album New Low, out everywhere May 21. One o...

So this episode was supposed to be out two weeks ago so there's that. Michelle was having a mental block on the whole editing thing. So I want no complaints. Just be thankful the whole show wasn't CANCELLED! Plus you're getting an extra bonus later today to make up for it. MOVING ON! The Offspring released a new album AFTER NINE YEARS! (Lots of yelling today) So the ladies of The Moshpit Podcast talked about said album,...

Episode 37: The Morality of Music

The ladies of The Moshpit hop on their soapboxes this week and get outraged about outrage. Super meta and shit. Sparked from the controversy surrounding Lil Nas X and his Montero music video, they talk about the level of responsibility we can expect artists to take when the youts are exposed to the adult content they release. Spoiler alert: it's ground floor level zero responsibility. Aside from this in-depth conversation about...

Have you ever heard a pop song and it was cool and all but you wished it was just a little punchier? The guitars grittier? The drums railed on that bass pedal? Some screaming? Well you can get all that and more when you listen to pop punk versions of those sometimes shitty pop songs! And you know who can tell you about the best of the best when it comes to pop punk covers? The ladies of the Moshpit Podcast because we all know they ...

ALL THE MUSIC NEWS. Nothing else. That is this episode. This is your life now. Just trapped in a perpetual loop of song after song recommendation. Never knowing when we'll stop. All your mental energy is gone because you've dedicated all your waking and even some sleeping hours to listening to every song we discuss. You don't have the will to do even the simplest of things like making a grilled cheese or showering. The ...

Episode 34: We Make Up Our Own Rules

I walk this empty street on the Boulevard of Broken Bands. The ladies of The Moshpit Podcast are reminiscing on bands that have broken up this episode. That journey down memory lane takes the episode down a variety of tangents and rabbit holes. And per ush, there are conversations around the latest music releases by Justin Courtney Pierre, M...

Episode 33. Weird episode number. Because it's an episode with a lot of firsts. So you'd think it'd be like a cool numbered episode like 50 or something but it's not. But the firsts are cool. The ladies of the Moshpit Podcast talk about All Time Low for the first time ever. Just kidding. You know that's a massive lie. You're favorite hosts acknowledge they have a problem for the first time and admit they nee...

I'm going to keep it short and sweet this week. You're Welcome. The ladies of The Moshpit Podcast unpack all the emotions they felt as they delve into a track by track review of You're Welcome by A Day to Remember. Emotions like confusion, rage, existential horror. Typical millennial shit. Don't worry it's not all bad as they go into a ton of new music by Magnolia Park, The Offspring, Doll Skin, Youth Fountain, ...

Enemies of the heir, BEWARE! The Moshpit Vault has been opened once more. And this time for a track by track throwback of Hawthorne Heights' sophomore album If Only You Were Lonely. The ladies of The Moshpit Podcast did their waiting! 15 years of it! And finally listened to this album and had some opinions. But you know that is what the podcast is about... their opinions on pop punk and emo music so as far as descriptions go th...

Episode 30: I don't care if I'm a guilty pleasure for you

Hold up! Stop! Wait a minute! Fill my cup. Put some liquor in it. You're going to need it because you have reached The Moshpit Podcast's Pop Punk Break. You read that right. You are not yet too drunk to read this episode description. You know what I'm talking about. With one eye closed, head tilted with your phone out at arm's length trying to text your ex something coherent. Anyway, I digress. The ladies of The Mos...

Video undeniably killed the radio star (though you could say radio or podcasts at least are making a comeback) but I don't know if I agree with Mod Sun that internet killed the rockstar because, well, we are drowning in rock stars in the scene. Whether Mod Sun makes the cut remains to be seen (or scene hehe) in this week's episode of The Moshpit Podcast. Your lovely lady hosts boot up their dial-up connection to get in tune...

Yeah it's Superbowl Sunday but who wants to watch Tom Brady win another Superbowl? Not I, your nameless, faceless narrator. So here I am telling you to listen to the ladies of The Moshpit Podcast talk to Sage Viscovi of Signs of Progress and here you are ready to listen to said episode at my suggestion. You are about to listen to probably the most HI-larious episode ever because horns get tooted, Paramore songs get sung, and on...

Another episode, another weird fucking topic. There are many things that got us all into pop-punk, but the data scene-tists on The Moshpit Podcast have established a direct correlation between an affinity for pop-punk and the childhood staple that is Disney. That's right moshers, the ladies of the Moshpit Podcast will be providing peer-reviewed evidence of the effects of the House of Mouse's influence on our impressionable ...

It doesn't even matter what the ladies of The Moshpit Podcast talked about this episode because, friends, Kelly, our resident ray of sunshine, was legitimately mad this episode. As if the time-space continuum wasn't already fucked by the time travel this episode, Kelly's rage will definitely rupture the fabric of time. You would think opening The Moshpit Vault for the first time would be a happy occasion. What is The Mo...

Hope you are all reading this description because, I swear, next week will be the most depressing episode ever because Michelle will be a straight-up Eeyore if you haven't. That will be next week though (if you, as our listener, don't do your job). This week, all the celebrations! Poppin' champagne for events in the personal lives of the ladies of The Moshpit Podcast and poppin' champagne with orange juice to celebr...

Episode 24: I Can Scream Emotions Better Than I Can Sing Them

Happy New Year! What's up version 2021 moshers? You ready for another moshy year?! Good. Glad to hear it. We want aaaaaall of that pop punk energy. Let's fucking harvest that shit and unleash it on the world this year when we can disrespect our surroundings together. (Manifesting that concert life for 2021. Vaccine FTW!) Now onto the episode, music news is back! After a long long month where the ladies of The Moshpit do hol...

December 31, 2020 • 107 min
Surprise! Episode 23, the last episode of 2020, did not come out on the usual Sunday but on New Year's Eve 2020 to ring in 2021 as the best and worst of 2020 are awarded. The standard recognitions are there but the ladies of The Moshpit give out some cool and quirky awards like Best Cover Art and Best Vocal Moment. What does that even mean? Not even Michelle, Brianne, and Kelly are sure. But tune in to find out!  Thank you all ...
Mark as Played