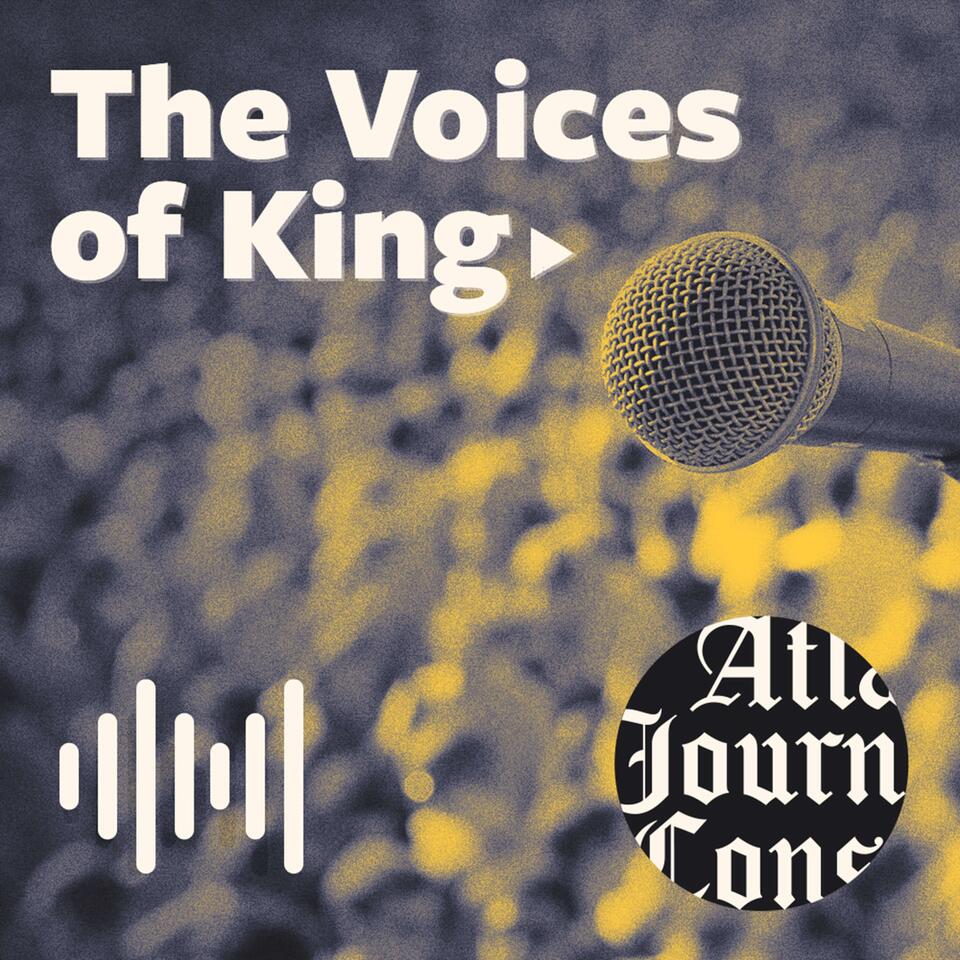 The Voices of King

Thirteen people. Thirteen people who bore witness to the last days of the Rev. Dr. Martin Luther King Jr. Originally recorded by The Atlanta Journal-Constitution in 2008 and released as a podcast in 2018 to mark the 50th anniversary of Dr. King’s death. The AJC’s revisits these important conversations to give you a glimpse inside the making of history. Episodes will be released every Thursday. Hosted by Ryon Horne. Each episode will be made available through the Unapologetically ATL newsletter, but you can also subscribe to “The Voices of King” on Spotify, Apple Podcasts, Google Podcasts, Amazon Music, Stitcher or wherever you get your podcasts so you never miss an episode.

What a way to be introduced to the world.

On April 9, 1968, just five days after her father was assassinated and two weeks after her 5th birthday, Bernice King found herself slumped on her mother’s lap.

There she was, the youngest of Coretta and Martin Luther King Jr.’s four children, in a packed Ebenezer Baptist Church, dressed in a white dress. Her eyes were expressionless. A baby, mourning a father.

Although a photographer from Ebo...

For Xernona Clayton, standing over Martin Luther King Jr.’s body as it lay in a casket inside Spelman College’s Sisters Chapel, the feeling was unreal.

Looking at her friend, she noticed a “big blob on his right cheek. Red like the red clay of Georgia. It was pretty unsightly.”

Her mind flashed back to just three months earlier when she planned a rousing surprise party for King to celebrate his 39th birthday.

She thought about how exh...

Martin Luther King III had to grow up fast.

At such a young age, the eldest son of the civil rights icon was forced to break away from his shy and inward personality to take on the role of the man of the house.

In this 2008 interview with The Atlanta Journal-Constitution, King III gave insight into the King household after the tr...

When the whole world wanted the story, it was up to Kathryn Johnson to tell them.

“When is the funeral?”

“Who has visited the family?”

In the hours and days following the assassination of Martin Luther King Jr., Johnson, a veteran reporter for the Associated Press, was the only journalist allowed in the home of Coretta Scott King to tell the family’s story.

That was the bond and trust she had established with the King...

Christine King Farris couldn’t force herself to get off the plane.

Who could blame her really? The older sister of Martin Luther King Jr. had rushed to Memphis to retrieve the body of her brother after he had been gunned down a day earlier on April 4, 1968.

She didn’t want to step foot on the soil where her brother was murdered.

In a gripping 2008 interview with The Atlanta Journal-Constitution, Farris, the last living King sibling, s...

Tyrone Brooks had never driven so fast in his young life.

But there he was in the early morning hours of April 5, 1968, racing toward Memphis in a brand-new white Thunderbird.

The 22-year-old was determined to reach the city where Martin Luther King Jr. had just been murdered hours earlier on April 4.

The Rev. Ralph David Abernathy, who suddenly became the new president of the Southern Christian Leadership Conference, had summoned all...

Andrew Young was still recovering from the pillow fight.

In the early evening hours of April 4, Young walked into Martin Luther King Jr.’s room at the Lorraine Motel.

Young, one of King’s key lieutenants had spent all day testifying in federal court to get a restraining order lifted on the march in support of Memphis sanitation workers, who had been on strike since early February.

When he walked in the door, King mocked agitation and ...

They were on their way to dinner.

In the early evening hours of April 4, 1968, Martin Luther King Jr. stepped out onto the balcony of the Lorraine Motel in Memphis to gather his troops.

Soon, they would be expected at the home of the Rev. Samuel Billy Kyles for dinner.

But as they gathered, a shot rang out.

In 2008, on the 40th anniversary of Dr. Martin Luther King’s death, John Lewis was one of 13 people that The Atlanta Journal-Constitution sat down with to record their stories.

We are re-releasing these interviews as a 13-part podcast hosted by Multimedia Journalist Ryon Horne called the Voice of King.

Lewis is synonymous with the Civil Rights Movement. In 1965, during a protest in Selma, Alabama, Lewis became the symbol of the as...

Getting arrested at the age of 6 or 7, was just something COULD HAPPEN, when you’re the child of a civil rights icon. Ralph David Abernathy, III, a former Georgia state senator and namesake son of a civil rights icon, describes in an interview with the AJC in 2008, how intimately close his family was with the King family. Perhaps one of the more emotionally interviews we conducted ten years ago, Abernathy, III, shared the dynamics ...

It was humor, in the face of danger and possible death, that stands out the most when Reverend Joseph Lowery remembers his friend Dr. Martin Luther King, Jr. In this episode of “The Voices of King,” Lowery dissects some of King’s sermons that made the civil rights icon a revolutionary leader.

Please subscribe to the Voices of King from The Atlanta Journal-Constitution on Spotify, Apple Podcasts, Google Podcasts,  Stitcher, Amazon Mu...

Juanita Abernathy, the wife of the Rev. Ralph David Abernathy, talks in detail about the unbreakable bond her husband and Dr. King held. She shares stories about how the Kings and the Abernathys met, raising children in the movement, and the constant danger they faced while trying to change the world.

Please subscribe to the Voices of King from The Atlanta Journal-Constitution on Spotify, Apple Podcasts, Google Podcasts,  Stitcher, ...

They say “journalism is the first rough draft of history.”

Perhaps no one knows that better than Earl Caldwell. On April 4, 1968, then a reporter for The New York Times, Caldwell was the only reporter to witness the assassination of Martin Luther King Jr.

As The Atlanta Journal-Constitution and Unapologetically ATL mark the 54 anniversary of King’s murder, we open our podcast series, “The Voices of King,” with Caldwell’s first-hand a...

Thirteen people. Thirteen people who bore witness to the last days of the Rev. Dr. Martin Luther King Jr. Originally recorded by The Atlanta Journal-Constitution in 2008 and released as a podcast in 2018 to mark the 50th anniversary of Dr. King’s death. The AJC’s revisits these important conversations to give you a glimpse inside the making of history. Episodes will be released every Thursday, starting March 31. Hosted by Ryon Horn...