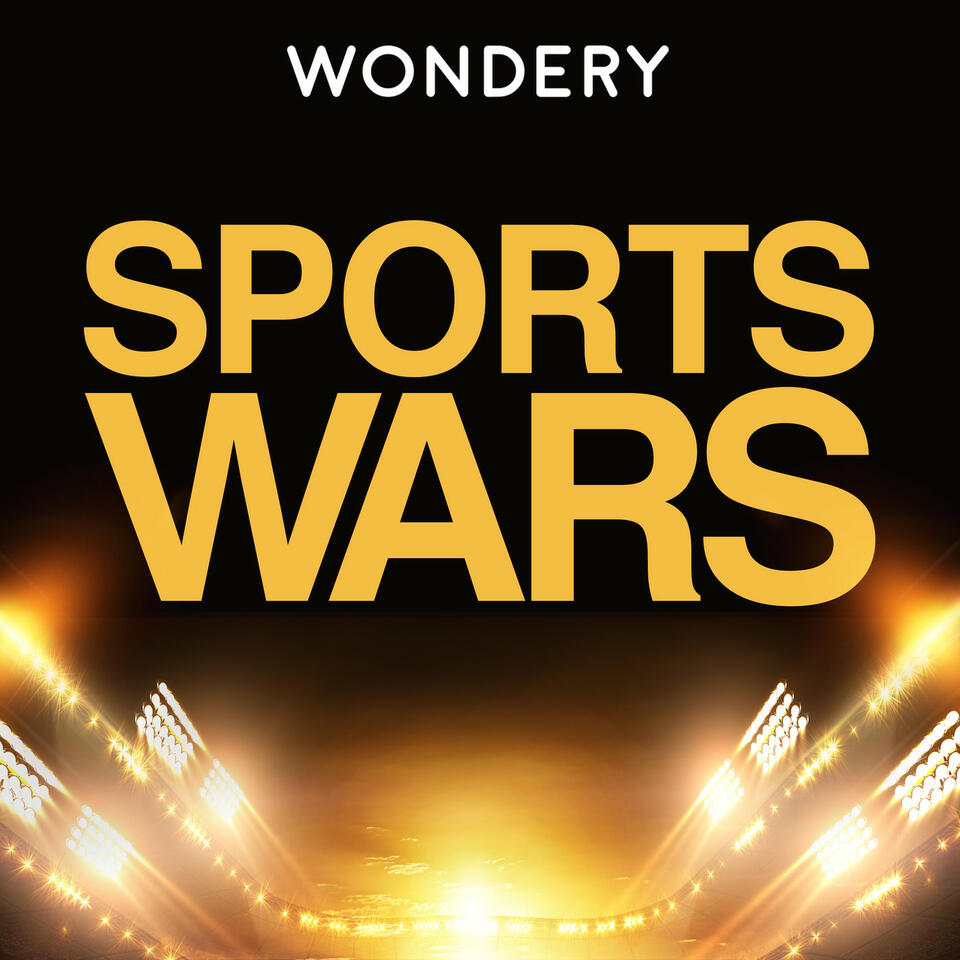 Sports rivalries can fuel fans and athletes to fight and argue for years. But what’s the real story behind these epic battles? From Wondery, the company behind “Business Wars”, “Gladiator” and “The Lead” comes SPORTS WARS, a new series that offers an immersive look at some of the greatest athletic rivalries of all time: two superpower nations facing off in the Miracle on Ice. The battle for the starting quarterback gig in Green Bay between Brett Favre and Aaron Rodgers. And many more. Host Dan Rubenstein (Sports Illustrated, SB Nation) will take you from the grudge matches to the pranks, from the tantrums to the triumphs: what really happened, who was right, who was wrong -- and you can decide whose side you’re on. Most episodes are available for free with ads. You can binge the entire series, including exclusive seasons, ad-free on Wondery+ or on Amazon Music with a Prime membership or Amazon Music Unlimited subscription.

Brett Favre vs. Aaron Rodgers. Michael Jordan vs. Isiah Thomas. And many more...

It's 2005 and The Green Bay Packers are on the clock in this year's NFL Draft. The last thing most Packers fans think the team needs in the draft is a new quarterback. Their team already has Hall of Famer, Brett Favre, who is in the middle of his record-breaking Iron Man streak for consecutive games started. But when Aaron Rodgers slips in the draft, the new Packers GM makes a risky call, and sets up a bitter rivalry betwee...

Favre vs. Rodgers - The Savior from Mississippi | 2

In 1991, the Atlanta Falcons tire of the antics of their rookie quarterback, Brett Favre. They decide to trade him to Green Bay where he soon takes over as the starting quarterback. He begins a streak of consecutive starts that will turn him into a legend. Along the way, he battles his competition, his coaches and his demons. As he is pursuing his first Super Bowl, a kid in California named Aaron Rodgers is watching at home and dre...

Brett Favre takes Titletown to the Super Bowl for the first time in 29 years. Aaron Rodgers tries to prove he's good enough to play college football and be chosen by his favorite team - the 49ers.

Aaron Rodgers starts his career as the backup QB in Green Bay as Brett Favre ponders retirement. When Favre leads the Packers to their best season in years, the legendary quarterback decides he may not be ready to turn the team over to Rodgers after all.

Brett Favre comes out of retirement again, but this time Green Bay is moving on to the Aaron Rodgers era. The Packers trade Favre to the Jets, turning their legendary QB into a new rival.

Favre vs Rodgers - One Last Chance | 6

As the new quarterback of the rival Minnesota Vikings, Brett Favre wants revenge against the Packers. He won’t retire until he gets his chance to beat Rodgers and Green Bay in 2009. Meanwhile, Rodgers tries to show the Packers he’s ready to be the new face of the franchise.

Jeff Pearlman-- the best selling author of Gunslinger: The Remarkable, Improbable, Iconic Life of Brett Favre-- joins Sports Wars to discuss the rivalry between Favre and Aaron Rodgers in Green Bay. They began as competitors on the same team, but ended up battling for division titles and respect when Favre came out of retirement with the Vikings. As Rodgers heads toward the second half of his career, some think he’s become the new ...

It’s 1985. Michael Jordan is a flashy Chicago Bulls rookie, and Isiah Thomas is an established star for the Detroit Pistons. When they’re thrust together at the NBA All-Star Game, it’s not exactly love at first sight. Jordan feels slighted by Isiah, and Isiah can’t stand Jordan’s swagger. A brutal rivalry starts in a weekend and lasts for over a decade.

By 1987, Michael Jordan has established himself as the NBA’s most exciting player—not to mention the league’s top scorer. But it’s Isiah Thomas and the Detroit Pistons who dominate the Eastern Conference, and their tough play earns them a new nickname, the Bad Boys. When Jordan threatens the Pistons’ reign, Isiah and his teammates must find a way to stop Jordan in his tracks. Their plan? The “Jordan Rules.”

Support us by supporting ...

Jordan vs Isiah - The Triangle | 3

Michael Jordan is unstoppable—except when it comes to Isiah Thomas and the Detroit Pistons. When the Bad Boys cruise to back-to-back championships in ’89 and ’90, Jordan’s frustration reaches an all-time high. He’s willing to take whatever help he can get, even if it comes from the weirdo who’s now coaching the Bulls, Phil Jackson.

1991. At long last, Michael Jordan beats Isiah Thomas, ends the Bad Boys era, and ushers in a Bulls dynasty. Jordan has the edge over his longtime rival, but that doesn’t mean he’s forgotten the Freeze Out or the “Jordan Rules.” He’s still out for revenge. When he’s asked to join the Dream Team, Jordan sees the perfect opportunity.

Veteran reporter Sam Smith followed the Chicago Bulls for their 1990–91 season and turned that experience into a bestselling book, “The Jordan Rules.” It’s a searing, unmatched portrait of Michael Jordan’s path to glory. On this episode of Sports Wars, Smith explains why the Jordan–Isiah feud is probably the most ferocious in history, and he sets the record straight on why Jordan left the NBA to play baseball (hint: it didn’t have ...

For three decades, David Aldridge has covered the NBA for outlets like The Washington Post, The Philadelphia Inquirer, and The Athletic. On this episode of Sports Wars, he digs into the league’s long history of mighty matchups and argues it’s often the rivalries that make basketball great.

For the next six episodes, we're focusing on two of the greatest rivalries in college football: Georgia vs. Florida and Texas vs. Oklahoma. We begin with Georgia vs. Florida, a long-simmering, start-studded, completely unruly matchup. These schools have hated each other for a century. Here's why.

To hear more episodes of Sports Wars: Georgia vs Florida, listen exclusively with Wondery+. Join Wondery+ for this and mor...

What makes the rivalry between Texas and Oklahoma so doggone contentious? Maybe it’s that these states hate each other so much they almost went to war over a bridge. Maybe it’s the underhanded stunts coaches like Mike Leach have pulled to win. Or maybe it’s just because with great proximity comes great hostility. Over the next three episodes, we’ll dig into this unparalleled grudge match.

Blasts. Jacks. Moonshots. Grand salamis. Nothing's quite so mythical as baseball's home run. In 1998, Mark McGwire and Sammy Sosa reminded the nation of that as they tried to smash into the record books. They thought they were going to save baseball. Instead, they destroyed their reputations.

Mark McGwire doesn't leave college with a diploma: he leaves with a beautiful swing and a ticket to the show. Pretty soon, though, his personal life is in tatters and so is his game. Can bulking up he get him back on track? Meanwhile, Sammy Sosa explodes into the majors. But he also implodes. He's streaky, and that streakiness zaps his confidence. When the Cubs sign him to a huge deal, he'll have to prove, once and for ...

McGwire vs Sosa — The Race Begins | 3

It's 1998, the race to 61 homers is on, and Mark McGwire is a force to be reckoned with. Then comes the All-Star break. Suddenly his bat slows down and Sammy's speeds up.

Wrigley Field — August 19th, 1998. The Cubs are facing the Cardinals, which means Sammy Sosa is about to duke it out, at bat after at bat, with Mark McGwire. It's a metaphor for the whole season, really, each man a moonshot away from besting the other.

Support is by supporting our sponsors!