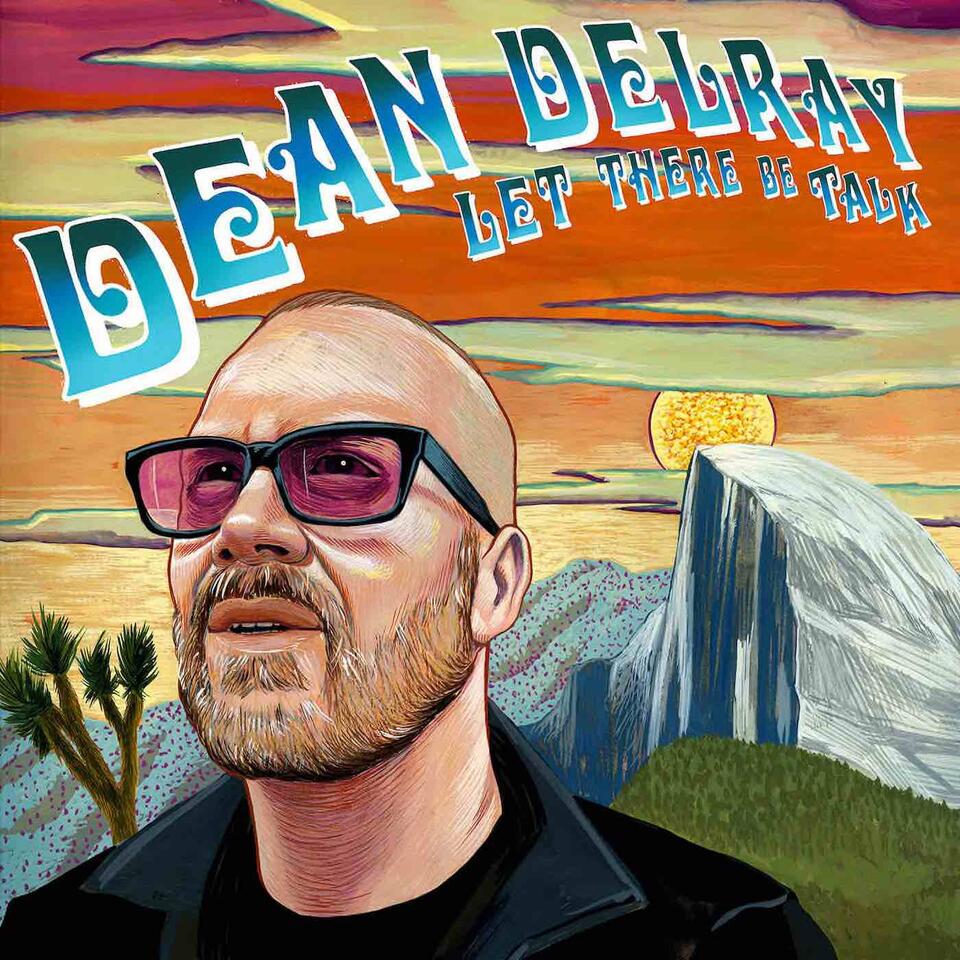 Dean Delray's LET THERE BE TALK

Dean Delray's "Let There Be Talk." This original podcast is a unique blend of rock and comedy talk with some of the biggest names in music, comedy and entertainment.

After 10 years it has finally happened. The legend himself Mr Zakk Wylde stops by Let There Be Talk for an in-depth conversation on all things Zakk.

We dive into his years with Ozzy, His Pride and Glory days and of course Black Label Society who have a new record coming out on Black Friday.

Zakk and I also talk about his guitar company Wylde Audio. Do yourself a favor hit subscribe and sit back and enjoy this episode.

Today my friend Jerry Cantrell returns to the show to talk all about his brand new solo record Brighten which will be released Oct 29th 2021.

You can see the brand new video for Brighten on Youtube and you can also stream Brighten and his other single Atone on all your favorite streaming platforms right now.

Jerry and I dive into all kinds of cool stuff today including the writing and recording process of Brighten, His new Gibson L...

Today on  Let There Be Talk my guest is former FBI Agent Vincent D'Agostino.

Vincent was involved in the investigation of Ross Ulbricht aka Dread Pirate Roberts while he was working for the FBI. He is also a Bitcoin fanatic who helped me understand Bitcoin on todays episode.

These days Vincent is a Stand Up Comedian as well as a cyber breach investigator.

Tune in and hear this mans crazy stories on episode #608 of LET THERE BE ...

Today on Let There Be Talk I am featuring a brand new artist Kate Vargas.

A few months ago my good friend Eric McFadden turned me on to this record called Rumpumpo by Kate Vargas and I was blown away. I knew I had to have her on the show and dig into her journey.

From growing up in a small artist community in New Mexico to going to Berklee College of Music to grinding it out in the Coffee Shop Open Mics in NYC, It's all here.

Today I sit down with another San Francisco Bay Area legend Mr Fee Waybill of The Tubes.

Growing up in the 70's in the Bay Area I was lucky to see some incredible live music. 1 band that really blew my young mind was The Tubes. The first time I saw them I couldn't believe what I was seeing and hearing. White Punks on Dope was a San Francisco Anthem and I was on board.

Over the years I would go on to see this band many times...

Today I sit down in the box office of one of the greatest Rock n Roll venues in America the Cow Palace located in San Francisco.

I recently was up in the Bay Area doing some Stand Up Comedy and Andrew Shreve reached out and said he works at the Cow Palace and asked if I would like to come take a tour and maybe do a podcast in the venue. I screamed YES YES YES and headed over to the venue for a full on tour of the very building that...

Today I sit down and talk all things Rock n Roll with Dave Wyndorf of Monster Magnet.

This man has been delivering a strong dose of Stoner Rock for most of his lifetime.

Monster Magnet has a fantastic new covers record out called A Better Dystopia featuring some incredible deep tracks from some of the kings of proto-metal.

Tune in and enjoy this great episode brought to you by Standard and Strange.

Today I sit down with Bay Area legend Jack Blades of Night Ranger and dive deep into his musical history.

Jack has been killing it for years starting all the way back in the 70's in his Rubicon days playing Cal Jam 2.

I was a young kid hanging out at rock clubs in the Bay Area watching bands like Night Ranger, Y&T, Huey Lewis and The News, Eric Martin and Gamma just kill it on stage nightly.

The Bay Area was rich with Music...

#602 : Justin Kreutzmann / Director of Let There Be Drums

Today I sit down with film maker Justin Kreutzmann and talk all about his new documentary film Let There Be Drums.

This mans father Bill is of course the drummer for the Grateful Dead so Justin has been around Musicians and Drums all his life. The film is just fantastic and really dives into a celebration of some of our great drummers in the world of Rock N Roll.

Justin has worked on some incredible projects throughout his life in...

#601 : Morgan Neville / Director of Roadrunner: A Film About Anthony Bourdain

Today we have an Oscar winning filmmaker on the show Mr Morgan Neville director of Roadrunner: A Film About Anthony Bourdain.

This man has made some incredible Docs over the years including 20 Feet From Stardom, Won't You Be My Neighbor and Keith Richards: Under The Influence.

It was an Honor to talk to Morgan, I really love his work.

Sit back and enjoy his story and make sure you go see Roadrunner ASAP.

This mans music has been the soundtrack of my life for over 30 years. Mother Love Bone, Pearl Jam, Brad and Temple of the Dog are absolutely next level to me.

I feel that Stone is one of the most underrated Songwriters of our time and It was an Honor to talk to him about all things Stone.

We dive deep into his process of Writing and Recording and we e...

I don't usually put out an episode on a Friday in fact I've never done it but today we have a brand new Wallflowers records out and I thought what better way to celebrate it than to have Jakob come by and talk all about it.

Exit Wounds is a smoking record taking it back to that classic Bringing  Down The Horse sound. Butch Walker was onboard this time around to Produce and it works big time.

We also dive into the Documentar...

Today I sit down with my friend, comedian Mike Vinn.

Mike's dream in life was to join the Military and to also do Stand Up Comedy and he has achieved both of those goals.

From joining the Marines to selling Furniture to getting a job at the La Jolla Comedy Store this man has a great story that I know you are gonna love.

I met Mike 11 years ago and I must say he and the La Jolla Comedy Store have helped me out immensely.

Today we have the great Orianthi on the show. Not only is she a killer guitar player, She is also an incredible Singer/Songwriter

Orianthi has been playing guitar most of her life inspired at an early age by Carlos Santana and the early Blues Legends. Her father bought her a Paul Reed Smith guitar and she never put it down.

After a run as Alice Cooper's guitar player Orianthi was spotted by Michael Jackson and he quickly asked ...

Today will be a Metal Monday version of LET THERE BE TALK with my guest Jimmy Bower of EYEHATEGOD, Super Joint and Down.

This man has been crushing the Riffs for over 30 years and has no sign of stopping.

EYEHATEGOD released it's 6th record back in March called - A History Of Nomadic Behavior that is absolute fire. So do yourself a favor and buy it today and also get some tickets to see them live this summer at a festival near ...

Today I sit down with a legend in the Music Merch world Mr Norman Perry president of Perryscope Productions.

Norman started out back in his early teens booking bands at the High School dances eventually working his way up to be one of the great Canadian concert promoters.

In 1980 he was the Promoter for the AC/DC Back In Black tour through Canada so that right away made me want to talk to him but there is so much more.

Today it's another legendary Drummer on the show, Mr Matt Chamberlain.

Let me give you just a small run down of who this man has recorded with. David Bowie, Elton John, The Wallflowers, Bruce Springsteen, The Who, Fiona Apple and now he his Bob Dylan's drummer.

He played drums on Bobs recent record with the #1 song Murder Most Foul and has been Bobs live drummer for the last few years.

Today is new music day with Amanda Hardy of the rock band Bexley.

I love sharing new music with all of you and I really think you guys are going to dig Amanda's story.

Amanda grew up in Seattle and fell in love with the grunge scene but at 24 years old she didn't get to experience it live but the music has influenced her heavily and she is happy to carry the torch.

Bexley has a new album about to drop and I must say it kick...

In the 70's into the 80's Dennis DeYoung wrote and sang some of the biggest FM Radio Hits ever. To this day Styx dominates the radio airwaves with an army of hit songs like Lady, To Much Time On My Hands, Babe, Blue Collar Man, Renegade, Come Sail Away and so many more.

It was an Honor to sit down with Dennis and talk about his incredible long successful career.

Dennis has a brand new solo album coming out in June called 26...

Today I sit down with the great Emily Armstrong of Dead Sara.

Dead Sara have been grinding it out for over 18 years and have never stopped. Their debut record came out in 2012 and had the smash hit Weatherman and right away they hit the road on the VANS WARPED Tour as well as touring with huge bands like Muse, The Offspring and Bush.