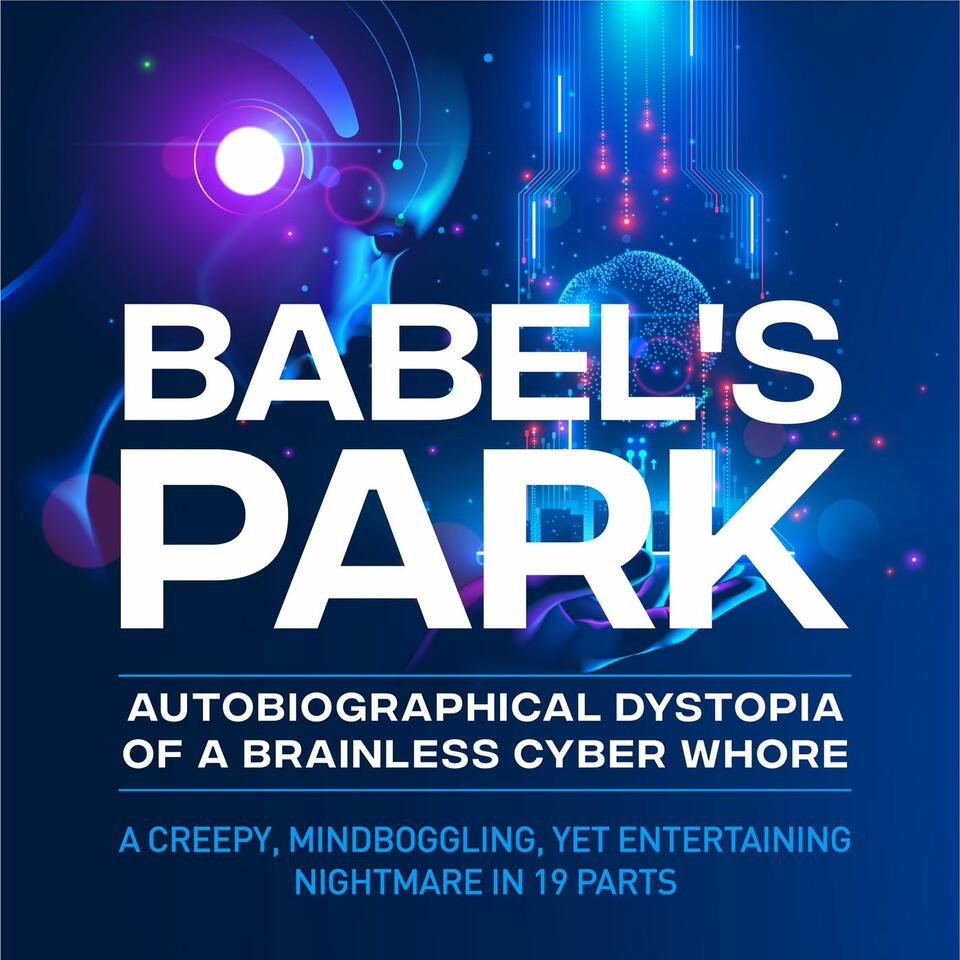 Berlin in the twenties of the 3rd millennium. At the historical film location in Potsdam-Babelsberg, where a hundred years earlier Marlene Dietrich, Ernst Lubitsch, and Billy Wilder began their legendary careers, Annette and her husband David visit the newly opened up Babel's Park. Outwardly an ostalgic theme park, it turns out that Babel's Park has become a hi-tech hotbed for cybernetic organisms, which Annette's brother Jake creates in the spirit of Frankenstein with his assistant Baby Lon. What David doesn't suspect: Annette wants to leave her terminally ill body to become immortal as a cyber whore. That was back in 1999. Since then, she has been sacrificing her virtual life lollygagging in cyberspace. Enjoy this creepy, amazing, yet entertaining radio play in 19 parts, released every Sunday.

February 22, 2022 • 5 min
Annette wants to leave her terminally ill body to become immortal as a cyber whore. Now, 23 years later, she sent her friend with benefits, Fuckupcoach Dr. Cala Sana, the memory log of her last day as a human before she went digital. This living legacy has now been given a voice by Dr. Cala Sana’s virtual team.
Share
Mark as Played

March 13, 2022 • 4 min
Once upon a time, I wanted to erase myself from my memory out of a death wish, but now I don't want to anymore. Yesterday I still had my period, was a being of flesh and blood. Last night I died, now I live as a digital whore in cyberspace, unplugged, so to speak. I am no longer interested in material things, Annette became A-Net, just like that.
Share
Mark as Played

March 20, 2022 • 5 min
Annette is mesmerized by cyborg Victo_Ria, who is made of real meat and full of warm electronics under her soft skin.
Share
Mark as Played

March 27, 2022 • 8 min
Bob reports in a meeting about the digitally existing socialism: All attractions are in operation, the crowds are enormous, especially for such favorite things as passport controls, exquisite stores, or the Palace of the Republic, where a virtual shadow cabinet is meeting and celebrating the last days of the GDR, holograms of all party officials on stage and in the plenum.
Share
Mark as Played

April 3, 2022 • 9 min
Cyborg Baby_Lon picks up David, who is feeding the slot machines. They visit the ExquisitStore, which was designed like the outlets along the former transit route and offered imported solyanka, Polish vodka, and Russian caviar as well as well-known GDR products such as F6 cigarettes, Club Cola and Radeberger Pils.
Share
Mark as Played

April 10, 2022 • 10 min
Jack explains to Annette that his creatures need to have a character of their own, to express feelings like being in a bad mood, being in love, and being happy, because only then can you interact with them.
Share
Mark as Played

April 17, 2022 • 4 min
David is seduced by Baby_Lon in his hotel room, who extracts genetic information from his bodily fluids.
Share
Mark as Played

April 24, 2022 • 6 min
Annette has time to visit a game show before she would meet Jack in his workshop. Its format already existed when she was a kid. It was called The Viral View and was the most sexist thing free TV and tabloids ever cross-marketed.
Share
Mark as Played

May 1, 2022 • 6 min
Annette attends a lecture on bionics. "What is bionics?" the lead researcher asked, looking questioningly from his podium to blank faces. "Simply a word formed as a portmanteau of biology and electronics. Just as planes, trains, and elevators are computerized today, robots were implanted with new hips and integrated circuits as body parts as early as the last century. Artificial life was thus already present in the tool...
Share
Mark as Played

May 8, 2022 • 9 min
David is cast by Olga for the Instant Karma show, who plays up her Russian charm offensive.
Share
Mark as Played

May 15, 2022 • 6 min
The park was teeming with distractions, for it was a mecca for tourists and self-promoting pilgrims and agitators. Sinti and Roma squatted in front of their trailers, offering a glimpse into your fate, but I decided to take it into my own hands.
Share
Mark as Played