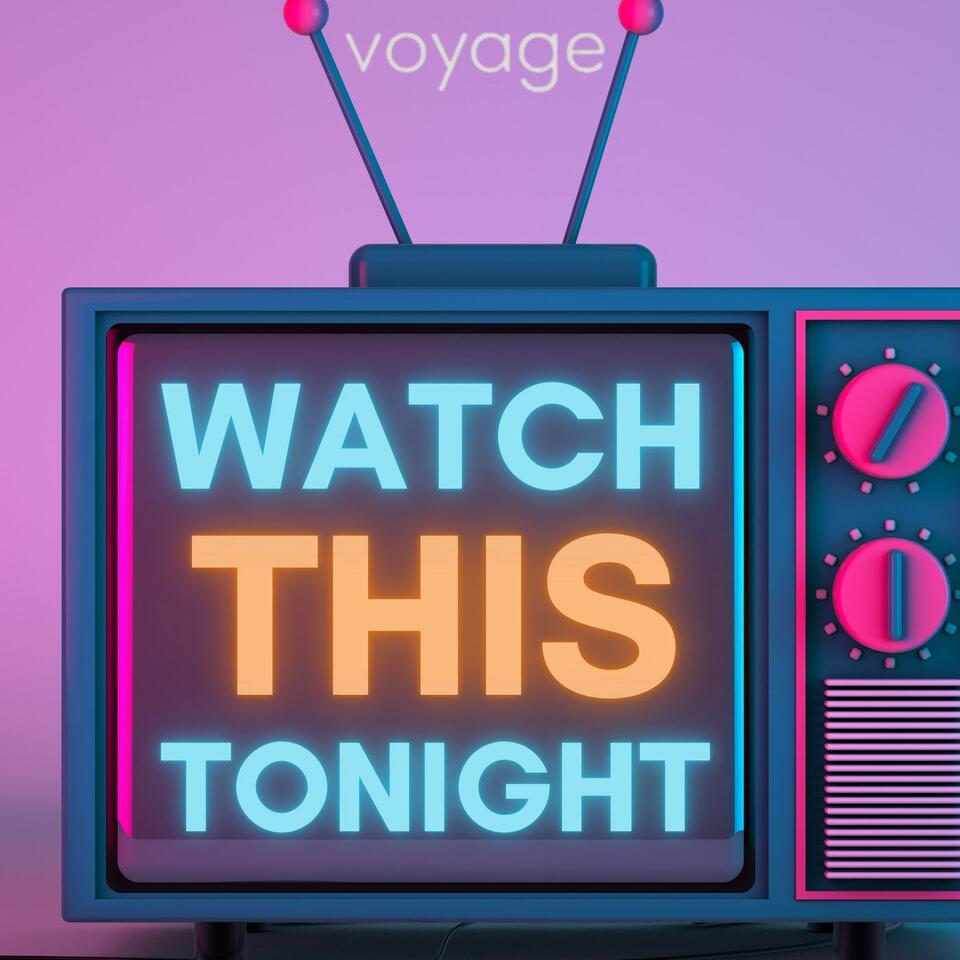 Binge-worthy curated picks, twice a week. If you're like me, and at the end of a long day you have a precious hour to watch something great before you fall asleep, but you never know what to watch... this is the show for you. The best selections in TV, movies, and documentaries across HBO, Hulu, Amazon, Paramount+, Apple+, Netflix and anywhere else (from former film critic, film executive, produced screenwriter in film & TV, and podcast producer Dan Benamor). New episodes drop Wednesdays and Fridays. From Voyage Media.

October 3, 2022 • 9 min
Perhaps the best example of this subject, Judd Apatow's film This Is 40 is a completely different viewing experience if you watch it in your 20s (like I did when it first came out) or approaching 40 (like I am now). What to a younger viewer might seem frivolous or small in stakes or plotless, to an older viewer feels one thousand percent true to life. The movie is funny no matter what age you watch it, but even more so if you a...
Mark as Played

September 30, 2022 • 12 min
Don't be thrown by the title, this show is fresh, funny, and surprisingly TV-MA at times in its humor. Given the pedigree (from Steve Levitan, co-creator of Modern Family, starring Keegan Michael Key, Judi Greer, Rachel Bloom, Paul Reiser, and Johnny Knoxville), we should never have doubted it. If you've got an itch for a great half-hour comedy, Reboot on Hulu is exactly that. Let me know your thoughts on it, or on the podc...
Mark as Played

September 28, 2022 • 11 min
We get all versions of Jon Bernthal here. Prison Jon Bernthal. Suave Jon Bernthal. Vulnerable Jon Bernthal. The great unexpected discovery of this Showtime series, American Gigolo, though, is the sparkling romantic chemistry between Jon Bernthal and Gretchen Mol, who are exploding off the screen in every moment they share. The show has some bold choices that may or may not work for all viewers, but there's certainly enough here...
Mark as Played

September 26, 2022 • 12 min
The film equivalent of a charming fun criminal cousin coming to visit, Den of Thieves is Gerard Butler having the most pure joy of his career, unhinging his jaw to not just chew but completely consume the scenery, ably supported by Pablo Schreiber in what is effectively this film's version of the DeNiro role in Heat. While the movie has many similarities to that film, it still makes its own way, especially with a late third-act...
Mark as Played

September 23, 2022 • 17 min
Tony Gilroy, Tony Gilroy, Tony Gilroy. The unique circumstances of this Disney+ Star Wars streaming television show are that Tony came in off the success of Rogue One, with the creative freedom and backing to push Star Wars into real moral ambiguity, and insert his own unique authorial voice into the mix. He's arguably an ideal candidate, because Tony's storytelling is simultaneously so classical and so distinctively hi...
Mark as Played

September 21, 2022 • 13 min
The best show you've been sleeping on, Amazon Prime's TV series Zero, Zero, Zero is a stunning accomplishment that interweaves one story of a massive cocaine shipment across multiple countries, with a stellar international cast (including Gabriel Byrne, Dane Dehaan, Andrea Riseborough), haunting music from the Scottish rock band Mogwai, and assured, compelling direction from the great Stefano Sollima (Sicario: Day of the So...
Mark as Played

September 19, 2022 • 9 min
There is no other podcast about this movie exactly like this one. THE DEPARTED is my favorite movie of all time, but I didn't want to do just any THE DEPARTED podcast. So I went back to the William Monahan screenplay, and found the five best moments in THE DEPARTED original screenplay that are NOT in the final film. Many people will prefer other Martin Scorsese films, but for me this remains my favorite to this day, for its mix...
Mark as Played

September 16, 2022 • 13 min
An Amazon Prime hidden gem, Emergency is a clever, subversive, fresh take on SUPERBAD through the lens of race in America. Consistently funny while also threading in an undercurrent of social commentary, and even some sneaky horror beats, this is a true original movie cloaked in the fabric of a familiar classic. A great, fast, engaging watch, this film is currently streaming on Amazon Prime. Let me know what you thought of Emergenc...
Mark as Played

September 14, 2022 • 16 min
Everyone who worked on this show will be a star in about three weeks. I'm fully convinced of that. Hulu's new streaming television series TELL ME LIES comes out of the gate so strong, with stellar acting from its leads Grace Van Patten and Jackson White, wickedly sharp, rockstar writing from series creator Meaghan Oppenheimer, strong direction from Jonathan Levine - this TV show is the total package, and I can't wait to...
Mark as Played

September 12, 2022 • 10 min
I don't find this movie anxiety inducing at all. Perhaps that's because I'm a reformed degenerate gambler. The Safdie Brothers Adam Sandler starring film UNCUT GEMS is a ghost of Christmas future movie for me, one I enjoy watching because I avoided going down the path of the character in the movie. Do you have any films you watch that way? Let me know at dan@voyagemedia.com, or at watch_this_tonight on Instagram or ...
Mark as Played

September 9, 2022 • 14 min
FX/Hulu continues their winning television streak with The Patient, a true two-hander starring Steve Carell and Domhnall Gleeson. If you've seen any marketing of the show, you'll know the high-concept premise. A serial killer abducts a therapist to try and get himself cured. Wild high-concept idea for a TV series, and through two episodes, they're pulling it off. A sneaky half-hour television drama (a rarity) that leave...
Mark as Played

September 7, 2022 • 12 min
More than just a novelty act, Rob McElhenney and Ryan Reynolds new documentary TV series Welcome To Wrexham on FX/Hulu really breaks down what it means to be a sports fan, especially in a blue collar town. The show is funny, that is a given, but it's also emotionally engaging and compelling for any sports fan (even if you've never seen a game of soccer). Let me know what you think of this TV series, or anything else we'...
Mark as Played

September 5, 2022 • 11 min
Why have I watched this movie 20 times? On the face of it, JC Chandor's ensemble drama, about an after-hours fiasco at a Wall Street firm, starring a starry ensemble including Zachary Quinto, Paul Bettany, Jeremy Irons, Stanley Tucci and Demi Moore, sounds like it should be dry and frankly, boring. It is anything but. The quality of the writing, the quality of the character work, the performances, the narrative structure, and t...
Mark as Played

WTT - House Of The Dragon

September 2, 2022 • 14 min
I was planning to not watch. It took an Instagram post from director Greg Yaitanes (Banshee, Quarry) to get me through the door. And once I was through the door, I shut the door behind me and planned to stay forever, within 15 minutes. This television series, with so much riding on it for HBO, steers its way steadily in through George RR Martin's world. We might have all over-thought this. Sunday nights, dragons, palace intrigu...
Mark as Played

August 31, 2022 • 10 min
Paul Schrader, Oscar Isaac, Tiffany Haddish, and degenerate gambling, in a film cut through with classic Schrader weirdness. Even if you're not a gambler, this is a unique, compelling, character-driven movie with strong performances and sharp turns. Recommended for anyone looking for a film off-the-beaten path and truly original. Available on HBOMax. I'd love to know what you thought if you've seen it. Write a review on...
Mark as Played

August 29, 2022 • 13 min
I saw this all-time-great George Clooney film when I was a 19-year-old, for the first time. I've seen it, in the ensuing 15 years, probably every year since. I even got to direct one of the actors from the film (Denis O'Hare) in an upcoming Voyage Media scripted podcast. Tony Gilroy's extraordinary movie is one of the best examples of writing, directing, and performance in an old-school adult drama, ever. Revisiting it ...
Mark as Played

August 26, 2022 • 13 min
Denis Lehane. Ray Liotta. Taron Egerton. Greg Kinnear. Paul Walter Hauser. A criminal goes undercover in a prison to try and get a serial killer to confess to where he's buried dead bodies... before an appeal may set the killer free. Apple+. If somehow you're not in just from this information, listen to find out how this series really delivers in all facets. One of the Exhibit A examples of the peak TV streaming era.

August 24, 2022 • 11 min
If you're a holdout, don't feel bad. I was too. I'll explain why I finally took the plunge with BETTER CALL SAUL. And if you are caught up with the show, stay tuned for a deep dive into the Gustavo wine scene, in the spoiler section. Maybe one of the best scenes ever in the history of television, for the quality of writing, performance, direction and cinematography. A little something for everyone, no matter what your l...
Mark as Played

August 22, 2022 • 10 min
Are there movies you rewatch every few years? Do you see these films differently, as you are in different stages of your life? Sideways is one of those movies to me, what I'm calling Watch This Tonight All-Stars. I've seen this movie at 18, 20, 25 and now 35, and each time I see different things in it, and find something new to love and analyze about it. Is that your experience? If so, listen in. Write in with YOUR Watch Th...
Mark as Played

August 19, 2022 • 10 min
A show that sneaks up on you, and then delivers powerhouse episodes on par with anything done by the all-time TV greats like The Sopranos and Breaking Bad. A show that can be riotously funny in one moment, and heartbreakingly tragic in the next. A tour-de-force of performance, direction, and scripting. Mr Inbetween is special. Do yourself a favor and watch it. Available on Hulu.

Join the discussion and add your thoughts on what tele...
Mark as Played