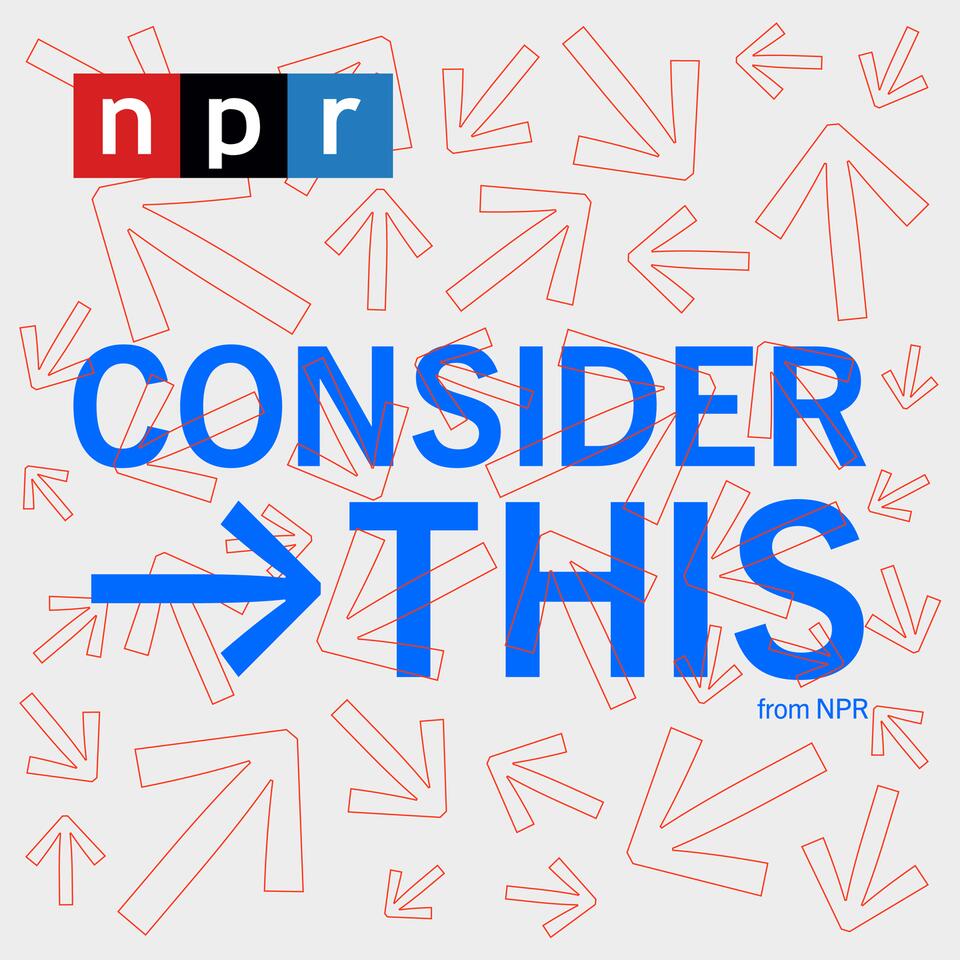 Consider This from NPR

Six days a week, from Monday through Saturday, the hosts of NPR's All Things Considered help you make sense of a major news story and what it means for you, in 15 minutes. In participating regions on weekdays, you'll also hear from local journalists about what's happening in your community.

August 19, 2022 • 12 min
President Biden had the narrowest possible Democratic Majority in the Senate when he took office. Yet the Biden administration's legislative successes continue to pile up.

He signed the American Rescue Plan just a couple months after taking office, followed by a major infrastructure bill last fall. Most recently, Biden signed the Inflation Reduction Act into law. These three legislative packages total up to around $4 trillion.

Trying To Heal The Wounds Of Partition, 75 Years Later

But that freedom was followed by chaos and bloodshed. Partition triggered a mass migration across a shared border, as millions of Muslims fled to Pakistan and millions of Hindus and Sikhs fled to India.

Violent attacks happened on both sides of the border. An estimated one million people were k...
Share
Mark as Played

Where Does Liz Cheney Go From Here?

Cheney, daughter of former Vice President Dick Cheney, came to office five years ago as a Republican darling. But everything shifted when she voted to impeach Trump after the January 6t...
Share
Mark as Played

The Trump administration's "Zero Tolerance" policy, better known as family separation, was short-lived, ending in June of 2018 after facing condemnation from the public and members of Congress.

For some families, it took years to reunite, and hundreds of families still have not been brought back together.

A U.S. Marine's View From Kabul's Airport As the City Fell to the Taliban

It's a day that many remember, as videos and images showed a chaotic scene at the Kabul airport, with thousands of Afghans desperately trying to flee the country.

Lt. Col. Chris Richardella was one of the officers leading the U.S. Marine Corps at the airport when the Taliban took over. In a conversation with NPR's Mary Louise Kelly, he recounts what fo...
Share
Mark as Played

August 13, 2022 • 18 min
At one point, over 90% of African Americans with a college degree obtained it from an HBCU. But in the decades following the legal dismantling of segregation, enrollment declined at HBCUs.

Recently, some HBCUs have seen a significant rise in applications. The boost could be due to more funding, celebrity students, or famous HBCU grads like Vice President Kamala Harris.

But informal conversations with Black students and their familie...
Share
Mark as Played

What Is The Status Of All Of Trump's Legal Woes?

Earlier this week, the FBI took several boxes of secret and top secret documents from Mar-a-Lago during a search of Trump's home. And on Friday, a federal judge unsealed the warrant for the search – plus a list of what was taken from the property.

NPR's Carrie Johnson explains what the unsealed warrant reveals, and what comes next.

But the news from Mar-a-Lago...
Share
Mark as Played

What The Climate Package Means For A Warming Planet

August 11, 2022 • 14 min
Up until a few weeks ago, meaningful climate legislation was sidelined in the U.S. Senate. But after months of wrangling votes — and adding concessions to oil and gas companies — Democrats in the Senate have finally passed the Inflation Reduction Act.

The bill includes more than $300 billion in climate investments — the highest amount ever allocated by the federal government to tackle climate change. This episode lays out what the ...
Share
Mark as Played

From The Grassroots To The Top Of The Ticket, Election Denial Looms Large in GOP

August 10, 2022 • 14 min
In Republican politics, one of the biggest issues in the 2022 election is the 2020 election. In at least 8 states so far, Republicans have picked candidates for Secretary of State who deny the results of the last presidential election. This is despite the fact that not a shred of evidence calls President Biden's victory into question. If elected, they would become the chief elections officer in their states.

In some of the same ...
Share
Mark as Played

How The U.S. Gave Away Cutting-Edge Technology To China

August 8, 2022 • 14 min
All eyes are on Kherson. In Ukraine's first major offensive of the war, soldiers are pushing towards the city, trying to retake it from Russian troops. It's a transport hub and key river crossing, and reclaiming it would be a huge victory for Ukraine.

NPR's Kat Lonsdorf brings us the story of Vitaly, a 22-year-old college student in Kherson. Since the city first fell, he has sent NPR voice memos detailing life under the ...
Share
Mark as Played

August 6, 2022 • 18 min
Bashar Murad's danceable riffs and live concerts and videos - filled with bubbles, enormous hats, and layers and layers of veils - have earned him the nickname "Palestinian Lady Gaga" from his fans. And much like Born This Way is an anthem of equality, Murad's songs challenge conservative social norms and push for LGBTQ rights while also challenging the Israeli occupation of the West Bank.

As U.S. Declares Monkeypox A Public Health Emergency, What To Know About The Risks

And as the number of cases in the U.S. continues to climb, there's a lot of confusion about the disease, how it spreads and who's most at-risk.

He weighs in on all three in a sit-down interview with NPR.

In participating regions, you'll also hear a local news segment to help you make sense of what's going on in your commu...
Share
Mark as Played

Abortion Bans Have Consequences For Wanted Pregnancies, Too

August 3, 2022 • 13 min
Since the fall of Roe v. Wade, a dozen states have implemented laws banning or severely restricting abortion. Those laws have consequences for wanted pregnancies, too.

NPR's Carrie Feibel brings us the story of a woman in Texas whose pregnancy took a sudden turn. Because of the state's abortion law, her case became a medical crisis.

August 2, 2022 • 13 min
Ayman al-Zawahiri, the leader of Al Qaeda, was killed by a U.S. drone strike in Kabul, Afghanistan over the weekend. For years, al-Zawahiri was Osama Bin Laden's deputy — and was known as the mastermind behind the 9-11 attacks.

NPR's Greg Myre and Diaa Hadid discuss the implications of al-Zawahiri's death for the U.S., Afghanistan, and America's decades-long war on terror.

August 1, 2022 • 10 min
Dee Davis remembers watching his grandmother float by in a canoe during the 1957 flood that hit Whitesburg, Ky. The water crested at nearly 15 feet back then--a record that stood for over half a century, until it was obliterated last week.

The water was more than six feet higher than the 1957 mark when floodwater destroyed the gauge.

The flooding took out bridges and knocked houses off their foundations. It had claimed at least 35 li...
Share
Mark as Played

Being An Abortion Doula In A Post-Roe World

July 30, 2022 • 15 min
You may have never heard the phrase abortion doula, but for years they have been working to support people navigating the process and experience of ending a pregnancy.

With Roe overturned, depending on where you live, figuring out how to obtain an abortion has gotten much harder. This could make the role of abortion doulas more critical than ever --- and more risky.

NPR's Michel Martin speaks with Vicki Bloom. She refers to hers...
Share
Mark as Played

In Canada, The Pope Delivers An Apology To Indigenous Peoples

July 29, 2022 • 13 min
This week, Pope Francis has been in Canada, on what he calls a "Pilgrimage of Penance". He's been going around the country to apologize for the Catholic Church's role in Canada's residential school system.

These schools – funded by the Canadian government and administered by the Catholic Church – were aimed at erasing the culture and language of indigenous people.

The apology from Pope Francis this week comes ...
Share
Mark as Played

How To Protect Yourself From The BA.5 Omicron Subvariant

July 28, 2022 • 12 min
The BA.5 variant is the most dominant strain of COVID-19 in the country, according to the Centers for Disease Control and Prevention. It's highly transmissible and it's driving up COVID cases and hospitalizations.

This week NPR learned that the Biden administration may scrap plans to let more younger adults get second COVID-19 boosters this summer. Instead, officials are trying to speed up availability of the next generatio...
Share
Mark as Played