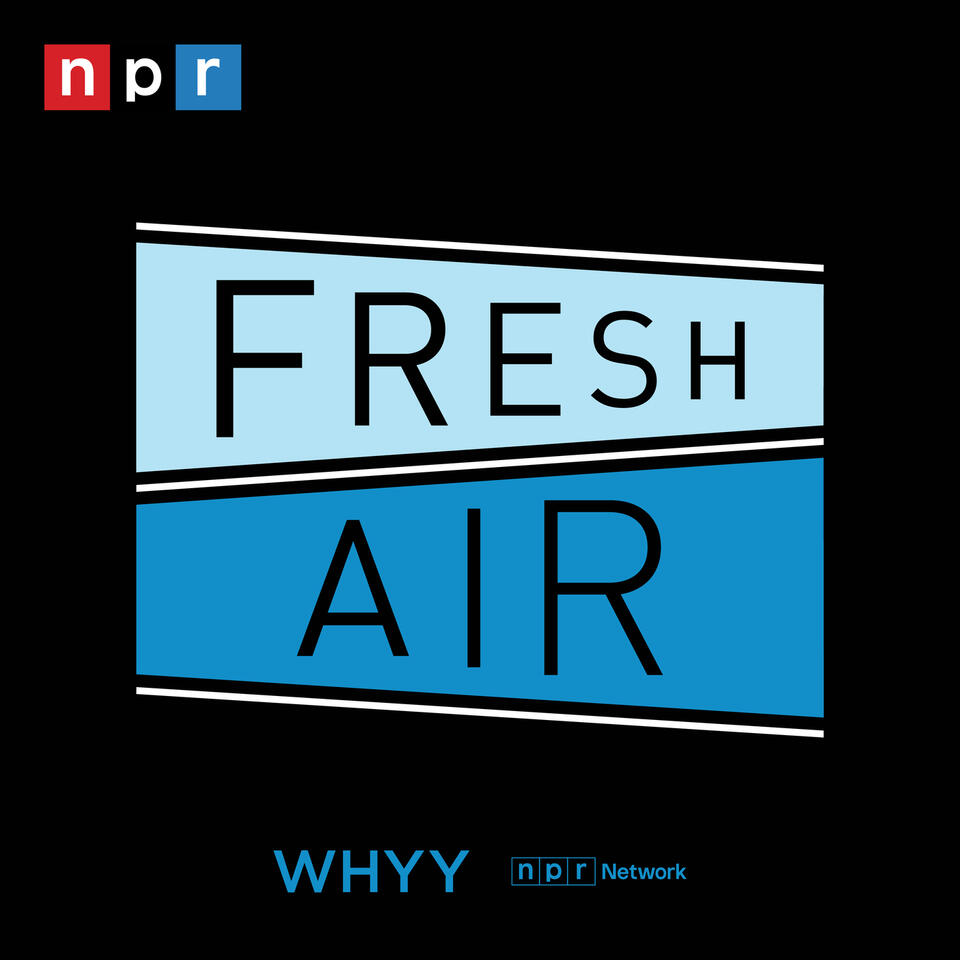 Fresh Air from WHYY, the Peabody Award-winning weekday magazine of contemporary arts and issues, is one of public radio's most popular programs. Hosted by Terry Gross, the show features intimate conversations with today's biggest luminaries. Subscribe to Fresh Air Plus! You'll be supporting the unique show you can't get enough of - and you can listen sponsor-free. Learn more at plus.npr.org/freshair

September 30, 2022 • 48 min
We remember British author Hilary Mantel who died Sept. 22. Mantel was best known for her trilogy of novels about Thomas Cromwell, the political fixer for Henry VIII. In 2012 she spoke with Terry Gross about her love of history. "Instead of thinking there was a wall between the living and the dead, I thought there was a very thin veil. It was almost as if they'd just gone into the next room."

The Dangerous Early Days Of The Space Race

September 30, 2022 • 45 min
Historian Jeff Shesol recalls the early days of the U.S. space program, when rockets often blew up in test launchings, and no one was sure John Glenn would make it through America's first orbital flight alive. In his book Mercury Rising, he describes how Soviet success in space forced a reluctant President Kennedy to embrace the program.

The Water Crisis In The American West

September 29, 2022 • 45 min
40 million people rely on water from the Colorado River, but overuse and global warming have combined to create a water emergency. Tough choices must be made soon, or farms and cities will face critical shortages. We talk with ProPublica investigative reporter Abrahm Lustgarten.
million
Jazz critic Kevin Whitehead reviews a recording by pianist Mal Waldron.
Share
Mark as Played

September 28, 2022 • 45 min
The British writer, who died Sept. 22, wrote a trilogy of critically acclaimed historical novels on the life of Thomas Cromwell, one of Henry VIII's most trusted advisors. Mantel was the first woman to win the Man Booker Prize twice. She spoke with Terry Gross in 2012.

Also, Ken Tucker reviews a new collection of unreleased demos by Lou Reed recorded when he was a fledgling singer songwriter, before he led the Velvet Underground...
Share
Mark as Played

September 27, 2022 • 44 min
In her new book, By Hands Now Known, civil rights lawyer and professor Margaret Burnham reports on little-known cases of racial violence in the Jim Crow era, including crimes that went unreported and murderers who were never punished. Over 15 years, the project's researchers have chronicled roughly 1,000 murders.

September 26, 2022 • 44 min
Writer John Vercher trained in mixed martial arts as a young man. His novel, After the Lights Go Out, centers on a veteran MMA fighter who is experiencing memory loss, severe mood swings and tinnitus. The book is also about the fighter's biracial identity.

Best Of: 'Reservation Dogs' Showrunner / The Mosquito Bowl Of WWII

September 23, 2022 • 48 min
The FX/Hulu series Reservation Dogs follows four teens on an Oklahoma Indian reservation who are frustrated and alienated, caught between what's left of traditional Native culture on the reservation and the broader pop culture. We talk with co-creator and showrunner Sterlin Harjo about his own upbringing in Indian Territory and how he was inspired by the storytellers in his family.

Inside The Weird World Of Animal Crimes

September 23, 2022 • 46 min
Science writer Mary Roach (Stiff, Gulp) explores scenarios where animals are the ones committing "crimes" — and how society deals with it. We talk about bear attacks, drunk elephants, and monkey thieves. Her book is Fuzz: When Nature Breaks the Law.

How Climate Change Supercharged The Weather

September 22, 2022 • 44 min
Washington Post reporter Brady Dennis warns our aging infrastructure systems weren't built to withstand the stresses of climate change: "There is a certain amount of suffering that we can't avoid."
Share
Mark as Played

September 21, 2022 • 45 min
Edward Enninful grew up in Ghana, assisting his seamstress mother in her dressmaking shop. "For me, fashion was always such an inclusive, beautiful thing," he says. We talk about making the fashion industry more diverse, the famous "all Black" issue of Vogue Italia, and modeling as a teen. Enninful's memoir is A Visible Man.

How Trump's DOJ Pressured The SDNY To Aid The White House

September 20, 2022 • 44 min
Geoffrey Berman served as U.S. Attorney in the Southern District of New York. In his memoir, Holding the Line, he describes how the Dept. of Justice demanded he use his office to aid the Trump administration. "The Department of Justice has to remain independent of politics," Berman says. "It's supposed to be unbiased. And what happened was President Trump treated the Department of Justice like his own personal law f...
Share
Mark as Played

September 19, 2022 • 45 min
The FX/Hulu series Reservation Dogs follows four teens on an Oklahoma Indian reservation who are frustrated and alienated, caught between what's left of traditional Native culture on the reservation and the broader pop culture. We talk with co-creator and showrunner Sterlin Harjo about his own upbringing in Indian Territory and how he was inspired by the storytellers in his family.
Share
Mark as Played

Sheryl Lee Ralph just won her first Emmy for role as a no nonsense kindergarten teacher in the ABC sitcom Abbott Elementary. Sidney Poitier gave Ralph her first screen role in his 1977 film A Piece of the Action. At t...
Share
Mark as Played

Kevin Whitehead remembers jazz pianist Ramsey Lewis, who had the 1965 crossover hit "The In Crowd."

Buzz Bissinger On 'The Mosquito Bowl'

September 15, 2022 • 45 min
Friday Night Lights author Buzz Bissinger tells the story of Marines in 1945 who, while waiting for the Battle of Okinawa to begin, staged a football game broadcast on Armed Services Radio throughout the Pacific. Bissinger's book is The Mosquito Bowl: A Game of Life and Death in World War II.

Nina Totenberg On Her Friendship with RBG

September 14, 2022 • 46 min
The NPR legal affairs correspondent met the future SCOTUS justice in the early '70s, when Totenberg interviewed Ruth Bader Ginsburg for a story about a decision pertaining to women's rights. Her memoir about her life and friendship is Dinners with Ruth.

How One Law Firm Influenced The Trump Administration

September 13, 2022 • 44 min
Servants of the Damned author David Enrich says lawyers for the firm of Jones Day were deeply embedded in the Trump White House — and helped create policy designed to limit the federal government.
Share
Mark as Played

September 12, 2022 • 46 min
Sheryl Lee Ralph is Emmy-nominated for her role as the veteran teacher Barbara Howard on the hit ABC sitcom Abbott Elementary, about an under resourced Philly school. We talk about her long career in showbiz — from Dreamgirls on Broadway to Moesha, and how she made her own way in an industry that didn't offer many parts to Black women.
Share
Mark as Played

September 9, 2022 • 38 min
Tennis legend John McEnroe talks about his career, his outbursts on the court, and his new job as a TV tennis analyst and voice-over artist on the hit Netflix Series, Never Have I Ever. McEnroe is the subject of a new Showtime documentary.

Also, songwriter and singer Amanda Shires performs a few songs and talks about her life. Her latest album, Take it Like a Man, has songs about a rocky period in her marriage to singer songwriter ...
Share
Mark as Played

September 9, 2022 • 43 min
NPR international correspondent Anne Garrels died Wednesday at 71. She was known for fearless reporting in conflict zones, empathy for the victims of war, and a host of prestigious awards. We'll hear about her experiences in Iraq in 2003, chronicled in her book, Naked in Baghdad.