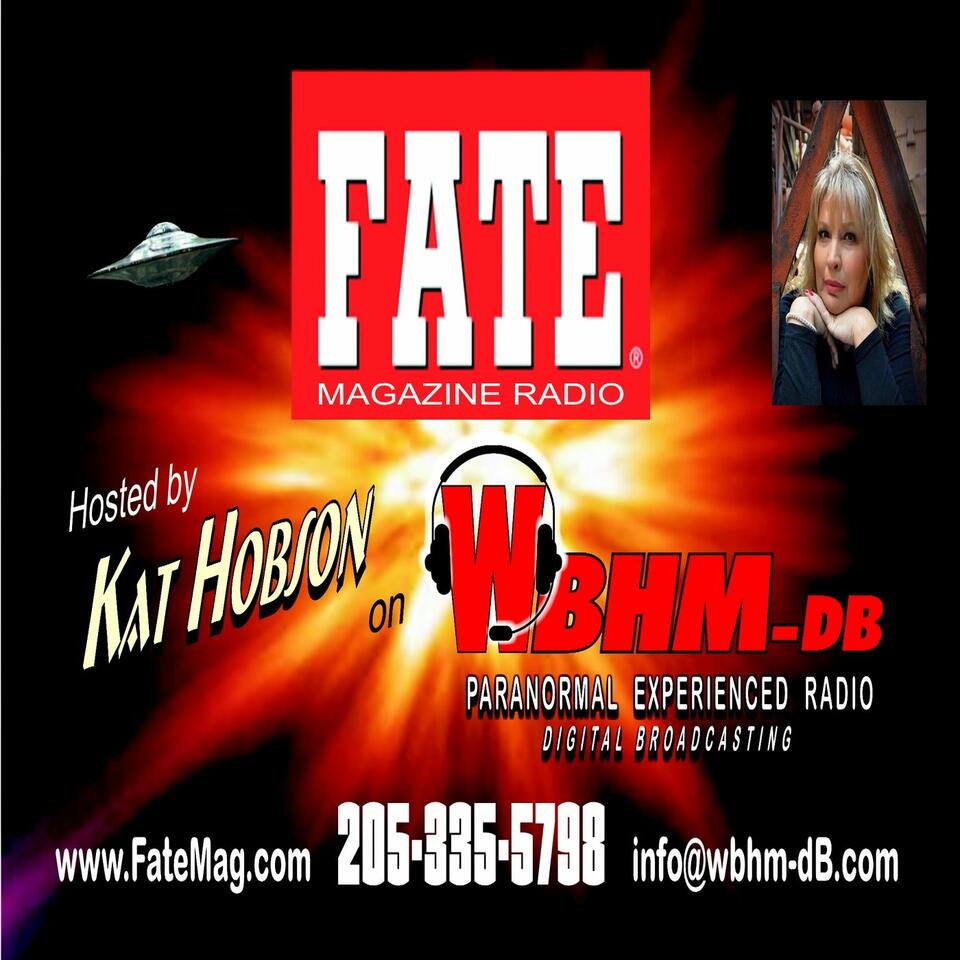 FATE Mag Radio is the online voice of FATE Magazine, a U.S. magazine about paranormal phenomena. FATE was co-founded in 1948 by Raymond A. Palmer (editor of Amazing Stories) and Curtis Fuller. FATE magazine is the longest-running magazine devoted to the paranormal. Promoted as “the world’s leading magazine of the paranormal”, it has published expert opinions and personal experiences relating to UFOs, psychic abilities, ghosts and hauntings, cryptozoology, alternative medicine, divination methods, belief in the survival of personality after death, Fortean phenomena, predictive dreams, mental telepathy, archaeology, warnings of death, and other paranormal topics. FATE Mag Radio brings these subjects into the realm of broadcast radio with interviews by Kat Hobson

February 6, 2023 • 122 min
Constance Victoria Briggs is a metaphysical, spiritual & cosmic researcher & writer. She has released her 5th book, The Moon's Galactic History, A Look at the Moon's Extraterrestrial History & It's Connection to Earth. I enjoy her, her outlook on life in general, her knowledge & her work.
Mark as Played

January 30, 2023 • 124 min
Jay Bachochin is someone who is definitely "Hunting The Truth". He has two documentaries out, Finding Jay & Beyond The Kettle: Finding Jay 2. Both are excellent & I personally got them on Amazon Prime. I KNOW you're going to enjoy this show!
Mark as Played

January 16, 2023 • 122 min
Preston Dennett is a UFO investigator, a Ghost Hunter, an Out-of-Body explorer and a great author. Dolly Safran is a UFO experiencer who was first aware of being taken at the age of fourteen. She has since worked with them, learned from them and when asked what she wanted to learn her choice was to pilot the craft. A deal was reached. Preston's book, Symmetry: A True UFO Adventure is the true story of Dolly's lifelong adven...
Mark as Played

January 9, 2023 • 122 min
Janice Carlson authored over a dozen novels & novellas under her fiction-writing pen name Ashland Price. The her life changed. In 1992 Janice accidentally discovered she could communicate with the dead. Since then she has done thousands of afterlife communications for clients with their loved ones. To date Janice is the only person I know doing this who has a money back guarantee of contact. Her book, Soul Sensing: How to Commu...
Mark as Played

January 2, 2023 • 131 min
Happy New Year! Tonight's Holiday episode is with Michelle Freed! Michelle is the Producer of The Midnight Society Talk Show, the founder & hypnotherapist of Butterfly Effect Center, was producer of Midnight in the Desert. She is a brilliant remote viewer & clairvoyant. I admire her greatly & feel that you will enjoy this show!
Mark as Played

December 19, 2022 • 121 min
Dennis Stone is the owner of what is one of the most unique sites, and maybe even the oldest, in North America. Named America's Stonehenge, it has been featured on many programs looking for answers to its history.
Mark as Played

December 12, 2022 • 121 min
Tonight's rebroadcast of Rev. Michael J.S. Carter's show is one of my favorites. He is a great author, has appeared on Ancient Aliens & Steven Spielberg's Sci-Fi Channel's production Alien Abduction: The Real 4400. His books included Alien Scriptures: Extraterrestrials in the Holy Bible, A New World If You Can Take It & several other titles, all excellent.
Mark as Played

November 28, 2022 • 133 min
I had scheduled this rebroadcast with Linda Godfrey to run while traveling tonigt. Now I'm so glad I did. When I learned of her passsing I almost pulled it & ran something else. I decided to stay with my original plan. I can't think of any better tribute to her memory than to share with others how wonderful & knowledgeable she was. I hope you enjoy this show. I know I did.

God speed Linda. I know you have all your ...
Mark as Played

November 21, 2022 • 115 min
We are discussing Steven's wonderful books The Lost Technologies of the Great Pyramid & The Great Pyramid Prosperity Machine as well as his Pump Foundation. This is great stuff!
Mark as Played

October 24, 2022 • 101 min
Jacques studied mathematics at the Sorbonne, earned a Master’s degree in astrophysics at the University of Lille and was recruited to the first French team that tracked early artificial satellites at Paris Observatory.

Moving to the US in 1962, he pursued his passion for science working on NASA projects at the University of Texas in Austin (notably, coding the first computer-based map of Mars) before joining Northwestern University ...
Mark as Played

October 9, 2022 • 130 min
Artur Tadevosyan was a brilliant guest. I hope you enjoy this rebroadcast as muich as we enjoyed creating it!
Mark as Played

September 25, 2022 • 122 min
Robert Lyndsy Milne is brilliant. He is a Life Coach, a psychic-intuitive counselor, a teacher, a healer and a friend. He uses his gifts to help others. We will discuss his work in helping heal a coma patient and also his work featured in the book "The Perfect Predator" sharing how he helped cure a deadly superbug.
Mark as Played

September 18, 2022 • 123 min
I am so glad to be able to bring this great show with Jay Bachochin, producer of Finding Jay, The Bray Road Beast at Small Town Monsters. He has now added Beyond the Kettle, Finding Jay 2. You can also enjoy his work, Hunting the Truth. Enjoy this great rebroadcast!
Mark as Played

September 11, 2022 • 116 min
L.A. Marzulli is an author, lecturer & documentary filmmaker on the subject of the Nephilim. He has written over a dozen books in his quest to learn the truth about these giants from Biblical times. The Watchers is a documentary film series as well as The Watchman Chronicles. He has a new series, On the Trail of the Nephilim with more photos & interviews.
Mark as Played

September 4, 2022 • 194 min
This rebroadcast with Thomas Fusco is excellent. I hope you enjoy it!
Mark as Played