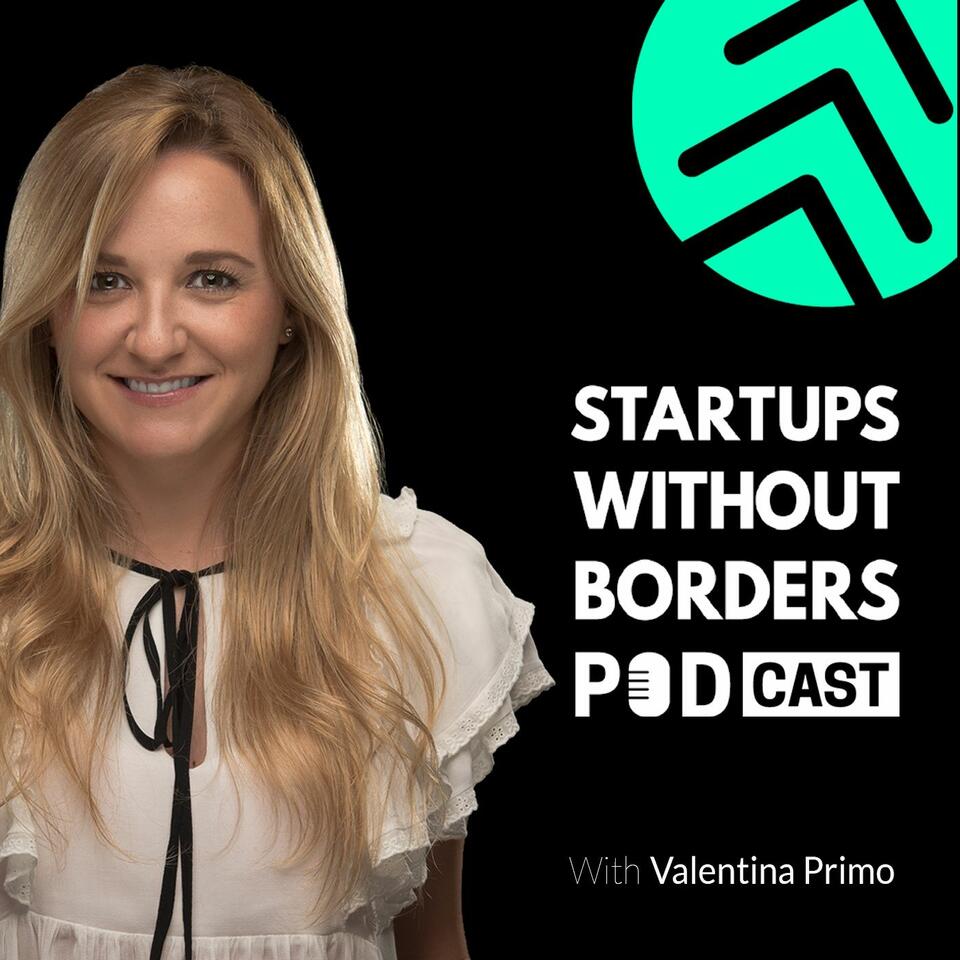 The Startups Without Borders Podcast is a business interview show that uncovers the unspoken lessons of some of the world’s most audacious risk-takers: migrant entrepreneurs. Each week, we will dig into the different aspects and mindset behind building a startup, as told by industry leaders, brave change makers and bold disruptors with one thing in common: they are refugees and migrants. From the Middle East, to Europe and beyond, the show will focus on concrete, tangible strategies and tactics for entrepreneurs, from productivity tips, to business hacks, to industry insights, as told through the inspiring journey of entrepreneurs on the move. The show is hosted by Valentina Primo, an Argentine journalist and the founder of Startups Without Borders, who spent 6 years in Egypt interviewing startup founders across the Middle East, and fell in love with the relentless, unstoppable spirit of its entrepreneurs. Valentina previously launched Startup Scene Middle East, Egypt’s largest English-language publication on the entrepreneurial landscape, and has covered stories for international outlets, including BBC Business. Photo Credit: Ahmed Najeeb. Music: Funky Music ( Vlog Music ) by Dj Quads https://soundcloud.com/aka-dj-quads Music promoted by Audio Library https://youtu.be/7y1mi7ggtt0

30. What You Need To Know About Hiring Refugees in Tech Companies

August 15, 2021 • 39 min
In episode 30 of the Startups Without Borders Podcast, we team up with RefugeeForce to talk about a new reality reshaping the workplace across Europe: Hiring talented Refugees to Fill the skills Gap in workplaces.

In this candid conversation, we speak to to RefugeeForce co-founder Gaspar Rodríguez, and Salesforce graduate and Azmi Wahab, about this new promising landscape.

From the Salesforce Economy, to the legalities of hiring re...
Share
Mark as Played

29. 7 Things Every Entrepreneur Should Know Before Starting Up in the Middle East

July 13, 2021 • 34 min
Anas Alchalabi or “That Entrepreneurship guy” as he’s known in the streets of the Middle East, has enabled hundreds of Refugee founders to create Small Empires (Tech Startups) that solves major challenges in Industries like Finance, Education, Healthcare, Manufacturing, and Retail.

For the past 4 years, Anas has contributed to initiatives with Governments, UN, World Bank, Venture Capitalists, Google, Facebook, and many more to brin...
Share
Mark as Played

28. This is What I Learned Acting as a VC for One Year

June 8, 2021 • 34 min
This episode is sponsored by Mailerlite, an email marketing tool where you can easily build lead-generation landing pages. Go to https://www.mailerlite.com/a/d9fgzvnqnm to create a free account and receive all premium features for an entire month.

Yama Saraj is an entrepreneur and a "social hacktivist" as he calls himself. He was born in Kabul Afghanistan, raised in Eindhoven, the Netherlands, and is now based in Paris wher...
Share
Mark as Played

27. 5 Things You Should Know About Starting a Business in Europe as an Immigrant

May 17, 2021 • 28 min
This episode is sponsored by Mailerlite, an email marketing tool where you can easily build lead-generation landing pages. Go to https://www.mailerlite.com/a/d9fgzvnqnm to create a free account and receive all premium features for an entire month.

Irma Rodriguez had a great job in Mexico, working for one of the biggest banks for medium and large corporations. But at some point, the situation in her home country became too much of a...
Share
Mark as Played

26. How I Turned the Pandemic into an Opportunity to Reinvent My Business, with Randa Bennett

April 19, 2021 • 25 min
This episode is sponsored by Mailerlite, an email marketing tool where you can easily build lead-generation landing pages. Go to https://www.mailerlite.com/a/d9fgzvnqnm to create a free account and receive all premium features for an entire month.

Today, we speak to Randa Bennett, a London-based tech founder and CEO of V-Loop, who recently launched her podcast, An Immigrant Girl.
Having immigrated to the UK in the late 1990s, Randa...
Share
Mark as Played

25. How to Succeed When Everything Seems to be Against You, with Majd Mashrawi

April 7, 2021 • 26 min
This episode is sponsored by Mailerlite, an email marketing tool where you can easily build lead-generation landing pages. Go to https://www.mailerlite.com/a/d9fgzvnqnm to create a free account and receive all premium features for an entire month.

Majd Mashharawi is one of the fiercest, most relentless women you’ll ever meet. Having grown up in war-torn Gaza, Majd came up with an incredible idea: to rebuild damaged buildings using ...
Share
Mark as Played

24: Making it as a Digital Nomad: How to Create Revenue Streams that Generate Passive Income

March 22, 2021 • 34 min
This episode is sponsored by Mailerlite, an email marketing tool where you can easily build lead-generation landing pages. Go to https://www.mailerlite.com/a/d9fgzvnqnm to create a free account and receive all premium features for an entire month.

Today, we speak to Francisco Ortiz, a Digital Nomad who has taken on the mission of teaching thousands of people how to become financially free.

23. 5 Things You Should Know Before Pitching to a VC, with Nora Bavey

March 8, 2021 • 29 min
This episode is sponsored by Mailerlite, an email marketing tool where you can easily build lead-generation landing pages. Go to https://www.mailerlite.com/a/d9fgzvnqnm to create a free account and receive all premium features for an entire month.

In this episode, we speak to a tech wonderwoman democratizing capital in the Nordics: Nora Bavey. Nora is an award-winning entrepreneur, and the General Partner at Unconventional Ventures...
Share
Mark as Played

22. Can We Map the Refugee and Migrant Startup Ecosystem?

February 22, 2021 • 31 min
From London, to Amman, to the Greek refugee camps, There is a growing ecosystem of entrepreneurs, incubators, supporters and investors building a movement made up of valiant migrant entrepreneurs. What does that transnational ecosystem look like today?

Join us in this exciting panel from our last Startups Without Borders Summit, where key players in the refugee and migrant startup world share their insights. Meet Charlie Fraser: co...
Share
Mark as Played

21. How to Turn Being Overlooked into Your Biggest Asset, with Lauren Maillian

February 8, 2021 • 24 min
If there is one word that dominated the media landscape this past year, it’s diversity. The Black Lives Matter movement brought to light a whopping disparity in startup funding: Black women have received only 0.06% of all Venture Funding since 2009.

In this power-packed fireside chat, we meet the powerhouse woman leading a movement to change that: Lauren Maillian, CEO of Digital Undivided.

Join us in this intimate conversation, to...
Share
Mark as Played

January 25, 2021 • 31 min
It’s a well known statistical fact that immigrants are over-represented among entrepreneurs; in fact, 55% of one-billion dollar startups were founded by at least one immigrant. How can the investment sector tap into this opportunity, as the number of refugees is projected to dramatically increase? Don’t miss this insightful debate.

In another Episode of our Talks Revisited, where we share the most thought-provoking panels held at t...
Share
Mark as Played

19. Cutting Through the Noise: Getting People to Use your Product

January 11, 2021 • 38 min
I’m super excited to present another panel from the Startups Without Borders Summit, with two entrepreneurs and media powerhouses from Egypt and England: Anthony Rose, and Amy Mowafi.

Anthony Rose, “the man who saved the BBC” sits down with Egyptian media mogul Amy Mowafi to crack the code behind making a company stand out. Anthony is a technical and product visionary who founded
SeedLegals, a legaltech platform that lets startups ...
Share
Mark as Played

18. Mastering Media Relations When the World is Not Paying Attention

December 28, 2020 • 23 min
How to get people to listen when the whole world is entering panic mode? As we dive into a Brave New World where everyone is constantly bombarded by messages online, getting your story across is one of the hardest challenges.

To answer this question, we’re bringing you one of the top panels at the Startups Without Borders Summit, with two powerhouse female entrepreneurs: Maha Abuelenein and Dina Mofty.

In this super fireside, Dina E...
Share
Mark as Played

17. Be Online or Be Invisible: Tips to Build a Leading Website, with GoDaddy

December 14, 2020 • 32 min
How are top websites dominating the new normal? As we just concluded the Startups Without Borders Summit in Amsterdam, Cairo and San Francisco, I’m very happy to announce the first of our Talks Revisited.

In this episode, Selina Bieber, GoDaddy’s Senior Regional Director for Turkey, MENA and South Africa, digs into the behind the scenes of what makes a leading website.

This year, as the Covi19 pandemic shook the entire world and led...
Share
Mark as Played

16. How this “Invisible Man” Created a Blockchain Startup in a Refugee Camp

December 2, 2020 • 54 min
This is a very special interview. Tey Al Rjula’s story is one for the movies. Having spent two years in a refugee camp in the Netherlands, Tey used that time to do an online masters in Blockchain, and then created Tykn, a startup that offers stateless people a virtual form of ID, using blockchain.

Brace yourselves for an intense interview, as Tey delves into his story in detail, narrating how he came up with a world-shaking startup...
Share
Mark as Played

15. How to Teach Yourself Anything and Become Your Best Self, with Alaa Alnuaimi

November 19, 2020 • 30 min
Today, we speak to Alaa Alnuaimi, an Iraqi entrepreneur who moved to Turkey following the war and managed to build a massive design studio that garnered international giants as clients, such as Nike, Pizza Hut, and KFC.

In this episode, Alaa recalls his journey across Egypt, Syria and then Turkey, to find a place to call home, while striving to pursue his own passion for design. In this candid conversation, we speak about how to fo...
Share
Mark as Played

14. Why Diversity is Important in a Startup Ecosystem?

January 27, 2020 • 37 min
If you’ve been on our site, you’ve probably seen this figure, but it’s worth repeating over and over again: the lack of diversity is costing the tech industry a missed opportunity worth almost $400 billion dollars.

But what if we started looking at migration as an opportunity? What if we leveraged on this diversity to build more innovative startups, that can build different solutions to problems we’re not even seeing?

13. What is the Real Story? When Refugees Internalize an External Narrative

January 20, 2020 • 20 min
You know I love storytelling. So when I heard about a project called ‘Telling the Real Story,’ I was immediately drawn. The project, which was facilitated by UNHCR, landed to the Startups Without Borders Summit last November 8 and 9, and I couldn’t be more thrilled to be speaking to one of its members, Amal Jibril.

A Passionate about humanitarian issues and technology, Amal has been tirelessly working to provide refugees living in ...
Share
Mark as Played

12. Why Refugee-lens Investing is the next Impact Frontier

January 13, 2020 • 42 min
Have you ever heard of impact investment? Well, I think everyone should. That’s why we teamed up with UNDP’s Innovation Lab to bring to topic to the forefront of the agenda at the Startups Without Borders Summit. We gathered some of the most impactful investors and entrepreneurs across the Middle East and North America, to discuss impact investment and the new frontier in the investment landscape: refugee-lens investing.

11. How to Build a Strong Community - and Monetize it, with Reem Sabouni

January 6, 2020 • 21 min
Our incredible partners at Facebook joined the Startups Without Borders Summit to support the migrant and refugee entrepreneurs building vibrant communities in the Middle East. Now, gear up to meet an incredible bosslady and Syrian entrepreneur Reem Sabouni, whose startup Arab Mom’s Club, has build a massive community for mothers in Egypt, starting off with a Facebook page.

In this episode, we dive into Reem’s journey growing a com...
Share
Mark as Played