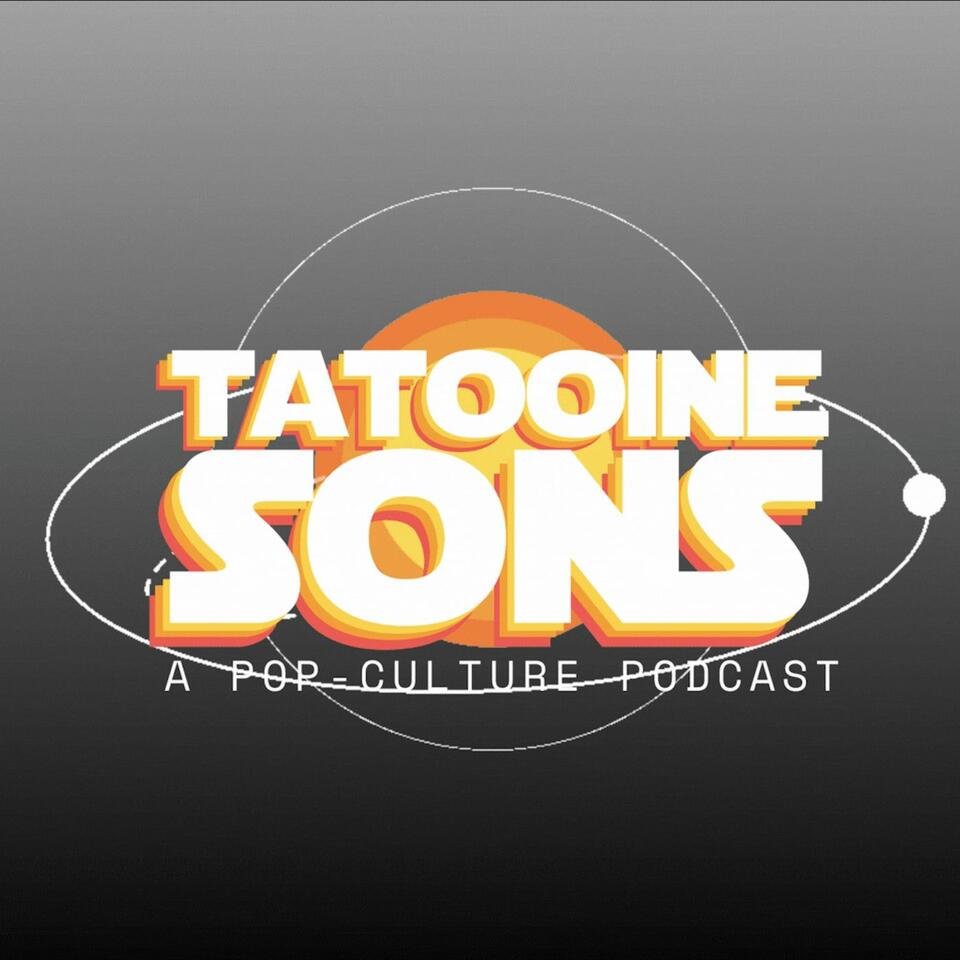 #2 ON SCREEN RANT'S LIST OF "10 BEST STAR WARS PODCASTS FOR FANS, RANKED!" "Although it doesn't focus on Star Wars exclusively, discussion about the Star Wars universe still makes up a large portion of the content in this podcast. Despite dipping their toes into the MCU, DC, etc. the Star Wars content in no way takes a backseat and is just as in-depth and detailed as any Star Wars exclusive content out there...This is a great podcast for those who are interested in Star Wars but still like to have a break to talk about their other favorite movie franchises as well." - Matthew Flores, ScreeRant.com Tatooine Sons is a positive, family-friendly podcast hosted by David Jesse and his two teenage sons, Sam (20) and Nathan (16). We believe that pop-culture is the mythology of this generation. There is a story written on our souls. These myths speak to that story. Star Wars | MCU | DC | Comicbooks | LOTR | Cobra Kai Tatooine Sons was launched in December 2017 at "Tatooine Sons: A Star Wars Podcast." In December of 2018, Nathan (one of the hosts who at the time was 12 years old) asked Rian Johnson, the writer/director of "The Last Jedi": "What is the name of the porg on the Millennium Falcon?" Rian Johnson responded: "What do YOU think his name is?" When Nathan answered, "Maybe Terbus?" no one really believed the character would become official. But after a year and a half #MakeTerbusCanon campaign on social media, the character was officially named in the all-ages comic book series "Star Wars Adventures," issues 27-29. (https://starwars.fandom.com/wiki/Terbus) Tatooine Sons is hosted by David (the dad) , Samuel (20 years old) and Nathan (16 years old). We love how pop-culture helps us see that there is something bigger in the world. We discuss Star Wars, the MCU, DC, comicbooks, the Lord of the Rings, Narnia, Cobra Kai and pretty much anything else pop-culture related through the lens of modern mythology and the "greater story" we believe this mythology points toward.

Star Wars Visions: TO-B1 Spoiler Review | What If Thor Were an Only Child | Venom Let There Be Carnage Preview

- It’s safe to say that Star Wars Visions has been very well received by both critics and audiences since its release earlier this week. We’re continuing our look at this groundbreaking anime series with the cutest of all the shorts, TO-B1. If you’re not paying attention closely, you might miss how much it feels like The Empire Strikes Back...

- What If...Thor Were an Only Child certainly had a very differ...
Share
Mark as Played

September 22, 2021 • 28 min
The Ninth Jedi is one of the most exciting and compelling Star Wars stories in years, and it's only just over 20 minutes long. Join Tatooine Sons as we give our SPOILER reaction to what we believe is the best episode of Star Wars Visions.


THIS is Tatooine Sons!

In this SPECIAL EPISODE we're giving our NON SPOILER REVIEW of the series, along with a special interview with James Waugh, Vice President, Franchise Content (Story, Franchise Animation) & Strategy at Lucasfilm and Executive Producer of Star Wars Visions, and Kanako Shirasaki, Head of Production at Qubic Pictures and Producer of Star Wars Visions.

- Marvel's "What If...?" really likes killing off Tony Stark! We discuss that and more in our breakdown of "What If... Killmonger Rescued Tony Stark?"

- Disney+ and Marvel Studios gave us an early Christmas gift with the release of the first trailer for Hawkeye! This series looks like it's going in a VERY different direction that we originally thought. We'll talk Hawkeye, Ka...
Share
Mark as Played

The Matrix Resurrections trailer is FINALLY out and it's MINDBENDING! David has been waiting to really talk The Matrix with Sam and Nate for basically their whole lives. Let's just say, they weren't prepared for how deep he's gone down the rabbit whole. Check out their detailed conversation about all of the callbacks to the original three Matrix movies (The Matrix; The Matrix: Reloaded: Th...
Share
Mark as Played

Shang Chi and the Legend of the Ten Rings is out in theaters! We share our biggest surprises, how we think Shang Chi will impact Phase 4 of the MCU, and don't forget about those TWO End Credit Scenes!

We introduce a new segment called "Bad News" where we have a little fun with 3 of the most "clickbait" headlines of the week in Star Wars, Marvel and DC.

We're geeking out about the teaser trailer for Spiderman: No Way Home (and Dad is still on the Mephisto bandwagon!)

Was anyone else ready for the complete decimation of our Phase 1 Avengers in this week's "What If... The World Lost Its Mightiest Heroes?" (And yes, we'll talk about the exploding Hulk!)

The appearance of Luke Skywalker in the Season 2 finale of The Mandalorian left grown m...
Share
Mark as Played

- Seeing T'Challa become a Star Lord was weird, but NOT as weird as seeing good-guy Thanos!
- Star Wars Visions trailer has got us HYPED for the series! We've got the cast list and episode descriptions!
- Our thoughts on Free Guy, PLUS everything you need to know about this week's theater releases including Reminiscence and Protege (in classic Tatooine Sons style)!

It's TIME for Tatooine Sons...
Share
Mark as Played

August 13, 2021 • 76 min
DISCLAIMER: The opinions presented by one of the hosts about the writing of the first episode of #WhatIf do not necessarily reflect those of the other hosts, this show, or anyone else associated wit the show. They are NOT in violation of our "Disney shill" contract. :)

This week on Tatooine Sons:
- We discuss the conclusion of Season 1 of The Bad Batch, and an overall critique of the first season and where the show goes from ...
Share
Mark as Played

- We FINALLY Start to Learn About Operation: War Mantle
- A Preview of Marvel Studios: What If? (And the crazy connection to the Bible and Ancient Jewish Mythology!)
- Batman: The Long Halloween - What are the differences between the Comic Book and the Movie?

Plus an apology from Dad for his Dark Side behavior.

Check out our NEW Shirts on TeePublic! (100% of the profits go to help child...
Share
Mark as Played

- Has The Bad Batch lost its mojo? What's the purpose of the show and where is it really headed?
- Marvel Studios gave us a great behind the scenes look at Loki!
- The Batman Who Laughs gets even darker (how is that possible?)

Check out our NEW Shirts on TeePublic! (100% of the profits go to help children in poverty through OneChild): https://go.tatooinesons.com/merch

Rate and Review the Sh...
Share
Mark as Played

And Dad will try to do the show without having a breakdown about that scary scene with Miss Minutes.

Check out our NEW Shirts on TeePublic! (...
Share
Mark as Played

Black WIdow Spoiler Reaction! PLUS Loki and The Bad Batch

PLUS: We discuss the EASTER EGG HEAVY latest episode of Loki, and the SURPRISE CAMEO from The Bad Batch!


It's TIME for Tatooine Sons!

Check out our NEW Shirts on TeePublic! (100% of the profits go to help children in poverty through OneChild): https://go.tatooinesons.com/merch

Rate and Review the Show on Podchaser and we'll make a donation to OneChild i...
Share
Mark as Played

July 2, 2021 • 67 min
The Bad Batch is off on a side quest while Omega does the REALY work back on Ord Mantel! Meanwhile, Loki is in Hel (but a lot more happened before that). And BB-N8 is BACK to give us a full breakdown of the new animated film, "Batman: The Long Halloween Part 1!" (Spoiler alert: it's GOOD!)

Check out our NEW Shirts on TeePublic! (100% of the profits go to help children in poverty through O...
Share
Mark as Played

June 25, 2021 • 58 min
This is a weird episode! We're one host short, as BB-N8 is recovering from oral surgery (he's doing great). That doesn't stop Samuel the Hutt and Dad from breaking down all of the crazy information revealed in this week's episode of The Bad Batch! Then we speculate irresponsibly about Loki (Dad has a theory he's SURE is correct)! Join in all the fun and conversation!

June 18, 2021 • 77 min
Everyone sorta expected Crosshair to come to Bracca. Many even thought The Bad Batch would still be there when he arrived. But nobody expected THAT GUY to drop by at the end! What's going to happen now to Omega? And what does this mean for the rest of the season?

June 11, 2021 • 68 min
Well, the time has come. Loki has dropped on DIsney+ and as we always do, we’re going to breakdown and discuss some of the interesting parts of this week’s episode.

The Bad Batch has had a TON of easter eggs and callbacks to other Star Wars stories. But “Battle Scars” took that to a completely different level. Did you catch the deep dive into Black Spire Outpost from Galaxy’s Edge? Episode 7 felt like a fitting wrap up of the i...
Share
Mark as Played

June 4, 2021 • 61 min
We didn't expect to see THOSE characters in this episode, but they were still a lot of fun! (And who was it they were talking to at the end?) We give our reaction to Episode 6 of "The Bad Batch!"

Sam gives you everything you need to know about Loki before it releases next week. And Nate catches us up on the Netflix phenomenon, Sweet Tooth!

Check out our NEW Shir...
Share
Mark as Played

Join BB-N8, Samuel the Hutt, and Dad as they give their reactions to the latest episode of The Bad Batch appropriately titled, "Rampage!"

PLUS:
Sam breaks down the new trailer for The Eternals!
BB-N8 shares why you should be excited about the Inju...
Share
Mark as Played

May 21, 2021 • 74 min
If you joined us Thursday evening for The Bad Batch Pregame with Around the Galaxy on Twitter Spaces, you weren’t surprised at all about most of the developments in “Cornered.” Our amazing Twitter family predicted a supply run, the appearance of Fennec Shand, and even Hunter’s little ride on a speeder bike. But what does all of this mean? Here's a hint... A LOT!

PLUS:
Samuel the Hutt helps us prepare for "The Eternals!"
B...
Share
Mark as Played