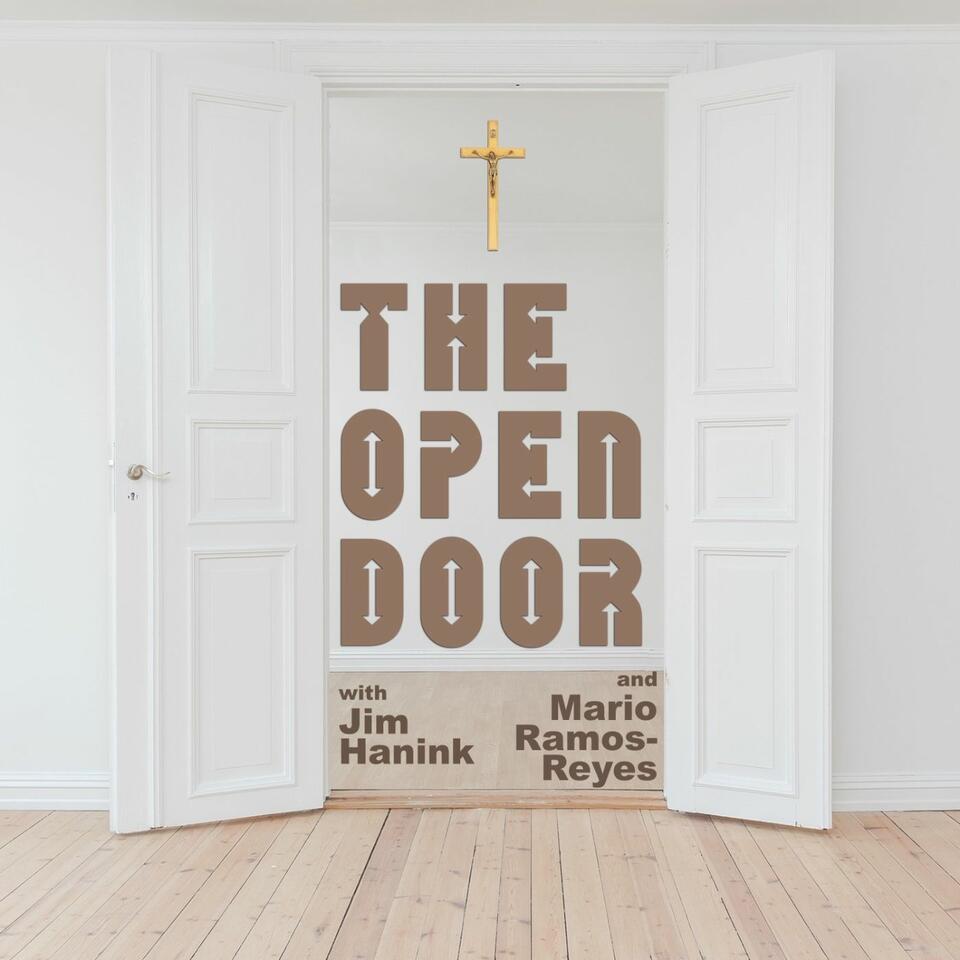 The Open Door with Dr. Jim Hanink and Friends Some history of the show: The Open Door, the longest running of the WCAT Radio shows, was established in October, 2016, by Lt. Colonel Albert E. Hughes (USAF Retired) holds an MS in Systems Management (with distinction) from the Air Force Institute of Technology, an MM in Pastoral Ministry from Seattle University (Jesuit). He is certified in Spiritual Direction by the Monastery of the Risen Christ in San Luis Obispo, CA. He is an accomplished retreat master and Catholic evangelist. A convert at mid-life from agnostic rationalism, he has taught scripture and conducted period retreats in parishes in Seattle, WA, Santa Maria, CA, and Corpus Christi, TX, for 25 years. Following Al's departure from the program, Jim Hanink and Matthew Bartko became the show hosts and continue the dialogue.

November 19, 2021 • 68 min
Welcome to The Open Door! (November 17th) Today we discuss theology, bioethics, and evangelizing the culture. We’ll also explore how it can be necessary to challenge one’s academic alma mater. Our welcome guest is Samantha Stephenson. She holds three degrees from Loyola Marymount University (Los Angeles). She has hosted the podcast Brave New Us: Bioethics in the Light of the Catholic Faith and blogs at Mama Prays. Her book, Reclaim...
Share
Mark as Played

Episode 221: Teaching, Writing, and the Evangelization of Culture with Patrick Tomassi (November 10, 2021)

November 10, 2021 • 67 min
This week on The Open Door, panelists Jim Hanink, Mario Ramos-Reyes, and Christopher Zehnder discuss teaching, writing, and the evangelization of culture. Our welcome and returning guest is Patrick Tomassi. He teaches junior high and high school math and science at Trinity Academy in Portland, Oregon. He even takes students backpacking around the Pacific Northwest! Tomassi’s work has appeared in Public Discourse, America, and Ploug...
Share
Mark as Played

October 27, 2021 • 80 min
In this episode of The Open Door, panelists Jim Hanink, Mario Ramos-Reyes, and Christopher Zehnder discuss political philosophy. We’ll introduce the work of the late John Rawls and offer a critical examination of his legacy. Their special and welcome guest is Christopher Wolfe. Prof. Wolfe is Distinguished Research Scholar at the University of Dallas and Emeritus Professor at Marquette University. He is the author of The Rise of Mo...
Share
Mark as Played

September 28, 2021 • 64 min
This week on The Open Door we discuss a young missionary order, seminary education, and
spiritual theology. Plus, we do so with a shared foundation in metaphysics. Our welcome and
special guest is Fr. Charles Carpenter, M.A.P. Fr. Carpenter hails from Hawthorne, California,
and this Christmas was the first he’s celebrated in the United States in 50 years! He has a
doctorate from Rome’s Gregorian University. He celebrates both the joys ...
Share
Mark as Played

September 19, 2021 • 67 min
Welcome to The Open Door! Jim Hanink here again, even though our producer, Sebastian
Mahfood, is again in Italy. Today, we have an opportunity to learn about a remarkable initiative
for vulnerable people, especially children, in Uganda. The Site for Community Services
Programme (SCOSP) integrates education, health care, and human rights advocacy. Our special
and welcome guest is Michael Sabiiti. Our questions include the following.

September 16, 2021 • 67 min
Welcome to The Open Door! Could it be true that Look Space blocks Catholic devotional posts? This week (September 15th) we explore such provocative, yet evidence-based, conjectures. Our special mystery guest (SMG) is an artist and evangelist. We’ll be talking about devotional posts and what some of our Puritan forefathers would have banned in Boston. Our SMG is also an accomplished iconographer at risk to the wrath of today’s icono...
Share
Mark as Played

September 9, 2021 • 68 min
This week (Sept. 7) we discuss Tradistae, a new development inspired by the Catholic Worker tradition. Our special and welcome guest is Sean Domencic. He is the director and co-founder of Tradistae. Domencic has written and spoken extensively about Catholic social teaching, economics, and politics. He and his wife Monica recently celebrated their first wedding anniversary! They live at Holy Family Catholic Worker in Lancaster, Penn...
Share
Mark as Played

September 3, 2021 • 69 min
This week, panelists Jim Hanink, Mario Ramos-Reyes, and Christopher Zehnder return to a theme central to the Christian life: evangelization. Our special and welcome guest is Jessica Murdoch, Ph.D. She is an Associate Professor of Systematic/Constructive Theology at Villanova University. Murdoch is a wife and mother who is active in parish ministry. We will ask her the following questions. As always, we invite you to suggest others!

August 25, 2021 • 71 min
In this episode of The Open Door, panelists Jim Hanink, Mario Ramos-Reyes, and Christopher Zehnder discuss some political provocations. We’ll tell you why we’re provoked and what we think. Please don’t hesitate to tell us what’s on your mind!

1. An old Jesuit, a priest of blessed memory, once observed that “we pretty much get the political leaders we deserve.” If that’s true, shouldn’t we blame ourselves more than we do? If it’s fal...
Share
Mark as Played

August 17, 2021 • 49 min
In this episode of The Open Door, panelists Jim Hanink and Christopher Zehnder talk with Eric Anton, a writer on military matters for the American Commons, about Afghanistan from the perspective of the American Solidarity Party. (August 17, 2021)
Share
Mark as Played

August 12, 2021 • 75 min
In this episode of The Open Door, panelists Jim Hanink, Mario Ramos-Reyes, and Christopher Zehnder discuss a pro-life amendment to the US Constitution. (August 11, 2021)
Share
Mark as Played

Episode 210: Dr. Rene Trabanino on What it Means to be a Consistently Pro-Life Physician (August 4, 2021)

August 4, 2021 • 70 min
In this episode of The Open Door, panelists Jim Hanink, Mario Ramos-Reyes, and Christopher Zehnder discuss with Dr. Rene Trabanino what it means to be a consistently pro-life physician in California. We’ll also explore what it’s like to serve immigrants, the poor, and the under-insured. Last but not least we’ll consider what it’s like to discover the American Solidarity Party! Among the questions we asked are the following:

July 28, 2021 • 68 min
This week (July 28) on The Open Door, panelists Jim Hanink and Mario Ramos-Reyes discuss Pope Francis’s Traditionis Custodes and its import for what Emeritus Pope Benedict XVI termed “The Extraordinary Rite.” Our welcome and returning guest is Fr. Donald Kloster. We are familiar with his role in preparing the Traditional Latin Mass National Survey. Among the questions we will consider are the following. As always, you are invited t...
Share
Mark as Played

July 16, 2021 • 61 min
On this episode of The Open Door, panelists Jim Hanink and Christopher Zehnder discuss dialogue and debate among Christians as well as the presence of Christians in the public sphere. Our special guest is the prolific commentator, Casey Chalk. He’s a respected and frequent contributor to journals of opinion. Among the questions we plan to ask him are the following. Please feel free to suggest others!

1. Could you please tell us a bi...
Share
Mark as Played

July 10, 2021 • 72 min
In this episode of The Open Door, panelists Jim Hanink, Mario Ramos-Reyes, and Christopher Zehnder speak with guest Tony Guidotti on how an international vision and a commitment to life, justice, and peace translate into a leadership role in the American Solidarity Party. Tony holds a Masters of Global Affairs degree from the University of Notre Dame. Guidotti has worked with Catholic Relief Services and Food for the Poor. He’s the...
Share
Mark as Played

July 1, 2021 • 63 min
This week (June 30th) on The Open Door we discuss reparations in the United States, specifically at the local level, and (yes!) living in Japan. Our special guest, Jason Morgan, PhD (Japanese history), studies legal and political history and philosophy. He recently penned an intriguing essay on reparations for Public Discourse, and he is a frequent contributor to the New Oxford Review and other journals of opinion. Morgan’s most r...
Share
Mark as Played

June 23, 2021 • 61 min
Literature, in the light of beauty and form, with James Matthew Wilson, Professor of Humanities and the Founding Director of the Master of Fine Arts Program at the University of St. Thomas (Houston). Among his many books is The Vision of the Soul: Truth, Beauty, and Goodness in the Western Tradition (Catholic University of America Press, 2017) and The Strangeness of the Good (Angelico, 2020). Here are some questions we’ll be asking...
Share
Mark as Played

1. Isn’t it true that prisons keep us safe?
2. How do you imagine abolition working? Would we wait until we had a new system to put into place, and simply replace all the prisons?
3. One of the main objections that many people have to incarceration is its disproportionate impact on racial...
Share
Mark as Played

June 4, 2021 • 70 min
In this episode of The Open Door, Jim Hanink, Mario Ramos-Reyes, and Christopher Zehnder talk with Sebastian Mahfood about his life, vocation, and work. (June 4, 2021)
Share
Mark as Played