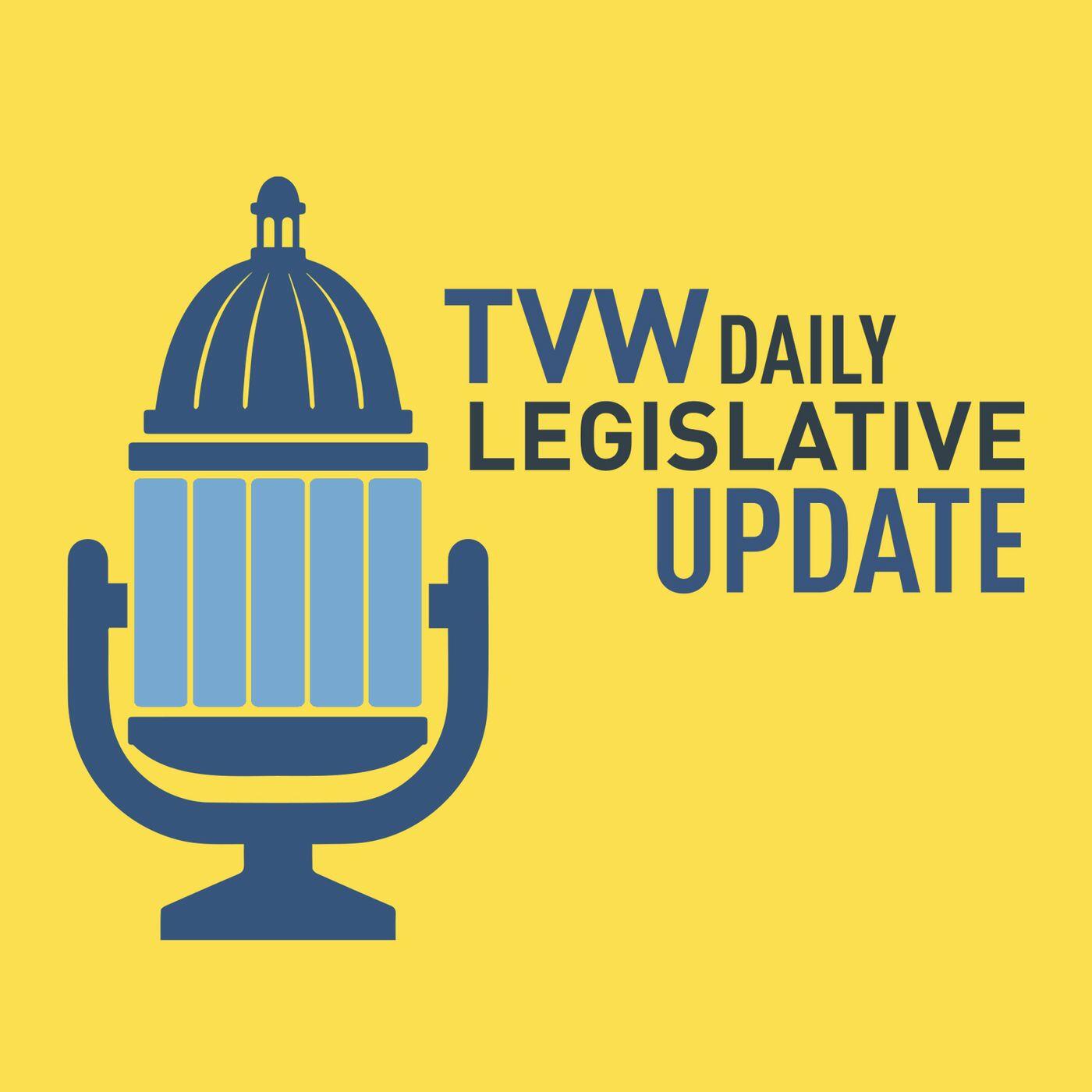 From Olympia, TVW publishes a 90-second daily recap of a legislative event every weekday during the Washington state legislative session. For a full recap of the legislature's activities visit https://www.tvw.org/shows/legislative-review.

April 23, 2021 • 1 min
The House also voted on the concurrence of several bills that have been amended by the senate thursday. One of them was House Bill 1168, which aims to reduce wildfires and improve long-term forest health.
Share
Mark as Played

April 22, 2021 • 1 min
In the afternoon of April 21st, the House convened for a floor debate on the highly-contentious capital gains tax bill. SB 5096 aims to impose a 7% tax on the sales of high-valued assets, such as stocks and bonds--with profits in excess of $250,000. The tax will fund child care and education in the state. Exempt from the tax are retirement funds, all real estate, agricultural resources such as farmland, livestock and timber; as wel...
Share
Mark as Played

April 20, 2021 • 1 min
In the evening of April 19, state senators convened for a floor debate to discuss House Bill 1477, which aims to establish a national 988-crisis hotline to address behavioral health crises and suicide prevention. The hotline would be funded by an excise tax on certain telecommunications services -- which will mean an additional monthly charge on Washingtonians’ cell phone bills.
Share
Mark as Played

April 16, 2021 • 1 min
In the afternoon of Thursday, April 15, the Senate held a floor debate on Senate Bill 5476, a response to the Washington Supreme Court's recent "Blake" decision that decriminalized personal possession of certain amounts of drugs.
Share
Mark as Played

April 15, 2021 • 1 min
On the evening of April 14th, State Representatives convened for a floor session to discuss concurrence on House Bill 1267--concerning independent investigations on police use of force. The bill aims to establish a new state office under the Governor, to look into incidents that involve peace officers’ use of deadly force.
Share
Mark as Played

April 14, 2021 • 1 min
Republican leaders gathered Wednesday morning during a virtual press conference to give their perspective on the legislative session so far.
Share
Mark as Played

April 12, 2021 • 1 min
As its last bill before the deadline, the house took up SB 5044, which aims to dismantle institutional racism in the public school system by requiring training in equity, diversity, inclusion and anti-racism for k-12 teachers, staff, and school board directors.
Share
Mark as Played

April 9, 2021 • 1 min
In the evening of April 8th, state senators debated the passage of SB 5126, also known as the climate commitment act. Requested by Governor Jay Inslee, the climate commitment act aims to build a clean-energy economy and create accountability for limiting emissions across Washington state by establishing a cap and trade program. A cap-and-trade program is a system designed to curb carbon emissions and pollution, where a cap or limit...
Share
Mark as Played

April 8, 2021 • 1 min
State Representatives went through a number of bills on April 7th during a floor debate that lasted through the evening. Of them was Senate Bill 5066--an act that aims to require law enforcement officers to intervene when another officer uses excessive force, and for them to report any wrongdoing by a fellow officer to their supervisor.
Share
Mark as Played

April 7, 2021 • 1 min
In the evening of April 6th, State Senators convened for a floor debate on HB 1054 - an act concerning police accountability, tactics and equipment used during arrests. HB 1054 is a highly-contentious bill that passed out of the house in late February, and has been amended in both chambers as of April 6th. In its original form, the bill proposed to end police use of chokeholds and neck restraints, off-leash dogs, shooting during ho...
Share
Mark as Played

April 6, 2021 • 1 min
On Monday, April 5th, the Senate Ways and Means committee convened for a public hearing on SB 5476 - an act, that if passed, could potentially change how the state penalizes drug possession. Under current state law, any individual who unknowingly carries a controlled substance but is found guilty would receive the same legal penalties charged on someone who is also found guilty but is aware that they are in possession of said subst...
Share
Mark as Played

April 2, 2021 • 1 min
On Friday, April 2, the Senate Ways and Means committee convened for an executive session to vote on several bills--among them, was house bill 1016, which aims to make June 19, also known as Juneteenth--a state legal holiday. Juneteenth commemorates June 19, 1865, when enslaved people in Galveston, Texas learned that the civil war ended and the emancipation proclamation was signed--despite it happening two years earlier in 1863.
Share
Mark as Played

March 31, 2021 • 1 min
On Tuesday, March 30 the State Senate held a floor debate on the senate’s proposed capital or “construction budget”, which totals up to 6.2 billion dollars for the 2021-2023 biennium. The capital budget pays for the construction and maintenance of public buildings, like k-12 public schools, colleges, correctional facilities, state agency buildings, fish hatcheries, state hospitals and much more. The budget also acquires lands for t...
Share
Mark as Played

March 31, 2021 • 1 min
The House Appropriations committee convened in the afternoon of March 30th for a public hearing on senate bill 5172--an act that aims to modify overtime standards for farm workers. Unlike most employees, agricultural employees are not paid time and a half if they work over 40 hours in a workweek. The bill aims to address this with a twofold strategy--first, it aims to eliminate the overtime exemption for farm workers by 2024; and--...
Share
Mark as Played

March 29, 2021 • 1 min
On Sunday March 28th, State Representatives debated the passage of ESSB 5038, which aims to ban the open carry of weapons that can cause injury or death at public demonstrations and state capitol grounds. The bill exempts law enforcement working at the scene, and anyone who owns or is leasing a private property within the vicinity. If it passes, violators may face gross misdemeanor charges and jail time for up to 364 days and a fin...
Share
Mark as Played