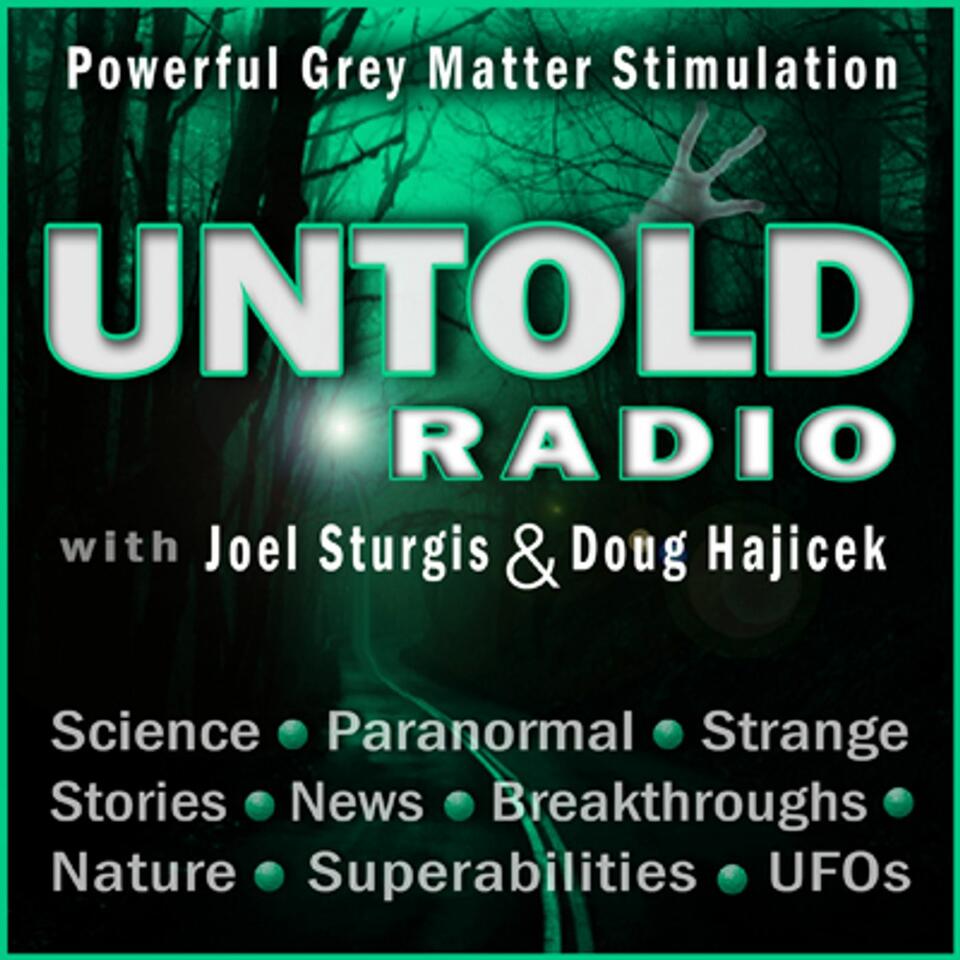 May 19, 2022 • 125 min
Local Minnesota resident is attacked by a bigfoot with a massive boulder.
Share
Mark as Played

May 16, 2022 • 120 min
Author Mark Olly seamlessly combines the disciplines of archaeology, geology, science, and human studies, to push the boundaries of human existence wider in both directions and increase our appreciation of just exactly what the human race could potentially be capable of achieving.
Share
Mark as Played

What Secrets Has This Man Uncovered About The Universe? Ft: Best Selling Author Paul Wallis

May 12, 2022 • 72 min
Paul Wallis is the author of the International Bestseller "ESCAPING FROM EDEN." He is a popular speaker, researcher, author of books on spirituality and mysticism.

As a senior churchman, he served as a church doctor, a trainer of pastors, and an Archdeacon in the Anglican Church in Australia.

Today his work probes the world's mythologies for their insights into human origins, human potential, and our place in the cosmos. ...
Share
Mark as Played

May 6, 2022 • 122 min
Mike Ricksecker is the author of the Amazon best-selling A Walk In The Shadows: A Complete Guide To Shadow People, eight historic paranormal books, and the esoteric tome Alaska's Mysterious Triangle.

He has appeared on multiple television shows and programs as a paranormal historian, including Travel Channel’s The Alaska Triangle, History Channel's Ancient Aliens, Discovery+’s Fright Club, Animal Planet’s The Haunted, B...
Share
Mark as Played

Untold Radio AM: What Can This Historian Teach You About the Paranormal? Ft: Historian Charles Kader

He is a member of the Mohawk Turtle Clan and lives on the St. Regis Native North American Reservation. It is a riverfront community on the St. Lawrence River where the Provinces of Ontario and Quebec meet.

Charles became aware of the Patterson-Gimlin Bigfoot film in 1975. He then began watching other films and television shows which has led to ...
Share
Mark as Played

Untold Radio AM: What is the Bigfoot Mapping Project? Ft: Scott Tompkins

April 21, 2022 • 120 min
CLICK HERE TO LEARN ABOUT NEW SHOWS BEFORE THEY ARE RELEASED
https://untoldradioam.com/

Scott aims to leverage technology and crowd-sourcing to enrich the field of Bigfoot Research. Driven by the desire to protect and learn about an undiscovered species, Scott uses his analytical skills to share new maps and information with the world’s Bigfoot Community.

Untold Radio AM: What Can This Pterosaur Eyewitness Teach You About the Paranormal?

April 14, 2022 • 123 min
Jason McLean is a biblical paranormal researcher and eyewitness to a living pterosaur.
Share
Mark as Played

Untold Radio AM: What Can This Biologist Teach You About the Sasquatch Mystery?

April 7, 2022 • 123 min
GO HERE TO LEARN ABOUT NEW SHOWS BEFORE THEY ARE RELEASED
https://untoldradioam.com/

I was the five-year-old with a green frog tadpole instead of a goldfish. In 5th grade, I got my first snakes, and Mrs. Weber said the word Abominable Snowman and I was hooked. That was 67, and the Patterson film was in the newspaper.

Two years later, at a church camp in northern Wisconsin, I heard some loud hissing from something at the lake's edg...
Share
Mark as Played

Untold Radio AM: Matt Pruitt – What Does This Bigfoot Field Researcher Know About Sasquatch?

March 31, 2022 • 123 min
CLICK HERE TO LEARN ABOUT NEW SHOWS BEFORE THEY ARE RELEASED
https://untoldradioam.com/

Matt Pruitt has been actively pursuing a resolution to the bigfoot or sasquatch conundrum for nearly two decades. He is an avid field researcher, public speaker, and has appeared on various media outlets and platforms to discuss the mystery ape phenomenon. Matt is also the producer and editor of the popular podcast “Bigfoot and Beyond with Cliff a...
Share
Mark as Played

Untold Radio AM: Levi Machovec – Author of The Sasquatch Paradox_ The Scientific Defiance to the Recognition of Relic

March 24, 2022 • 120 min
Levi graduated in 2019 from the University of Wisconsin Platteville with a bachelor's degree. He majored in history and minored in statistical analysis. He has spent the past year studying for the law school admission test with the hopes of going to school in the fall of 2023. Outside of his interest in Sasquatch, Levi is an avid sports fan. His favorite teams are the Brewers, Badgers (both basketball and football), Packers, an...
Share
Mark as Played

Untold Radio AM: Todd Neiss – Bigfoot Investigator for Over 27 Years and Beechfoot Founder

Todd Neiss is a Bigfoot witness-turned-researcher, Todd M. Neiss has been an active investigator for over 27 years. Born and raised in the Pacific Northwest, he grew up hearing of these legendary creatures, alternately known as Bigfoot or Sasquatch, but gave it little credibility beyond that of a good old-fashioned campfire tale designed to frighten young campers. All of that changed for Todd in the spring of 1993...
Share
Mark as Played

March 10, 2022 • 119 min
Unfortunately, Co-Host Joel Sturgis was busy this week, so Alex is filling in as a Co-Host with Doug Hajicek for this week's episode.

Hello. My name is Brian and I am the host of the Sasquatch Odyssey Podcast.

My interest in the paranormal and Cryptids started at a very early age. I grew up in the north Georgia mountains and have spent most of my time in the wonderful south! As a child I constantly heard tales of ...
Share
Mark as Played

March 3, 2022 • 117 min
Jay Vernon grew up on a rural farm in Central Wisconsin in the late '60s through the mid-'80s. From there, he'd experience many strange and unusual things throughout those years, unforgettable sightings as a teenager in the deep woods where he spent so much of his time. He was always conscious and knew that there were dangerous animals in the woods of Adams County but not just how much.

February 24, 2022 • 118 min
Kevin Randle is a retired Army lieutenant colonel, served in Vietnam as a helicopter pilot and aircraft commander, and in Iraq as a battalion intelligence officer.

He began his writing career contributing to UFO magazines and for more than forty years has published more than 100 books including science fiction, action adventure and almost 30 books about UFOs. He has appeared on dozens of TV shows and documentaries and hundreds of ra...
Share
Mark as Played

February 17, 2022 • 120 min
Peter Robbins is an investigative writer, author and lecturer whose writing and research are focused on the subject of truly anomalous UFOs and their implications for humanity. He has appeared as a guest on and consultant to numerous radio shows, television programs and documentaries. HE IS also host of the live weekly two-hour radio talk show, Meanwhile, Here On Earth” on KGRA Digital Broadcasting.

Lecture topics include but are no...
Share
Mark as Played

February 10, 2022 • 122 min
M.G Stephens is a neurodivergent medium/empath who grew up knowing she was very different but not sure in what way. She started experiencing paranormal activity as early as two years old.

Her mother was also a well-known psychic that worked with detectives and solved cold cases. M.G. struggled to accept her abilities for decades and tried her best to dismiss all the terrifying encounters she was having daily.


After many years of hesi...
Share
Mark as Played

February 3, 2022 • 104 min
Josh "Wolf" Turner collects and discusses real accounts of encounters with the supernatural, cryptids, demonic, and everything in between. Josh is a Podcaster of the popular "Paranormal Round Table" Podcast.
Share
Mark as Played

January 27, 2022 • 120 min
Tony Gerard was into cryptozoology before it was cool. He voraciously read everything he could about the Loch Ness Monster and Bigfoot as a kid. He listened attentively as local old-timers told of black panthers roaming the hills and swamps of western Kentucky and southern Illinois where he grew up.


His interest in the natural world led him to pursue a degree in biology and later an advanced degree in zoology. For a number of years,...
Share
Mark as Played

January 20, 2022 • 120 min
Tim Halloran is the author of the upcoming book, The Bigfoot Influencers. The book highlights researchers, scientists, and influencers who are currently performing impactful work on the study related to the subject of Bigfoot. With the influencers, Tim dives into their theories, experiences, and research, giving readers a glimpse into their historical impact on the subject and their current projects.

Tim’s inspiration to write the b...
Share
Mark as Played

His co-edited volume, From Biped to Strider: the Emergence of Modern...
Share
Mark as Played