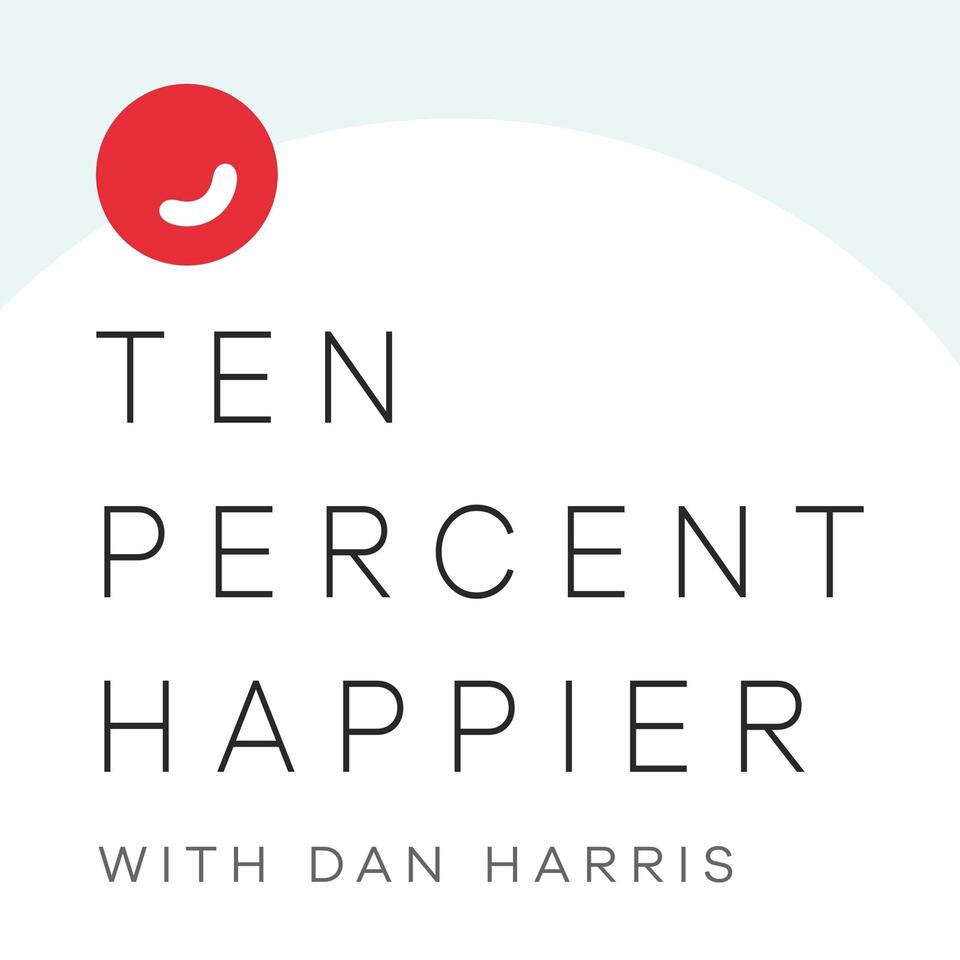 New episodes come out every Monday, Wednesday and Friday for free, with 1-week early access for Wondery+ subscribers. Dan Harris is a fidgety, skeptical journalist who had a panic attack on live national television, which led him to try something he otherwise never would have considered: meditation. He went on to write the bestselling book, 10% Happier. On this show, Dan talks with eminent meditation teachers, top scientists, and even the odd celebrity. Guests include everyone from His Holiness the Dalai Lama to Brené Brown to Karamo from Queer Eye. On some episodes, Dan ventures into the deep end of the pool, covering subjects such as enlightenment and psychedelics. On other episodes, it’s science-based techniques for issues such as anxiety, productivity, and relationships. Dan's approach is seemingly modest, but secretly radical: happiness is a skill you can train, just like working your bicep in the gym. Your progress may be incremental at first, but like any good investment, it compounds over time.

Since the start of COVID-19, more people are working from home, and with that, more people have strong opinions about whether or not it’s the best route to take.

In today’s episode, Malcolm Gladwell responds to recent backlash over why he believes that working in an office—and the collaborative creative environment it can offer—is in your best interest (and in the interest of others). We also dive deep into some of the important the...

485: A Kind of Meditation You Might Be Overlooking | Bonus Meditation with Alexis Santos

Bringing mindfulness to walking is an opportunity to build awareness and relax the mind as you move about your day.

Alexis Santos is a featured teacher on the Ten Percent Happier app and has been in the field of mindfulness and meditation since 2001. He has been a long-time student of Sayadaw U Tejaniya, with whom he ordained as a Buddhist monk, and has taught at retreat centers around the globe.

To find this medi...

484: Do You Want to Be Happier or Not? | Mushim Patricia Ikeda

Oftentimes Buddhism can take a tough love, no nonsense approach to happiness by saying, if you want to be happier, sometimes you need to face hard truths.

In today's episode we’re going to talk about a Buddhist list called The Three Characteristics. These are the three non-negotiable truths about reality, which you have to see and understand in order to be happy. Granted, when looked at from a certain angle, these truths, or ch...

These days, the word mindfulness has become a buzz phrase but very often people don’t know what the word actually means, much less how to practice it. One simple definition of mindfulness is the ability to see what’s happening in your mind without getting carried away by it. The benefits of doing so are vast and profound— from decreased emotional reactivity to being more awake to what’s actually happening in your life.

482: A Meditation for When Things Suck | Bonus Meditation with Kaira Jewel Lingo

Cultivating what’s good in us helps during times of both abundance and adversity. In fact, it’s when times are hard that we need it the most.

Kaira Jewel Lingo was an ordained nun for 15 years in Thich Nhat Hanh’s Order of Interbeing. She's now a lay dharma teacher based on Long Island. She graduated from Stanford University with a B.A. and an M.A. in anthropology and social sciences. She’s also the author...

There are so many benefits to mindfulness with one of the biggest being the cultivation of more self-awareness. This cultivation can lead to identifying the unhelpful mental habits that can develop over the years.

Today we’re going to talk to Carol Wilson who offers very clear and practical ways that Buddhist meditation can help us turn down the volume on our unproductive mental habits and be less reactive.

Wilson is a guiding teache...

Many of us may have a reflexive reaction when we notice we’re feeling down: we want it to go away. Maybe we think something is wrong with us and we automatically self medicate in any number of ways. But how do we square this with the fact that many of us may also really like sad movies and music? And making things even more complex, how do we compute the fact that the universe is constantly handing us opportunities to feel awe, gra...

479: A Meditation for Pain Relief | Bonus Meditation with Sharon Salzberg

Sharon teaches you a simple breathing technique to release tension and reduce the intensity of a painful experience.

A towering figure in the meditation world, Sharon Salzberg is a prominent teacher & New York Times best-selling author. She has played a crucial role bringing mindfulness and lovingkindness practices to the West.

366: How to Outsmart Your Pain | Christiane Wolf

Sit in meditation for a few minutes and you’re likely to experience pain, either physical or psychological. Hang around the meditation scene for very long, and you are likely to hear the expression, “Pain is inevitable; suffering is optional.”

And that’s what this episode is all about— boosting your pain tolerance through meditation. Because pain really is inevitable, but can you reduce your suffering through mindfulness and compas...

We all have long-standing painful patterns of behavior or inner storylines that can cause us to react disproportionately or inappropriately to everyday events.

Today's guest, Dr. Radhule Weininger, has a term for this. She calls them longstanding recurrent painful patterns or LRPPs.

Weininger is a clinical psychologist, psychotherapist, and teacher of Buddhist meditation and Buddhist psychology. She has a new book, Heart Medic...

477: An Antidote for Anxiety | Bonus Meditation with Sebene Selassie

Find freedom from obsessive loops of fear by getting grounded in the body, dropping the stories, and bringing some kindness to the struggle.

Growing up, Sebene felt like a big weirdo. Born in Addis Ababa, Ethiopia and raised in white neighborhoods in Washington, D.C., she was a tomboy Black girl who loved Monty Python and UB40. She never believed she belonged. Thirty years ago, she began studying Buddhism as an...

476: How to Actually Be Present | Matthew Brensilver

Today we’re gonna tackle one of the best known contemplative clichés: being in the present moment and inhabiting the now.

The present moment seems to be a state we aspire towards, but are rarely given practical information about how to actually achieve. But today’s guest, Matthew Brensilver offers just that— practical information on how to achieve being present. We also explore his argument that when painful memories surface in medi...

475: Run Towards the Danger | Sarah Polley

Often, when you’re afraid of something, the best advice is deeply counterintuitive, not to mention inconvenient: to turn toward the source of your fear.

Today we’re going to talk about the fear of confronting your own past with our guest Sarah Polley.

Polley is an Oscar nominated filmmaker and actress who recently wrote a new book, called Run Towards the Danger: Confrontations with a Body of Memory. In her book, she explores the rel...

Expand and strengthen your understanding of awareness through an exploration of focused, investigative, and flexible awareness.

Diana Winston is the Director of Mindfulness Education at UCLA's Mindful Awareness Research Center and the author of The Little Book of Being: Practices and Guidance for Uncovering Your Natural Awareness. She has taught mindfulness since 1999 at hospitals, universities, corporations,...

473: The Opposite of Depression | Samantha Boardman

Depression is a debilitating problem both on an individual and a societal level and it has only gotten worse during the pandemic. According to the World Health Organization, depression is now one of the leading causes of disability on the planet.

Our guest today Dr. Samantha Boardman is going to talk about what she calls the opposite of depression— something called positive psychiatry. This approach focuses on the positive things i...

472: How a Buddhist Monk Deals With Anxiety | Yongey Mingyur Rinpoche

Anxiety has long been a massive societal issue that has spiked during the pandemic.

In this episode, renowned Buddhist monk Yongey Mingyur Rinpoche talks in detail about how he personally works with anxiety and panic and the practices he draws upon when dealing with these states.

Mingyur began doing long retreats in his teens and now teaches all over the world.  He’s written the books The Joy of Living: Unlocking the Secret and Scie...

471: What Does Interconnection Actually Mean? | Bonus Meditation with Jeff Warren

Connecting with the universal world wide web of meditators expands your perspective and helps cultivate a deep feeling of belonging.

Jeff is an incredibly gifted meditation teacher. He's trained in multiple traditions, including with renowned teacher Shinzen Young. Jeff is the co-author of NY Times Bestseller "Meditation for Fidgety Skeptics," and the founder of the Consciousness Explorers Club, a medit...

470: An Episode About Anger | Jacoby Ballard

In this episode, the social justice educator and activist Jacoby Ballard talks about a universal, or near universal, issue: anger. And, he offers us two mental skills that can help channel anger into something even more powerful and effective. Those skills are forgiveness and equanimity.

Ballard is a meditation and yoga teacher and the author of a new book called, A Queer Dharma: Yoga and Meditations for Liberation

How, on this planet, did we go from molten lava and shifting tectonic plates to sentient beings? How are you awake and aware right now? Who and where and what exactly is the “you” that is experiencing everything?

Guest Anil Seth says that exploring these questions can lead to real and radical changes in your life, including reducing your emotional reactivity.

Seth is a Professor of Cognitive and Computational Neuroscience at the Univ...

468: Meditating on a Mystery | Bonus Meditation with JoAnna Hardy

What and who are you? In this advanced exploration, you are invited to contemplate what is and isn’t definable about your identity.

JoAnna Hardy is an insight meditation (Vipassanā) practitioner and teacher. She is also on the faculty at the University of Southern California, a meditation trainer at Apple Fitness+, a founding member of the Meditation Coalition, a teacher's council member at Spirit Rock Med...