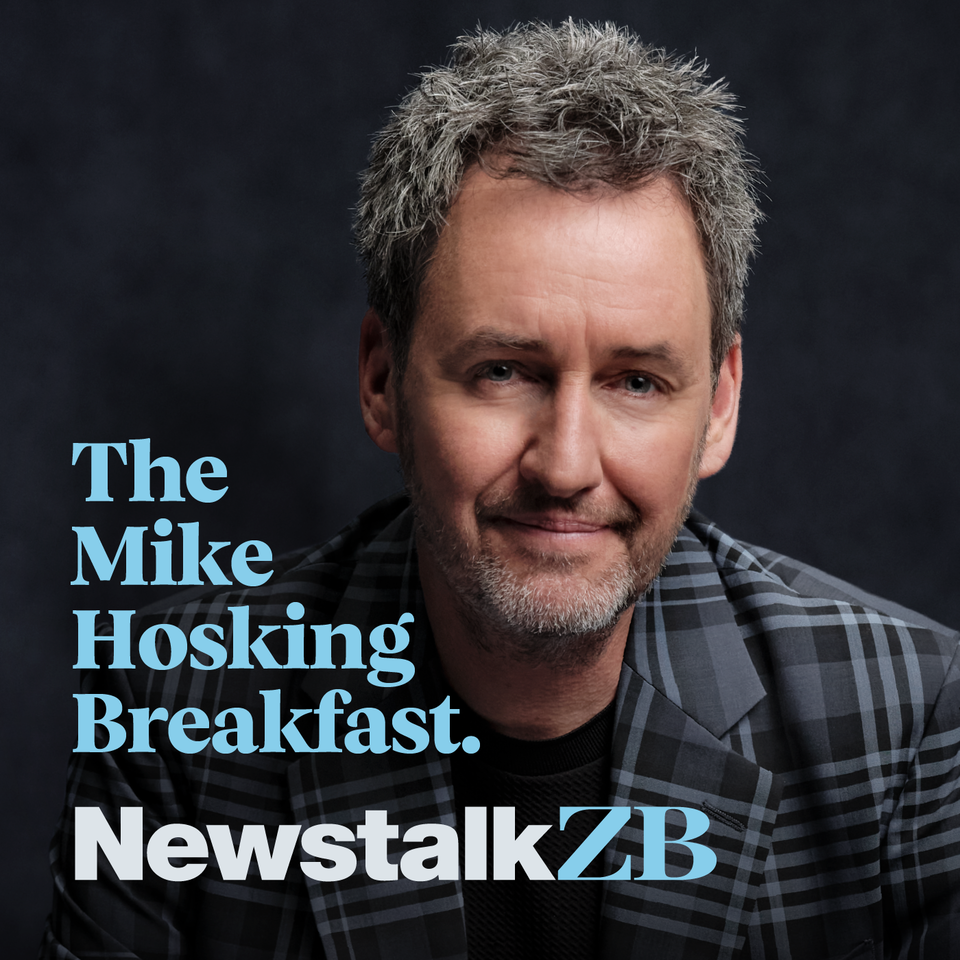 Open your mind to the world with New Zealand’s number one breakfast radio show. Without question, as New Zealand’s number one talk host, Mike Hosking sets the day’s agenda. The sharpest voice and mind in the business, Mike drives strong opinion, delivers the best talent, and always leaves you wanting more. The Mike Hosking Breakfast always cuts through and delivers the best daily on Newstalk ZB.

Grant Dalton: Team New Zealand chief says Auckland will always be in the mix to host the next America's Cup

September 16, 2021 • 5 min
The prospect of the next America's Cup being defended on our shores remains a possibility.
It comes as the Royal New Zealand Yacht Squadron and Team New Zealand have extended the selection period for the three shortlisted offshore venues.
They are Spain, Ireland and Saudi Arabia.
Team New Zealand Chief Executive Grant Dalton told Mike Hosking the extension will also give them time to see if it's possible to hold the next ev...
Share
Mark as Played

Mike Hosking: The Māori Party need to take a leaf from ACT's book

September 16, 2021 • 2 min
The Māori Party's petition to change the name of New Zealand is, of course, going nowhere, which may ultimately be an indication as to where the party itself is going.
They are a rarity in MMP, a party ousted from Parliament, but able to make a comeback.
Many a small party have come and gone, and with the exception of New Zealand First, no one has managed the trick.
The trick about the trick, if you pull it off, is not to look ...
Share
Mark as Played

September 16, 2021 • 5 min
A former Defence Minister says New Zealand needs to get more involved if we want to build a better relationship with our allies.
New Zealand was left out of a three-way deal between Australia, the US and UK designed to counter Chinese influence in the Asia-Pacific region.
Wayne Mapp says the move shows that Australia wants to join the big international players.
The former National Cabinet minister told Mike Hosking we need to s...
Share
Mark as Played

Craig McMillan: Former Blackcap ahead of New Zealand's first tour to Pakistan since 2003

September 16, 2021 • 2 min
The Blackcaps playing cricket in Pakistan is officially a thing again, as of tonight.
We haven't been back since 2003 when the tour was cancelled mid-way through after a suicide bombing outside the hotels where the two teams were staying.
All tours were pulled in 2009 after the Sri Lankin team's bus was attacked.
Now they're back, but it still isn't like the players can walk around willy nilly - straight off the ...
Share
Mark as Played

September 16, 2021 • 3 min
Changes are on the way for medicinal cannabis medicines in this country.
The Ministry of Health are looking to ease the strict standards for the medicines, all part of making them more affordable and not forcing people to have to head to the black market.
Executive Director of the NZ Medicinal Cannabis Council Sally King joined Mike Hosking.
LISTEN ABOVE
Share
Mark as Played

September 16, 2021 • 6 min
Grant Robertson's remaining optimistic when it comes to our economy.
Gross Domestic Product grew by 2.8 percent in the June quarter, more than twice what the market had been expecting.
But there are concerns the third quarter won't be as strong, because it'll take into account this Delta outbreak.
The Deputy Prime Minister told Mike Hosking we could still see a bounce back by the last quarter.
"I appreciate the f...
Share
Mark as Played

September 15, 2021 • 9 min
One of Australia's most iconic shows is making a grand comeback.
Packed to the Rafters, one of the most popular dramas to ever hit Australian and New Zealand screens, ended in 2013 after six seasons.
But it's back - with Back to the Rafters coming to Amazon Prime tomorrow.
It takes up the show several years later in the lives of the Rafter family.
And our own Rebecca Gibney is back to play a starring role and she joined...
Share
Mark as Played

September 15, 2021 • 3 min
Do millennials make for below-par reality tv?
The UK's hugely popular "The Great British Bake Off" has announced it's cast for the new season and it's one of the oldest line-ups in recent years.
The average age of the contestants is 40 - and it's because critics argued that millennials held less appeal to watch than older generations.
Great Kiwi baker and one of the judges of The Great Kiwi Bake Off Dean ...
Share
Mark as Played

September 15, 2021 • 1 min
You could see it coming from a mile away. We're now hitting vaccine resistance.
We have done well with about 78 percent of the eligible population jabbed or booked for a jab. But it's where we hit the wall, and we hit it this week. It would be one of the highest resistance walls in the world; so that in and of itself is something to be proud of.
There are many countries who ultimately ended up being widely vaxxed but hit a ...
Share
Mark as Played

September 15, 2021 • 3 min
In a potential big step for the anti-doping the world, the World Anti-Doping Agency is set to review whether cannabis should continue to be a banned substance.
The recent case of US sprinter Sha'carri Richardson was front and centre when she admitted to taking cannabis following the death of her mum.
She was subsequently banned for a month which included the Tokyo Olympics.
Former Olympian and professor emeritus in sports med...
Share
Mark as Played

September 15, 2021 • 3 min
A warning that New Zealand can't take a "she'll be right" approach to our vaccination rate.
New modelling shows if our vaccination rate reaches the 70s or low 80s, opening borders and lifting restrictions could lead to thousands of deaths.
Tens of thousands of people could also be hospitalised, stretching the health system to its limits.
Canterbury University's Professor Michael Plank told Mike Hosking we must g...
Share
Mark as Played

September 15, 2021 • 4 min
Air New Zealand wants to fly hydrogen-powered aircraft.
It's teaming up with Airbus to research such planes.
Chief Executive Greg Foran told Mike Hosking says it's on the table for domestic flights.
"So they will use green hydrogen to fly, and on shorter routes we'd actually use electric."
It's hoped hydrogen-powered aircraft will be part of Air New Zealand's fleet by 2030.
LISTEN ABOVE
Share
Mark as Played

David Seymour: Act Party leader says there is a growing appetite for change in Government

September 15, 2021 • 3 min
David Seymour is closing in on National in two recent opinion polls.
A Curia poll conducted for the Taxpayers' Union, puts the Act Party on 14.9 per cent - while National's on 21.2 per cent.
Recent UMR polling data obtained by Newstalk ZB, also puts Act at 13 per cent.
The Act Party leader says told Mike Hosking it shows there's a growing appetite for a change in Government.
"At the election, Act plus National was ...
Share
Mark as Played

Alistair Cochrane: Schools lose 40 million dollars in revenue between 2019 and last year due to lack of international students

September 15, 2021 • 2 min
A lack of foreign pupils is likely to mean more pain for schools next year.
Primary, intermediate and secondary schools lost $40 million in revenue between 2019 and last year as international students went home.
The numbers are expected to be worse this year and next year.
Waihi College Principal Alistair Cochrane told Mike Hosking his 35 European students have left, meaning some staff have already lost their jobs.
"We've p...
Share
Mark as Played

Paige Hareb: Disappointment at dismissal of seperate MIQ facility for athletes by government

September 14, 2021 • 2 min
Disappointment that the Government have automatically dismissed a separate MIQ facility for our athletes.
We already know the plight of our athletes overseas; the Warriors can't get home, Ryan Fox, Hayden Wilde, Michael Venus, they all can't get a spot in MIQ and face months away.
Others have visas expiring and will be kicked out of the country regardless if they have a spot to come home to or not.
But what about those a...
Share
Mark as Played

Mike Hosking: When will the Govt realise it's powerless over housing?

September 14, 2021 • 2 min
It was January this year when our Prime Minister had returned from holiday, determined to address a wrong that needed righting.
She had decided, or most likely someone had told her to decide, that housing was out of control, so she announced she would fix it. Literally. She said she "would fix it."
She made the announcement along with her state housing plan, which was actually just a re-announcement of her state housing pla...
Share
Mark as Played

Andrew Little: Health Minister would like to see 90 percent vaccination rate before restrictions can ease

September 14, 2021 • 6 min
The Health Minister has bold ambitions for New Zealand's vaccination rate.
A range of initiatives are being rolled out to increase vaccination numbers, with six buses being used as mobile vaccine clinics in Auckland from tomorrow.
The Government hasn't set a specific target, on how many people it would like to see vaccinated.
But Andrew Little to Mike Hosking he'd like to see the vaccination rate hit the high 90s, so a ...
Share
Mark as Played