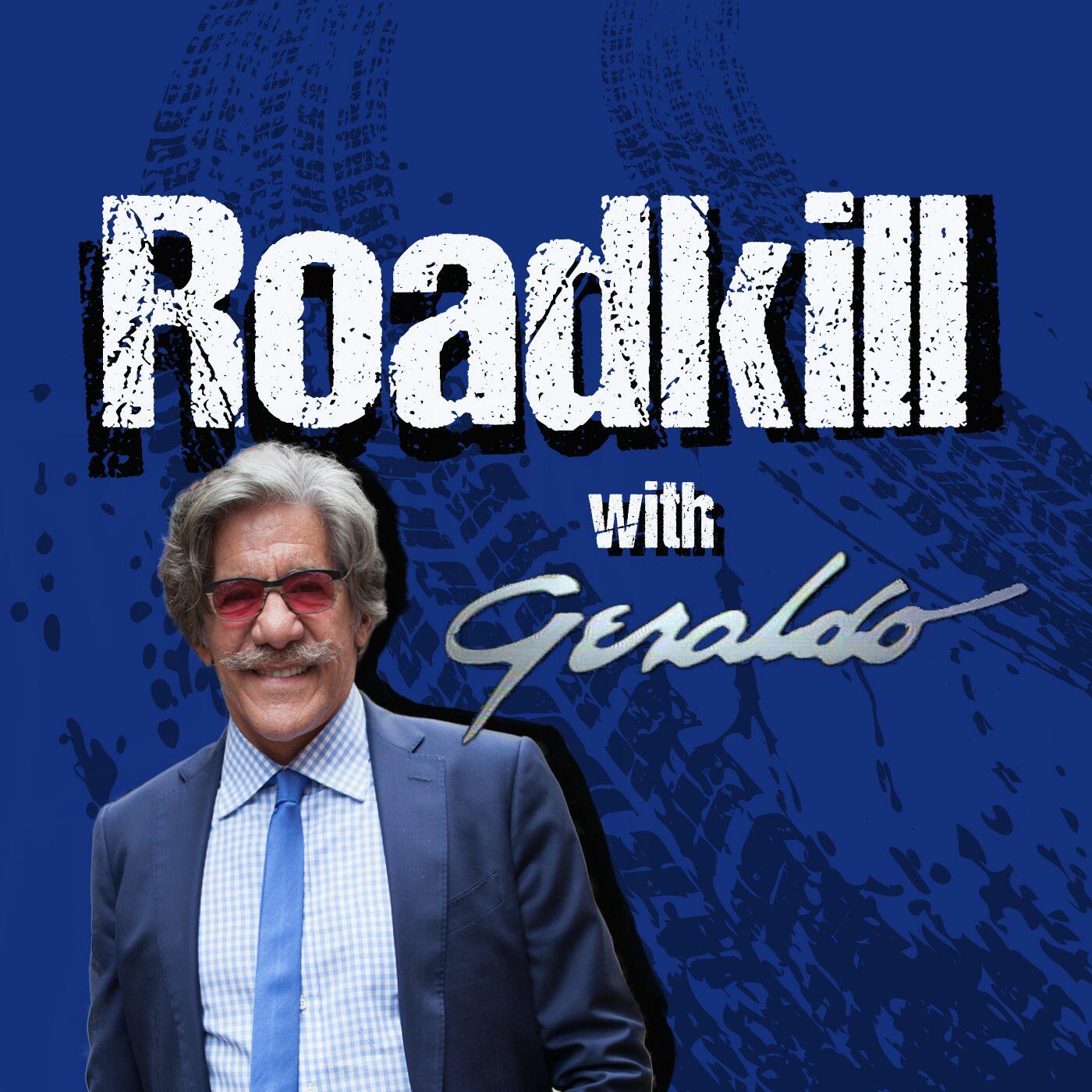 Former Fox News Chairman and CEO Roger Ailes once told Geraldo Rivera that the only thing in the middle of the road is road kill. Geraldo contends that there is more than road kill in the middle and the county needs a balance between the far left and far right, thus the “Roadkill with Geraldo Rivera” podcast was born. Rivera began his 48-year career as a television reporter at WABC-TV in New York and was a member of the original cast of ABC's Good Morning America. He had an eight-year association with ABC's 20/20 as an investigative reporter and produced and hosted The Geraldo Rivera Show for 11 years. Prior to joining Fox News, Rivera served as host of CNBC's number-one rated prime time show, Rivera Live, where his critically-acclaimed coverage of the O.J. Simpson civil trial verdict set an all-time CNBC rating record. Rivera is a veteran foreign correspondent who has been on the frontlines of many international conflicts since 1973. Geraldo is also a three-time winner of the Robert F. Kennedy Journalism Award, the Scripps Howard Foundation National Journalism Award and has received more than 170 awards for journalism, including the prestigious George Foster Peabody Award, three national and seven local Emmys, and two Alfred I. duPont - Columbia University Awards. He is a graduate of the University of Arizona and Brooklyn Law School and is the author of eight books, including The Geraldo Show – A Memoir.

May 7, 2021 • 34 min
Frank Jackson has announced that he will not be pursuing an unprecedented 5th term as Cleveland Mayor. Geraldo talks with former Cleveland Mayor and Congressman Dennis Kucinich about Mayor Jackson's legacy. Later, Ohio State Representative Reggie Stoltzfus joins the program to talk about his bill in the state legislature that would bar transgender athletes from competing with women.
Share
Mark as Played

May 6, 2021 • 33 min
Facebook has decided to keep President Trump off its platform. Geraldo explains why that's a load of crap and also weighs in on California Guboritoal Candidate Katlyn Jenner and takes your calls.
Share
Mark as Played

May 4, 2021 • 33 min
After reflecting on the Kent State Shootings, Geraldo talks to Rep, Tim Ryan (D-OH) about the recent drought of workers across the country and his ongoing Senate run. Later Doctors Charles Modlin and Bob Fafalak join the program to talk about the Pfizer vaccine opening up for kids 12-15 years old.
Share
Mark as Played

May 3, 2021 • 37 min
Restaurants, retail, and many other businesses are starving for workers- so much so that businesses are closing early or not even opening at all. Geraldo and producer Rob talk about the ramifications of the additional Covid unemployment benefits.
Share
Mark as Played

April 30, 2021 • 37 min
Facts are facts- It's very hard to be a cop in 2021. Geraldo mentions the reasons why officers are leaving the force in record numbers and what can be done to fix the problem not only for the officers but also for the people they protect. NYPD Super Cop Bo Dietl joins the program.
Share
Mark as Played

April 29, 2021 • 32 min
After his first 100 days, President Biden addressed a joint session of Congress. Geraldo weighs in on the Six Trillion Dollar Man and backs Senator Tim Scott's statements that America is not a racist country,
Share
Mark as Played

April 27, 2021 • 36 min
Is law enforcement systemically racist? Geraldo weighs in while in the wake of a new group of officer-involved shootings. Also WTAM News Anchor. Tom Moore joins the program to give some new details on the shooting death of a six-year-old boy and explain how the 2020 census numbers will impact Ohio moving forward.
Share
Mark as Played

April 26, 2021 • 34 min
As Hollywood preaches to us while wearing $3,000 ball gowns about officer-involved shootings, the casualties are mounting in the ghetto civil war. Geraldo weighs in after a deadly weekend end in Cleveland that saw a 6-year-old boy shot and killed.
Share
Mark as Played

April 23, 2021 • 30 min
There are so many horrific ways to lose your life in the Ghetto Civil War, why add one more to the list? Geraldo weighs in on the latest officer-involved incidents along with the ever-present problem of so-called black-on-black crime.
Share
Mark as Played

April 22, 2021 • 35 min
As the fact are coming in from the Columbus Police Department, it's becoming more and more apparent that Lebron James leaped before he looked when he tweeted about the officer-involved shooting of Makiyah Bryant. Geraldo talks about the fine line law enforcement walks every day and takes your calls.
Share
Mark as Played

April 21, 2021 • 30 min
Derek Chauvin has been found guilty on all three counts. Geraldo reacts to the verdict, along with the news of another controversial officer-involved shooting, this time in Columbus.
Share
Mark as Played

April 19, 2021 • 28 min
While tensions in Minnesota are running high, Geraldo talks to Cleveland mayoral hopeful Kevin Kelly about relations between the police and the people they are charged to protect. Later, Steve Harrigan from Fox News provides a live update from Minneapolis.
Share
Mark as Played

April 16, 2021 • 35 min
Back in Cleveland, Geraldo talks to local business owners and managers about the dearth of people wanting to work while unemployment payments have increased during the pandemic. Rep. Tim Ryan (D-OH 13) joins the program to talk about worker's rights and Ohio's soon-to-be-open Senate seat.
Share
Mark as Played

April 15, 2021 • 34 min
Another segment with Dan Bongino, and another epic confrontation. Geraldo weighs in on calling his Fox News colleague a "son of a b***h" on national TV. Later Michael Tobin of Fox News joins the program to give an update on the Derek Chauvin trial and protests in Minneapolis.
Share
Mark as Played

April 13, 2021 • 35 min
After reflecting on his particularly intense exchange with Dan Bongino, Geraldo and Erica weigh in on the recent officer-involved incidents along with the news that we will be pausing the use of the Johnson & Johnson covid vaccine. Ohio State GOP Chair Bob Paduchik joins the program.
Share
Mark as Played

April 9, 2021 • 36 min
Prince Phillip had died at 99. Geraldo reflects on his interactions with the husband of Queen Elizabeth. Later, with the border still hemorrhaging, Geraldo weighs in on a problem with no easy fix.
Share
Mark as Played

April 8, 2021 • 34 min
After a record-breaking year, violent crime is still on the rise in Cleveland- and northeast Ohio isn't alone. Other cities like St. Louis, Detroit, and Chicago are in similar situations. Geraldo and Erica weigh in and take your calls.
Share
Mark as Played

April 6, 2021 • 36 min
As more and more flood the border, Geraldo wants to bring order to the border- and that starts with finishing the wall.
Share
Mark as Played

April 5, 2021 • 33 min
As more and more get their vaccinations, questions are coming up about businesses requiring documented proof of vaccination to do face-to-face business. Geraldo weighs in and takes on more than a few callers who disagree.
Share
Mark as Played

April 2, 2021 • 41 min
After a discussion about the ongoing flood of unaccompanied minors at the border, Geraldo and Erica talk to defense attorney Authur Aidala about the chances of former Minneapolis Police Officer Derek Chauvin.
Share
Mark as Played

Chat About Roadkill With Geraldo