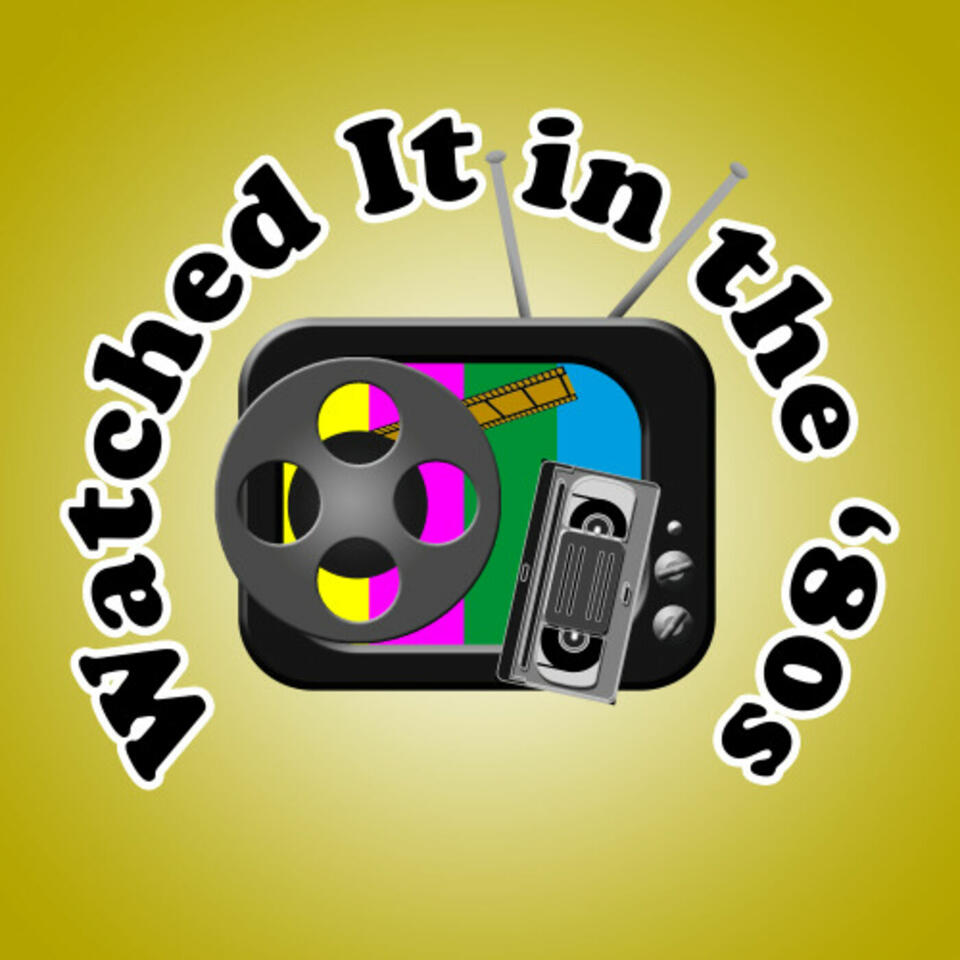 Watched It in the '80s is a podcast that dives into some of the great films and TV shows from that nostalgic decade known as the '80s.We'll talk about movies from different genres like Comedy, Drama, Action, Horror, Sci-Fi. Award winning films and some that fell short. Movies we remember and some we've forgotten. We'll discuss our top scenes, mention our favorite quotes, and talk about the writers, directors, actors, and actresses and what they may be up to now. We'll share some box office numbers as well. But Watched It in the '80s isn't just a movie podcast. We'll have special episodes dedicated to TV shows too and reminisce about some of their more popular episodes and where the cast is today.

Watched It in the '80s Episode 15 "Ghostbusters Afterlife Review"

In Episode 15, I welcome my friend and talented podcaster, Ben Beck to review the recently released "Ghostbusters Afterlife".  I deviate from my normal format for this special episode and Ben and I discuss the storyline and characters in detail in a slightly chronological and yet open way.
SPOILERS O' PLENTY!!
If you haven't seen the movie, go see it and then come back to hear our take.

Watched It in the '80s Episode 14 "The Untouchables"

On this episode, first time cohost Eric and I discuss in depth our most memorable scenes of one the most iconic films of the 1980's. "The Untouchables" features a star studded cast including Kevin Costner, Robert DeNiro, Andy Garcia, and the late Sean Connery. This was Connery's Oscar winning performance for Best Actor in a supporting role.

This film is directed by Brian DePalma and also has an amazing music score b...

Happy Halloween! In Episode lucky #13, Jerry and I discuss 1981's "An American Werewolf In London". It was written and directed by John Landis and starred David Naughton and Jenny Agutter. This was the first film to win an Academy Award for Best Make-up.

Don't forget to rate and review the podcast if you haven't. It's the best way to help us grow!

To submit feedback for this or future episodes, you can get in...

In Episode 12, Jayme and I will be covering "The Evil Dead" which was Sam Raimi's first full length feature film starring Bruce Campbell. It's campy, it's gory, it's  classic. This film is a low budget wonder that should be appreciated for the work of art that it is. Hope you enjoy our coverage!

And as I mention in the podcast, I am a guest on the Wilhelm podcast this week with Ben Beck, a fantastic podcast h...

In this episode, cohost Jayme and I talk about the 1981 slasher sequel Friday The 13th Part II.
This was the directorial debut for Steve Miner and was written by Ron Kurz. This movie pays tribute to the first with an almost identical storyline; but with a new director, a larger budget, and a brand new killer, it propels this franchise to places no one could imagine. Also Amy Steel (as Ginny) is an extremely strong female lead.

In this episode, we start with the first installment of the Indiana Jones franchise ,Raiders of the Lost Ark from 1981. This piece of movie history features the collaborative works of Steven Spielberg and George Lucas. Also a dynamic Music score by John Williams and outstanding acting performances from Harrison Ford, Karen Allen and Paul Freeman.

My cohost for this is Tom from episode 3 "Caddyshack". He is a childhood friend...

Watched It in the '80s Episode 9: Heathers

In Episode 9 of the podcast, my friend Jerry returns to discuss the dark comedy and cult classic "Heathers" starring Winona Ryder and Christian Slater.  This was the first major film for both writer Daniel Waters and director Michael Lehmann.
This movie reminds us of all the typical '80s high school cliques and how well they got along. Well....maybe it doesn't end well for some.

So grab a Super Slug and some corn nu...

Watched It in the '80s Episode 8: Family Ties Revisited Part 4

This is our Fourth and final episode revisiting Family Ties. In this one, Andy and I give our top 5 most memorable episodes of seasons 6 and 7.

The finale aired on May 14th 1989 and ended with more amazing on screen chemistry with Meredith Baxter-Birney and Michael J. Fox

I neglected to mention that Andy and I are recording in person for the first time so if the audio sounds a little different that's why. We are still fine tunin...

Watched It in the '80s Bonus Episode Friday the 13th

This is the first Bonus Episode of the podcast. Since it's Friday the 13th, I thought it best to podcast on the 1980 slasher film sharing the same name. My Cohost today is Jayme, and she shares her passion for horror with me as we cover "Friday the 13th" directed by Sean S. Cunningham and starring  Betsy Palmer and Adrienne King,


To submit feedback for this or future episodes, you can get in touch by our website, Email,...

Watched It in the '80s Episode 7: Family Ties Revisited Part 3

On this episode of Watched It in the '80s, my cohost Andy and I discuss our top 5 most memorable episodes of Family Ties seasons 4 and 5. There are definitely ones that will pull on your heart strings and cause you to shed a tear. Michael J. Fox shows his full range of acting talents again and again. We also welcome some recurring secondary characters in Andrew, Ellen and Nick.   And I "Pass the Clicker" to Andy, as we ...

Watched It in the '80s Episode 6: Family Ties Revisited Part 2

On a very special Watched It in the '80s.....My cohost Andy and I discuss our top 5 most memorable episodes of Family Ties seasons 2 and 3. And I "Pass the Clicker" to Andy, as we tell you what else is on TV on a Thursday night in the '80's opposite that dominant Thursday Night lineup on NBC,

Next episode will be out in a few weeks and we'll get into seasons 4 and 5.

Watched It in the '80s Episode 5: Family Ties Revisited Part 1

On a very special Watched It in the '80s.....
This is part 1 of a 4 part series focusing on the classic '80s sitcom Family Ties starring Michael J. Fox, Meredith Baxter, and Michael Gross. In this episode I talk about the cast and give my top 5 episodes of season 1

There is no cohost this week but my cohost from "Chariots of Fire" and "The Abyss", Andy, returns  next week to help he continue our coverage.

In Episode 4, my cohost Andy and I explore the depths of James Cameron's 1989 movie "The Abyss", which took home an Oscar for best visual effects.  This movie stars Mary Elizabeth Mastrantonio, Ed Harris, and Michael Biehn.

This was actually my first recorded podcast prior to  making some changes so the audio isn't as good as it could be.  Sincere apologies. Hope you enjoy!

To submit feedback for this or future episod...

Watched It in the '80s Episode 3 : Caddyshack

In this third episode of the podcast, I go back to the '80s and bring back a childhood friend, Tom. Actually I just asked him to join me with no time travel involved.  Tom and I talk about 1980's sports comedy " Caddyshack". This classic is filled with great comedic actors of the era including Bill Murray, Chevy Chase, Ted Knight, and Rodney Dangerfield. Not to mention Caddyshack was the first film directed by Harol...

Watched It in the '80s Episode 2 : Clash of the Titans

In Episode 2 of the podcast, my cohost Jerry and I talk about 1981's action/adventure/fantasy  film Clash of the Titans. Clash was written by Beverly Cross, directed by Desmond Davis, and was the final stop motion production for the effects master Ray Harryhausen. This movie had a great cast including Sir Laurence Olivier, Maggie Smith, Jack Gwillim, Burgess Meridith, and of course two young leads with Harry Hamlin and Judi Bow...

Watched It in the '80s Episode 1: Chariots of Fire

In this first episode, my friend Andy and I discuss the 1981 film Chariots of Fire which was written by Colin Welland  and directed by Hugh Hudson and won the Academy Award for Best Picture for that year.

To submit feedback for this or future episodes, you can get in touch by our website, Email, or following us on a few social media platforms:

Watched It in the '80s Trailer

Welcome to Watched It in the '80s. A podcast where we have fun discussions about movies and television shows from the 1980's.

Every two weeks, we'll go back in time to dive into a movie and discuss the cast, writers, and directors and what they are up to now. We'll pick some of our favorite scenes and quotes. We'll talk about how the film did at the box office, any awards it may have won, and also pick a take m...