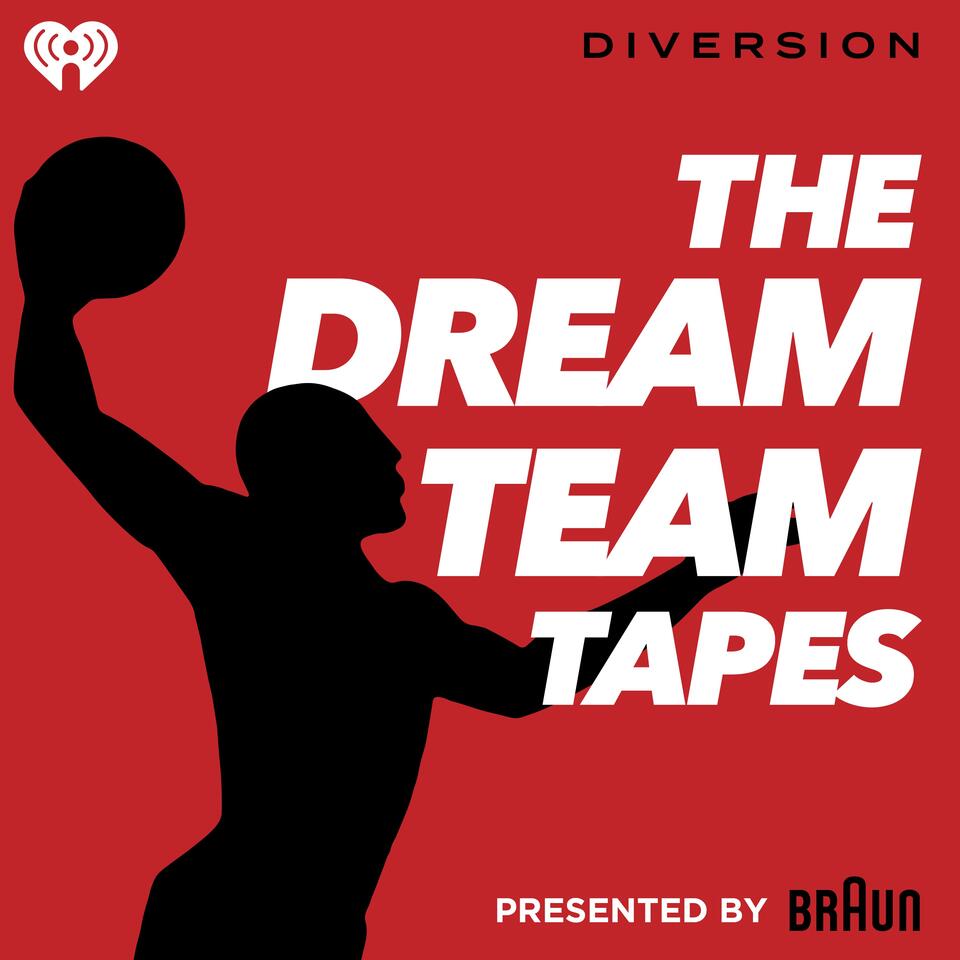 Season 1 was the #1 New Sports Podcast of 2020 and covered the greatest team in NBA history, the 1992 Dream Team that won Olympic gold in Barcelona. Hear the incomparable players in their own words, including Michael Jordan, Magic Johnson, Larry Bird, Charles Barkley, Scottie Pippen, Clyde Drexler, Karl Malone and the others. Renowned sportswriter and author Jack McCallum was there with the guys and brings us the thrilling memories, personal stories, and sometimes surprising anecdotes of the twelve historic players. Season 2 joining Jack McCallum with J.A. Adande for an epic examination of the incomparable 2008 US Olympic Men's Basketball Team and the legendary players that defined a new generation of NBA basketball. They talk to players and coaches including Carmelo Anthony, Phil Jackson, Jason Kidd, Chris Bosh, Robert Horry, Jerry Colangelo, Deron Williams, Mike Krzyzewski and more, bringing you an insider's study in athletic challenge, transformation, and ultimate victory. Assembling icons like LeBron James, Kobe Bryant, and Dwayne Wade, The Redeem Team composed the greatest single team since the superlative Dream Team of Jordan, Johnson, and Bird from 1992. The US team was in shambles following the rise of Olympic teams around the world and their humiliation at the 2004 Games. It was the gold medal in ’08 or total failure — there was nothing in between. What The Redeem Team achieved signaled a total rebirth of USA Basketball —and some would say basketball in general — whose legacy we are living out today.

The real story of the greatest team in NBA history, the 1992 Dream Team that won Olympic gold in Barcelona. Hear the incomparable players in their own words, including Michael Jordan, Magic Johnson, Larry Bird, Charles Barkley, Scottie Pippen, Clyde Drexler, Karl Malone and the others. Renowned sportswriter and author Jack McCallum was there with the guys and brings us the thrilling memories, personal stories, and sometimes surpris...

The real story of the greatest team in NBA history, the 1992 Dream Team that won Olympic gold in Barcelona. Hear the incomparable players in their own words, including Michael Jordan, Magic Johnson, Larry Bird, Charles Barkley, Scottie Pippen, Clyde Drexler, Karl Malone and the others. Renowned sportswriter and author Jack McCallum was there with the guys and brings us the thrilling memories, personal stories, and sometimes surpris...

Why I Had to Pull Out the Operation Card to Get Larry Bird (S1: E1)

Talking with Karl Malone in the space that amounted to his wildlife museum, strolling the streets of Spokane with hometown tour guide John Stockton, guilting Larry Bird into sitting still for an interview, and silently wondering why Clyde Drexler would suddenly start talking about why he was as good as Michael Jordan.

Throughout most of the 20th century, that our Olympic basketball teams were represented by college players was mandated not only by FIBA—which specifically forbade NBA players from participating—but also by our own hidebound tradition. Almost everyone in this country thought: The Olympics were for the college kids. But someone in another country, a Serbian named Boris Stankovic, thought differently. This is the story of how he chan...

The Cool Kids All Sign On...But They Don't Include Isiah (S1:E3)

The public was skeptical of top pros surrendering their summer to play Olympic basketball. That changed with a couple important early sign-ons, Magic Johnson among them. Also: why the selection committee ignored past transgressions of Charles Barkley, Larry Bird’s reluctance to participate because of an aching back, and the never-ending discussion of why Isiah Thomas was not a Dream Teamer.

Learn more about your ad-choices at http...
Share
Mark as Played

Barely two months after most of the Dream Team roster was announced, Magic Johnson seemed like he would have to drop out. The jaw-dropping news of Magic’s HIV diagnosis, the gradual resumption of his rightful place on the team, and some of the attendant controversies. Who was the real leader of the Dream Team? Magic? Bird? Or the team’s transcendent player, Michael Jordan? Look no further for the answers.

Learn more about your ad-...
Share
Mark as Played

It was a feeling like no other when the Dream Teamers took the court for a real game in the qualifying tournament in Portland. Hearts stopped when they first ran onto the court together—and, as a matter of fact, so did warm-ups, as the Dream Team competitors ceased layup drills to take photos. The Dreamers were excited to be playing with each other, and it showed in the wonderfully cohesive brand of basketball that they played. But...

The Greatest Game Nobody Ever Saw (S1:E6)

Ever since the book Dream Team was released in 2012, fans have been curious about the intrasquad scrimmage the Dream Teamers played in Monte Carlo, a few days before the Olympics began in Barcelona. “The Greatest Game Nobody Ever Saw” is what McCallum called that chapter in his book … even though he did see it on film. McCallum breaks it down, along with the phenomenon of the world’s most famous team hanging out in the world’s most...

The Dream Team reaches Barcelona and the circus never stops, featuring: The Charles Barkley elbow. The internecine battles between USA Basketball and USOC. The famous “Kukoc Game” in which Jordan and Scottie Pippen made life miserable for the Croatian and would-be Bull. The non-stop life force that was Jordan, and, most of all, the all-galactic level of behind-the-scenes trash talking that went on when the team got together in what...

Some of the Dream died quickly. Larry Bird retired right away. Magic’s HIV became big news again, a year later, Michael was gone…to baseball, after one of sports history’s most mysterious retirements. But what remains is the Dream Team’s enduring legacy, one many did not see while they were beating teams by fifty points. Their participation in the Olympic did exactly what Boris Stankovic said it would do—it grew the game around the...

Get a preview of Season 2 of the #1 New Sports Podcast of 2020. Sports journalist vets Jack McCallum and J.A. Adande take listeners through an insider's study of the 2008 US Olympic Men's Basketball Team and the legendary players that defined a new generation of NBA basketball, including Kobe Bryant, LeBron James, Dwayne Wade, and Jason Kidd. Season 2 features guests including Carmelo Anthony, Phil Jackson, Chris Bosh, Robe...

In an often-overlooked story, the 2008 US Men's Olympic basketball team made magic. Led by two NBA superstars, Kobe Bryant and LeBron James (who many thought couldn't play together) and coached by Mike Krzyzewski (a “college guy” many first dismissed as unable to handle pro players) the US overcame the stifling embarrassment of their 2004 showing and won a decisive gold victory in 2008. Hosts Jack McCallum and J.A Adande be...

The creation story of the 2008 Redeem Team begins in the residue of the 1992 Dream Team, as does the redemption story of Kobe Bryant, who played such an important role when he later not just joined the Redeem Team but played the pivotal role of "team energizer." Hosts Jack McCallum and J.A Adande examine the young Kobe — fresh out of high school, clueless in many ways about the NBA baskeTball game — and, with a lot of Zen M...

S2E3: The Future King and The Greek Tragedy

After a memorable 2003 NBA draft that included four eventual iconic champions that would enrich the 2008 Redeem Team including LeBron James, Carmelo Anthony, Dwyane Wade, and Chris Bosh, three of these young stars are thrust into the spotlight at the 2004 Olympics. The experience is anything but golden and the U.S. Olympic program arrives at a crossroads. On this episode you'll hear from Dwyane Wade (Redeem Teamer, 3-time NBA c...

With USA Basketball in shambles, they turn to "The Godfather," Jerry Colangelo, who proved to be instrumental in reviving the program. There are other "Great Men" with courage, intellect, and leadership that made The Redeem Team great, including of course Mike Krzyzewski, Kobe Bryant, and LeBron James, but the first Great Man to come along and change the course of USA basketball's history was Jerry Colangelo. Co...

We unlock the secret of why players like Carmelo Anthony, Jason Kidd and Chris Bosh buy into the coaching style of Mike Krzyzewski. Why, Coach K’s not some gentleman from Duke; he’s a swearing machine from the mean streets of Chicago.

While an injury keeps Kobe Bryant away from USA Basketball after his highest-scoring season, newly crowned champion Dwyane Wade joins LeBron James for version 1.0 of the Redeem Team. But trouble awaits in the semifinals of the FIBA World Championships.

LeBron James led a so-so team into the Finals during the regular season, but Kobe Bryant, by the measure of most, including Coach Mike Krzyzewski, is the league’s best player. So when Mamba joins the Redeem Team in the summer of 2007, which one is really in charge on the court? Starring Chris Bosh, Phil Jackson, Anthony Carmelo, Deron Williams, Coach K, Jason Kidd.

Learn more about your ad-choices at https://www.iheartpodcastnetwo...
Share
Mark as Played

In the days leading up to the 2008 Games, Kobe Bryant gets away (barely) with tardiness but not with questionable shot selection. Once in Beijing, Yao Ming hits an opening shot heard throughout the land, but the U.S. at last gets the chance to flex its Olympic muscle.  Starring Chris Bosh, Coach K, Craig Miller, Jason Kidd, Carmelo Anthony, Jerry Colangelo.

As the Redeem Team tears through the Beijing Olympics, we meet some of the lesser-knowns on the team, like Tayshaun Prince and Michael Redd; deconstruct the quarterbacking and athletic brilliance of LeBron James and even ponder the relative merits of Whitney Houston vs. Mariah Carey, Olympians in their own way. Interviews with Jerry Colangelo, Chris Bosh, Deron Williams, Jason Kidd, Carmelo Anthony, Jim Boeheim, Craig Miller and Mi...